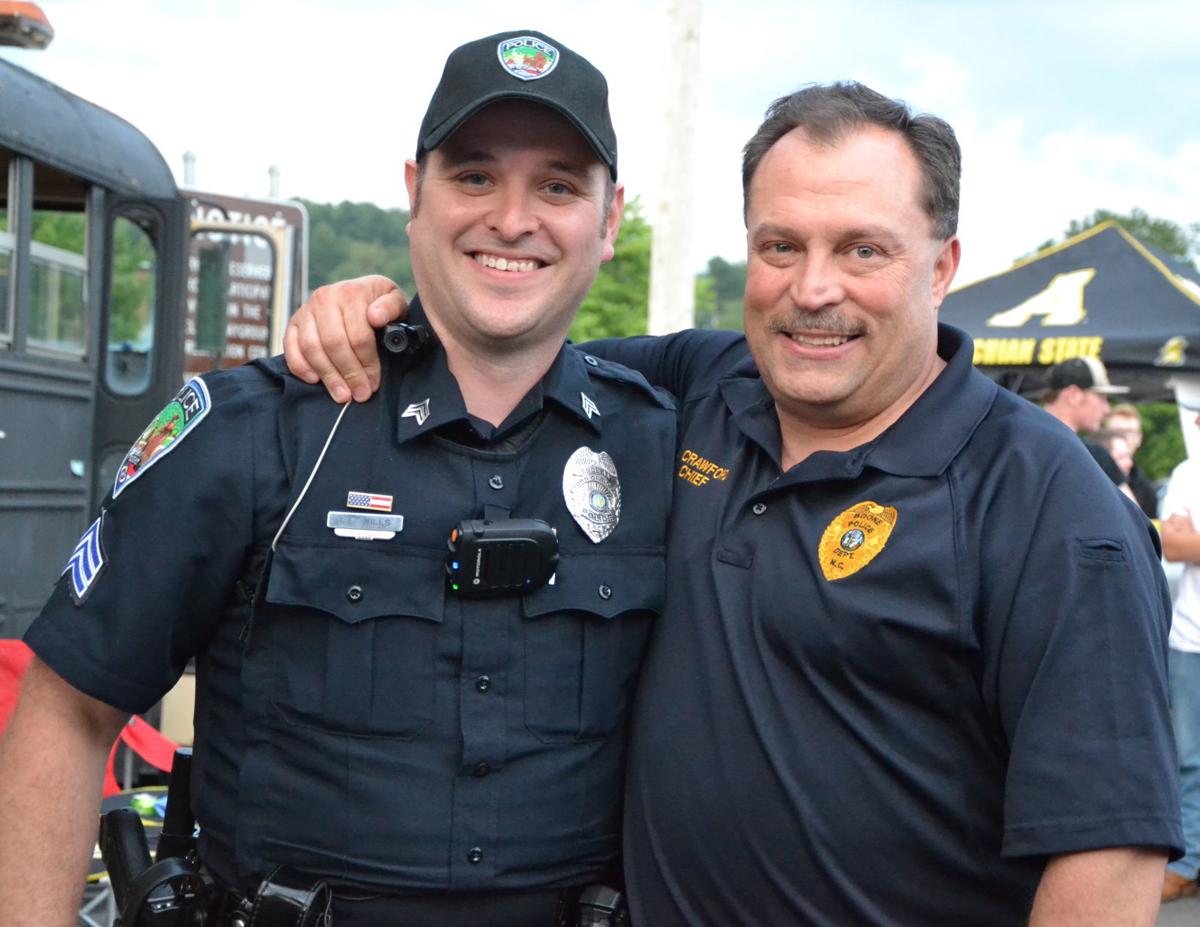 Boone Police Officer Lance Wills, left, joins Police Chief Dana Crawford after Wills won the opportunity to use a stun gun on Crawford for a demonstration. 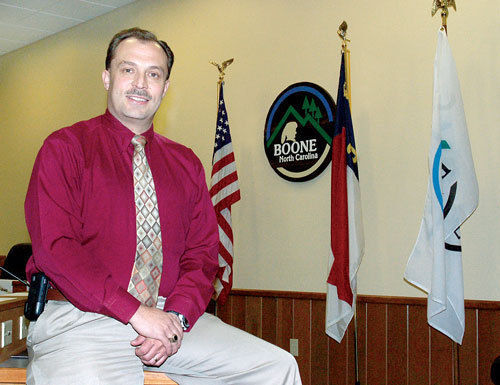 Dana Crawford is hired as Boone Police chief in 2009. 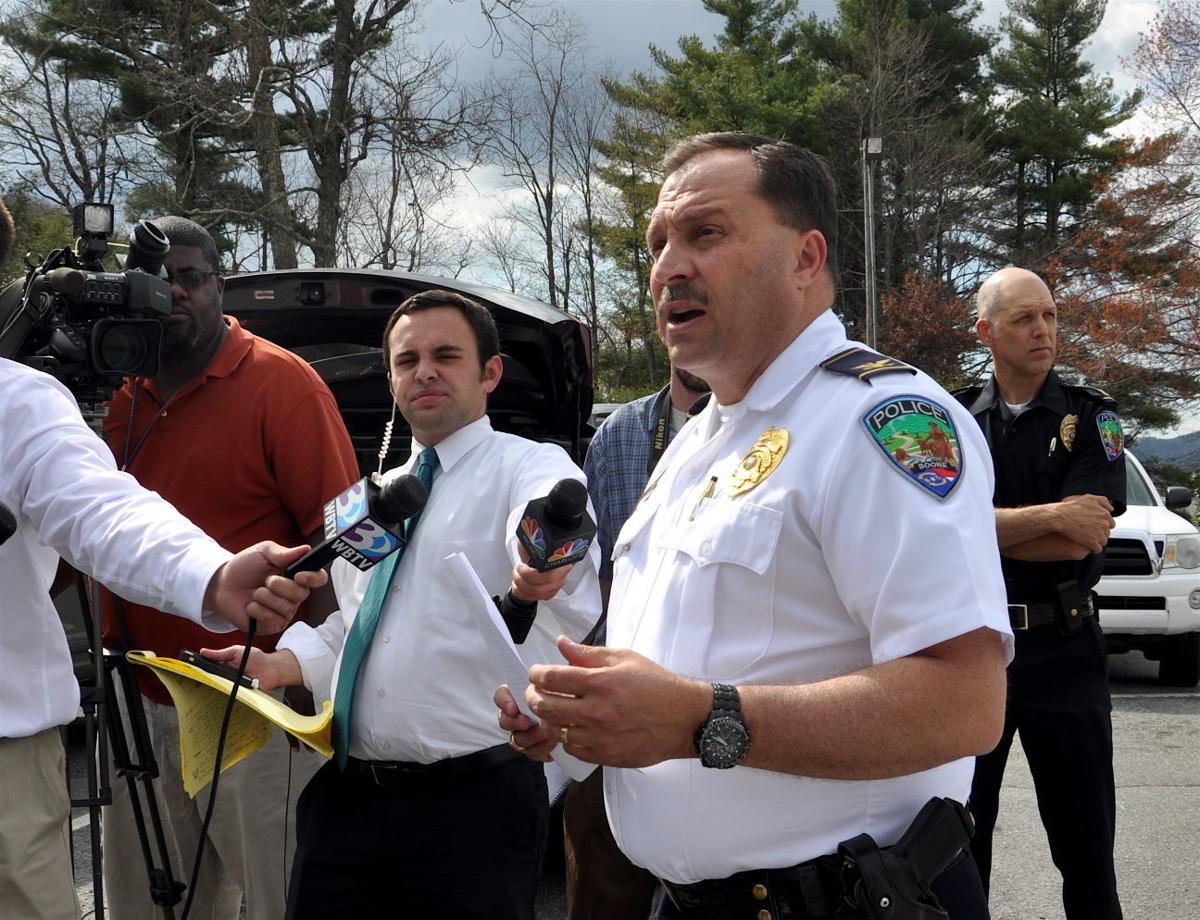 Boone Police Chief Dana Crawford speaks with members of the media at a press conference in 2016. 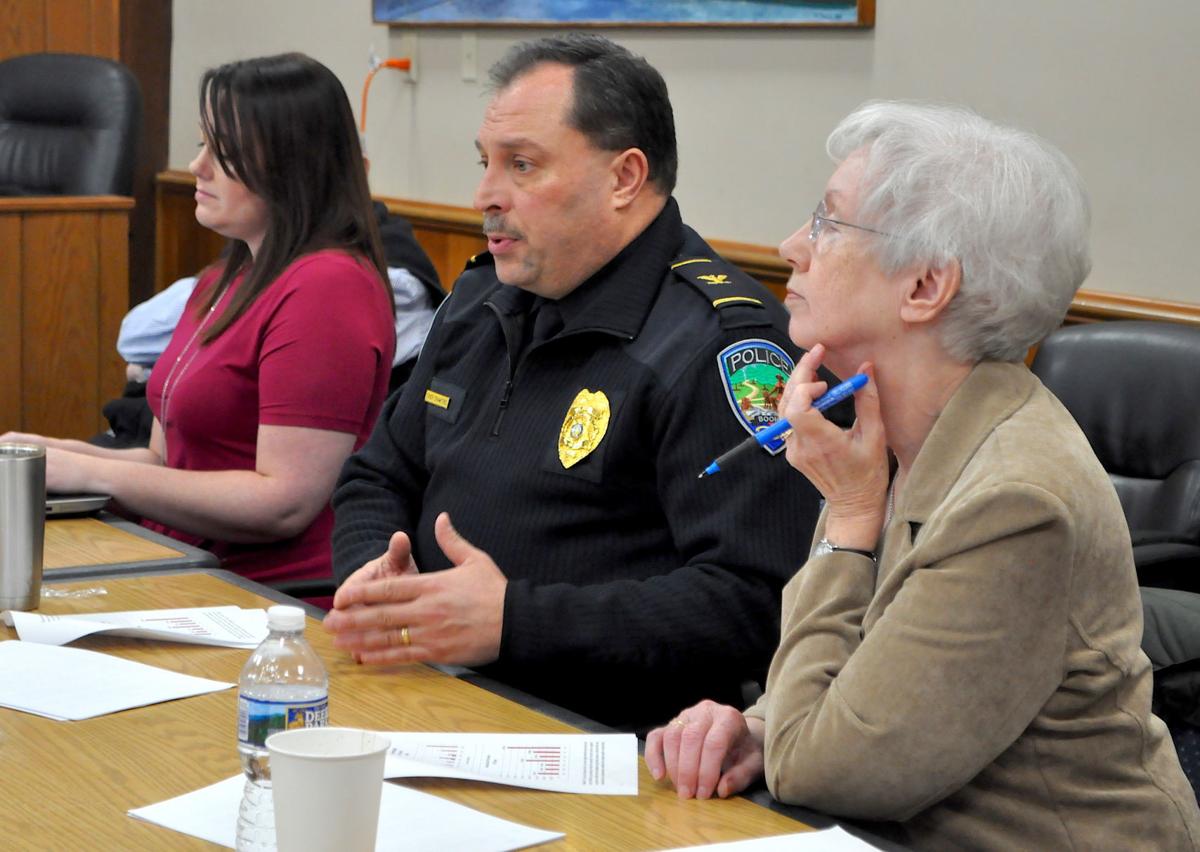 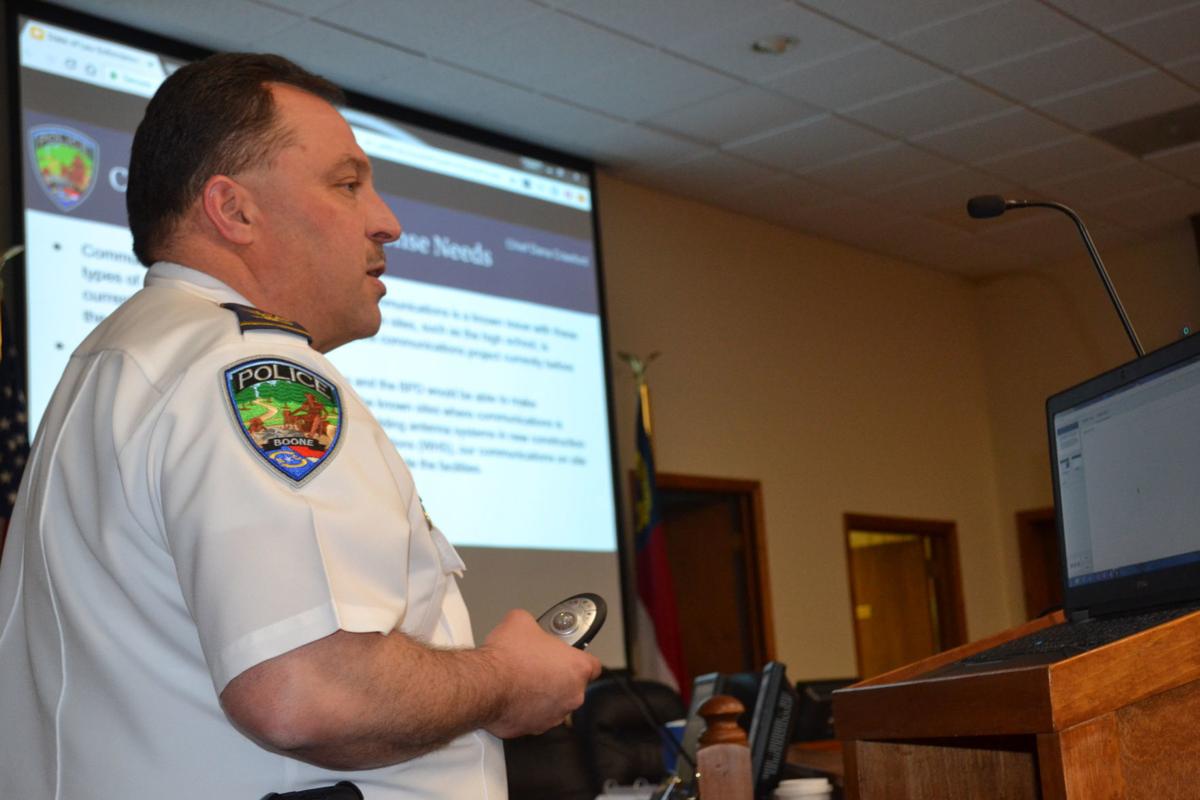 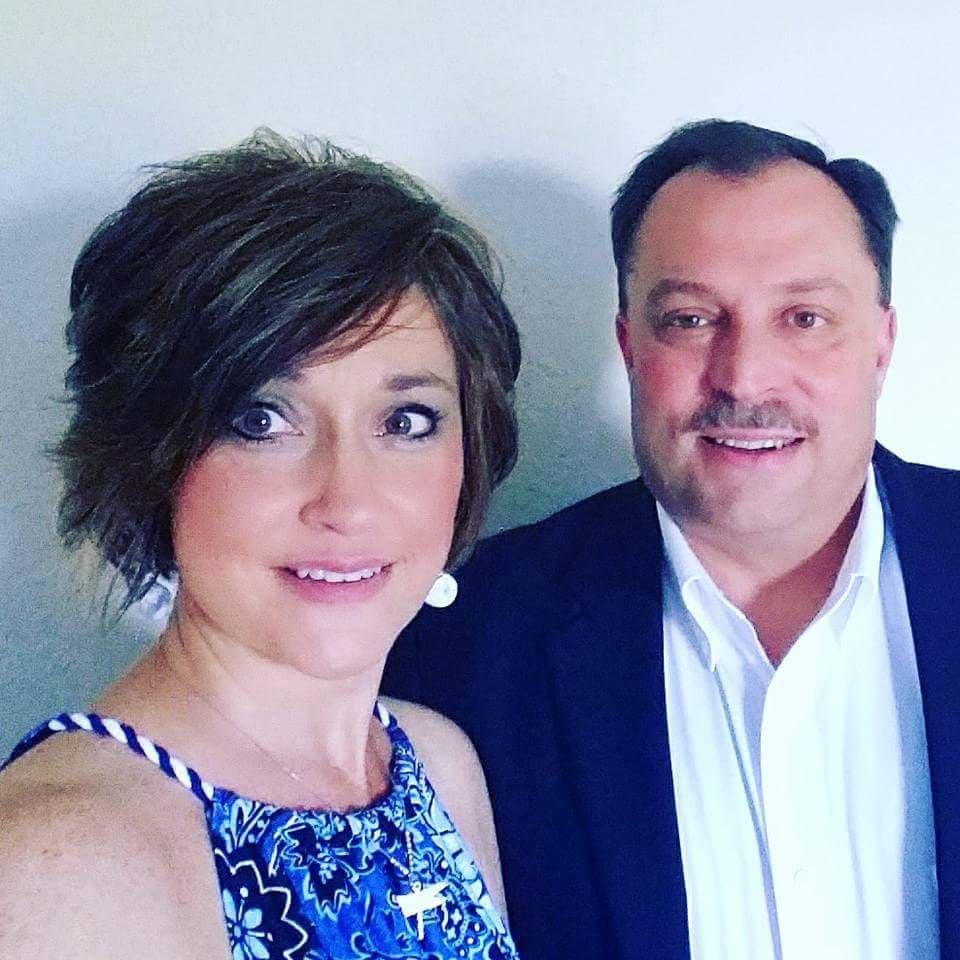 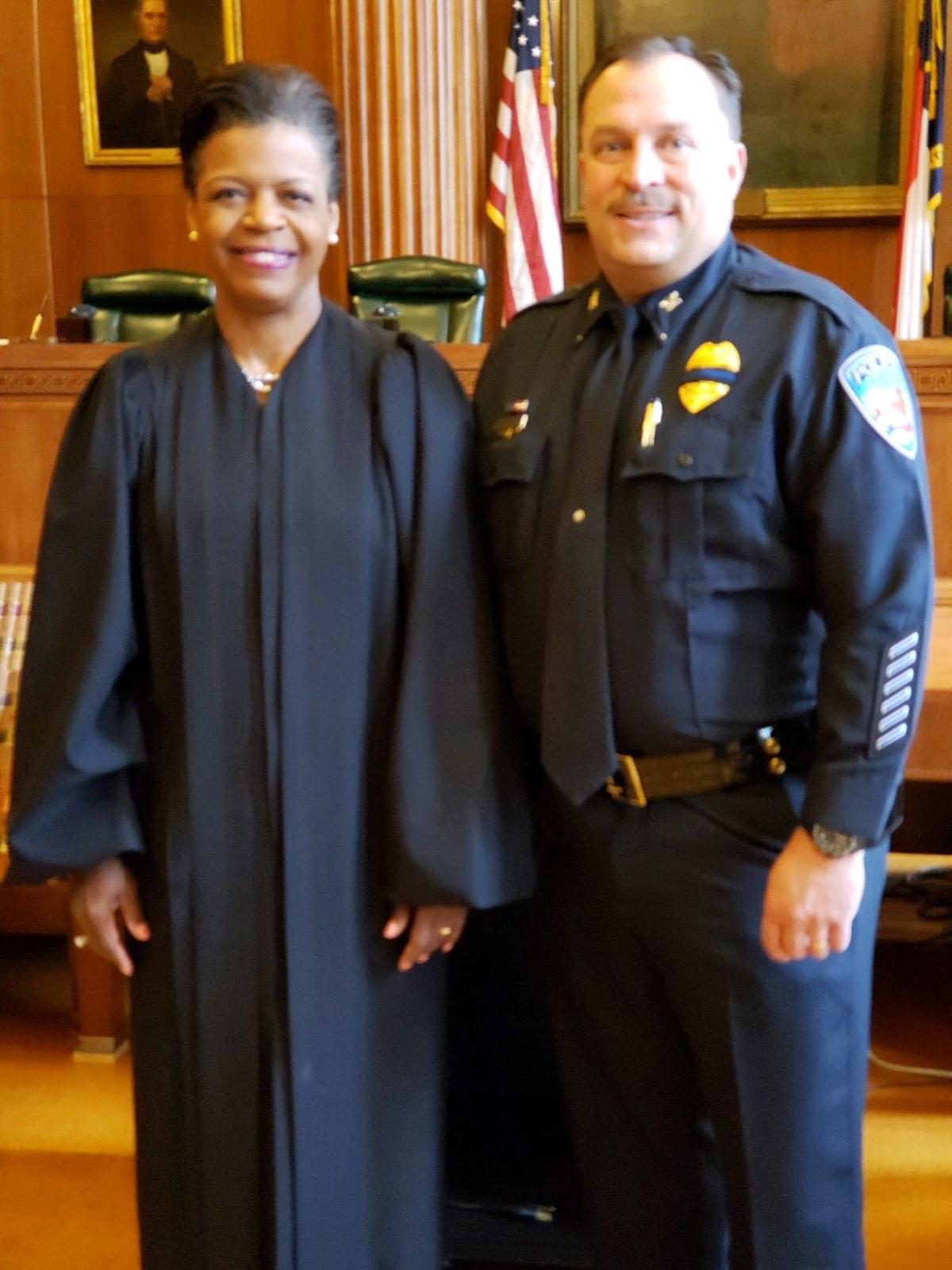 Boone Police Officer Lance Wills, left, joins Police Chief Dana Crawford after Wills won the opportunity to use a stun gun on Crawford for a demonstration.

Dana Crawford is hired as Boone Police chief in 2009.

Boone Police Chief Dana Crawford speaks with members of the media at a press conference in 2016.

After 32 years in law enforcement and the last 10 spent as the chief of the Boone Police Department, Dana Crawford is taking his career in a new direction.

In a March 26 memo to Boone Town Manager John Ward, Crawford explained that he was retiring from Boone Police effective May 1 to accept a position as the director of Basic Law Enforcement Training at Mayland Community College in Spruce Pine.

”This position will allow me to stay involved in the law enforcement community in Western North Carolina and the ability to impact the training and professionalism standards for law enforcement officers in this area,” Crawford said in his message to Ward. “I truly feel that it is time for me to do something a little different with new challenges and opportunities.”

Ward said that Crawford’s professionalism will be missed in Boone, but that it was reassuring to know that he would be educating future police officers.

”I have greatly enjoyed working with Chief Crawford and I have appreciated his dedication to our community,” Ward said.

Ward said he would evaluate the best procedure for filling the position as the chief’s retirement nears, and that if an interim chief is needed, a decision would be made in advance of Crawford’s retirement date.

Crawford was born and raised in Avery County alongside his two siblings. Throughout his childhood and into high school he played baseball, football, basketball and was involved with Boy Scouts. He had a few family members in law enforcement, and said he had even taken a criminal justice class in high school.

“I didn’t like bullies,” Crawford said. “I didn’t like people getting picked on. I wanted to protect the victim. That carried over into, ‘hey, I could do this as a career.’”

Crawford said it was important for him to remain in the area as his family has roots in Avery and Watauga counties that go back to the 1800s. He said his life is now coming full circle, as he will be teaching in the very criminal justice and law enforcement training program at Mayland that he graduated from in 1988. Crawford went on to work as a deputy sheriff in Avery County, and then in 1990 worked for the Sugar Mountain Police Department for about a year and three months.

The next 18 years were spent at Beech Mountain Police Department, where he started as a patrol officer and later moved through the ranks as sergeant, an investigator position and was then eventually promoted to captain and assistant chief.

During his last two years at Beech Mountain, he attended Lees-McRae College to obtain a bachelor’s degree. He graduated from the college in 2009, and a short time later was hired to the Boone Police chief position. The hiring process for the position took place from May until October 2009, and Crawford was chosen out of 125 applicants from across the U.S. To obtain the job, Crawford said he had to appear in front of various boards, make presentations, complete an interview and participate in a role-playing exercise.

Crawford stepped into the role after the retirement of former Police Chief Bill Post, who served in the role for 10 years and is now a lecturer in criminal justice at Appalachian State University. Crawford said the department has undergone changes in the last 10 years, such as rebranding of its patrol vehicles and uniform patches as well as gaining new equipment. Boone Police Capt. Andy Le Beau said Crawford was responsible for many of the advances that the department has made in the past decade.

“One of the most significant contributions that Chief Crawford made is that of equipping our department with modern tools for police work — including body cameras, patrol rifles, in-car computers and new radios,” Le Beau said. “Almost all of our equipment was obtained with grants at no or little expense to the town of Boone.”

Additionally, Crawford said when he came to Boone Police, there was a mass exodus of retirees, and he has since spent time bringing in new people and developing the department. Le Beau said he and others were always included in the hiring process and that the department searched for quality employees.

Le Beau said he worked with Crawford on a regular basis, and knew him to be an honest man who just wanted to do the right thing.

“So many times when we would be contemplating how best to handle a situation he would say ‘just do the right thing,’” Le Beau said. “He did live and work by a strong set of moral values.”

Under his leadership, Crawford said he feels he shared with the department the understanding of what it meant to be a true public servant. He said he wanted his officers and staff to be caretakers of the community, and not oppressors.

“One of my mentors in law enforcement told me many years ago, ‘The person you’re actually working for is the guy that’s home in bed tonight,’” Crawford said. “That stuck with me all these years. That’s who I’m working for. He’s the one going out every day and he’s trying to make a living, put food on the table and raise a family, and he trusts me to come out here and work for him. That’s service. I want to do the best I can to keep his family safe at night. (It’s) my job to instill that principle into our officers.”

As he prepares to leave his post as chief, Crawford said criminal cases he helped to solve will be ones that he takes with him. The cases where the community would be watching to see how police responded, and knowing his department saw the cases through were the ones that were unforgettable to him.

“I took them home with me. I would dwell on them, think about them and stress about them,” Crawford said. “When you get that one break, and you solve that case or get that confession — those were very memorable moments for me.”

Le Beau said it wasn’t uncommon to find Crawford in the criminal investigations unit trying to solve a case or doing other tasks like walking around dusting furniture. Le Beau recalled that Crawford’s first day as chief he was out with patrol officers chasing armed robbery suspects. Crawford just wanted to be hands on, Le Beau said.

The day following his message to Ward, Crawford sent a letter to his officers and staff at the Boone Police Department. In his letter, Crawford explained that he had been eligible for retirement for two years, but had not been emotionally ready to leave.

”My love for this agency and all of you has made this a very agonizing decision,” Crawford stated to officers and staff. “The hardest part of this retirement will be leaving you. You are not only my coworkers, but you are also some of my dearest friends. I will miss that the most.”

The decision to retire was one he spent several months contemplating, and one that was not made in response to the current COVID-19 pandemic, Crawford said. He stated that he understood that the timing of the career move was less than optimal, but that he needed to jump on the job opportunity while it was being offered. He added that he has offered to serve in an advisory capacity after his retirement date and be available for the duration of the crisis until Ward deems otherwise.

Crawford said Boone Police makes a point to continually train those coming up in the ranks and to be planning for succession. A large portion of his job has been to develop officers for advancement and his replacement, he said. Crawford said it was time for others at the department to take on new roles.

”I will be able to leave with the confidence that Boone Police Department is in great shape and has some great leaders to carry on,” Crawford in his statement to officers and staff. “Boone PD is not a building or a thing. It is an organization that is made up of some of the finest, most talented, ethical, highly trained individuals anywhere.”

Le Beau said he wanted to reassure the community that the department will be just fine moving forward, and said Boone Police wished Crawford well in the next chapter of his life.

When he is not at work, Crawford said he enjoys spending time with his wife and two children, going camping, being outside, playing golf and serving at his church — Fall Creek Baptist. He also likes to visit places with historical significance; his favorite historical location he’s visited is the Gettysburg battlefield in Pennsylvania. He loves networking with new law enforcement officers, and is excited to be teaching the future generations in the field.

BOONE — The town of Boone announced on April 29 that Boone Police Capt. Andy Le Beau is being promoted to the position of interim chief of pol…