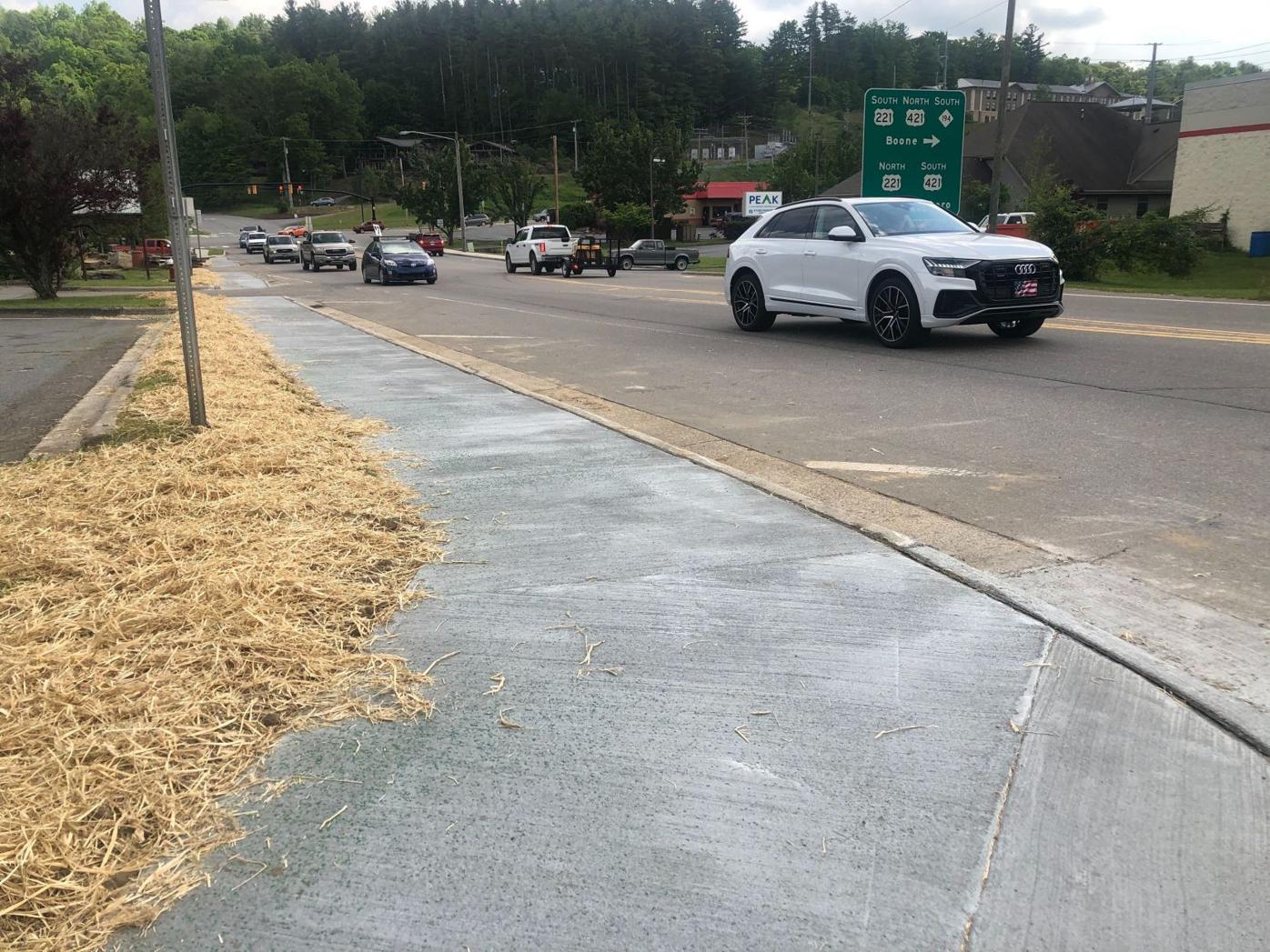 Town of Boone staff recently began installation of the first section of a new sidewalk that is hoped to extend from the intersection of U.S. 421 and N.C. 194 to the entrance to Hardin Park School. 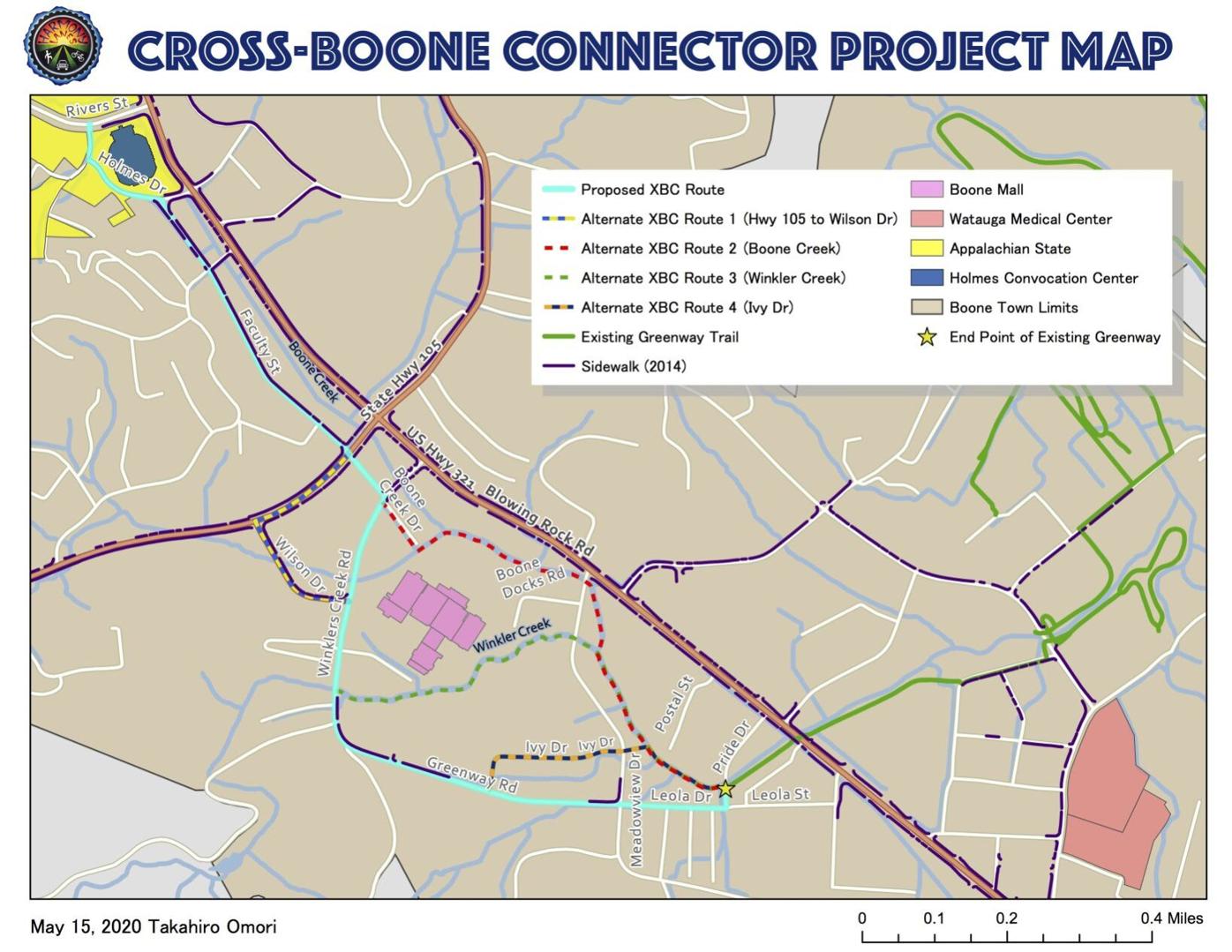 Several routes are being explored for the proposed Cross Boone Connector, which would connect the end of the existing Boone Greenway at Pride Drive near Walmart to the Appalachian State campus and downtown Boone via a protected multi-modal path.

BOONE — Town of Boone staff this week began installation of the first section of a new sidewalk that is hoped to extend from the intersection of U.S. 421 and N.C. 194 to the entrance to Hardin Park School.

The project has been a town priority since January 2019, when multiple parents and residents signed a petition and spoke at a council meeting about safety concerns in the area, as many parents park offsite and walk their students to and from the school.

The town has worked since then to secure agreements with property owners, including Triplett and Coffey and Perkinsville Baptist Church, for easements allowing a town sidewalk to be constructed along the east side of the road.

The east-side sidewalk would extend to a planned “HAWK” crosswalk on the northern end of the Perkinsville Baptist Church property. A “HAWK” crosswalk would be similar to existing crossings on Hardin Street and on N.C. 105, with buttons allowing pedestrians to activate a stop signal for vehicular traffic.

The N.C. Department of Transportation last year approved $50,000 for the crosswalk installation, but Ward said last month that the funding is currently on hold. NCDOT announced on May 4 that due to COVID-19 impacts on revenues, it had fallen below the statutorily mandated “cash floor” of $293 million. According to state law, once the department falls below the cash floor, the department can no longer enter into new contracts that spend money on transportation projects.

From the crosswalk, the sidewalk would then extend on the west side of N.C. 194 to the Hardin Park entrance. Ward said that additional easements are still needed to complete the project.

The project has been a major focus for the nonprofit Harmony Lanes, a group that formed in early 2019 to advocate for the Hardin Park effort and that has since gone on to advocate for additional safe, inclusive multi-modal transportation opportunities in the Boone area.

“Harmony Lanes really appreciates the community members like John Ward, Kevin Shawn Coffey of KSC properties, Perkinsville Baptist Church and all the town staff and council who are increasing safety for Hardin Park students by moving this project forward,” said Dave Freireich, a leader of the group.

At the May 19 Boone Town Council meeting, Freireich and Appalachian State graduate student Takahiro Omori, who has assisted Harmony Lanes with planning for the multi-modal paths, appeared to present concepts for additional multi-modal paths in Boone, and the council voted to endorse Harmony Lane’s proposed Cross Boone Connector (XBC).

The XBC would connect the end of the existing Boone Greenway at Pride Drive near Walmart to the Appalachian State campus and downtown Boone via a protected multi-modal path. Several possible routes are being explored.

Another route would direct the path along Boone Creek. Boone Town Councilperson Sam Furgiuele said he would prefer to see the path follow the creek, but noted that easements from private property owners would be required.

“This idea has been in the works since the early ‘90s,” Freireich said in a statement after the vote. “Several new technical trends as well as the Boone parking and traffic problems and apartment and business growth in the Boone Valley (Blowing Rock Road corridor) are now making it a more urgent need than ever.”

“The XBC will serve ASU students and town citizens who would like to navigate all of Boone without using a car,” he added. “When complete the XBC would also connect the completed Middle Fork Greenway all the way through Boone and to the future Northern Peaks Trail.”