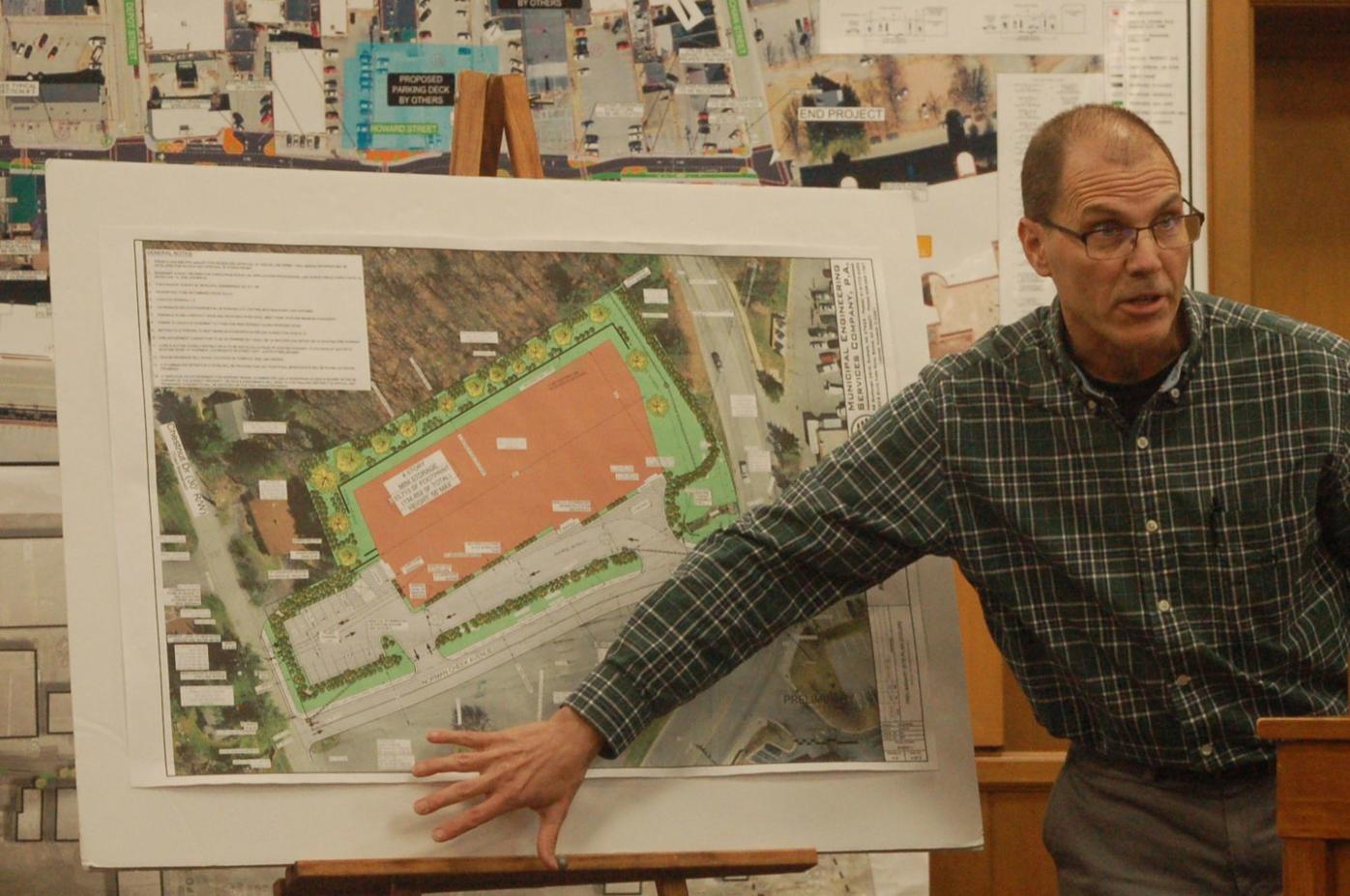 Mark Nuessmeier, a neighbor to the proposed Save Green Self Storage facility, speaks about traffic impacts to the nearby intersection during a Boone Board of Adjustment hearing on Monday, Jan. 13. Nuessmeier supported the project. 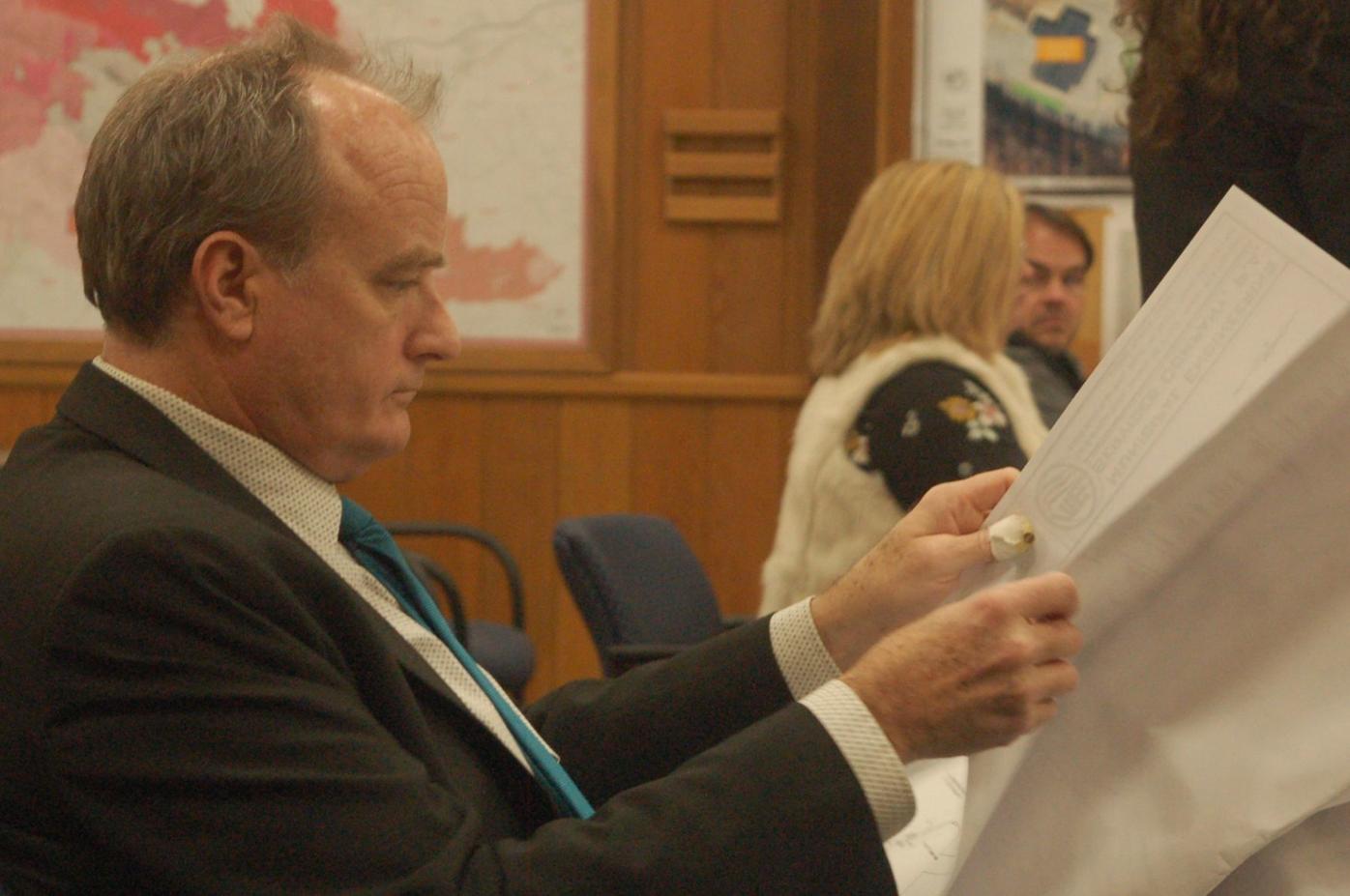 Michael Trew looks at a blueprint of the proposed Save Green Self Storage building during a Boone Board of Adjustment hearing on Monday, Jan. 13. 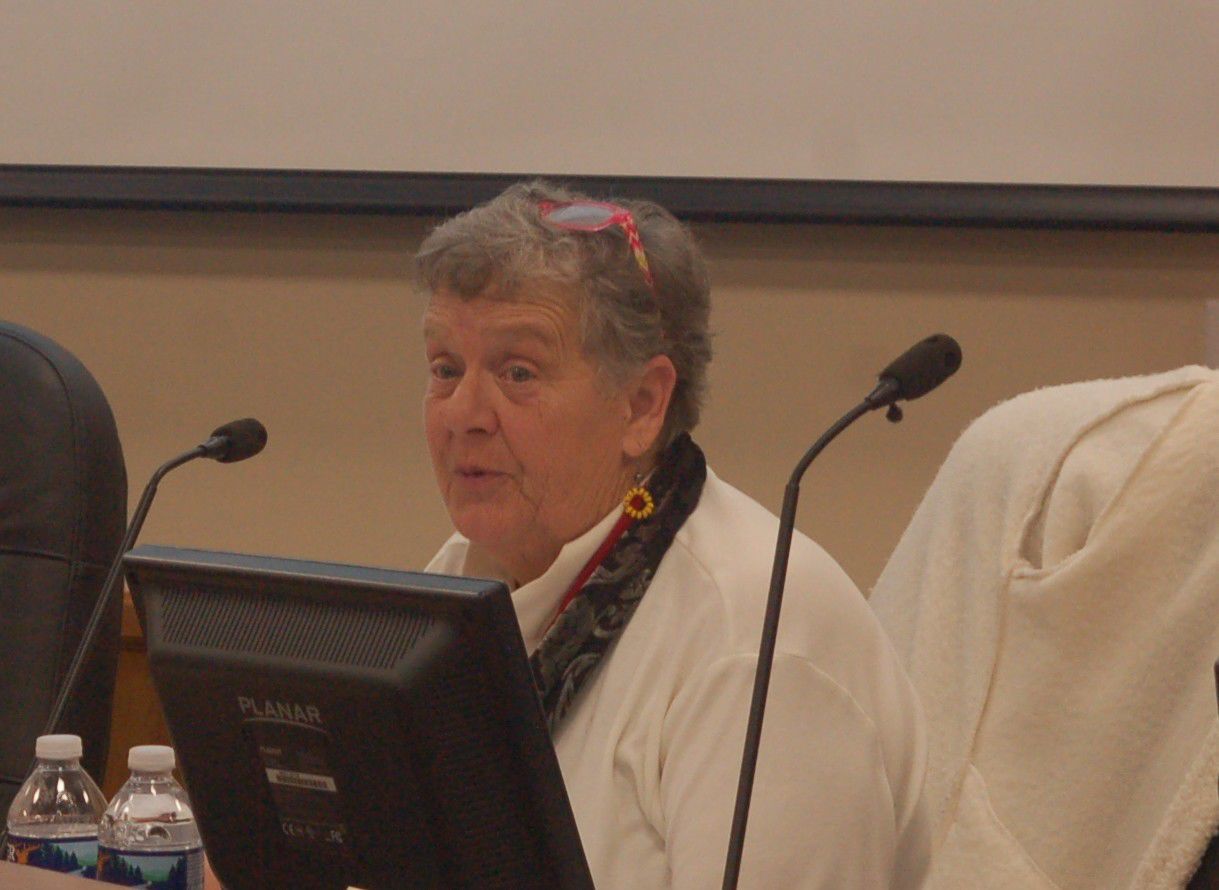 Boone Board of Adjustment member Pam Williamson speaks during a hearing on the proposed Save Green Self Storage facility on Monday, Jan. 13. 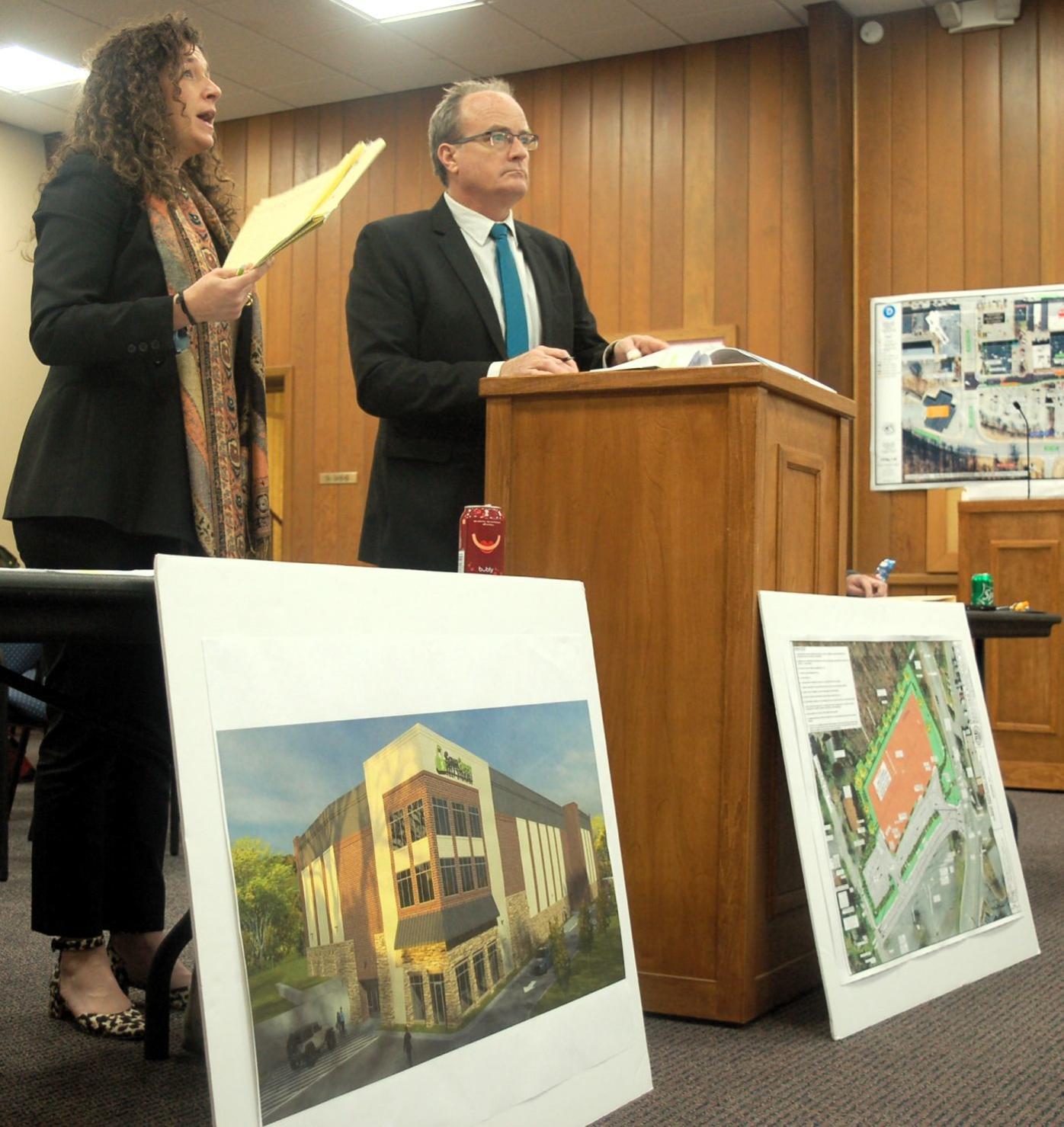 Attorney Chelsea Garrett, left, and witness Michael Trew, right, speak during the Save Green Self Storage facility hearing in front of the Boone Board of Adjustment on Monday, Jan. 13. In front of the two are renderings and footprints for the proposed facility.

Mark Nuessmeier, a neighbor to the proposed Save Green Self Storage facility, speaks about traffic impacts to the nearby intersection during a Boone Board of Adjustment hearing on Monday, Jan. 13. Nuessmeier supported the project.

Michael Trew looks at a blueprint of the proposed Save Green Self Storage building during a Boone Board of Adjustment hearing on Monday, Jan. 13.

Boone Board of Adjustment member Pam Williamson speaks during a hearing on the proposed Save Green Self Storage facility on Monday, Jan. 13.

Attorney Chelsea Garrett, left, and witness Michael Trew, right, speak during the Save Green Self Storage facility hearing in front of the Boone Board of Adjustment on Monday, Jan. 13. In front of the two are renderings and footprints for the proposed facility.

BOONE — After a quasi-judicial hearing that lasted nearly five hours, the Boone Board of Adjustment voted 4-1 to grant a special use permit for a four-story storage facility on the former Modern Toyota of Boone property at the intersection of East King Street and New Market Boulevard.

The applicant, Robert High of Robert High Development in Wilmington, proposed a Save Green Self Storage facility that would cost approximately $7.5 million to build. The 990 storage units are planned to cover 134,852 square feet over the four stories and provide 14 parking spaces plus two loading areas. The footprint of the building would be approximately 31,000 square feet, Boone Planning Director Jane Shook noted.

High is seeking to purchase the land, which is currently owned by Sky Country LLC out of West Jefferson. High owns and operates several Save Green locations across North Carolina and is planning on building more in Asheville and South Carolina, he said during the hearing.

One of the carrots offered by High is the potential construction of a new street to connect Chestnut Drive and New Market Boulevard, which has the support of the neighbors. The road would give the Hillcrest and Councill Oaks neighborhoods a way to get to the East King and New Market traffic stop. The street is planned to be named after former parcel owner Norman Cheek. Donna Bare, managing member of Sky Country, previously told the Watauga Democrat that Cheek was her father and she said she is in support of the road and would donate half of the land for its construction.

Board members Andy Brooks, David Welsh, Rich Crepeau and Charles Lentz voted in favor while Pam Williamson voted against, claiming the project didn’t meet the standards to protect the surrounding neighborhood from noise and visual pollution, as well as thinking there would be added traffic to the area.

The final approval came with the conditions that the project incorporate recommendations by town staff, a traffic impact analysis and a culvert analysis presented as part of the hearing.

Welsh said he hopes High will work with the town on making the building look more “mountainous” to make it look consistent with other local commercial buildings.

Williamson said many of the documents presented came with no testimony to their credibility and described them as hearsay with “lots of contradicting evidence.”

“What we’ve got here is a piece of property that we’re trying to get the most number of units onto a property we can squeeze on,” Williamson said. “I do not feel like we have received competent and credible evidence that that neighborhood has been protected.”

As explained by Boone town attorney Allison Meade, the burden of proof was on the applicant to show that the property complied with the town’s UDO, did not materially endanger the public health or safety, will not substantially injure the value of adjoining or abutting property, will be in harmony with the area in which it is to be located, will be in general conformity with the Boone Comprehensive Plan and all other relevant plans officially adopted by the town and meets transitional zone standards.

Mike Trew, an engineer from Municipal Engineering, along with several neighbors, said that people cut through the paved lot all the time from Chestnut Drive to New Market Boulevard in order to avoid having to turn on East King Street. Due to the median installed when East King Street (U.S. 421) was widened, multiple neighbors said that legally, they have to U-turn at the N.C. 105 Extension intersection and then turn left back onto New Market Boulevard in order to get to New Market Centre or go down to Hardin Park School.

Attorney Chelsea Garrett of Boone-based firm Di Santi, Watson, Capua, Wilson and Garrett presented the case on behalf of High, calling several witnesses to testify. Garrett said there was a neighborhood meeting held in late October that she said went very well, with all who attended generally in favor.

When asked by Williamson about the size of the project, High said that a 990-unit facility will help it become profitable and noted the self-storage industry is trending toward bigger, climate-controlled units.

Office hours would be 9 a.m. to 5 p.m. Monday through Saturday and 9 a.m. to 4 p.m. on Sundays and facility access for customers would be available from 6 a.m. to 10 p.m. seven days a week, High said. Regarding abandoned storage lockers, High said that Save Green auctions are now conducted online.

Trew said that the project would add no more traffic issues to the area, saying many cars that pass through already cut through the parking lot.

Local appraiser James Milner testified that he doesn’t believe there are any adverse affects to the neighboring residential properties. Boone’s Urban Design Specialist Brian Johnson said that the town will negotiate with High on the appearance of the building to meet the town’s minimum standards, which was a point of contention brought up by neighbor Mark Nuessmeier.

During public comment, residents Summers, Nuessmeier, Carolyn Ward and Donna Lillian all said that a self-storage facility is about as good a use of the property for their wellbeing as it could be. There were no public comments offered opposing the project, and the speakers noted that they hadn’t heard any opposing views from neighbors.

“You’re talking about a minor impact of people unloading a truck before leaving,” Ward said.

A previous version of this article incorrectly stated the footprint of the proposed building. The building is proposed to have a footprint of more than 31,000 square feet.

That's a lot of acers. "Save the Green"? Catchy. It's not hard to figure who they are pandering to. Of course the board approved it. More tax money for bigger government in a university town where that university dictates the terms and conditions of the lives of the people within its reach.

If my math is correct, at 31k acres, this facility will be nearly 8x larger than Boone.