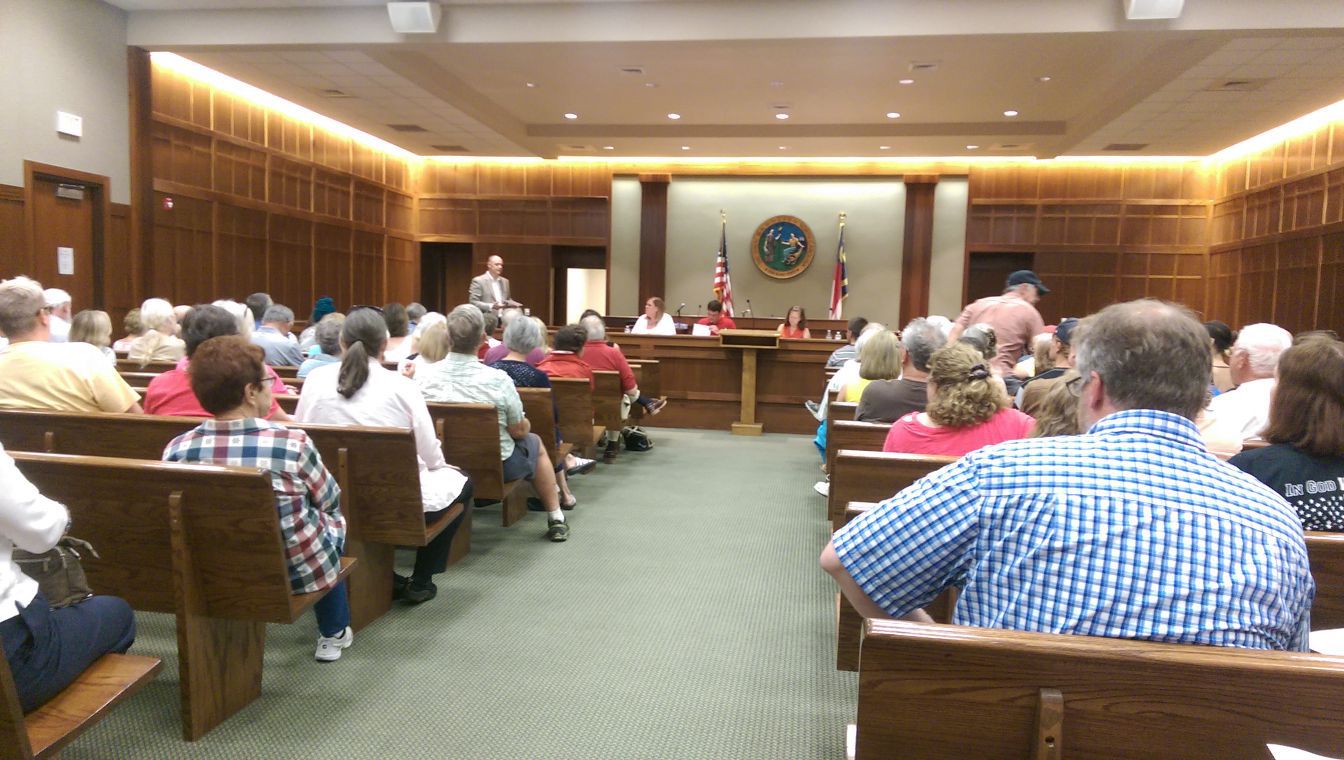 Elections Director Matt Snyder addresses a July meeting of the Watauga County Board of Elections. 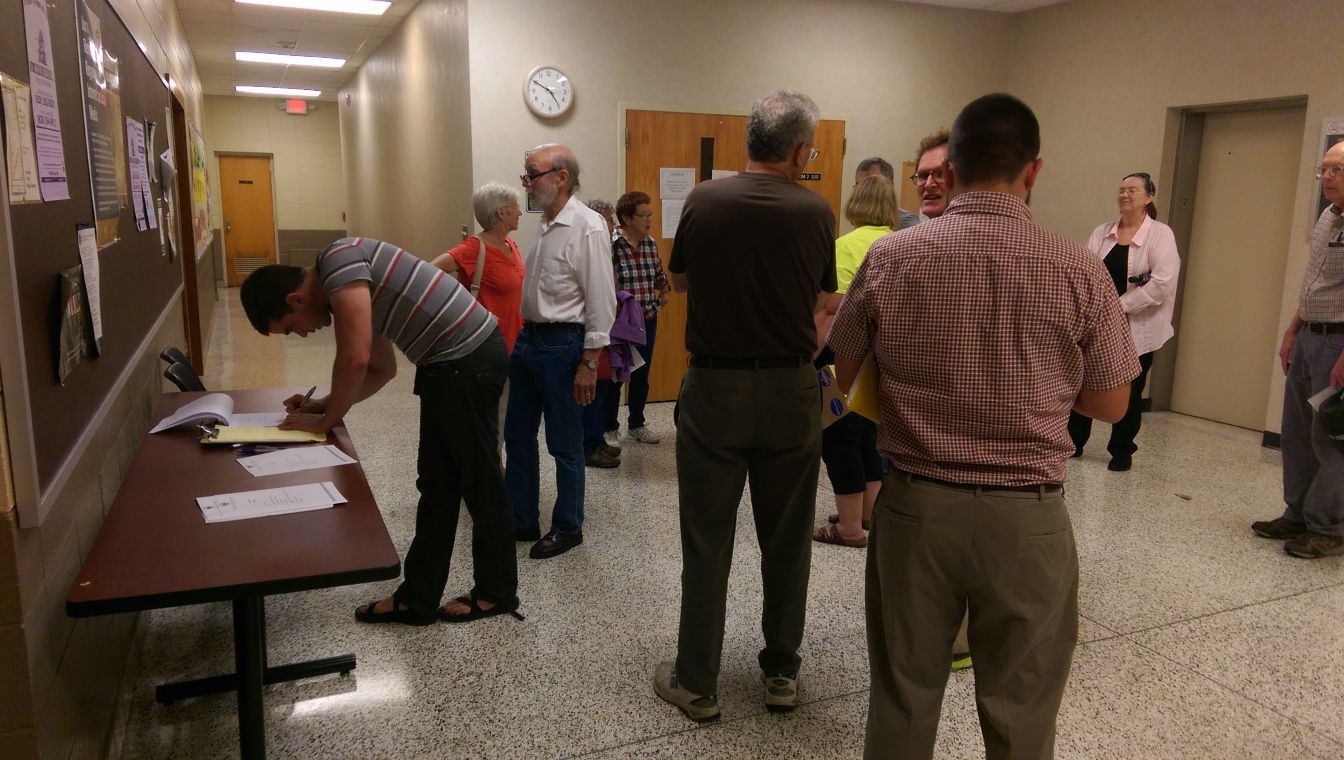 A line formed at the public comment sign-up sheet, as 30 people expressed their wish to address election board members.

Elections Director Matt Snyder addresses a July meeting of the Watauga County Board of Elections.

A line formed at the public comment sign-up sheet, as 30 people expressed their wish to address election board members.

BOONE — The Watauga County Board of Elections was unable to come to a unanimous decision July 12 in its vote to set an early voting plan for the November general election.

Board Chairman Bill Aceto a Republican, submitted a plan that would include Legends as a one-stop early voting site on the Appalachian State University campus to replace the site at the Plemmons Student Union.

Board Secretary Nancy Owen, a Republican, voted in favor of the plan, but Democratic elections board member Stella Anderson voted against.

Since the board was unable to come to an unanimous decision, the plan must now be sent to the North Carolina State Board of Elections, which will recommend a solution based on the “geographic, demographic and partisan interests of that county.”

Watauga County was forced to go through the same process in 2014 when board members were unable to unanimously agree on an early voting plan for that election.

More than 50 people were in attendance at the elections board meeting Tuesday and 30 signed up to speak at the meeting.

The board heard comments from community members and students in support of retaining the early voting site at the student union.

Jalyn Howard, the incoming ASU student body president, said that in his opinion the student union site had no problems during the last primary.

“Through my experience, the early voting site (at ASU) was very successful,” Howard said. “We only recommend the student union. I don’t see anywhere else on campus that will be suitable. I don’t think there is any other solution to this problem — the administration and the students have said: ‘The student union is it.’”

App State student Elaina Doyle said that, like many others, she cast her first-ever ballot at the Plemmons Student Union.

“I am proud to say that the ASU student union was the first place that I exercised my right to vote,” Doyle said. “The student union site is important to students, but it is also utilized by faculty and staff who use that site, as it is most accessible. I hope that we can put aside partisanship and continue to use this site.”

“I have worked with students for many, many years. and I find them to be sincere and informed,” Boone Town Councilwoman Loretta Clawson said. “They deserve the most convenient place to vote. Staff votes at the student union, faculty votes there, I vote there, it is a very used venue. I support the rights of the students to have the right to vote in a convenient place.”

Two residents of Beech Mountain addressed the board with concerns about rural Watauga residents’ access to convenient polling locations.

“I live 24 miles one way to the nearest poll,” said Beech Mountain resident Barabra Piquet. “Why can’t students, who are young and healthy, walk to another site just minutes from campus when the taxpayers of Beech Mountain have to drive an hour to vote? Legends as a one-stop site is good for all county residents — not just students.”

Watauga County Republican Party Chairman Nathan Miller said that Legends was a superior polling site, as it was located on a “corridor” and not a “side-street” like the student union.

Miller also said that it was impossible to police Plemmons to prevent electioneering.

Democratic congressional hopeful Sue Counts spoke in support of the continuation of the Plemmons Union site.

“It is my hope to leave here this evening with a renewed sense of gratitude to this board for putting the founding ideals of this great nation ahead of petty partisanship,” Counts said.

Elections board to meet again on early voting plan

BOONE — The Watauga County Board of Elections is set to meet Aug. 15 to attempt for a second time to settle on a one-stop early voting plan fo…

Any objective analysis will show Legends is a more appropriate site. The precious snowflakes can walk a few extra steps.

The blind… leading the blind… time after time…

Think for yourselves, folks. Legends is a better location with better parking. Shouldn’t even be a discussion.

If it isn't broken why fix it. Republican agenda not fooling anyone. Once again the state has to come tell the local Republican party nope. Embarrassing leadership for that party, you can't silence an entire group of people. We all know the Union is the most centrally located voting site for students.

If it isn't any big deal and we should stop bickering than just leave things alone. The Union was a perfect voting site as was evident by the huge numbers of people who used it to place their votes there in the past. Why change something that has been working for the community it serves. Feels like someone in the Watauga Republican party is scared of what college students have to say about the future of their country and their current town. Once again the local Republicans have pushed an entirely transparently self serving agenda that isn't fooling anyone and now the State has to tell them no.

Aren’t there other things that are more important to solve than whether the student union building or Legends is an appropriate voting site? It should NOT matter one way or another. Sheesh. Y’all are making our town look like a bunch of idiots.

to call legends a nightclub is a bit of a stretch. Owned by App state. Christian groups meet in there as well. personally i feel like legends is much easier to get in and out of for watagua residents. plus if a student can't walk the extra two-three minutes to legends they shouldnt have had the right to vote in the first place hahaha. completely agree with barbara, and just wanted to point out that legends is still on campus. makes your point even better. also electioneering happens at the student union, not that i think its a huge deal though. but at the end of the day... we got bigger issues to worry about...

Legends has a decent parking lot - the student union does't have much parking at all. Take legends and run with it. Let's stop the bickering.

Unclear why Watauga Republicans are intent on using a nightclub as the early voting site for Appalachian State. No case was made for why this would be easier or safer for people to vote here over Plemmons Student Union, the most popular voting site in the last election.

A question for Bill Aceto and the Republicans - why have public comment if there will be no consideration of the comments prior to the presentation of the plan? Why are Republicans so dismissive of the public?

And Mr. Aceto - really, your rudeness is appalling in a public official. Please be aware that you serve the public.... not just your party.

The problem with Republicans locally, statewide, and nationally is that they place party over country. They consider every issue as us vs. them, either/or, my way or no way. Big business loves it because the uninformed fall for faulting our governmental system and privatization is pushed like a miracle drug.