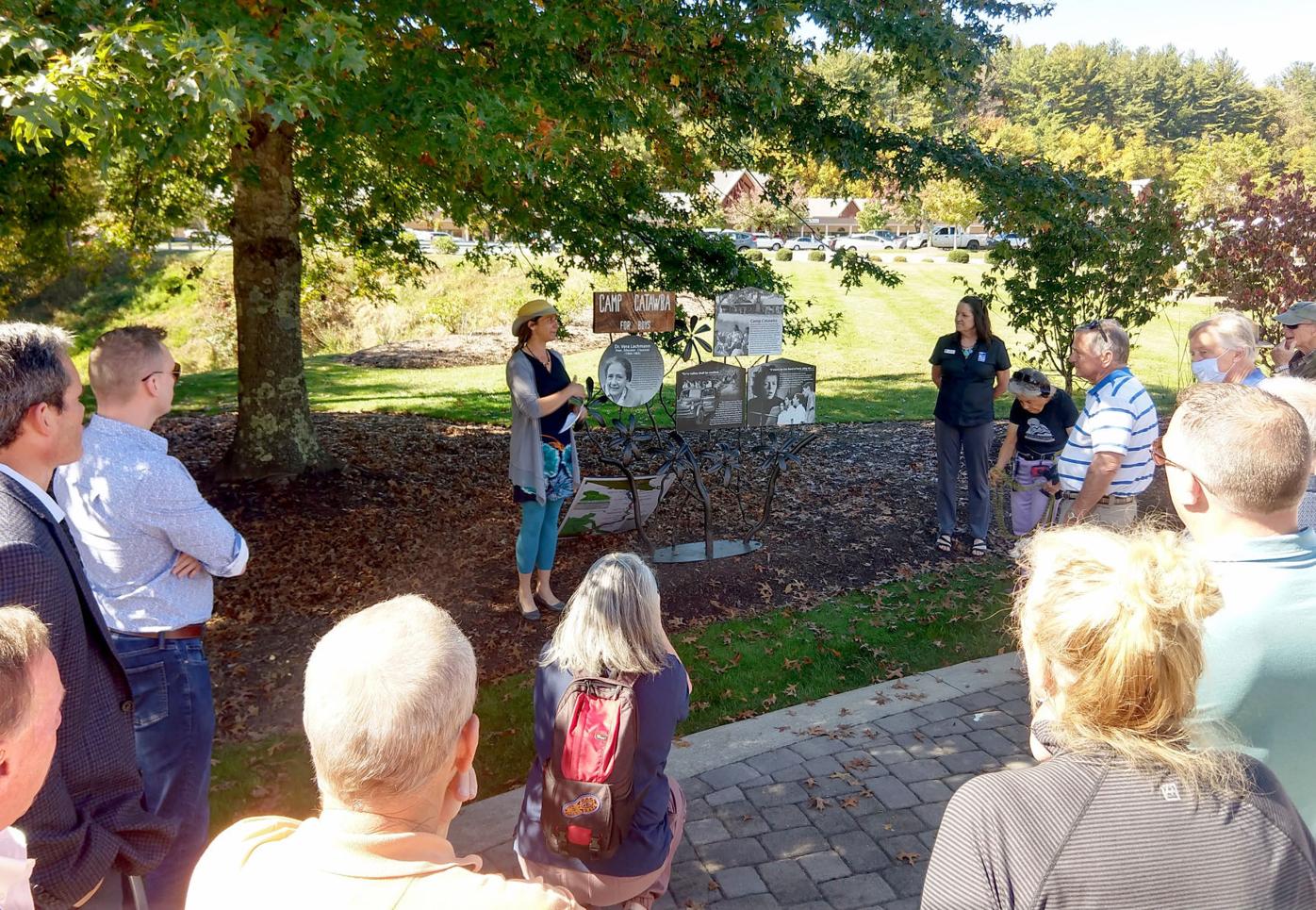 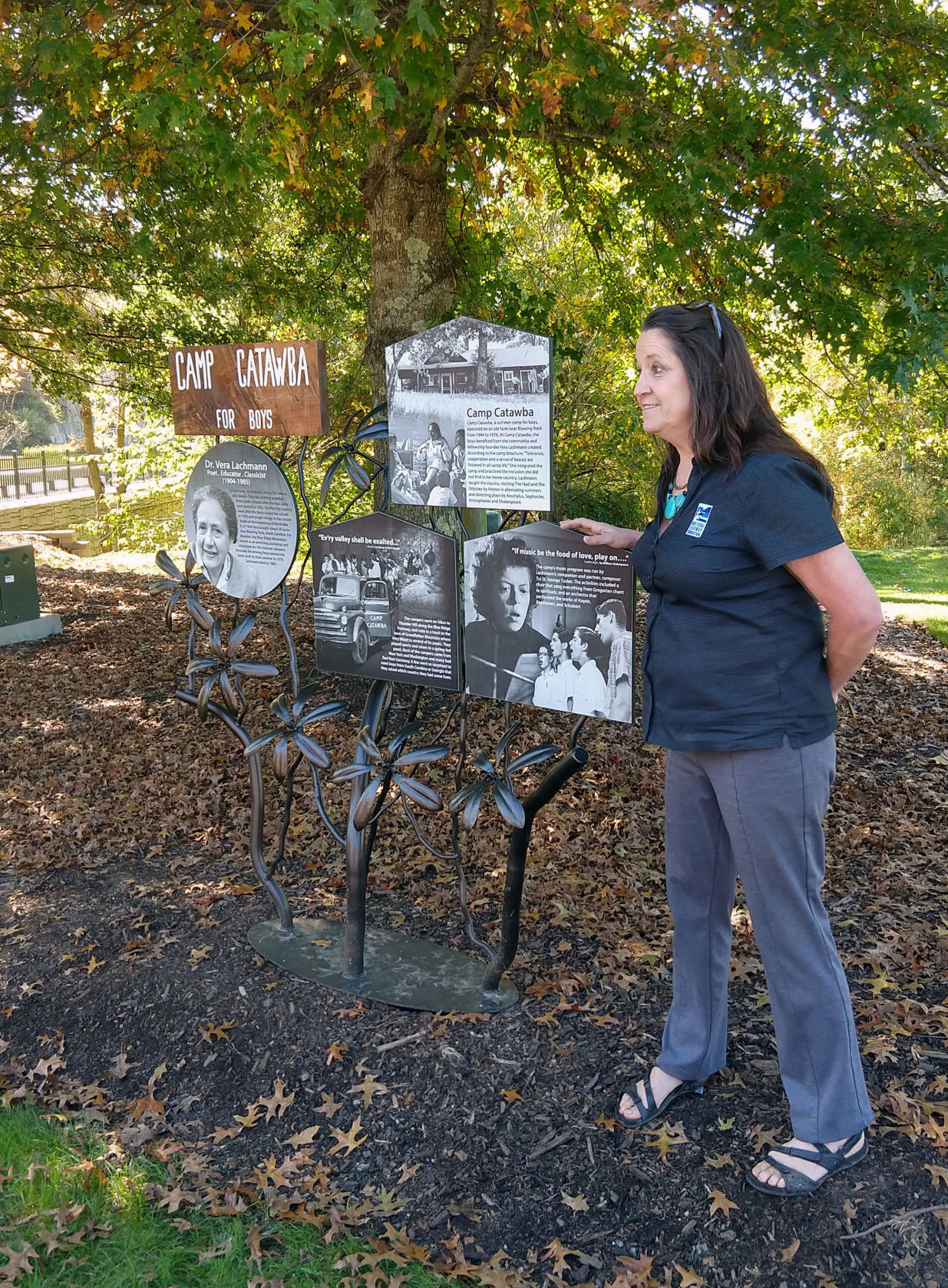 Blue Ridge Parkway Director Carolyn Ward describes the historical research and work that went into the sign's design and the story of the camp. 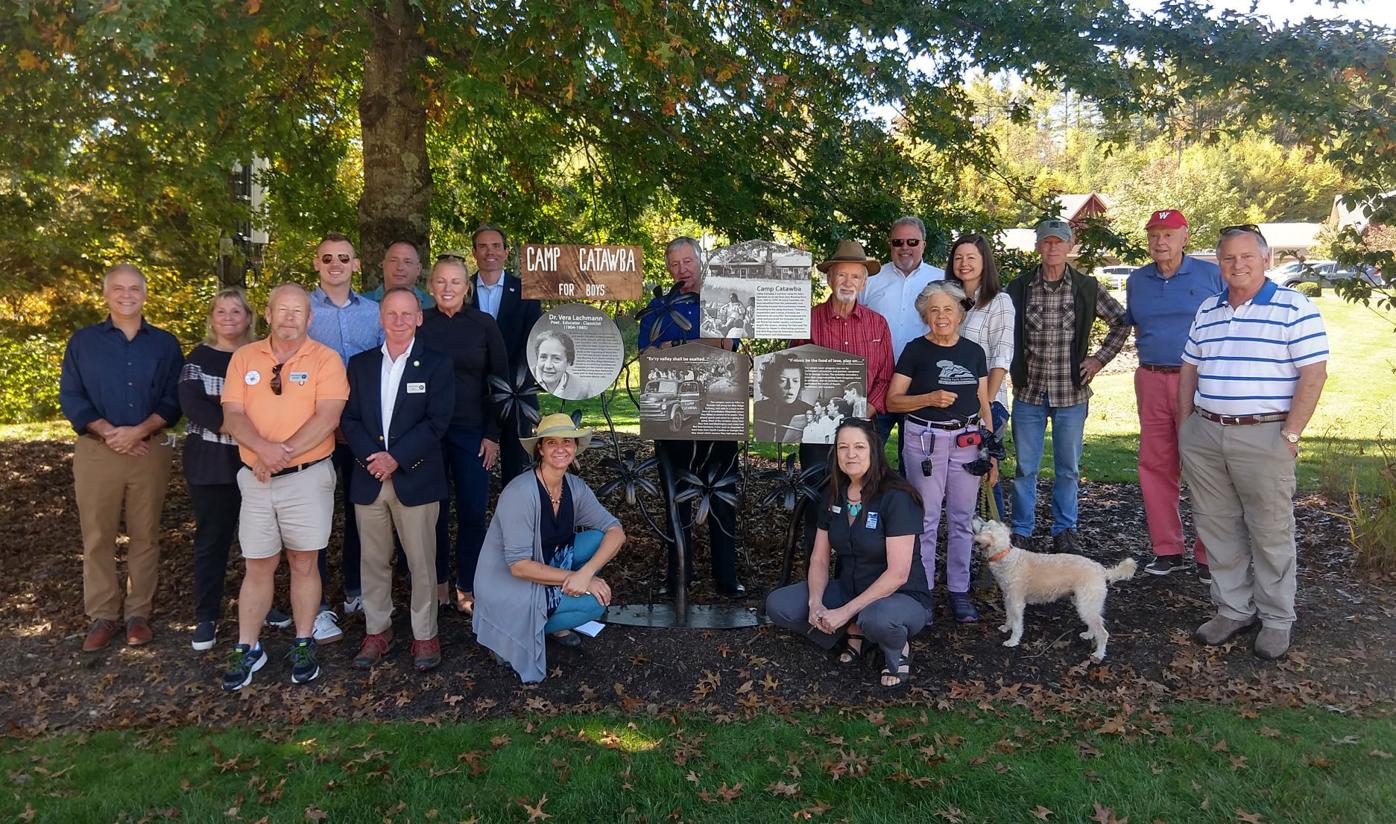 Local supporters of the Middle Fork Greenway and of historical conservation efforts joined the Blue Ridge Parkway Foundation and Blue Ridge Conservancy on a glorious Friday afternoon to celebrate the installation of the commemorative Camp Catawba sign.

Blue Ridge Parkway Director Carolyn Ward describes the historical research and work that went into the sign's design and the story of the camp.

Local supporters of the Middle Fork Greenway and of historical conservation efforts joined the Blue Ridge Parkway Foundation and Blue Ridge Conservancy on a glorious Friday afternoon to celebrate the installation of the commemorative Camp Catawba sign.

Installed near the trailhead of the Middle Fork Greenway in front of the Tanger Outlets, the sign outlines the history of the boys’ summer camp, which operated on a farm in Blowing Rock from 1944 to 1970. This one of a kind sign, funded by the Blue Ridge Parkway Foundation, was fabricated by local metalsmith Aaron Bishop of Snake Mountain Iron Works.

Lachmann, born in Germany, started a school for Jewish and Jewish-Christian children expelled from public schools after the Nazi party took control in 1933. She fled the country soon after the Nazis closed her school in 1939, and sought refuge in the United States at the beginning of World War II. In 1944 Vera bought about 20 acres near Blowing Rock. For decades, the Blue Ridge Mountains served as an enriching backdrop and classroom for the summer campers. Vera was the driving force behind the camp until its final summer in 1970. Lachmann died in 1985.

According to Wendy Patoprsty, Director of the Middle Fork Greenway, “Honoring the memory of Camp Catawba along the Middle Fork Greenway makes sense because Dr. Vera Lachmann's vision goes hand in hand with what Blue Ridge Conservancy's mission is today - to provide outdoor access to enhance residents and visitors quality of life.”

At Camp Catawba, the boys benefitted from the community and fellowship founder Vera Lachmann created. According to the camp brochure, “Tolerance, cooperation, and a sense of beauty are fostered in all camp life.” Lachmann integrated the camp and practiced the inclusion she did not find in her home country. Lachmann taught the classics, reciting "The Iliad" and "The Odyssey" by Homer in alternating summers and directing plays by Aeschylus, Sophocles, Aristophanes and Shakespeare.

The camp’s music program was run by Lachmann’s companion and partner, composer Tui St. George Tucker. The activities included a choir that sang everything from Gregorian chant to spirituals, and an orchestra that performed works of Haydn, Beethoven, and Schubert.

The campers went on hikes to Thunder Hill along the Blue Ridge Parkway and rode in a truck to the base of Grandfather Mountain where they hiked to several of its peaks. They played sports and swam in a spring-fed pond. Most of the campers were from New York and Washington and many had fled Nazi Germany, and a few were so surprised to meet boys from South Carolina or Georgia that they asked which country they had come from.

To read more about Camp Catawba, visit the Blue Ridge Parkway foundation website to read an account from a former camper at bit.ly/3j8RJsX.