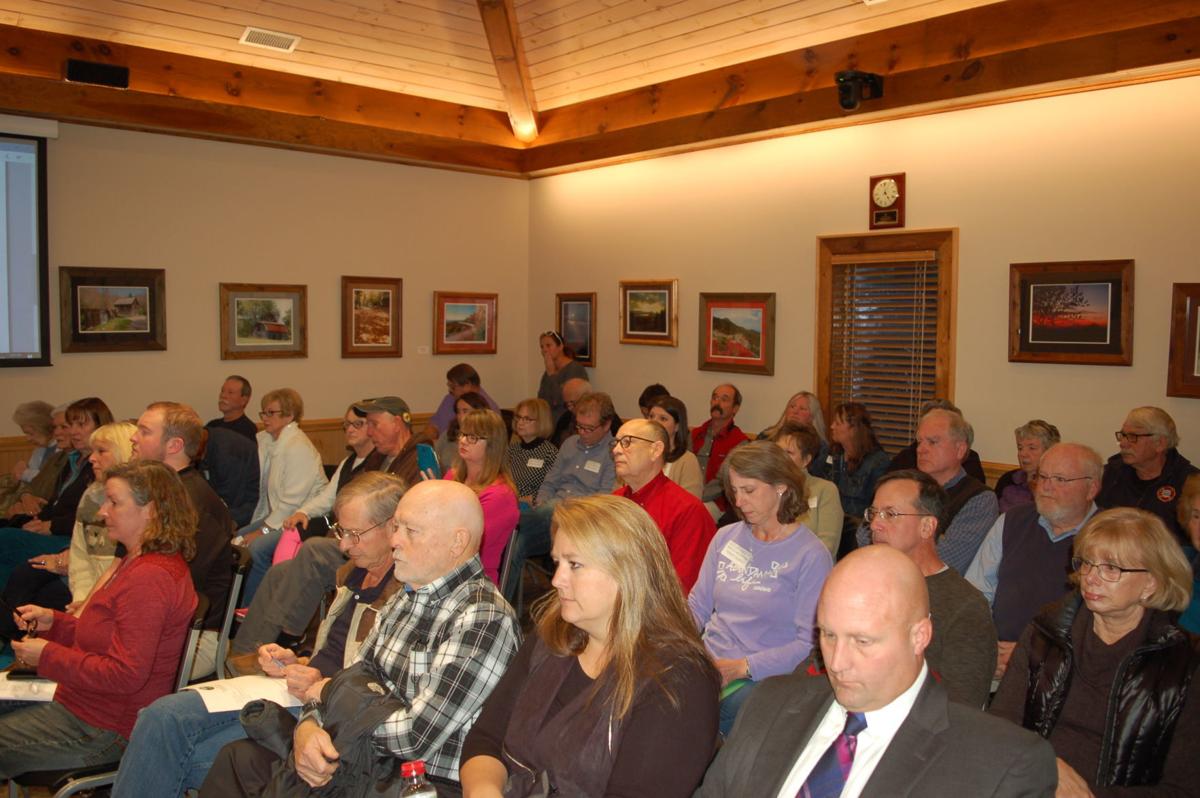 Every available seat was taken at the Beech Mountain Town Hall on Thursday, Nov. 21, for a special meeting. Several more citizens and staff were lined up around the entrance to the chambers.

Every available seat was taken at the Beech Mountain Town Hall on Thursday, Nov. 21, for a special meeting. Several more citizens and staff were lined up around the entrance to the chambers.

BEECH MOUNTAIN — The disputed residency of a Beech Mountain town council member has sparked angry feelings as Weidner Abernethy defends his seat from the charge made by other council members.

Abernethy was first accused of changing his voter registration to an address in Burke County on Nov. 12 and faced a call to resign immediately from Council Member Wendel Sauer.

In the aftermath, a special meeting was called for Nov. 21 to consider the eligibility of Abernethy to continue to serve. In an overflowing town chambers, the council met to consider the evidence.

After a 30-minute meeting in which pro-Abernethy supporters continually shouted protests to the council members and applauded, the eligibility hearing was continued until 4 p.m. on Dec. 10, when a newly elected council will take up the matter.

The council decided to continue the hearing after an objection was raised by Abernethy’s attorney, Nathan Miller of Boone, over issues of due process.

“We’re pleased that they have recognized that the due process needs to be had on Mr. Abernethy and this case has been continued for the newly elected board and the will of the people of Beech Mountain can be properly exercised,” Miller said after the meeting.

Miller argued that N.C. General Statutes require that Abernethy be served with a notice of hearing at least six hours before the meeting to his front door and said that did not occur. Town Clerk Tamara Mercer said notice was sent via email as it previously has been in the past.

During the Nov. 21 meeting, Abernethy called the hearing a “politically motivated issue” and denounced the proceedings.

Three new council members — who were elected on Nov. 5 — will take their seats on Dec. 10. Jimmie Accardi (four years), Kelly Melang (four years) and Erin Gonyea (two years) were elected over the incumbents Renee Castiglione, Wendel Sauer and Carl Marquardt in the 2019 municipal elections. Council Members Barry Kaufman and Abernethy’s terms are up in 2021.

At the Nov. 21 meeting, Accardi said he was confident in the new council’s ability to handle the decision.

Castiglione, the current mayor, said she would prefer that the current council take up the eligibility issue, and several dates before Dec. 10 were proposed, but none could be worked out.

The pro-Abernethy crowd members demanded public comment during the meeting, which Castiglione denied, saying it’s only required once a month at the regularly scheduled council meeting. After more shouts, Castiglione reminded the crowd that if needed, she would have audience members removed from the chambers.

The residency issue first arose at the end of Beech Mountain’s regularly scheduled Nov. 12 meeting. In council comments, Sauer said while running for re-election, he requested a list of registered voters on Beech Mountain from Watauga and Avery counties.

“After a period of time, I realized the absence on the list of Councilman Abernethy,” Sauer said on Nov. 12. “Follow-up research found that he was no longer registered in Beech (Mountain) but in Burke County.”

Sauer said that he found out that Abernethy registered to vote in Burke County on July 26 of this year and presented a deed of trust for Burke County property purchased in April.

Sauer added that Abernethy re-registered to vote in Watauga County on Oct. 16, but said he shouldn’t be allowed to serve anymore.

“I think Council Member Abernethy should have resigned from Beech Mountain Town Council on or shortly after April 15 when he ... effectively moved his permanent residence to Burke County,” Sauer said. “He had another opportunity to do that in July.”

Sauer said he was prepared to speak on Abernethy’s eligibility to serve even if he won the election on Nov. 5.

“My wife has a lake house and I have a mountain house,” Abernethy said. “My residency has been on Beech Mountain for 12 years, give or take.”

Abernethy said that when he and his wife purchased the Burke County house, he did sign the deed. However, Abernethy disputed the claim that he registered to vote in Burke County.

“If it’s by law I have to resign, I will, but if it’s in a gray area, I think I’ve done a pretty good job representing Beech Mountain and our community and our employees and being an advocate for the mountain,” Abernethy said.

Abernethy added that while going through his mail, he found a voter registration card for him registered to his Burke County address, saying he was “livid” when finding out. That day, Abernethy claimed, he immediately changed his residency back to Watauga County. Forms submitted to town staff showed this occurred on Oct. 16.

“I’m not going to do anything illegal,” Abernethy said. “I keep my hands on the table and I keep my cards where everybody can see them.”

Abernethy said he found it “suspicious” that Sauer waited until that day to present the information.

“I voted (in Watauga County), and I didn’t vote for you,” Abernethy said to Sauer. “I think by pointing this out, you have done this community an injustice.”

Beech Mountain town attorney Stacy “Four” Eggers IV sent a memo to Town Manager Tim Holloman on Nov. 21 that concluded that in his opinion, Abernethy must step down.

“Based upon the above stated facts, Abernethy became ineligible to serve on the Beech Mountain Town Council upon his registering to vote in Burke County on July 26,” Eggers’ memo states. “The question then becomes whether Abernethy’s re-registration in Watauga County operates to ‘cure’ this ineligibility. Under the language of (North Carolina General Statutes) and the applicable case law, this ineligibility cannot be cured.”

During the Nov. 21 meeting, Abernethy said he trusted nothing Eggers said on the subject.

Castiglione said even though she was sure it was by accident, she was “angry” that Abernethy has served since July, saying he didn’t deserve to.

“It makes me mad because all we hear from people is that part-time residents are angry because they can’t vote up here,” Castiglione said.

According to an N.C. DMV agency form that doubles as a voter registration form that was provided to town council members in advance of the Nov. 21 meeting, Abernethy’s address was listed as in Burke County with a Hickory address. The form is dated July 26.

Watauga County Board of Elections Director Matt Snyder said that the board has “no role” in this issue, from what he’s been able to tell, and enforcement of residency requirements for town council members rather falls under the powers of the town, Snyder said.

Miller said on Nov. 21 that Beech Mountain’s code didn’t allow an evidentiary hearing and said it would fall under the scope of the county board of elections, disagreeing with Eggers’ interpretation of the matter that the council had the authority to hold such a meeting.