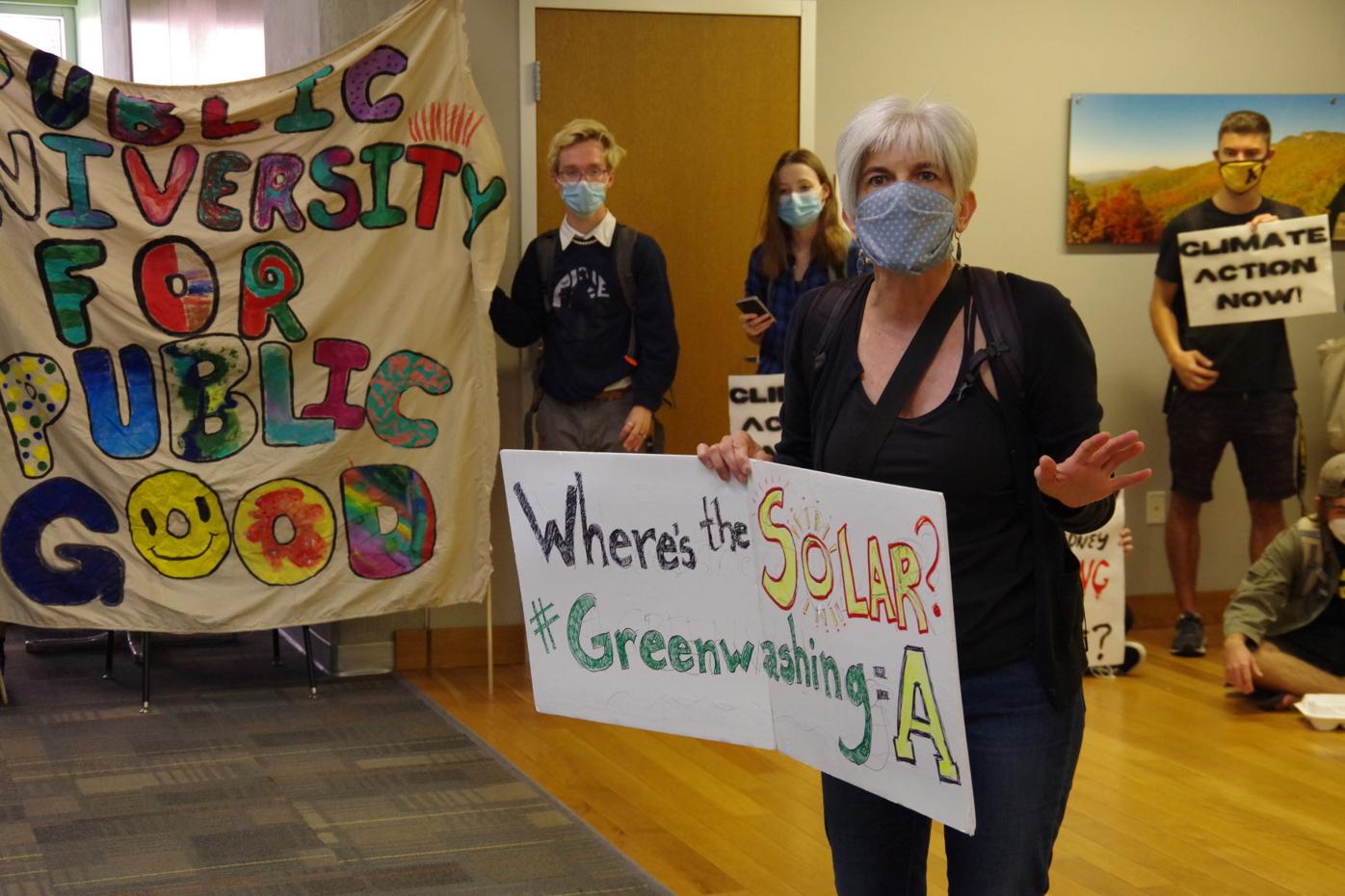 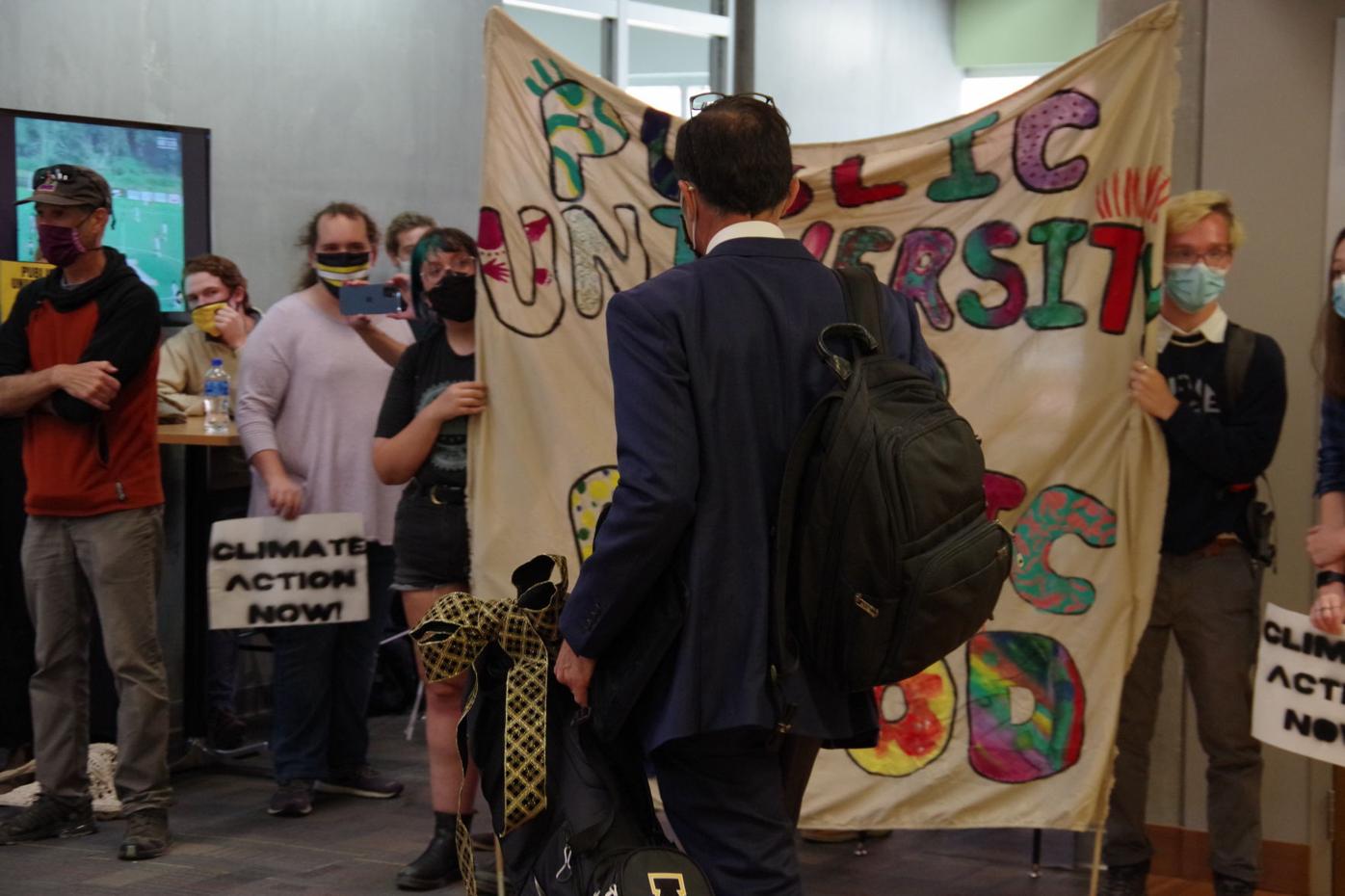 BOONE — During the most recent Appalachian State Board of Trustees meeting, nearly 100 members of App State’s Climate Action Collaborative protested outside as part of the global movement for school strikes.

Those students, according to ClimAct, represented more than 2,500 signatories to a ClimACT petition, a recent move in a growing campaign pushing App State to become climate neutral by 2030 at the latest, and to establish itself as an “anchor institution” that uses public funds to support North Carolina’s climate-vulnerable communities.

“Young people have had enough,” said App State student and ClimACT member Max Shirikjian in a press release. “Politicians have been debating what to do since before I was even born. Five years ago at the Paris Global Climate Accord, the best they could do was set voluntary goals. And at the local level we have institutions like App parroting that same ‘big talk-little action’ dynamic. This isn’t why I came here, and this isn’t what a public university should be doing.”

During the Sept. 24 meeting, App State professor and ClimACT member Brian Burke requested to have the floor to “discuss why the trustees are refusing to consider unanimously passed student government and faculty senate bills.” Burke requested to speak before a motion was made to go into closed session.

Outgoing Chair of the App State Board of Trustees Scott Lampe responded to Burke’s request by saying “No sir, you are out of order at this time. Sorry.”

As Lampe responded to Burke, App State police officers escorted him from the room. A student member of ClimAct, Sarah Sandreuter, then spoke and asked the trustees to meet with ClimAct to develop a plan for defending students’ futures. Sandreuter was also escorted from the room.

Hayes also said it is important to note that the university’s board of trustees does not have the authority to make decisions regarding the university’s climate action plan or the adoption of policies applicable to the control and supervision of the university’s electric power plant, New River Light & Power. That authority lies with Chancellor Everts, who has charged members of her leadership team to develop and implement carbon neutrality initiatives.

“Our clearly stated intention was to contribute to and improve the meeting, since the trustees’ meetings are completely ignoring the unanimous support for climate action voiced by student government and faculty senate,” Burke said. “The fact that they call our effort to participate a disruption — and that they have the police on hand to silence us even before we have finished our request — shows very clearly how little they care about democracy and effective governance.”

During the closed session nearly 100 ClimAct members gathered outside the doors with signs. Members shared personal stories about why they came to the event and their visions for a better world. They also demanded meetings with the trustees.

“After several outreach attempts to members of ClimACT spanning nearly two years— including recent ones related directly to the letter this group sent the Trustees — Chief Sustainability Officer Lee Ball met with Dr. Brian Burke on Sept. 20 to provide him and ClimACT updates on the university’s climate action efforts,” Hayes said. “Upon the arrival of some of the demonstrators to the location of Friday’s trustee meeting, Dr. Ball greeted them and Dr. Burke agreed to meet with Dr. Ball again. We are very pleased that after multiple attempts, at least some members of this group appear ready to meet.”

Hayes also said one trustee went into the hallway to greet demonstrators after closed session, offered his contact information and began a dialogue.

“Unfortunately, the response to this entree was curse words being shouted at him,” Hayes said.

Hayes also said that under Chancellor Everts, App State has developed a convention of the individuals who have the most knowledge and authority meeting with students, faculty, staff and others who wish to discuss ideas or concerns about university business and practices.

“This convention does not always match the desire of activists who wish to provide demands to those they perceive to hold the most power, but it is the most efficient and effective way for those who wish to discuss or effect systemic change to have a voice in the process,” Hayes said. “(Chief Sustainability Officer Lee Ball) has attempted many times to meet with members of ClimACT, and in fact has facilitated and attended numerous meetings with individuals who wish to work together on the university’s climate neutrality initiatives, including Dr. Brian Burke, who has identified himself as a spokesperson for the ClimACT group.”

While ClimAct members were asking for more in relation to sustainability from App State, they did credit the university for moving to 15 percent renewable sourced purchased energy. According to Hayes, Appalachian State Renewable Energy Initiative voted to contribute $50,000 toward the university’s purchase of hydroelectric power from New River Light & Power, which is in addition to $100,000 committed by the university.

“This is an important demonstration of a student-led, student-funded organization working cooperatively with university administrators to effect important purchasing changes,” Hayes said. “This step is possible because of our new contract with Carolina Power Partners, which begins on Jan. 1, 2022. Chancellor Everts authorized the negotiations to bring this initiative to fruition in 2014, and in 2016 we finalized the new energy contract.”

More information on ClimAct and a petition and letter to the App State BOT can be found at actionnetwork.org/petitions/climate-action-at-app. ClimAct’s demands in detail can be found at appclimact.wixsite.com/climateaction/demands-in-detail.

More information on App State’s climate action working groups and their areas of focus can be found at sustain.appstate.edu/initiatives/climate-action/ and at chancellor.appstate.edu/messages/id/225.