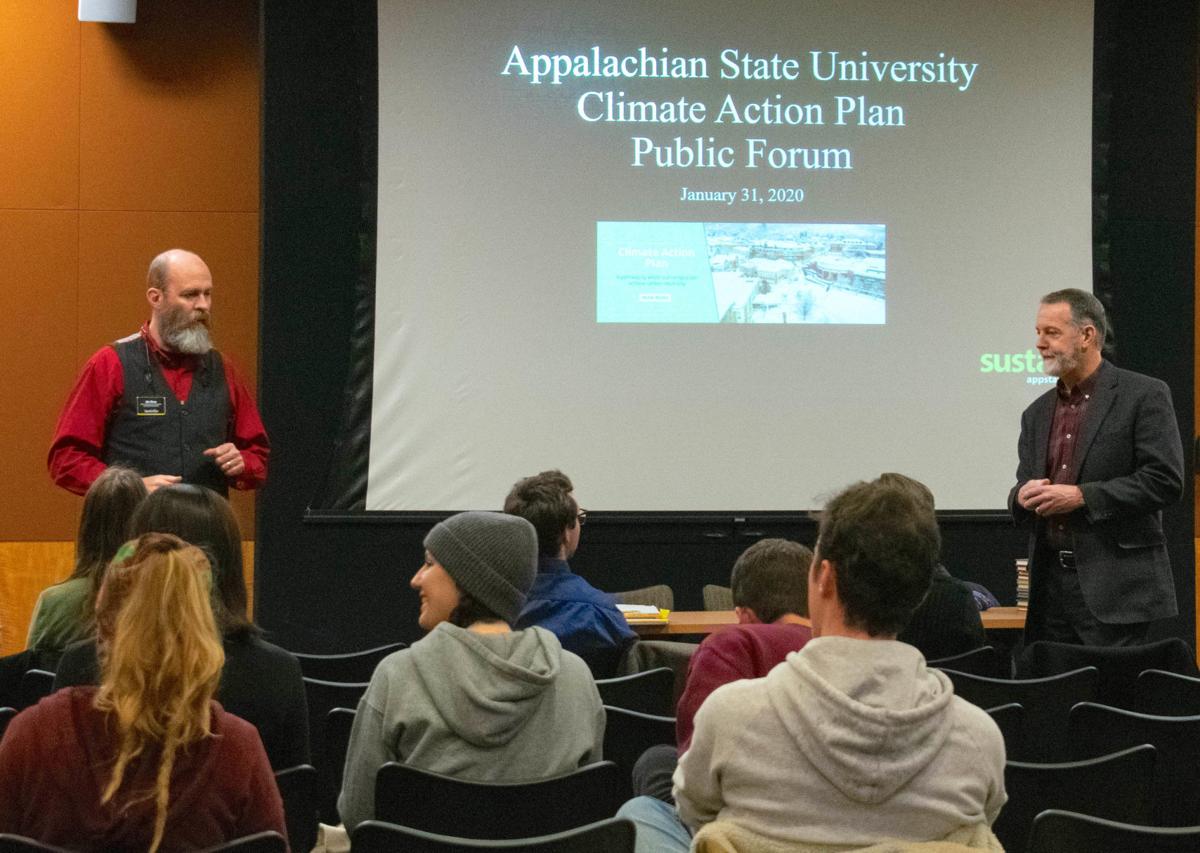 The Office of Sustainability’s Data and Assessment Specialist Jim Dees and panel facilitator Jeff Ramsdell prepare to speak to an audience gathered for the climate action forum on Jan. 29 in Parkway Ballroom of Plemmons Student Union. 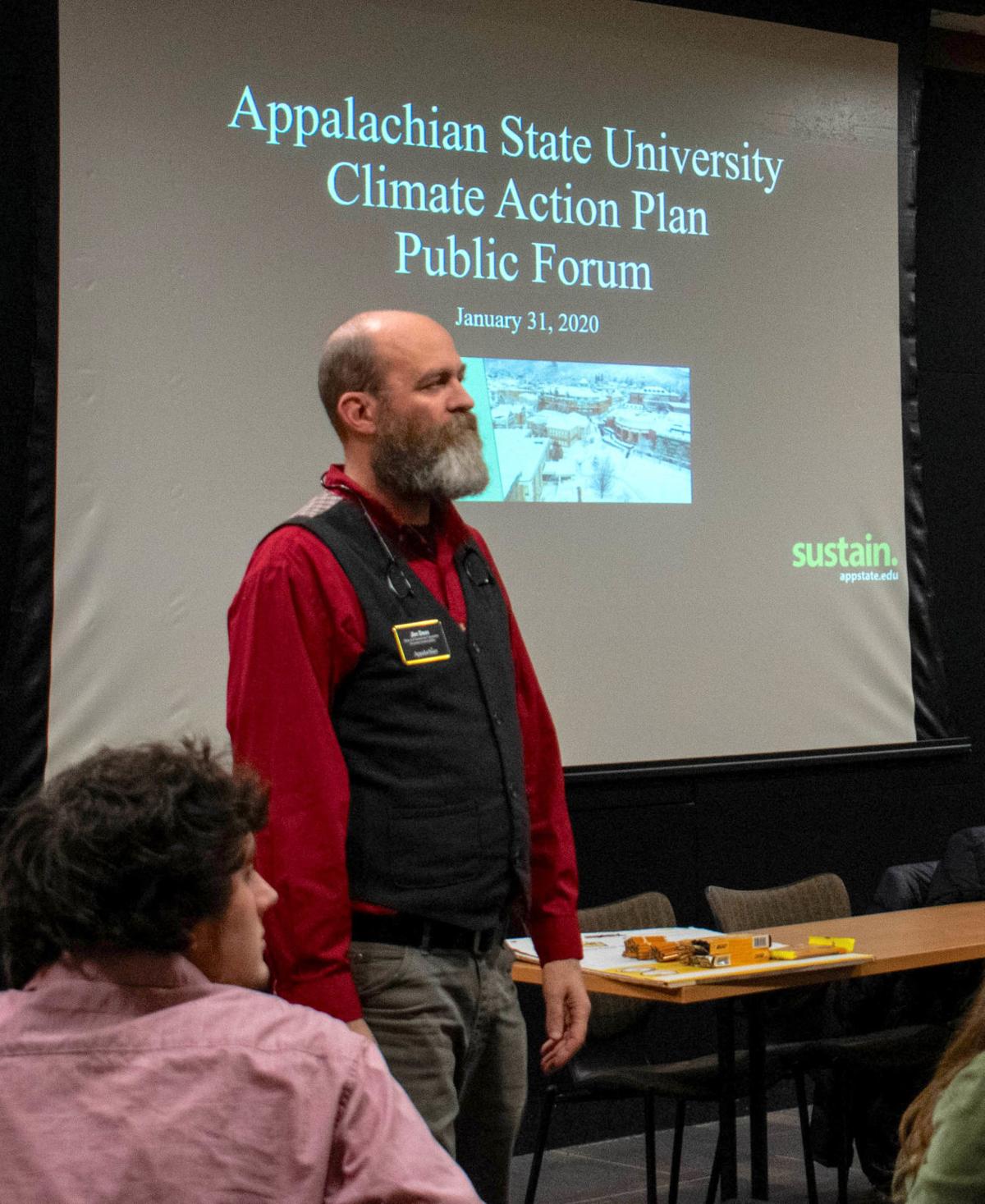 The Office of Sustainability’s data and assessment specialist Jim Dees prepares to speak to an audience gathered for the climate action forum on Jan. 29 in Parkway Ballroom of Plemmons Student Union. 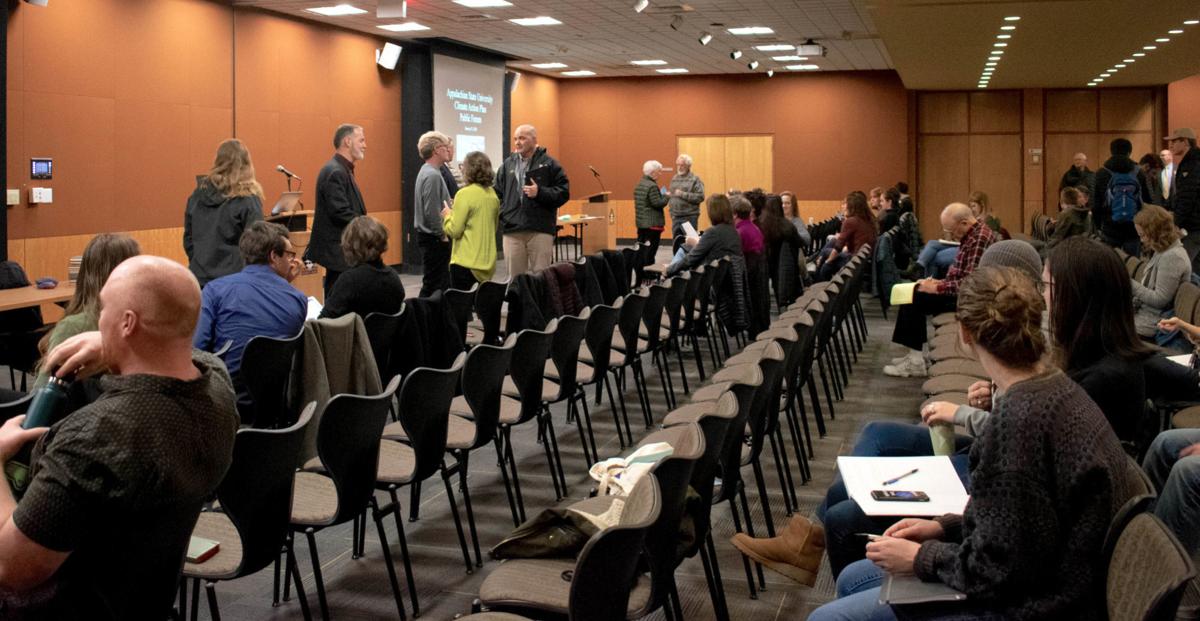 Students, faculty and community members gather in the Blue Ridge Ballroom of Plemmons Student Union on Jan. 29 for the beginning of the climate action forum.

The Office of Sustainability’s Data and Assessment Specialist Jim Dees and panel facilitator Jeff Ramsdell prepare to speak to an audience gathered for the climate action forum on Jan. 29 in Parkway Ballroom of Plemmons Student Union.

The Office of Sustainability’s data and assessment specialist Jim Dees prepares to speak to an audience gathered for the climate action forum on Jan. 29 in Parkway Ballroom of Plemmons Student Union.

Students, faculty and community members gather in the Blue Ridge Ballroom of Plemmons Student Union on Jan. 29 for the beginning of the climate action forum.

BOONE — In a town full of green goals, App State has begun drafting a plan to address its carbon footprint in the mountains.

The Appalachian State University Sustainability Council and the Office of Sustainability will release the first draft of the 2020 Climate Action Plan on April 22, the 50th anniversary of Earth Day. The council held a climate action forum on Jan. 31 in the student union to accept public input on sustainable solutions for the university.

There are 13 groups working on the Climate Action Plan, each focusing on a different area of interest. Each group has at least one representative from Student Government Association; Renewable Energy Initiative; Office of Sustainability; Research Institute for Environment, Energy and Economics; Faculty Senate; Staff Senate; or Climate Action Collaborative.

The working groups are exploring sustainable methods to reduce carbon in each focus area. Three of those groups are devoted to electricity, transportation and steam, the main carbon contributors on campus. They make up 97 percent of App State’s carbon footprint; electricity contributes 43 percent.

“That’s where we think a lot of our focus needs to be, but we certainly don’t want to discard any of the other ones,” Jim Dees, the Office of Sustainability’s data and assessment specialist, said.

These carbon contributors were the subjects of three of the four discussion groups facilitated at Friday’s panel. There was an additional “catch all” group. Dees encouraged participants to pick the area they felt most passionate about but said all ideas could be shared.

The writing group, whose purpose is to draft the climate plan, wrote down the audience’s ideas as they brainstormed within discussion groups. Dees said the ideas shared in the panel would be logged and processed for the council’s consideration in the 2020 plan. Participants could also submit their idea as a form, which is available at https://sustain.appstate.edu/initiatives/climate-action/.

Heating ideas posed during the forum included updating radiators in I.G. Greer Hall, looking at restrictive campus or state policies and creating a lower temperature in dorm rooms. Investing in local solar and wind farms was considered in the electric group, as well as cutting down on campus electricity during the summer months. A bike system was reflected on in the transportation group, and participants used UNC-Charlotte’s light rail as an example for clean transportation.

Dees said the council is going to take each idea submitted and add a financial, carbon and time evaluation to each one so that they can speak intelligently of them.

“When we say, ‘Hey, someone recommended LED light bulbs retrofitting,’ well that’s a great idea. How much carbon are we going to save? We will know what that answer is,” Dees said. “We will know how much that will cost and we will know approximately what the timeframe is to implement that, that one solution.”

The council will then decide if the idea is a valuable contribution to the 2020 plan. A second facilitated public forum will be held on March 31 to provide updates and talk about any remaining issues.

“We’re gonna read over these with the knowledge that we’ve gained through this process and have a heart to heart about which one of these ideas can we live with,” Dees said.

The council said choices made in the 2020 plan are going to be compromises, after considering the pros and cons of each solution. Dees said many carbon-free alternatives come with other sets of issues and the council wants to shed light on that.

“Are we marginalizing a community somewhere by sticking solar panels all in their backyard? We want to think about these things,” Dees said.

Lee Ball, chief sustainability officer at App State, said App encounters transparency issues with businesses. Companies can be reluctant to give out information on their environmental and social practices.

The new Climate Action Plan expands on ideas from the 2010 plan and examines more closely the financial and environmental logistics behind each proposed solution.

“This is how we’re going to get there, you know, and these are all the steps,” Ball said. “We didn’t evaluate it as deeply as we’re attempting to now.”

The council said that the plan being released April 22 is very clearly a draft, and the document is subject to change.

“It won’t end anytime soon until we reach climate neutrality,” Ball said. “We want to create a process that if we need to move a target, we move a target.”

The Climate Action Plan is exclusive to App State, but provides opportunities for the town and university to work together.

New River Light and Power General Manager Ed Miller was also in attendance. App State owns NRLP and will begin a new contract with energy provider NTE in 2022. Ball said NRLP customers want choice, and the university will try to give them that in this new contract phase. Solar energy is a popular choice being considered for customers who want to choose clean energy in their utility bill.

“We have the potential to be able to buy solar and then sell it to the town of Boone to help them reach their climate action goals,” Ball said.

If you have a strategy to reduce App’s carbon footprint, submit a climate action suggestions form at https://sustain.appstate.edu/initiatives/climate-action/. For more information on the 2020 Climate Action Plan, contact the Office of University Sustainability at (828) 262-2659.