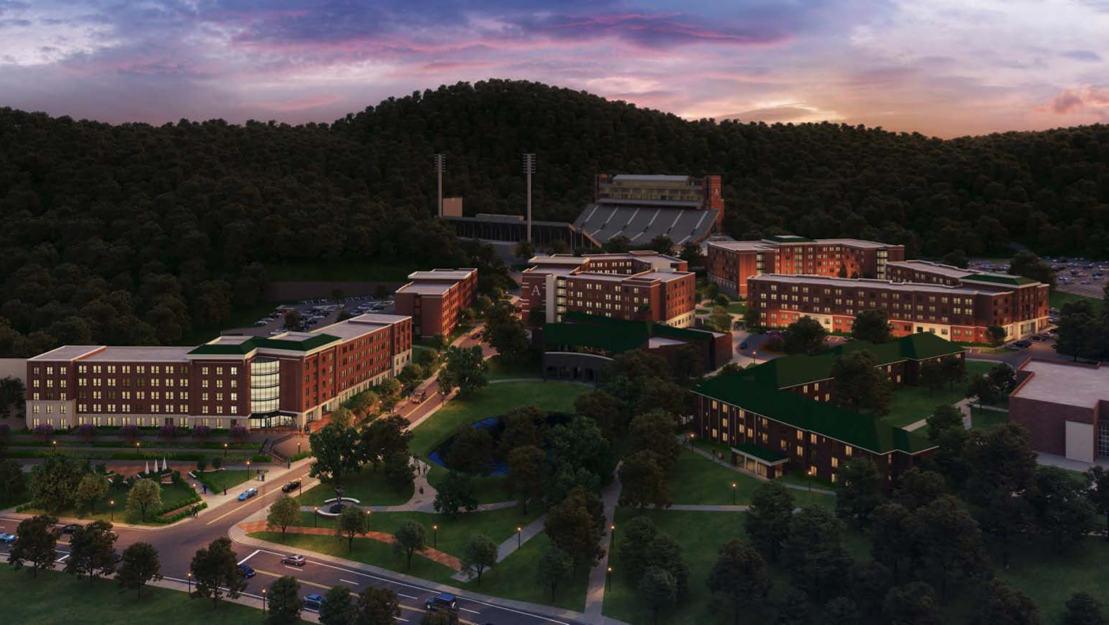 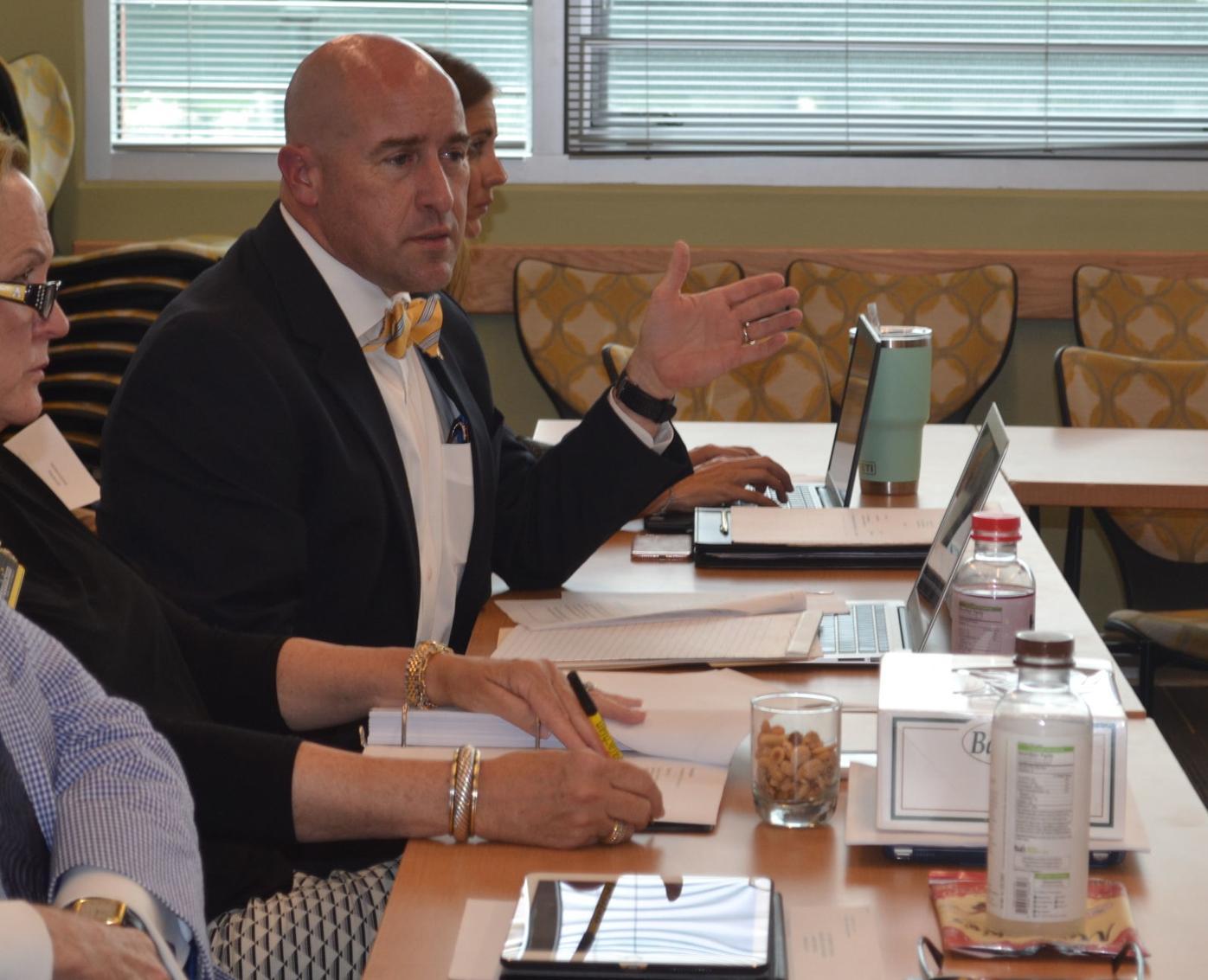 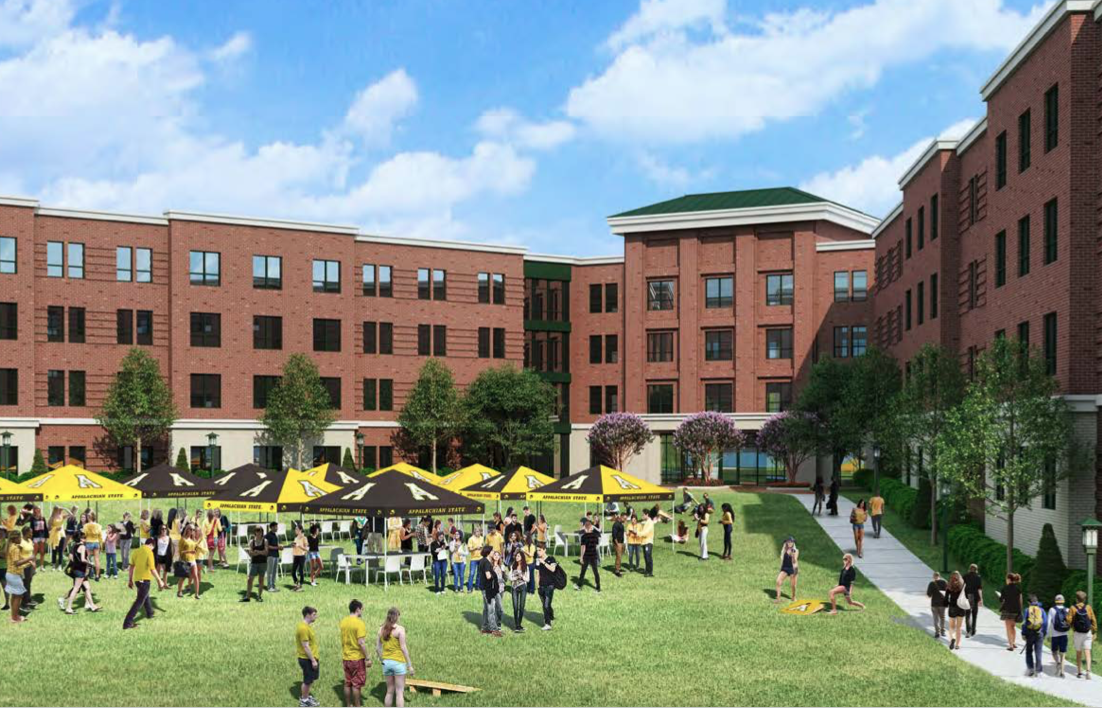 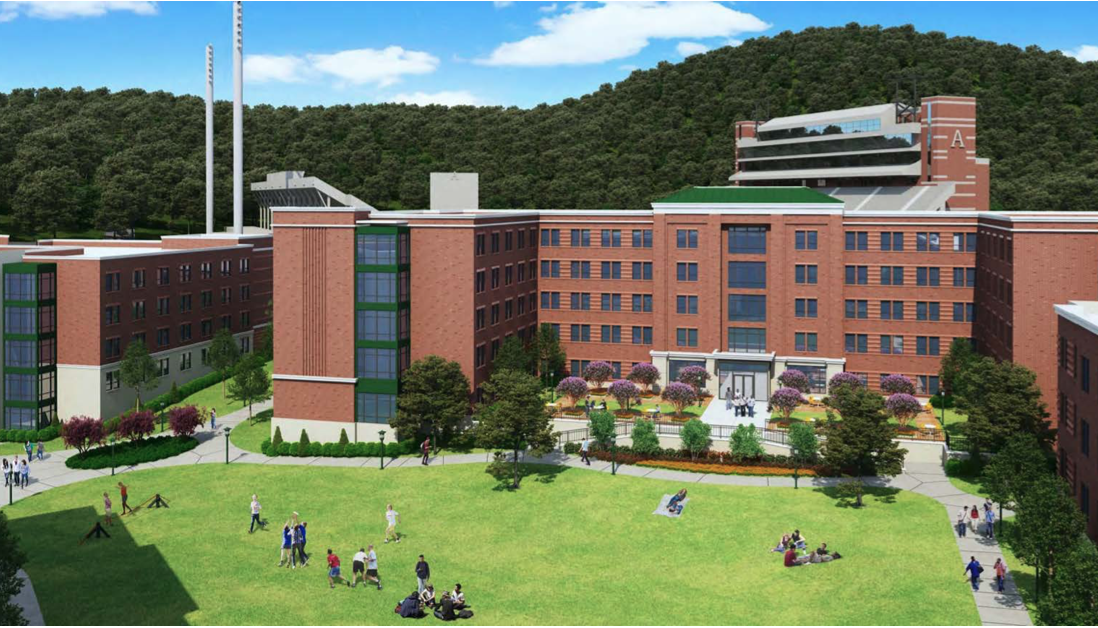 A rendering of Appalachian State University’s planned 200 building can be seen from the viewpoint from the top of the planned 500 building. 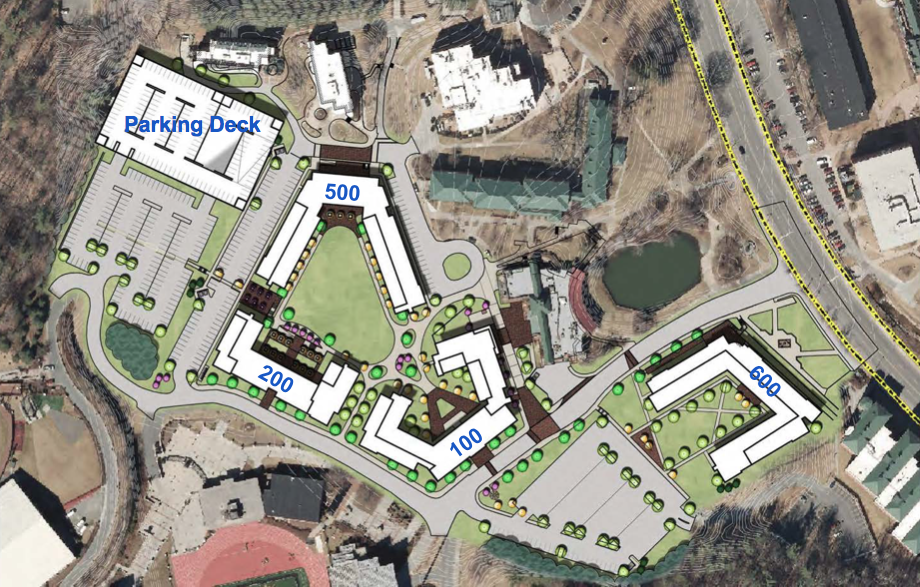 A rendering of Appalachian State University’s planned 200 building can be seen from the viewpoint from the top of the planned 500 building.

BOONE — At the end of Appalachian State University’s public-private partnership — or P3 — project, the school plans to have a new parking deck, four buildings and almost 2,200 total beds with a net gain of 300 to 400 beds.

The project is scheduled to take four years from start to finish, according to Matt Dull, assistant vice chancellor for finance and operations. Dull and J.J. Brown, vice chancellor of student affairs, presented the ASU Board of Trustees Student Affairs Committee with more information on the project on June 21.

Brown said the plan ultimately replaces a number of current residence halls that have “aged out.” The new buildings would present suite-style beds or apartment-style beds, Brown said.

Georgia-based RISE (formerly Ambling University Development Group) was selected to be the developer for the 14-acre project.

Dull said the parking deck wasn’t originally part of the university’s proposal. He said the proposal asked developers to think creatively on how to do the project with no deductions in parking or beds during the entire construction. The parking deck would provide significant savings to the project and will add about 250 new parking spaces to that side of campus, Dull stated.

“Without the parking deck it would require us to do quite a few temporary parking lots where about every eight to nine months we were building a new parking lot, and then taking a parking lot we just built nine months ago, tearing it up and moving it somewhere else,” Dull said.

Construction of the parking deck is scheduled to begin this coming August.

Buildings 100, 200 and 500 would be arranged in a way where there would be a three-acre courtyard in the middle. This space could become the new “duck pond field” area and become the new tailgating spot, Dull said.

Brown mentioned that there was talk of how to design the roof area of building 500 to use as a terrace or a stage to utilize for homecoming, pep rallies, concerts or events.

The only building that will be in the same footprint of an existing building is 600, as it will be constructed where Justice Hall currently sits. The 600 building would keep the horseshoe shape of Justice Hall, but would be rotated to put the long side of the building parallel to Rivers Street. This would create a flat courtyard area that could be used by students.

Leroy Wright, associate vice chancellor for student affairs, also addressed the student affairs committee about the plans for a dedicated plot on campus for seven of its National Pan-Hellenic Council organizations.

The NPHC organizations are ASU’s African American fraternities and sororities.

The NPHC plots and garden will be located in the quad area between Roess Dining Hall, the Administration Building, I.G. Greer and the Steam Plant on Appalachian’s campus, according to the student affairs committee.

The idea for the plot and garden was discussed last year as a gathering place for students and alumni of the organizations and would provide more visibility for them on campus.

Wright said the plots and garden project leadership team consisted of representatives from NPHC alumni, ASU staff and current NPHC students. Wright said to date, the team has raised $114,900, which surpassed its $50,000 goal. The total cost of the project is set at $300,000.

The plot and garden is scheduled to be completed in August with a grand opening on ASU’s homecoming day this fall.

“The energy and the excitement about this project at homecoming is going to bring in droves of alumni and people to acknowledge our commitment to our students and our NPHC chapters,” Wright said.

The design was created by students, with each of the seven NPHC organizations having its own designated monument in the garden. Wright said the top of each monument will adorn the shield of an NPHC chapter, while the front will have a plaque with the chapter’s history and chartering membership. Monuments will be placed in order of founding — with Alpha Phi Alpha Fraternity first and Iota Phi Theta Fraternity last.

CHAPEL HILL — The UNC system Board of Governors on May 24 gave Appalachian State the OK to move forward with a private developer on a 2,100-be…

its certainly entertaining to watch local government masquerade as working for the common man while they pursue this foolishness. they're putting ten pounds in a five pound bag. notice the traffic now and extrapolate what its gonna be like with each new addition of everything they're building. won't be long till boone feels like nyc. great for the ones who profit from it all and not so much for the common man.

It appears that once again the "Champions of Tolerance" at our "local" newspaper (((The Watauga Democrat))) . . .

. . .who always claim the Moral, Ethical and Intellectual "High Ground" . . .

. . are censoring the legitimate concerns of the REAL LOCAL TAXPAYERS!!!

No one can serve two Masters . . Whom does (((The Watauga Democrat))) serve?