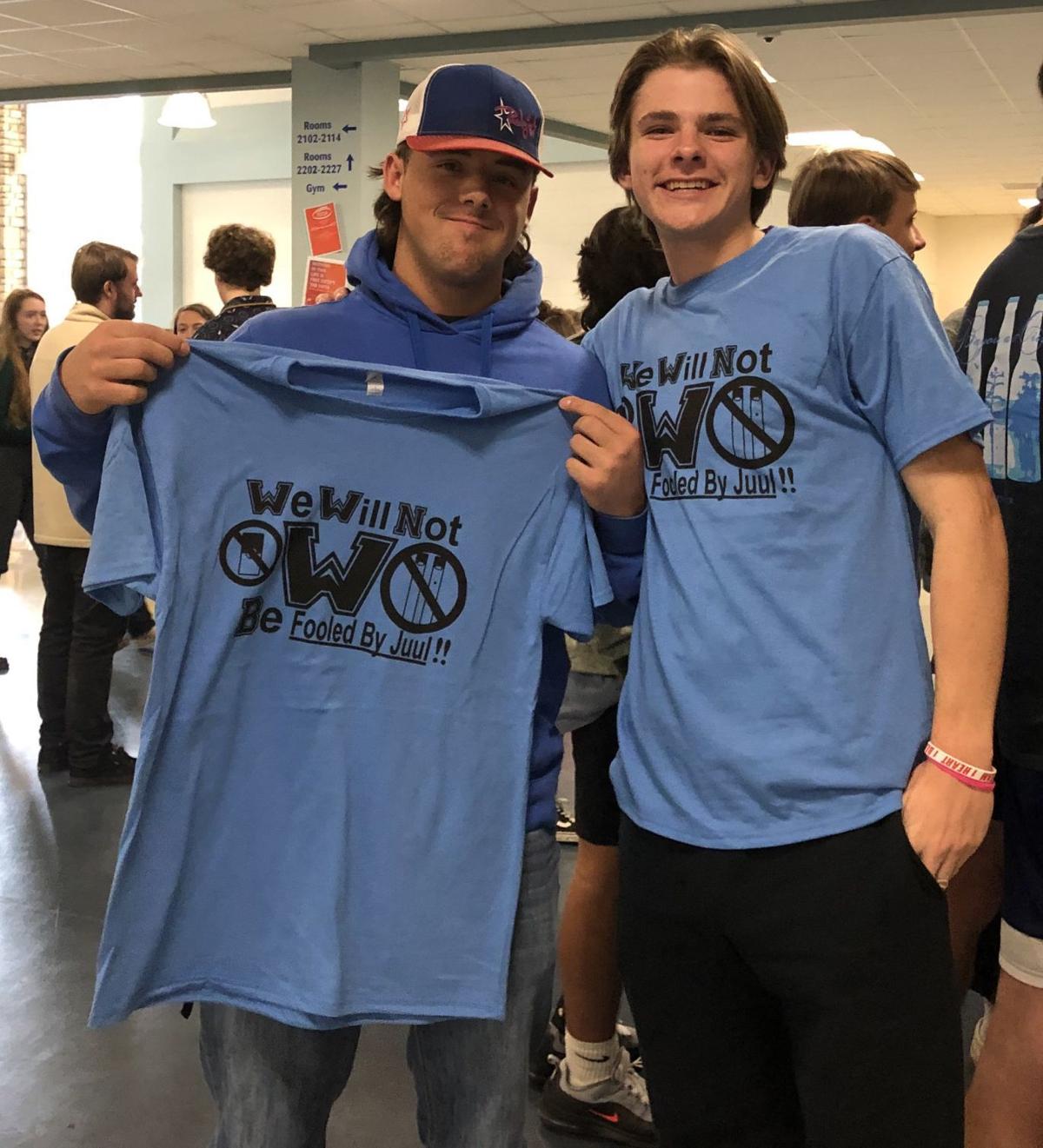 Jackson Miller and Andrew Freeman show off shirts with the phrase, ‘We will not be fooled by Juul.’ 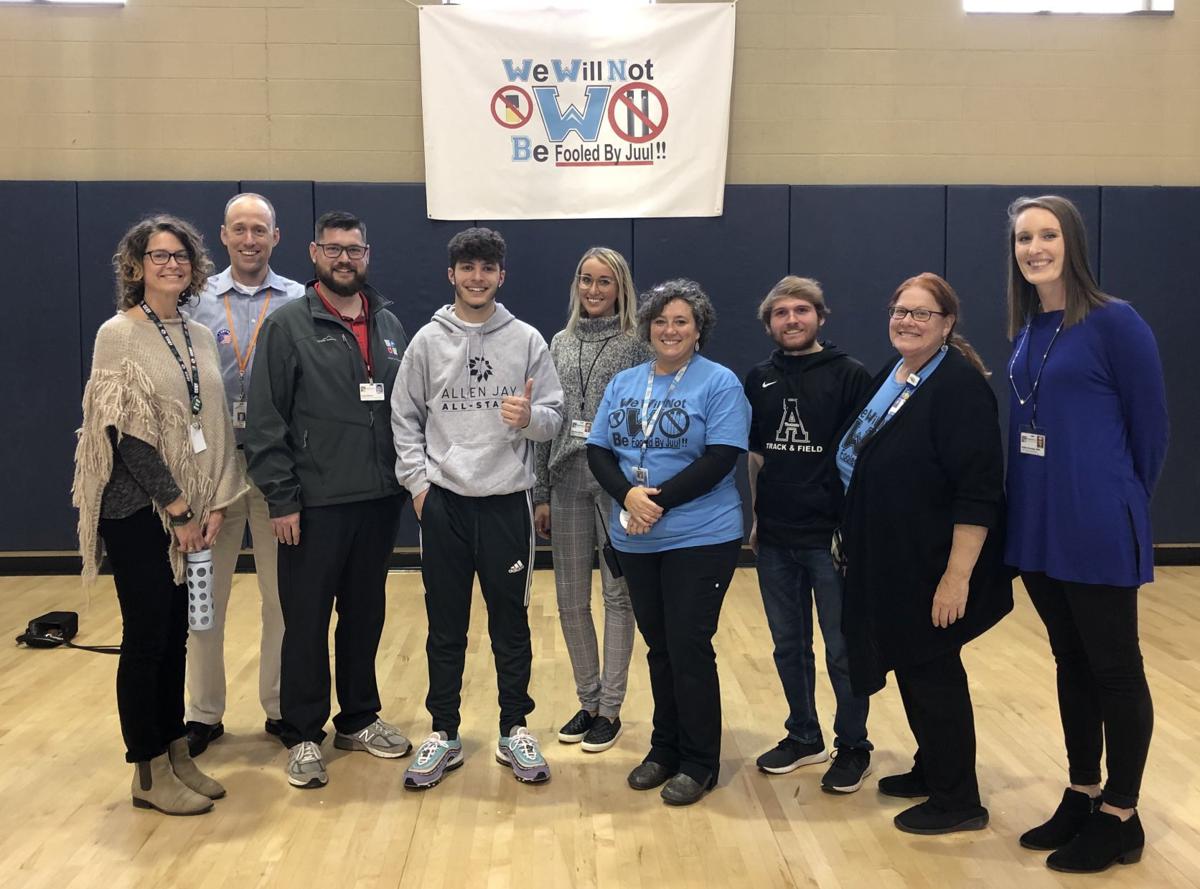 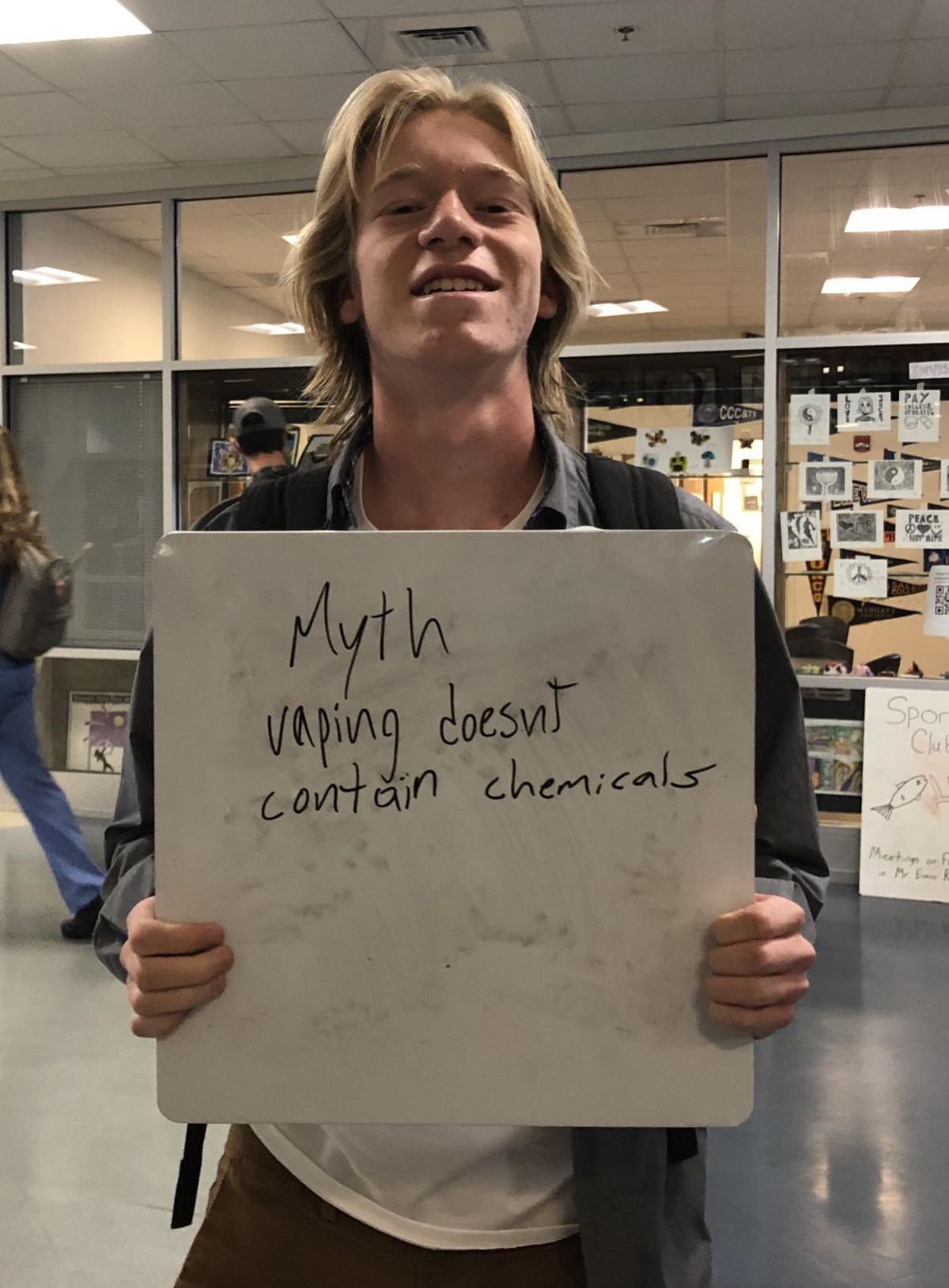 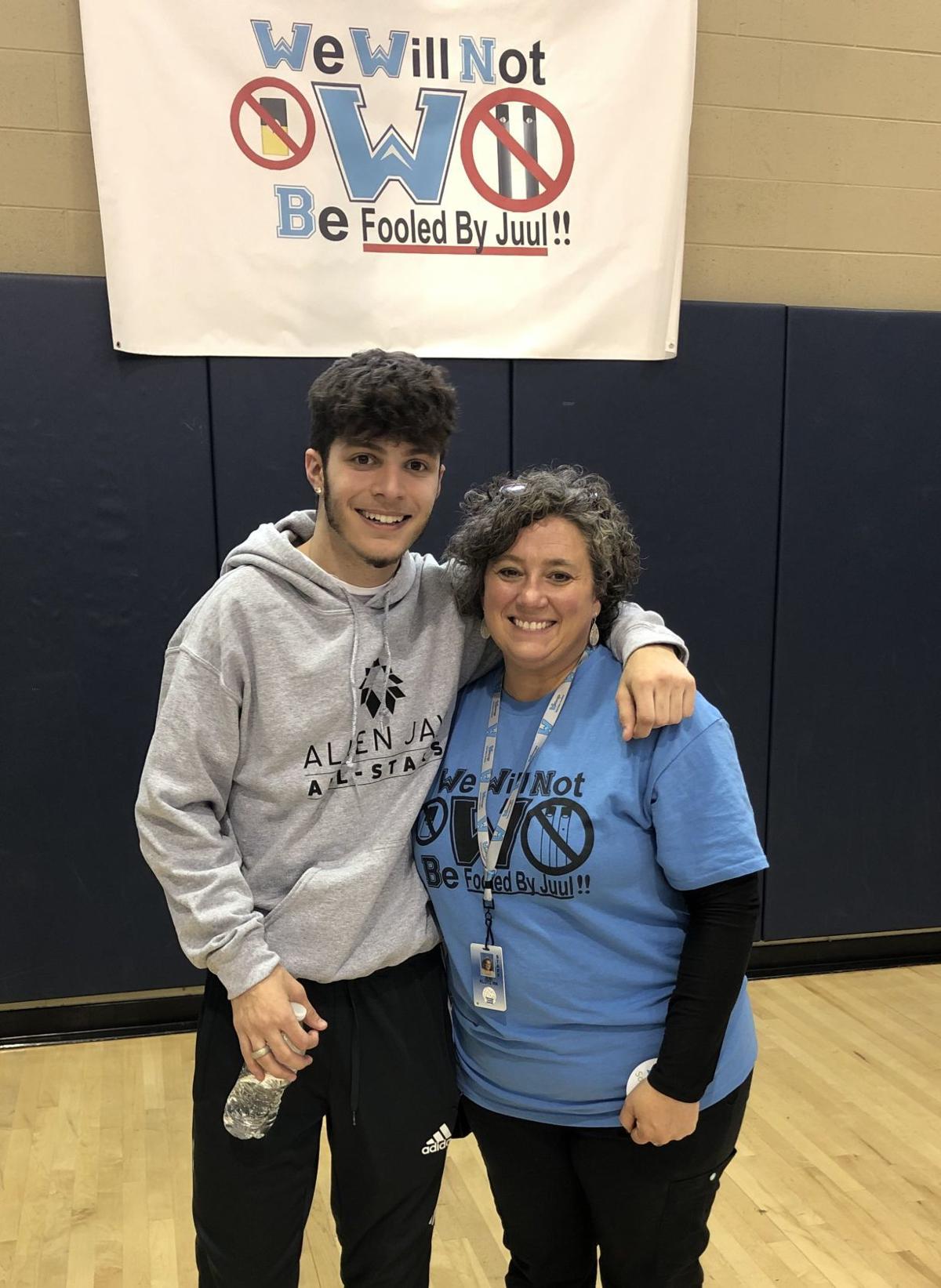 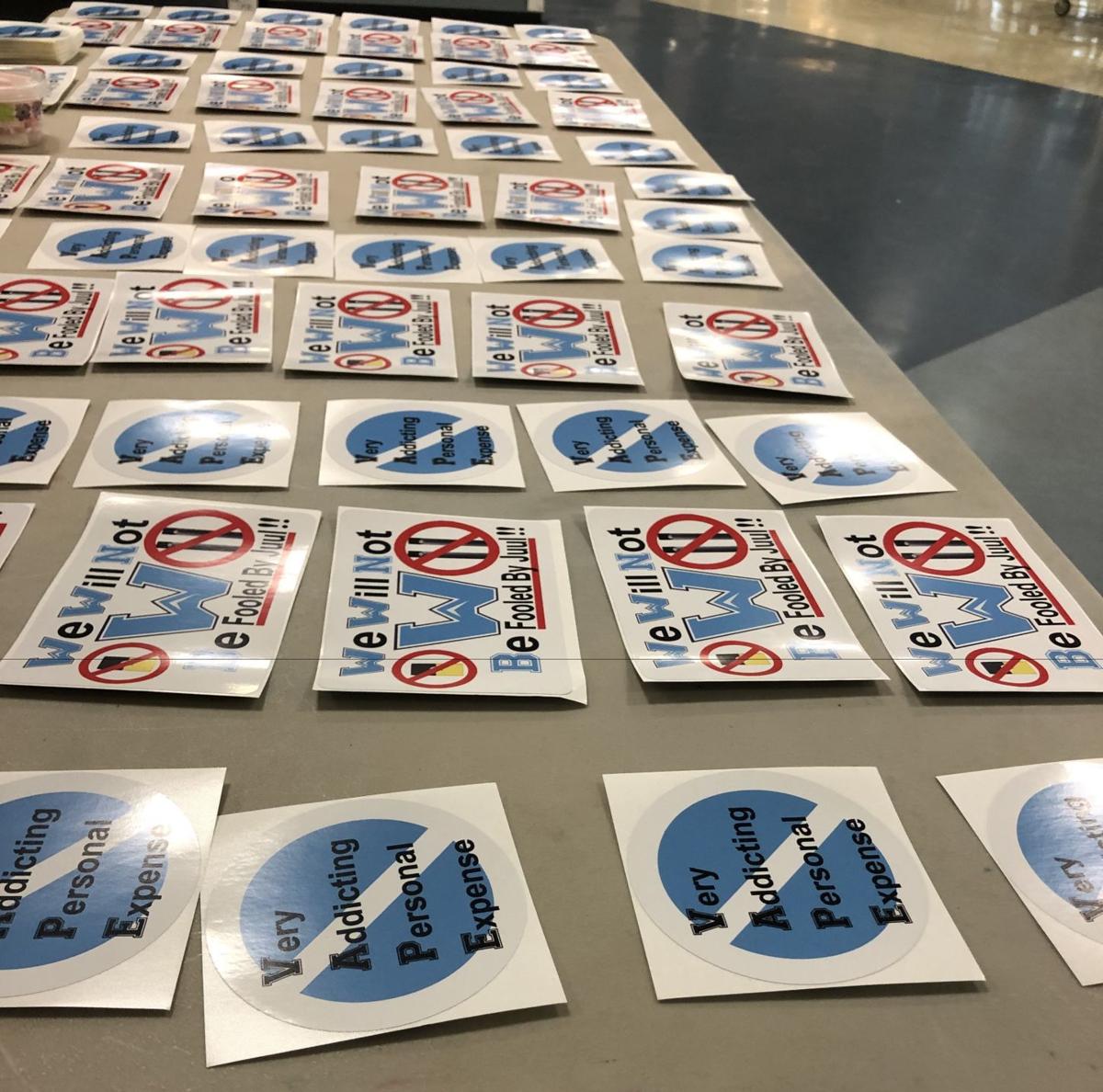 Watauga High School — with the help of Go Postal — creates decals for an anti-vaping campaign. 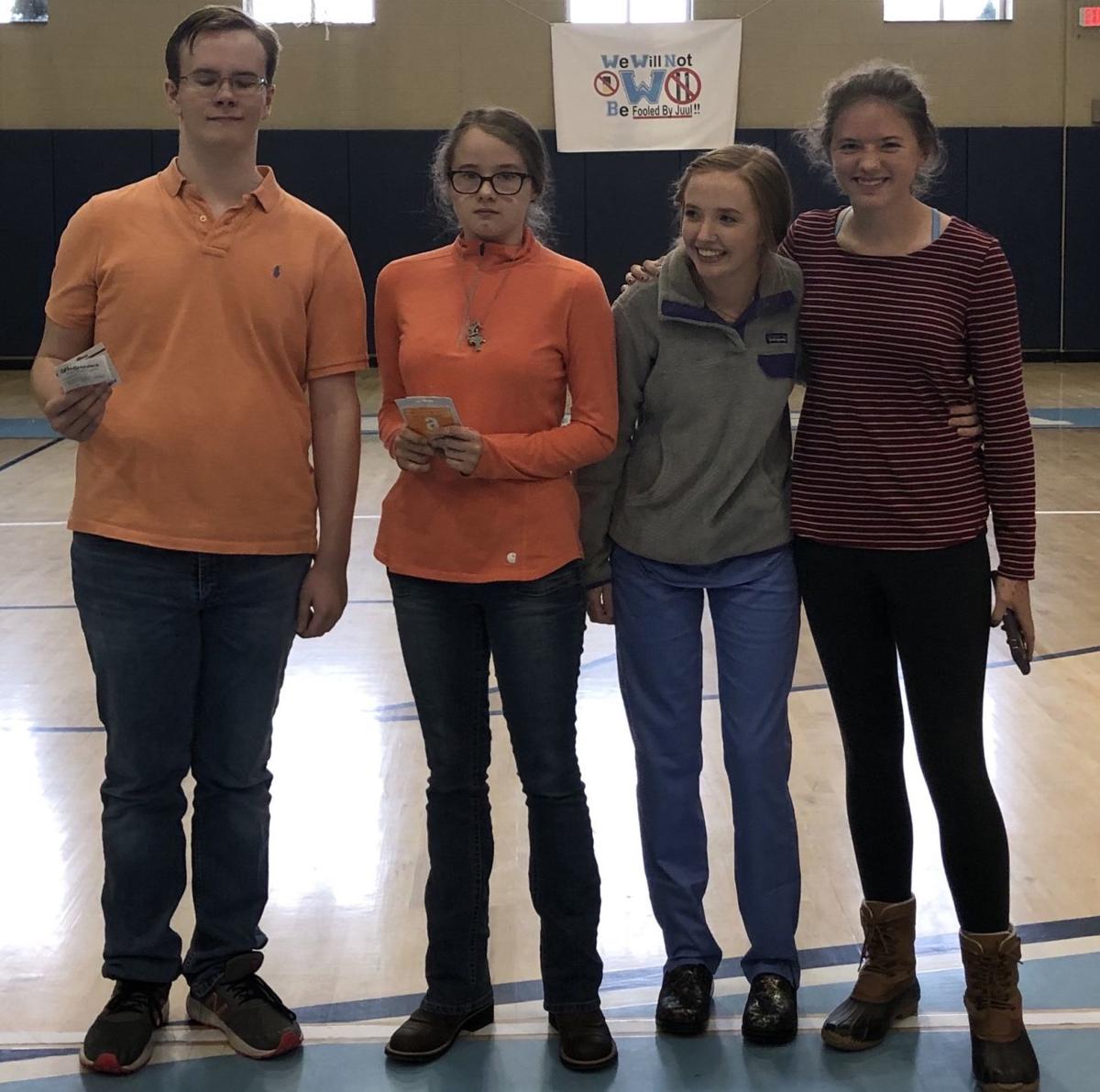 Jackson Miller and Andrew Freeman show off shirts with the phrase, ‘We will not be fooled by Juul.’

Watauga High School — with the help of Go Postal — creates decals for an anti-vaping campaign.

A 16-year-old recently made stops in Watauga, Ashe and Avery to share his story after completing a stay in rehab due to an electronic cigarette addiction.

According to the Centers for Disease Control and Prevention, electronic cigarettes — also known as e-cigarettes or vapes — are battery-powered devices that can deliver nicotine and flavorings to the user in the form of an aerosol.

While e-cigarette aerosol generally contains fewer harmful chemicals than smoke from burned tobacco products — like regular cigarettes — the nicotine is highly addictive and can harm brain development (which continues until about age 25), according to the CDC. The agency also suggests that young people who use e-cigarettes may be more likely to go on to use regular cigarettes.

Luka Kinard, a high school junior from High Point, said he started using vaping products to fit in with the older crowd. Kinard shared his story of how his vaping use transformed into an addiction with Watauga High School students on Nov. 4, with help from AppHealthCare. He also visited schools in Avery County on Nov. 13 and Ashe County on Nov. 14.

“We know there are risks with vaping,” said Jennifer Greene, the health director at AppHealthCare. “Unfortunately, these risks can be life threatening, as we have seen with the severe lung injury cases across the country, and additionally, there are longer term risks that are still unknown. We applaud the schools’ efforts to remind our community members that vaping is not risk free.”

Noticing the trend at WHS, Watauga County Schools Lead Nurse Shelly Klutz attended a National Coalition Academy training last year through the Watauga Substance Abuse and Prevention group. During the training Klutz focused on creating a model of how to approach vaping product usage at the high school level. She started asking the students about what they knew about vape products and if they knew about the dangers.

She said most of the students she spoke to had borrowed vape products from friends or had someone else buy the product for them. Of the 25 students she surveyed, roughly 13 of them said they were using a vape product more than 20 times a day.

The rise in young people using nicotine vaping products is one that Watauga County Schools officials have noticed in recent years. The Watauga Board of Education was presented in February with results from the 2018 Youth Risk Behavior Survey — a national school-based survey that provides data on health risks. The survey identified e-cigarette use by Watauga students as a public health concern for the schools.

Kinard was introduced to chewing tobacco when he was in the eighth grade and eventually started smoking cigarettes and cigars. It was during a high school football game that he was introduced to e-cigarettes, and said he was told it was vegetable oil in the product and it was supposed to be safer to use.

Kelly Kinard said she had found her son using regular cigarettes and then noticed when he made the switch to using a vape. She said she then started researching vaping products.

“All I could find online was that it was a healthier alternative to smoking and was a good way to wean off of smoking,” Kelly Kinard. “We said he could do it for a week. But during that week I realized he wasn’t weaning himself off of it; he was actually vaping nonstop.”

Kelly Kinard started finding “Juul pods” all over her son’s room. A Juul is an increasingly popular vape product that has nicotine liquid refills called “pods” in various flavors.

“All Juul e-cigarettes have a high level of nicotine,” according to the CDC. “According to the manufacturer, a single JUUL pod contains as much nicotine as a pack of 20 regular cigarettes.”

At first, he was only using the vape a few times a day in the bathrooms at school or a few times at home, Luka Kinard said. This eventually progressed to smoking four pods each day. He said at the time he didn’t see vaping as an addiction, and felt like he was a victim — it was him against the world.

“It got to the point where I was doing it every single day, all the time,” Luka Kinard said. “The only time I didn’t do it was if I was asleep or I was in the shower.”

During this time, his mom started to notice a difference in his attitude but didn’t connect it to his vape usage until later. She said he started showing all of the signs of addiction, and that it got to the point where it was difficult to have conversations with him. In the fall of 2018, Luka Kinard experienced chest pains and cold sweats for several weeks before suffering from a grand mal seizure.

Drug screens and visits to a pediatrician and cardiologist couldn’t determine what caused the seizure. The Kinards reported the situation to the Food and Drug Administration, and Luka Kinard said other people had reported seizures after vape usage as well.

“The FDA has become aware that some people who use e-cigarettes have experienced seizures, with most reports involving youth or young adult users,” the FDA stated in April. “Seizures or convulsions are known potential side effects of nicotine toxicity.”

Luka Kinard said he has been sober from electronic cigarette usage since Oct. 21, 2018. While he exited rehab with every intention of continuing to vape, he said he has since decided to continue sobriety and share his story with other young people to warn them of the dangers of vaping.

“Just because it’s just nicotine, it’s still a substance abuse issue and it’s still an addiction,” Luka Kinard said. “Generally when we think of addiction we think hard drugs … we don’t typically think of somebody using nicotine. Just because it may not seem horrible now, it can get there.”

Luka Kinard first shared his story with the Wall Street Journal that December and has since traveled around to speak to groups in North Carolina, South Carolina, Minnesota, Montana and other states to share his story. Inquiries about Luka Kinard speaking to a group can be made by contacting Kelly Kinard at klbkinard@yahoo.com.

He traveled to WHS to speak during the school’s “We Will Not Be Fooled by Juul” campaign week Nov. 4-8. The week’s slogan was created by 11th-grader Mahala Hicks that was then posted on decals and posters with the help of Go Postal. Decals were also made with a phrase created by 12th-grader Henry Jones — “Very Addicting Personal Expense” — which was an acronym for VAPE.

Each day of the campaign week had a different theme with educational games and activities for students to learn facts about vaping, Shultz said. The Thursday of that week featured an activity where students would jog around while also being able to breath through coffee straws to demonstrate what lung damage would feel like.

“Even if it was just one, it would’ve been all worth it,” Shultz said.

The campaign week was a collaborative effort among representatives from WCS, the Western Youth Network, AppHealthCare and Appalachian Regional Healthcare System with assistance from public health students at Appalachian State University.

Students who want information on how to quit can visit teen.smokefree.gov or truthinitiative.org. Information for parents and the general public can be found by visiting e-cigarettes.surgeongeneral.gov/documents/SGR_ECig_ParentTipSheet_508.pdf or www.tobaccopreventionandcontrol.ncdhhs.gov/ecigs.

yeah, there are chemicals in Vape juice, like 3 of them. You can also get vape juice without nicotine. Also, the chemicals used are pharmaceutical-food grade. Get them to quit vaping, then what? Nicotine lozenges at walmart? Putting anything in your lungs is not good, but this is the same hysteria I remember about cigarettes and kids. Cigarettes still kill tens of thousands of people a year, and HS kids smoke cigarettes more then e-cigs.