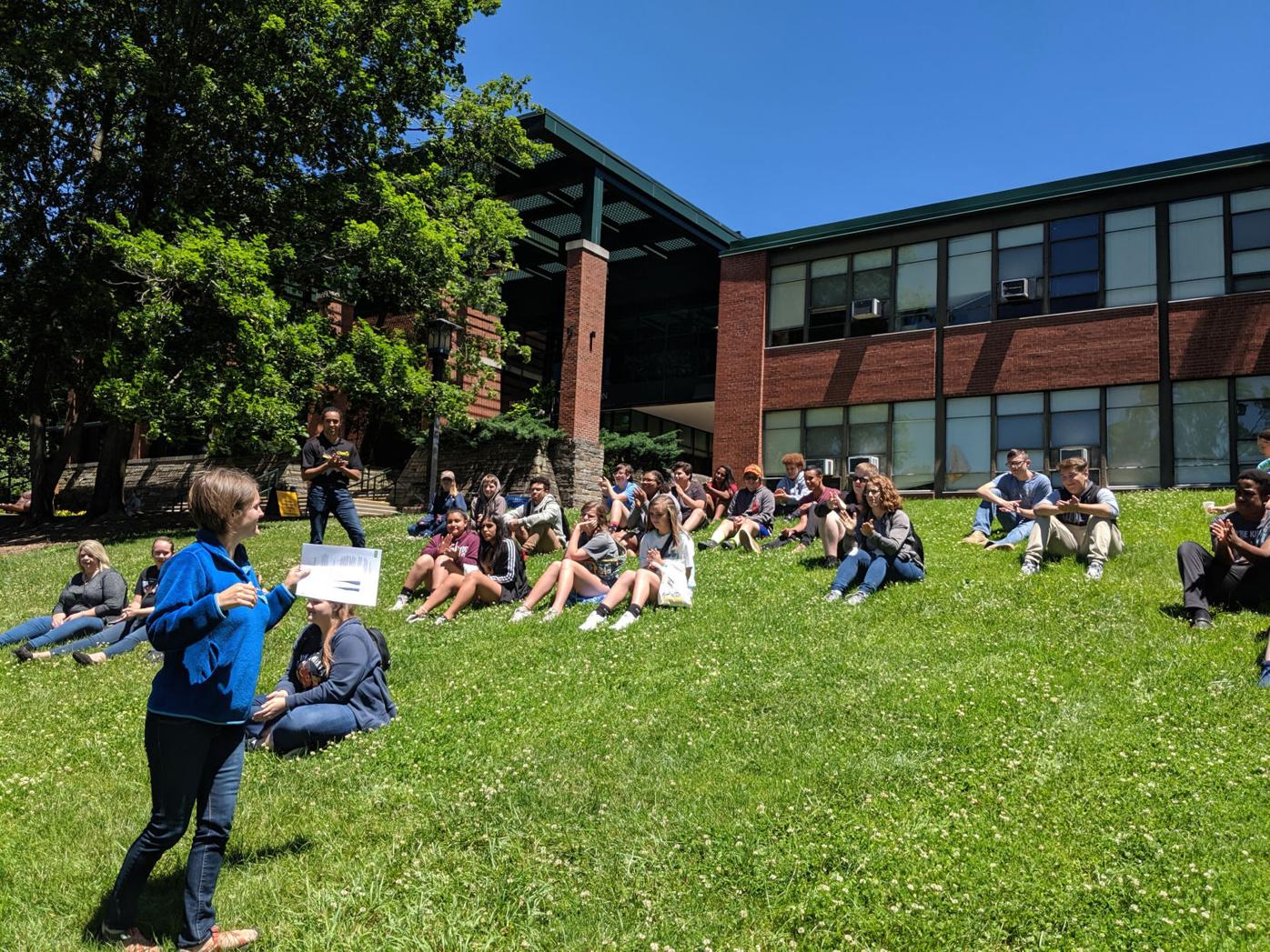 Appalachian GEAR UP prepares students to attend and excel in postsecondary education through a variety of programs and resources. Pictured are GEAR UP students on a tour of Appalachian State University’s campus in summer 2019. Shari Williamson, assistant director of programming implementation for Appalachian GEAR UP, is pictured at bottom left. 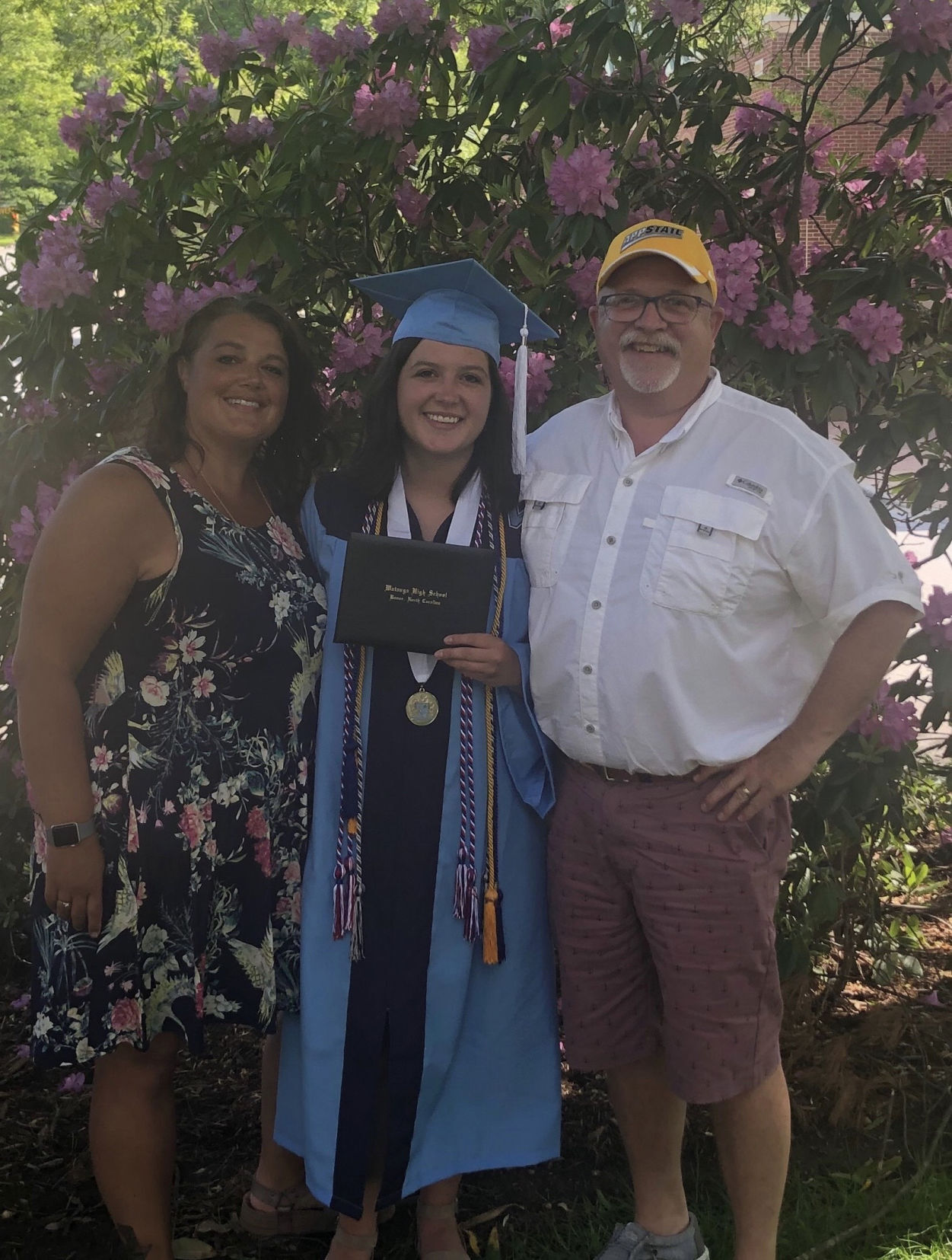 Emma Shew, who graduated from Watauga High School in Boone last spring, center, participated in Appalachian GEAR UP and, in fall 2020, began her Mountaineer journey at Appalachian State University. She plans to major in English with a concentration in professional writing. She is pictured with her parents on App State’s campus.

The incoming students from these districts have participated in Appalachian GEAR UP (Gaining Early Awareness and Readiness for Undergraduate Programs) since they were in middle school, and they are among the program’s first graduates. GEAR UP is a federally funded college access program designed to increase the number of students who are prepared to enter and succeed in postsecondary education after high school.

To Shew, GEAR UP was life-changing. Through GEAR UP, she said, “I had access to so many opportunities I wouldn’t have been able to access otherwise. GEAR UP-sponsored college visits, parent workshops and summer programs like the one I attended in San Francisco. These were all events and opportunities that had a major impact on my postsecondary education and helped me make the best decision about attending college.”

“We are thrilled that so many GEAR UP students have chosen Appalachian to continue their academic journey. This program has significantly improved access to App State for students across Western North Carolina,” said Cindy Barr, App State’s associate vice chancellor for enrollment management.

App State announced the GEAR UP Guarantee program last fall, offering automatic acceptance to any students in the GEAR UP school districts who meet application deadlines and academic requirements, including a minimum weighted GPA of 3.50 and the following minimum course completions:

Six course units in language, including two in a language other than English.

When asked how difficult it was to meet the program’s academic requirements, Shew said that while she was definitely challenged academically, GEAR UP also affected her personal life.

She and some other Watauga County students attended a leadership summit in San Francisco that, she said, “was pretty uncharacteristic of me to attend, as it was something that was so far out of my comfort zone. I was certainly challenged by this experience, but it was one of the most rewarding weeks of my life. To this day I’m continuing to utilize the skills I learned there.”

Clearing a path to success

About the GEAR UP Guarantee, Appalachian GEAR UP Director Corinne Smith said, “We wanted to create a transparent, less stressful college application pathway for GEAR UP students. As we are seeing the first cycle of GEAR UP seniors enrolling in college, we are so pleased to see and hear all the stories from our participants about how much of an impact the program had on them. In many cases, it far surpassed what we ever imagined.”

Now mid-semester in her first academic year at App State, Shew said she is performing well in her studies, and that the classes she took during her high school senior year and at Caldwell Community College and Technical Institute helped prepare her for the challenge of university academics.

“Being mostly online has been a difficult adjustment to make, but a necessary one. GEAR UP, and more specifically, Ms. Laura Turner, my counselor since sixth grade, have definitely helped make this adjustment easier,” Shew said. “She really encouraged me to get outside of my comfort zone and work harder in my academics, which is what I think benefited me the most from this program.”

Jody Freeman ’89, a GEAR UP coordinator for Wilkes County Schools who earned a Bachelor of Science in criminal justice from App State, said the GEAR UP program has been a wonderful opportunity to create change in the community, as she works with students and their families to explore college and career paths.

“There is a lot of stress for high school seniors during the college application process. Having guaranteed admittance at a college they are familiar with provides our students a sense of security,” Freeman said. “Some of these students have been attending weekend camps and summer programs at Appalachian through GEAR UP since they were in middle school.”

Particularly in the case of first-generation students — those who are the first in their families to attend college — Freeman said App State’s proximity to the GEAR UP school districts is attractive to students who want to attend a university close to home.

Almost half, or 47%, of the GEAR UP students attending App State this fall are first-generation students.

Shew, who is the first member of her family to attend college, said when she was first aware of GEAR UP in middle school, “college was something I was interested in but had no idea how to obtain. I could’ve never imagined that now, six years later, I would actually be attending college and living on campus, no less. GEAR UP definitely taught me that college is something attainable for everyone, if you utilize your resources correctly and persevere through the challenges.”

Glenn Miller Jr., who earned a Bachelor of Social Work and a master’s in professional school counseling from App State, is a school counselor at North Wilkes High School in Wilkes County. He said the GEAR UP Guarantee program generated a lot of excitement at his school.

“I believe the program brings App State closer in line with its original vision of educating our rural mountain students,” he said.

The university will continue to offer the guaranteed acceptance to GEAR UP graduating classes over the next three years.

“We are hopeful that the program continues to help students imagine themselves as college students, whether it is at Appalachian or elsewhere,” Smith said.