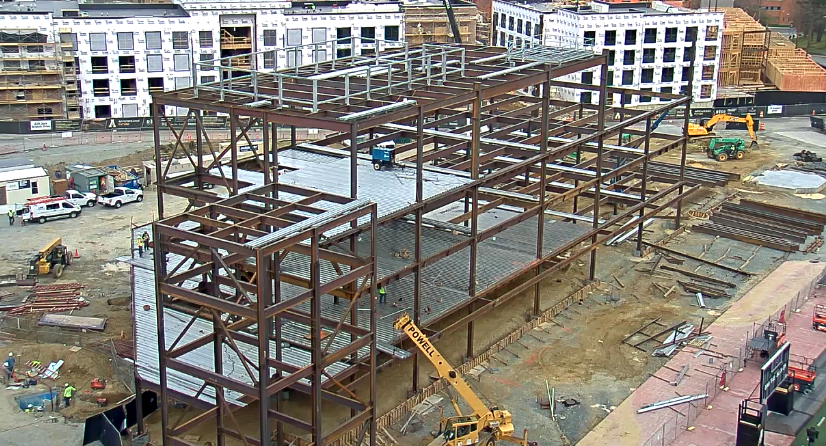 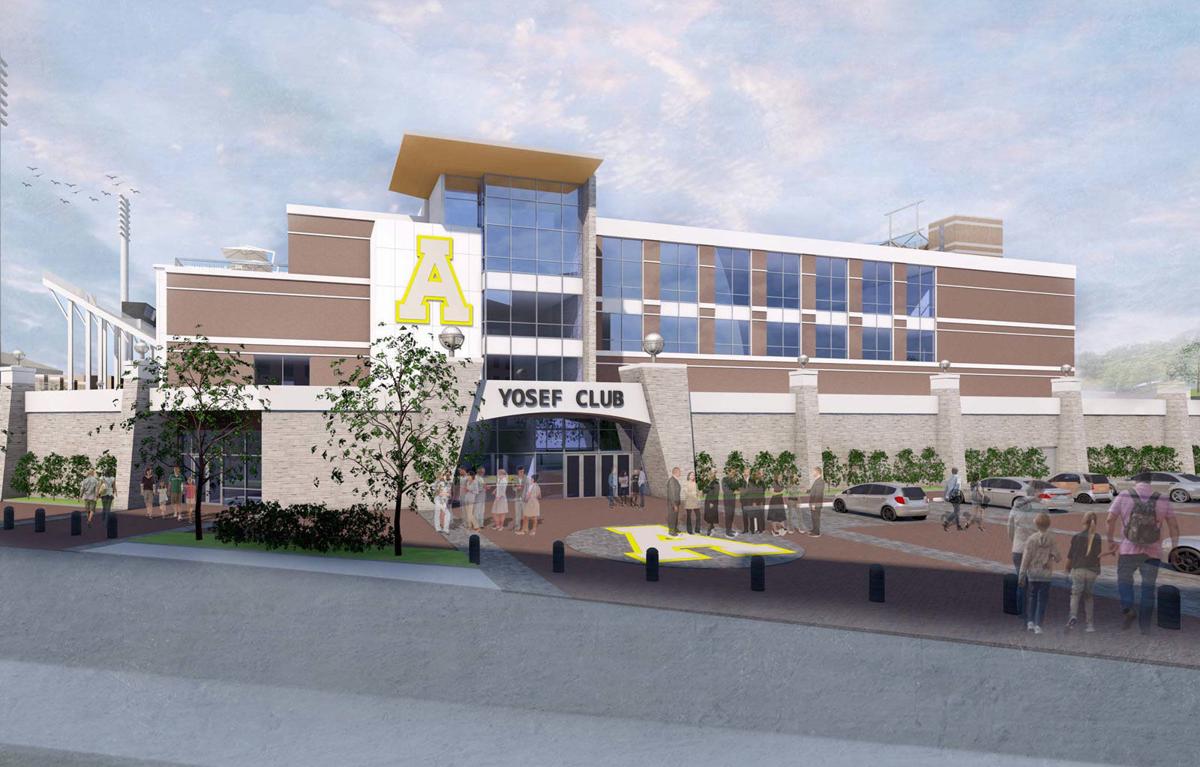 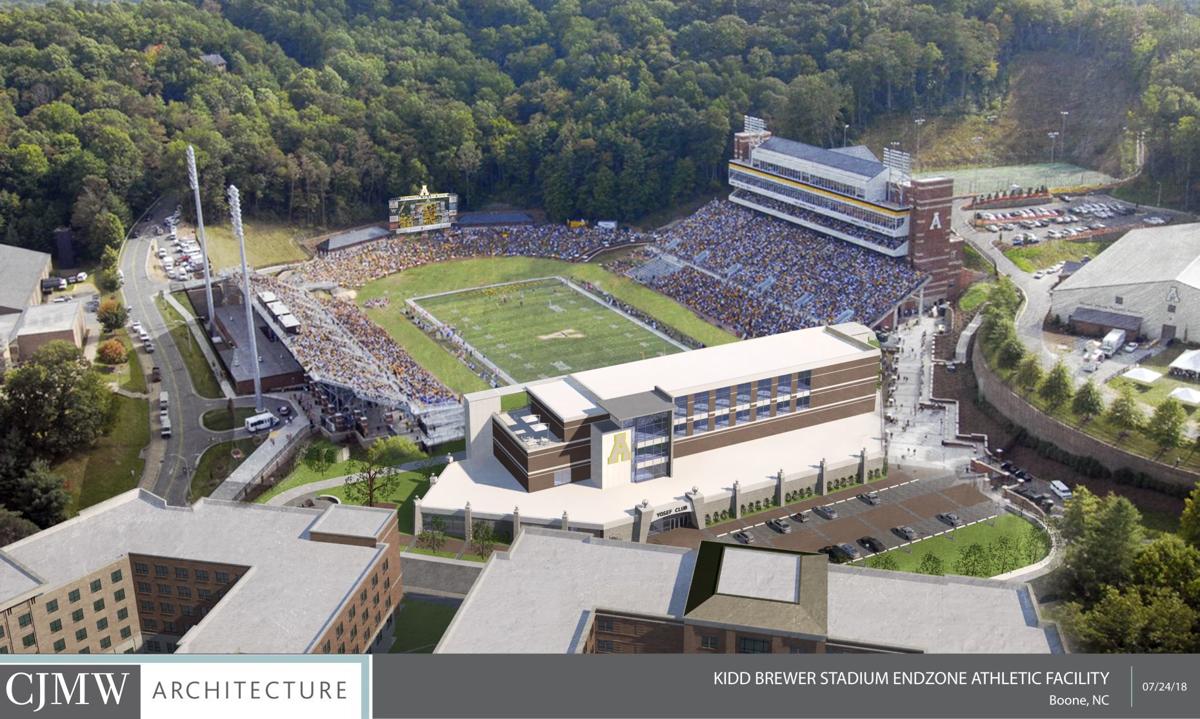 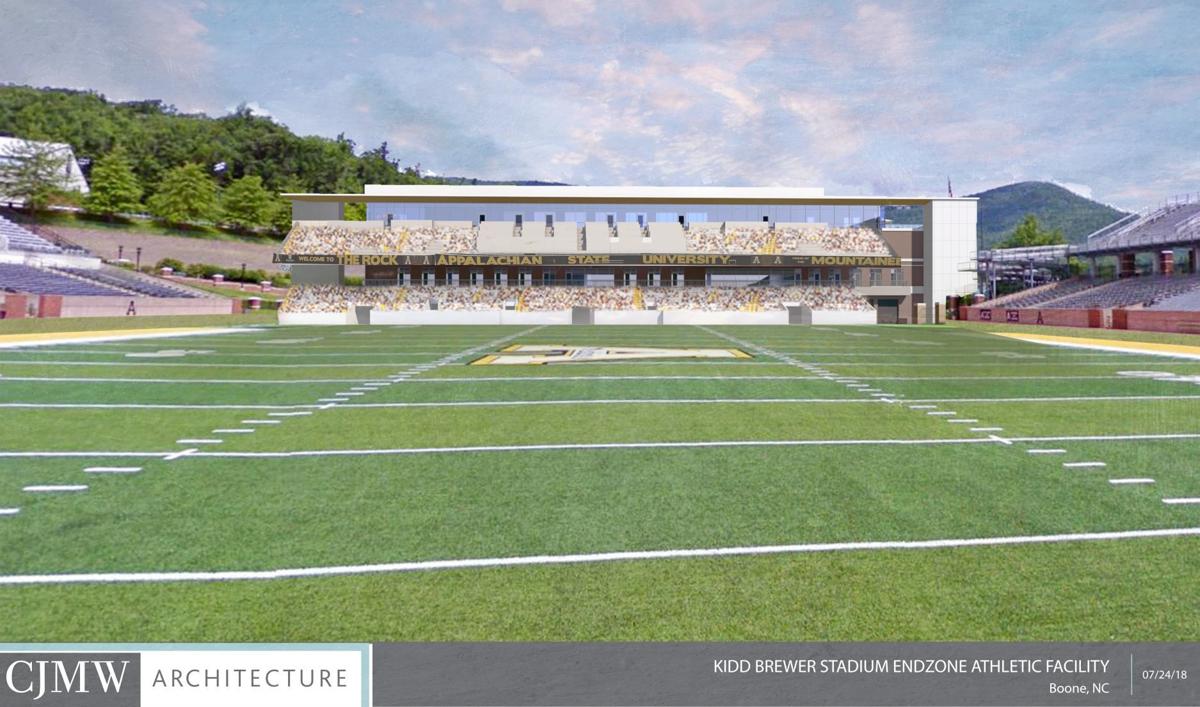 BOONE — Due to what Appalachian State Board of Trustees Chair John Blackburn called a “tight construction market,” the board approved a $5 million increase in the university’s Kidd Brewer Stadium north end zone project budget on Nov. 5.

The board members met via conference call to discuss the project’s increase from $45 million to $50 million. The project — which ultimately is replacing the now-demolished Owens Field House — is proposed to be partially completed by the opening of the football season in fall 2020.

The facility will include a conference and continuing education training space, an orthopedic clinic, dining facilities, a team store, hydrotherapy, approximately 1,000 premium (club) seats and offices for coaches and athletics staff.

Vice Chancellor for Business Affairs Paul Forte explained that in order to keep the project on track for next fall’s opening, the 43 bid packages for the project had to be bid out in stages. Three bid packages that were sent out had zero bidders and 11 packages only had one bidder, Forte said.

“I think there’s a timing issue on the end zone,” Forte said. “We knew it was being built at the top time of a robust economy. We just didn’t have the bidding interest we thought we were going to have.”

Five of the subcontractors — including tasks such as electrical HVAC, masonry and structural concrete — resulted in about $4.5 of the $5 million increase, according to Forte.

He added that the town has roughly $400 million worth of projects being built simultaneously, and for that reason the university has struggled with getting bidders. Michael Behrent, Faculty Senate chair and non-voting member of the board, asked if it were possible that App State’s own student growth was indirectly contributing to the growth of town construction and therefore causing higher costs for the university.

Forte responded by saying he talked with Boone Town Manager John Ward, and while some housing construction was for housing that could be student related, others are private developments, hotel projects or higher quality condos.

According to Blackburn, most university projects have typically experienced 10 percent overage in costs, and this increase likely follows that pattern “that sometimes happens.”

Forte added that in order to get the project completed on time, the increase needed to be approved. If the project is not promptly completed, other university revenues would have been put at risk.

“It’s unfortunate but I feel like it’s something we need to do,” Blackburn said.

The board unanimously made the approval. Forte said while the university didn’t anticipate going over budget, there were available revenues through auxiliary trust funds and athletics donations to pay for the increase. He added there would not have to be added cost or fees to students due to the increase.

The board also approved $2,538,880 for replacement of the synthetic turf at Kidd Brewer Stadium. Forte said the current field is at the end of its useful life, as it is 10 years old. Additionally, the construction of the end zone project has reshaped the layout of the stadium, which requires the modification of the turf. The hope is to also have this installed before next year’s football season, he said.

The project is funded by auxiliary trust funds and the athletics facility debt fee paid by students.

These two items will go before the Board of Governors — with the next meeting being Nov. 14-15 — for approval.

As a taxpayer, why would I want my taxes to go to Appalachian if so much of it is going to pay for athletics. I'm fine supporting academics, but I don't want my hard earned money going to pay for a tailgate party and a bunch of games. As far as I can tell, the funding per student should be lower until Appalachian gets it priorities right.

Shelto. You are not very informed. Funding per student is determined by the campus' academic programs. Campuses with more graduate programs and professional programs get more per student, and for good reason because UNC faculty teach less and Medical Schools cost more. NC A&T is a research intensive campus. App is not.

If we want to get the same funding per student, then we should focus on academics instead of athletics! This administration doesn't care about academics or quality. Just numbers, dollars and football.

What NC university is App most academically comparable with? How much of the athletic budget goes towards football?

Athletics is a financial black hole. Athletics loses $25 million every year!! This is paid for by students fees and taxpayers. They build unnecessary athletic facilities because they can pass the bill to students and taxpayers. Sadly, Appalachian prioritizes athletics over academics. Just look at what they spend money on. The university spends more than TWICE as much covering the losses of athletics than it spends on the library and student services! Academic centers and institutes are told to be financially self sufficient, but athletics can lose $25 million every year....and the deficit increases every single year! How does the state allow a university to have such backward priorities?

Scott you should use that energy to write the folks in Raleigh and ask why App St. has the lowest appropriation per student of any public university in the state? If the state bumped App up to NC A&T's level (2nd lowest), it would increase the university's budget from the state over $10m+. If it got increased to UNCG's level (5th lowest), the budget gets increased by $30m+. Now hold on to your hat, if appropriations matched UNC's, App's budget would increase by $180m+. As a taxpayer, you should be pissed that some students in NC are getting twice the funding as the App students. That additional funding could go towards the library and student services you seem to care so much about.

As for athletics, I'd venture to say a majority of those student fees go to support the non-revenue sports so it sounds like your beef is with Title IX.

See the comment above for an explanation of funding per student. However, funding per student and Title IX is NOT related and they are NOT an excuse to waste money. Taxpayer money. It is shameful (and contrary to the purpose of App) that the university to spends $25 million every year (and growing) on subsidizing entertainment when academics is underfunded, classrooms are outdated, instructional space is insufficient, and student support is well below needs. Athletics is replacing relatively new facilities to be competitive, but there is no concern that academic facilities are not competitive, outdated, and are far behind our peers. If the budget shows what the university cares about, then it doesn't care about academics. And its telling that the leadership so easily found $5 million to bail out athletics again when academics has to fight tooth and nail to get half of this amount. Failure of leadership. App has lost its way. And to correct your other comment. Football eats up far more than its fair share of the athletics budget. It's not close.

Ditto on App State and the low funding appropriated by the NC legislature relative to other NC universities. Some may not agree, but the fact is that the university receives media and advertising exposure worth millions after a Top 20 ranking in football (highest ranked NC team), which translates to hard dollar benefits for the university. The exposure leads to more student interest and applications and other benefits. If one does not see a value in advertising and promotion of the university so be it, but the fact is that it is valuable and provides a great ROI.