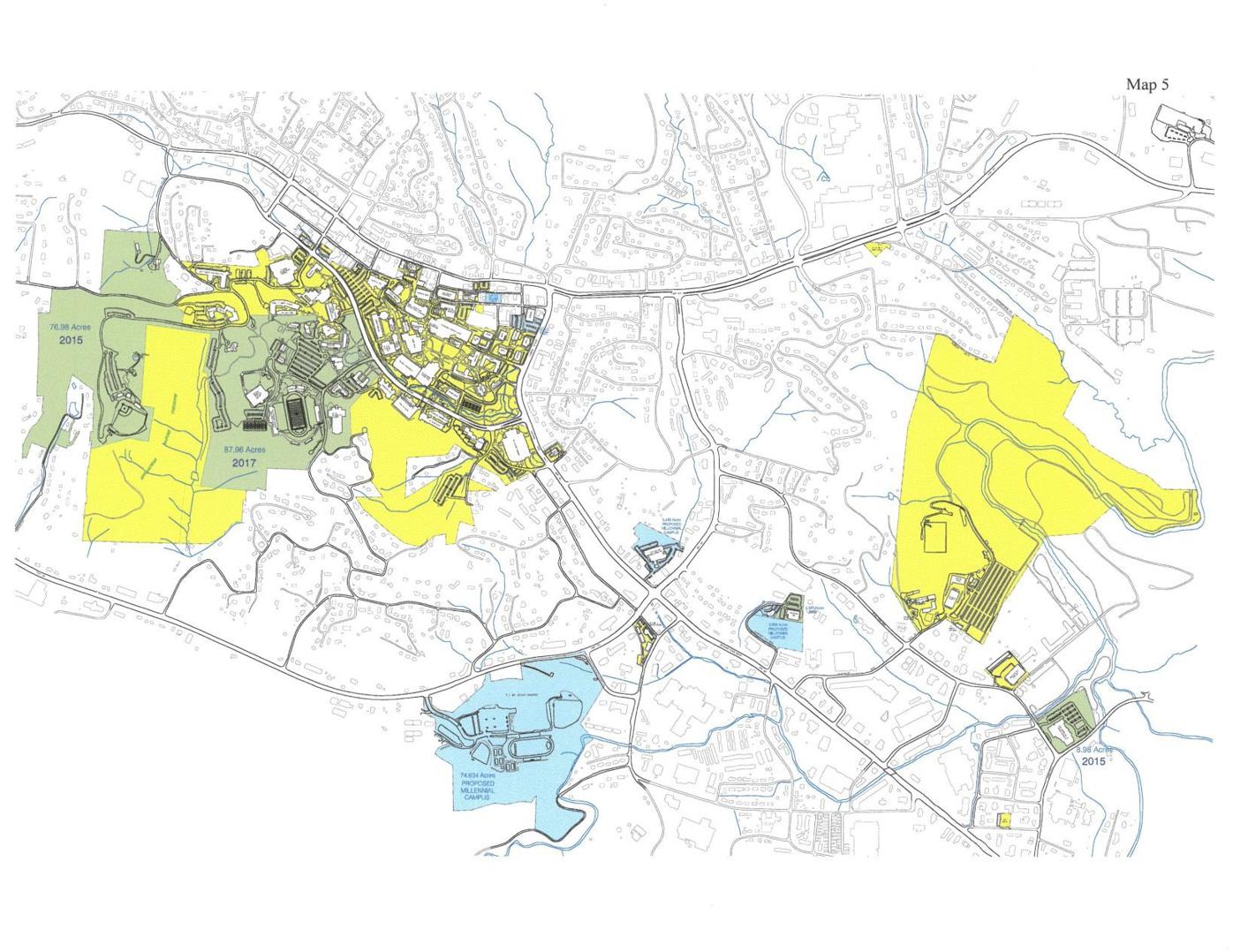 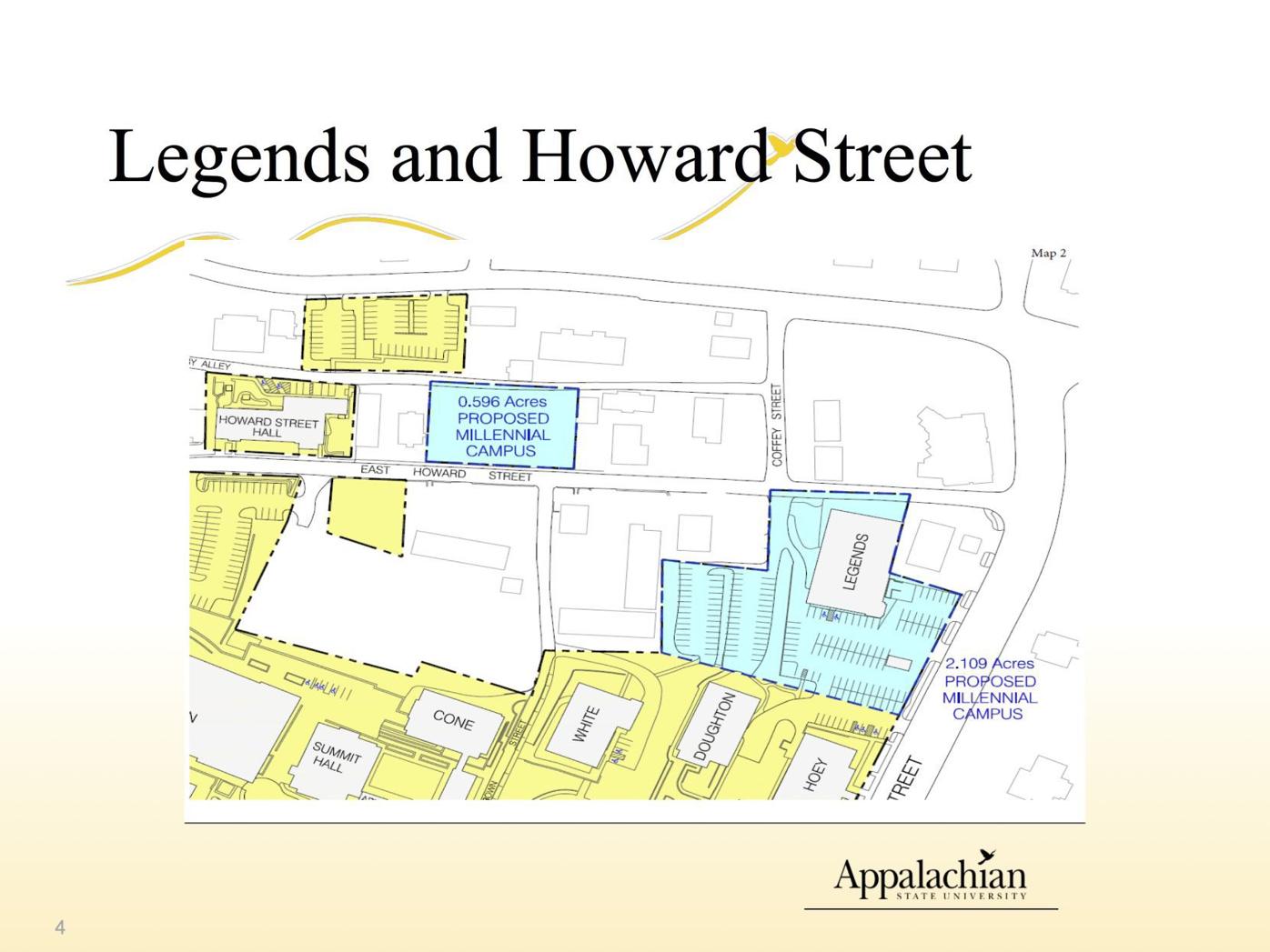 This map indicated two areas — on Howard Street and at the site of the current Legends venue — identified for potential Millennial Campus designation.

This map indicated two areas — on Howard Street and at the site of the current Legends venue — identified for potential Millennial Campus designation.

BOONE — With a $182 million public-private housing project in the works near Kidd Brewer Stadium, Appalachian State is eyeing even more areas on campus for potential public-private development.

The designation request will go before the UNC system Board of Governors for approval.

For university areas to be designated as millennial campuses, there must be findings that creation of the campus “will enhance the institution’s research, teaching and service missions” and “the economic development of the region served by the institution.”

According to a presentation given to trustees on June 21, Millennial Campus designation “increases public-private opportunities for housing, conference and meeting space, health care facilities, student and faculty research, parking and more, and offers the potential to provide more affordable options for students.”

This spring, the university released a summary of the top 10 themes and ideas for the old Watauga High School property that emerged as part of input gathered earlier this year, with parking, event space, recreation and athletics topping the list.

The Legends site has been identified as an area for redevelopment in the past two campus master plans.

The campus nightclub and concert venue opened in 1985, originally opening as H’Appy’s and changing names in 1988. But last fall, ASU Vice Chancellor for Student Affairs noted that “any investment in continuing its operation at this location could be relatively short-term” and said a group was exploring other available opportunities and options that meet the programming needs but are more financially viable than renovating the existing building.”

ASU’s first Millennial Campus designation was in 2002, for the 2.3-acre University Hall property located off of Blowing Rock Road.

In 2015, ASU sought and received BOG approval for Millennial Campus designation for 74.98 acres including the former Broyhill Inn property and surrounding area, as well as the site of the future College of Health Sciences building near Watauga Medical Center, which is scheduled to open later this year.

That was followed in 2016 and 2017 by approval of Millennial Campus designation for an 87.96-acre area that includes much of the west campus, including Kidd Brewer Stadium and eight residence halls within the boundaries of Stadium Drive, Rivers Street and Bodenheimer Drive.

The university subsequently moved forward with two major projects at this site, including the aforementioned student housing replacement project and the $38 million north endzone project at Kidd Brewer Stadium, which is slated for completion in fall 2020.

ASU Chancellor Sheri N. Everts announced at the trustees meeting that a biology research facility and conservatory will offer a new location for faculty and students to conduct research at the former Broyhill Inn site. She said a dedication ceremony will take place during the Appalachian Energy Summit to be held from July 30 to Aug. 1.

Asked for more information about the project, ASU spokesperson Megan Hayes indicated June 25 that the university did not have additional details to share at this time. The Watauga Democrat has submitted a public records request for documents related to planning of the project.