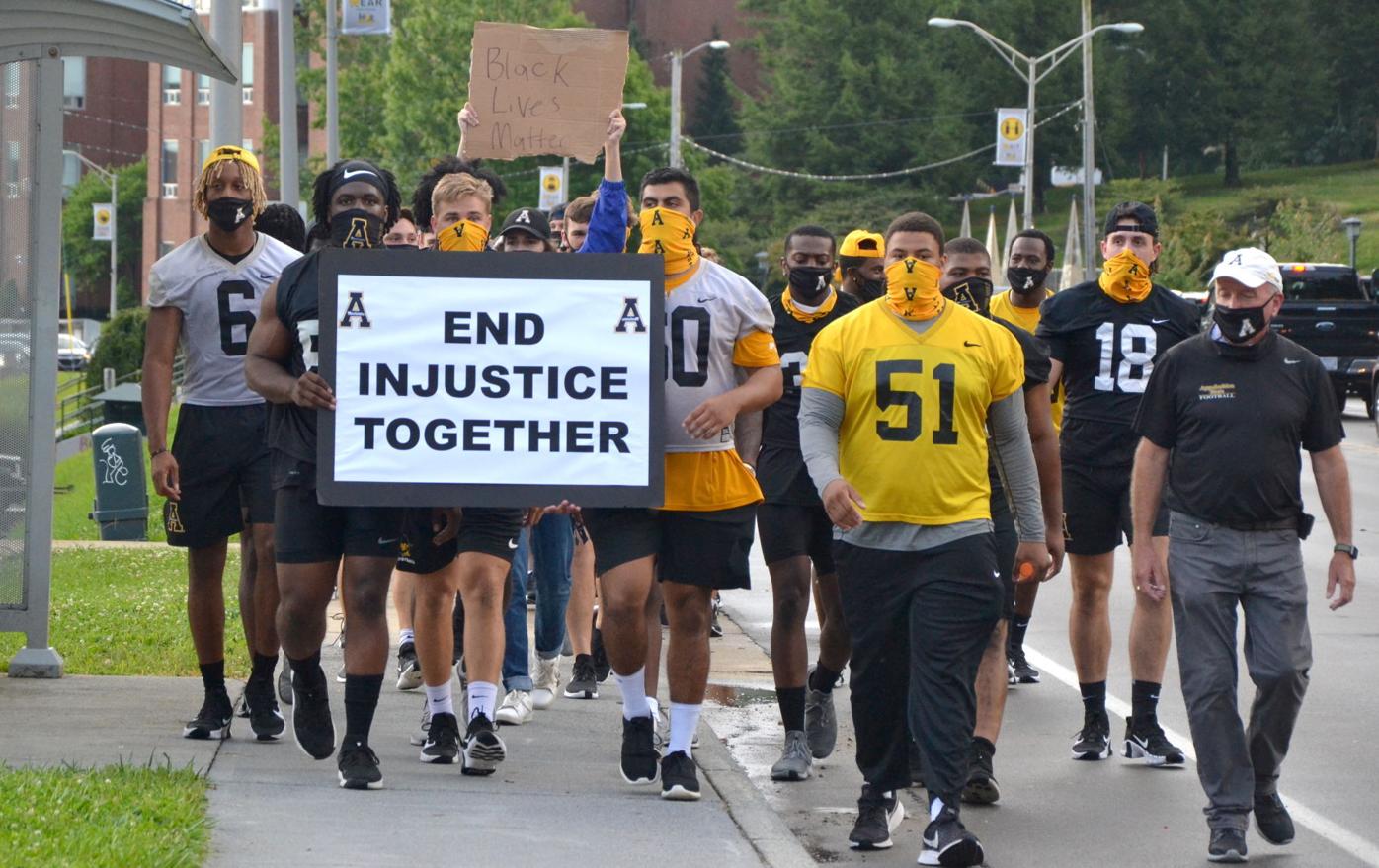 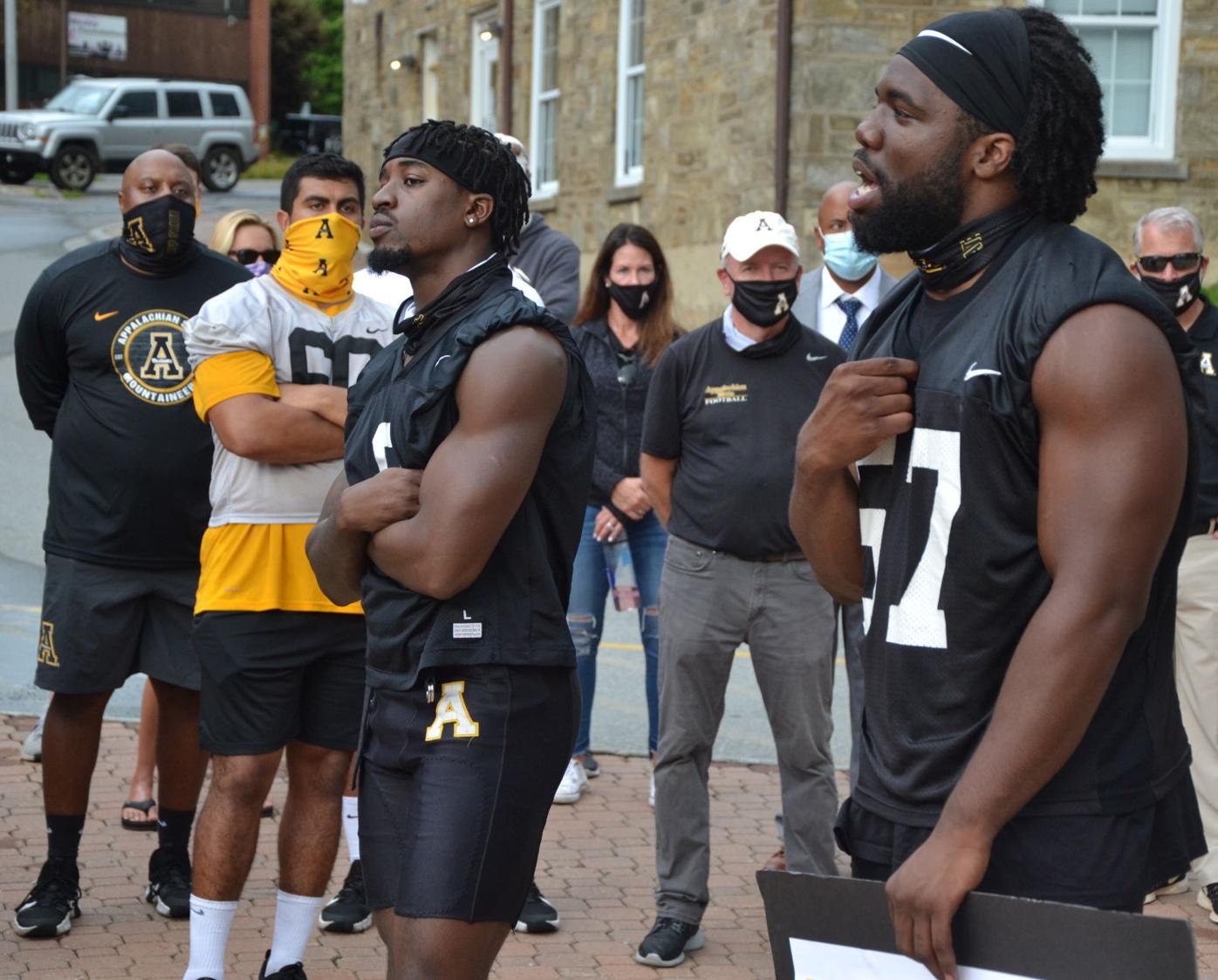 Shemar Jean-Charles (left) and Elijah Diarrassouba (right) talk to participants in an Aug. 28 march about their experiences as Black men and what they hope to see in the future. 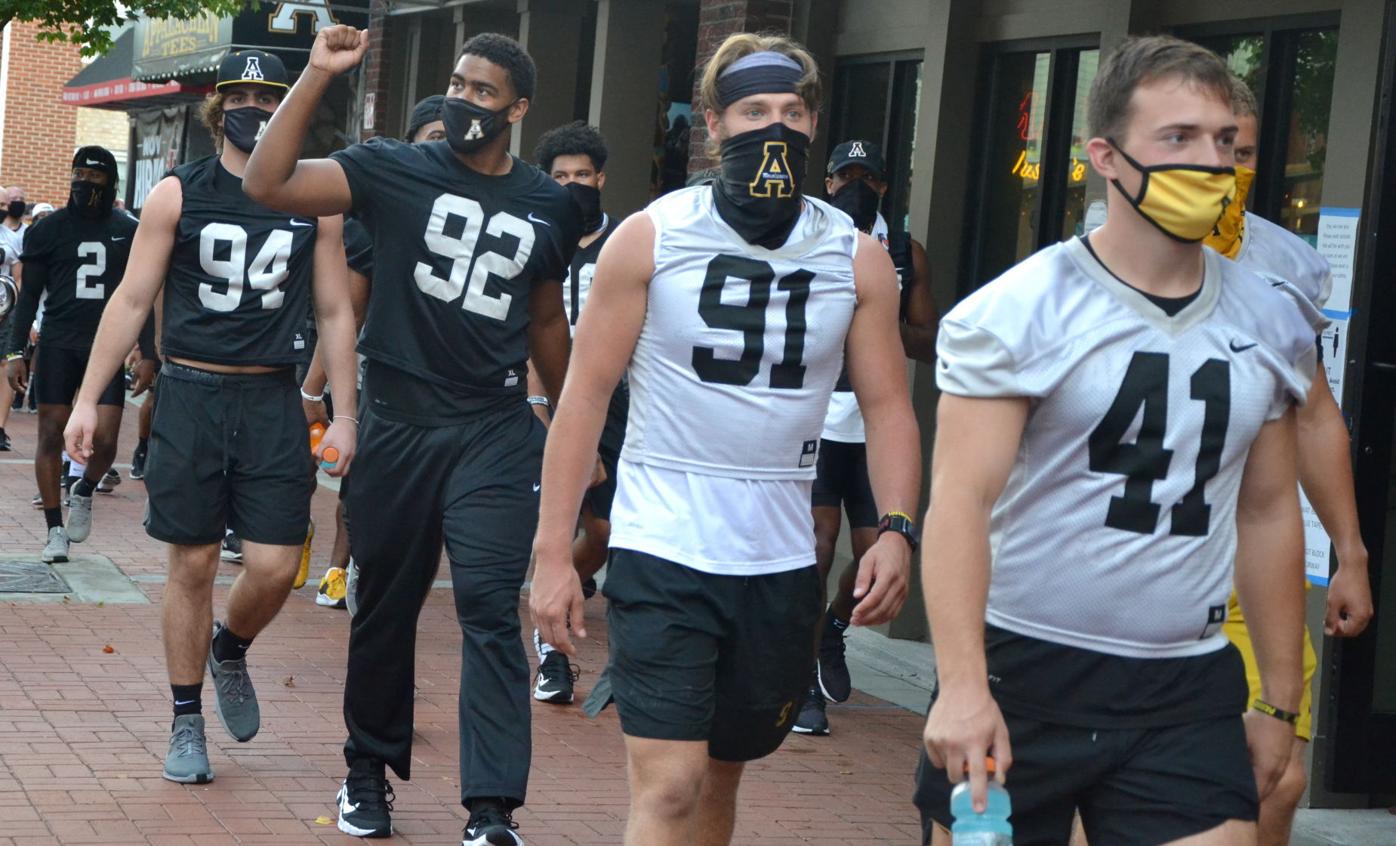 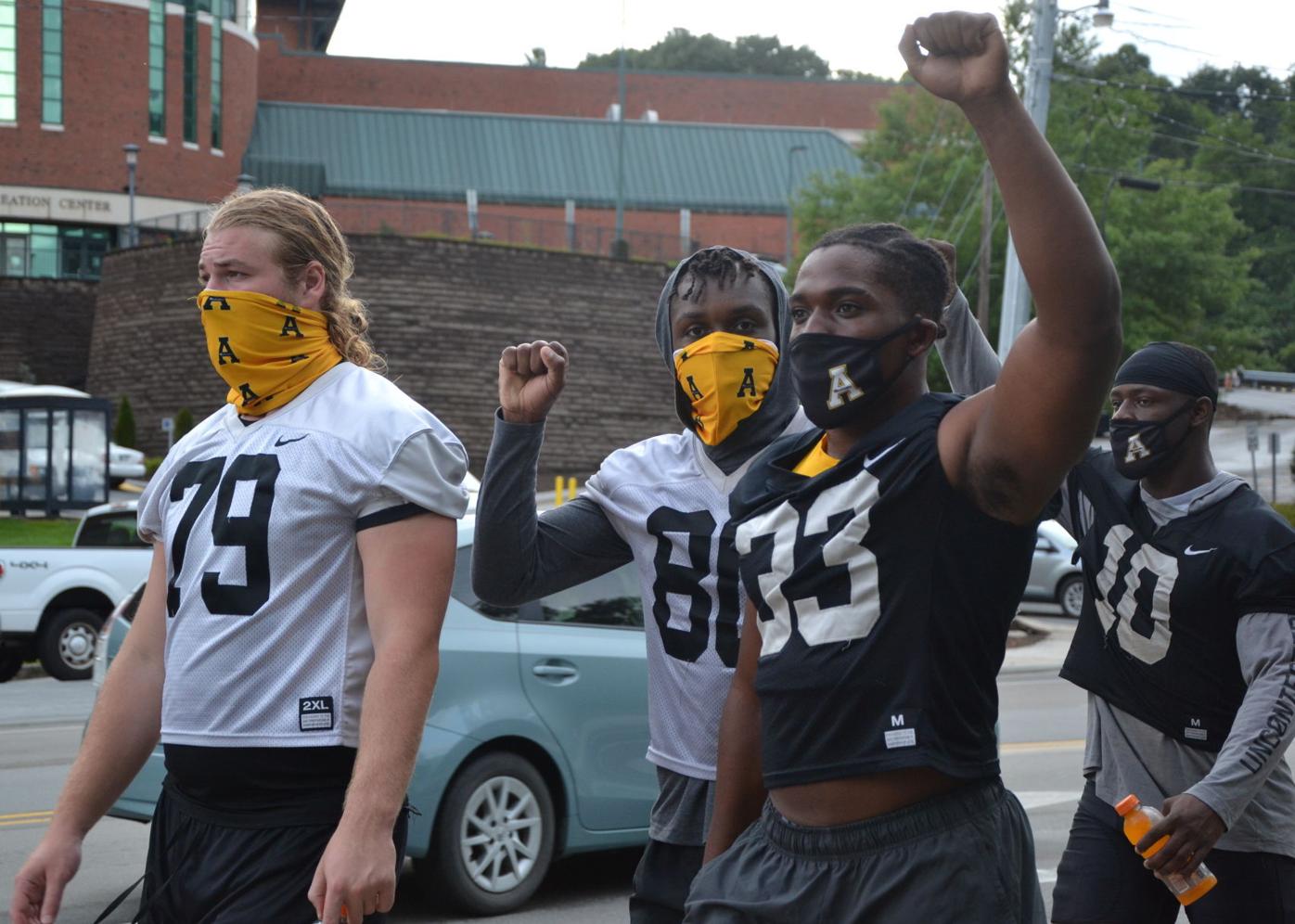 A group of Appalachian State University athletes, community members and others gathered together after a march against racial injustice on Aug. 28.

Although a drizzling rain fell on a crowd of Appalachian State athletes and community members, nobody moved while Mountaineer football players Elijah Diarrassouba and Shemar Jean-Charles spoke about racial injustice on Aug. 28.

“No matter what, you can’t quit,” Diarrassouba said. “People’s lives are at stake. People are dying. This is not a political statement. This is life.”

The group gathered in front of Peacock Hall after marching through the university’s campus and downtown Boone as a statement to “end injustice.” The act came one day after the football team decided to not take part in practice as planned, and instead have a conversation as a team about racial injustice.

App State head football coach Shawn Clark stated that the team decided as a unit that they weren’t going to practice; he said as the head coach it’s his job to ensure that he has his “players’ back no matter what.”

“As long as I’m the head coach, they will have the final say,” Clark said. “That’s why I love this team so much.”

The team called a meeting on Aug. 27, and Clark said the players wanted to speak to the coaches.

“To hear their stories, to be the dad of an 8-year-old and 11-year-old, it breaks your heart,” Clark said. “I don’t know how they feel. I’ve never been in their spot before. But I know what hurt is like. My players are my No. 1 priority, and we’re going to listen to them. We’re going to make a positive change. That’s why I’m so excited about this team right now. I love every single one of them and what they stand for.”

Several sports teams around the nation have made similar decisions, either to not play a game or to not practice to raise awareness about racial and social injustice. According to the Associated Press, NBA team the Milwaukee Bucks refused to take the court on Aug. 26 for a game against the Orlando Magic following the shooting of Jacob Blake in Kenosha, Wis. Nine NFL teams canceled practices the following day to protest racial injustice, the publication stated.

“Please don’t let this die down, because once I’m done playing football, I can no longer call myself an athlete — I’m a Black man in America,” said Diarrassouba on Aug. 28 to the crowd after the march. “I’ll no longer have that protection over me as an athlete. That’s why I’m using my platform to speak on behalf of the whole Black population.”

Diarrassouba is a senior defensive lineman for the Mountaineers, and said playing football is the only place he can get a piece of what he dreams the world can be. In and out of the locker room, he said the team is a family no matter the color of a person’s skin.

Diarrassouba then told a story of how he was driving his friend from Greensboro to Miami, Fla., on Easter after his friend experienced the death of his mother. The two men were pulled over near the North Carolina and South Carolina state line, and Diarrassouba said the police officer asked why the car had a Georgia license plate — the car was a rental.

“We weren’t disturbing (anybody),” Diarrassouba said. “They search the car. They tell us to put our hands on the roof, spread our legs apart. They pat us down — found nothing. They brought a dog out there, searched around the car (and then) popped the trunk. We have two duffle bags; (they) poured our clothes out. They saw nothing. The guy who did everything, the only thing he said was ‘y’all have a great night.’ He didn’t put our stuff back in the bag, didn’t apologize, didn’t say I’m praying for you — nothing. I’ve never felt that low in my life.”

Diarrassouba said society paints a picture of him as a criminal or a “thug” since he has dreadlocks, dark skin and is a bigger guy.

“Not one time did they think of me as a double major, or a guy who came from nothing who worked his way up to get to school,” Diarrassouba said.

He added that the work against racial injustice is going to take effort from all types of people because the Black community is “struggling right now.” Jean-Charles — a senior defensive back — told the group to spread positive emotions and start having small conversations to enact change.

“That’s what drives the world,” Jean-Charles said. “You’re not born racist. It’s taught. It’s going to take everybody. If everybody puts their foot down and pushes for this, it can really happen.”

So they are privileged enough to attend ASU, but completely oppressed? I have a child who can’t leave his home without a cop behind him with a trumped up excuse to arrest him. Same thing for my brother who literally got beat by cops IN THIS COUNTY, that was terminally ill. If that is white privilege, we got left out. BLM, all of it is being pushed to far and it’s scary. Sad times

As critical as I am about the Athletics program at App, and the fact that it's such a complete money pit and drain on university resources (and the wallets of students and taxpayers), I've got nothing but respect for our student athletes themselves. Gotta give props to these athletes, in particular. It's extremely refreshing to see y'all standing up and making your voices heard. Keep it up! Your voices and your actions matter!!

Hope they tell these kids that the criminals that were shot had weapons and didn’t comply to officer commands.

That’s the truth. In their eyes, being combative with authority is acceptable, no such thing as law or rules. They believe that they are exempt!