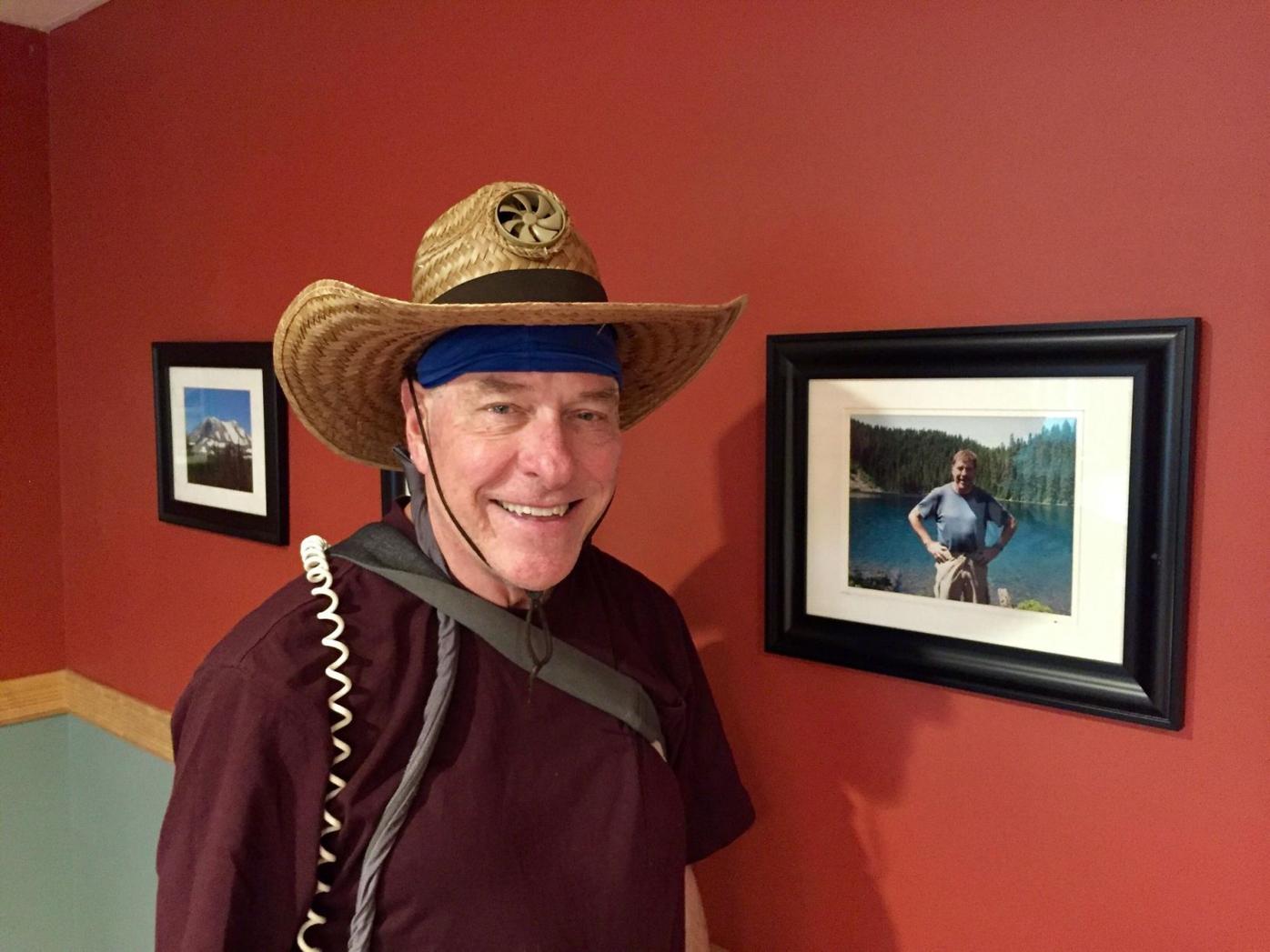 Boone hiker Jeff Williams shows off his solar-powered hat beside a photo of himself on a trail. His hat, which he wears to keep his head cool on walks when he wears his Optune treatment cap, features a built in fan. 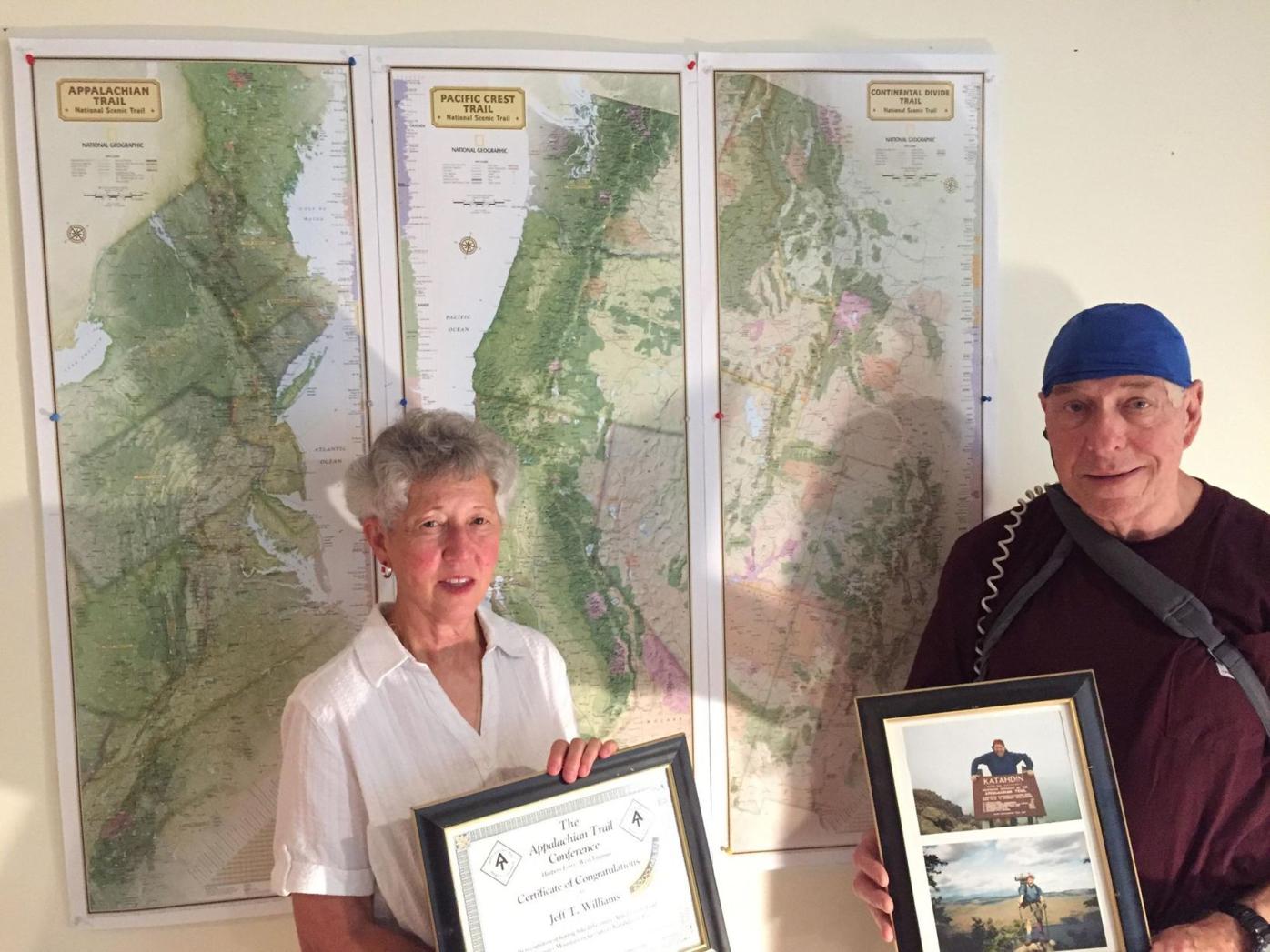 Jeff Williams (right) and his wife, Gay Lynn, hold up a photos of Williams on Mt. Katahdin and his certificate for completing the Appalachian Trail.

Boone hiker Jeff Williams shows off his solar-powered hat beside a photo of himself on a trail. His hat, which he wears to keep his head cool on walks when he wears his Optune treatment cap, features a built in fan.

Jeff Williams (right) and his wife, Gay Lynn, hold up a photos of Williams on Mt. Katahdin and his certificate for completing the Appalachian Trail.

From the high, wide vistas of the Sierra Nevada mountain range to the craggy, ancient peaks of the Appalachians, High Country hiker Jeff Williams has trudged through some of the nation’s most scenic landscapes. Known on the trail as “Boone Trekker,” Williams was on his way to completing his Triple Crown in hiking before a cancer diagnosis sent him on a detour. The avid outdoorsman, however, chose not to let his health hinder his passion for section hiking, opting instead to walk the remaining miles needed for his Triple Crown via a virtual trek.

To obtain a Triple Crown in hiking, one must complete in their entirety the big-three of America’s national scenic trails, The Appalachian Trail, Pacific Crest Trail and Continental Divide Trail. Williams, who worked for 32 years at Appalachian State’s Department of Technology, got into hiking in the late ‘80s, after a stint working with the Boy Scouts. Soon after, the Boone resident started hiking the famed Appalachian Trail, a 2,000-mile foot path that winds its way through the Appalachian mountains from Georgia to Maine. A section hiker, Williams spent about two weeks out of the years whittling down the miles of the trail until he had completed every section, a task which took him about eight years to finish.

“I started pecking away hiking the A.T. without the intention of finishing it. I would do a segment at a time because I was working, so if I could I would walk a week, maybe two weeks a year, ” said Williams.

Still starved for hiking after completing the Appalachian Trail in 2002, Williams set his sights on a new trail, this time on the west coast.

“I was talking to a friend and this guy said, what are you going to do next? And I said it was obvious, I was going to do the P.C.T, the Pacific Crest Trail,” Williams said.

The western counterpart to the Appalachian Trail, the Pacific Crest Trail stretches from the town of Campo on the Mexican border to Manning Park on the border with Canada. Similar to his A.T. hike, Williams completed the P.C.T in segments, knocking out sections of the trail in two-week and three-week intervals each year.

After that, Williams, now 70, had one more trail to navigate in order to receive his triple crown in hiking, The Continental Divide Trail, which he began in 2018. The “Boone Trekker” had hiked more than 800 miles of the C.T.D before his health, unfortunately, began to take an unexpected turn.

“I started getting this weird feeling, almost like a paranoia. Like something was going on that I couldn’t explain, so I got down to the nearest town, got off the trail and came home,” said Williams.

Williams was eventually diagnosed with glioblastoma, an aggressive type of cancer which can occur in the brain or spinal cord. Though his diagnosis took him off the trail, Williams didn’t give up on his hiking dreams.

“I have some friends that are hikers, and you get a Triple Crown if you complete all three trails. So, I told them that I wanted to get a virtual triple crown,” stated Williams.

Walking around their neighborhoods, Williams with the help of his hiking buddies Bob Webb and John Newell, tallied up their miles each week. They then added the miles to a virtual database they created and calculated where they would be on the Continental Divide Trail if they had been walking on site. Together, they have accumulated the mileage needed to finish the C.D.T.

Williams, who now wears an Optune treatment device, a mesh cap which transmits electrical waves intended to keep cancer cells from splitting, still tries to squeeze in time for walks. Sometimes walking between five and seven miles a day, if not more. Optimistic, Williams is hopeful to hit the trails again someday and continues to rack up miles on the Boone Greenway near his home.

That's awesome, Jeff! Keep on trekking. Jamie Goodman (from ITS back in the day)