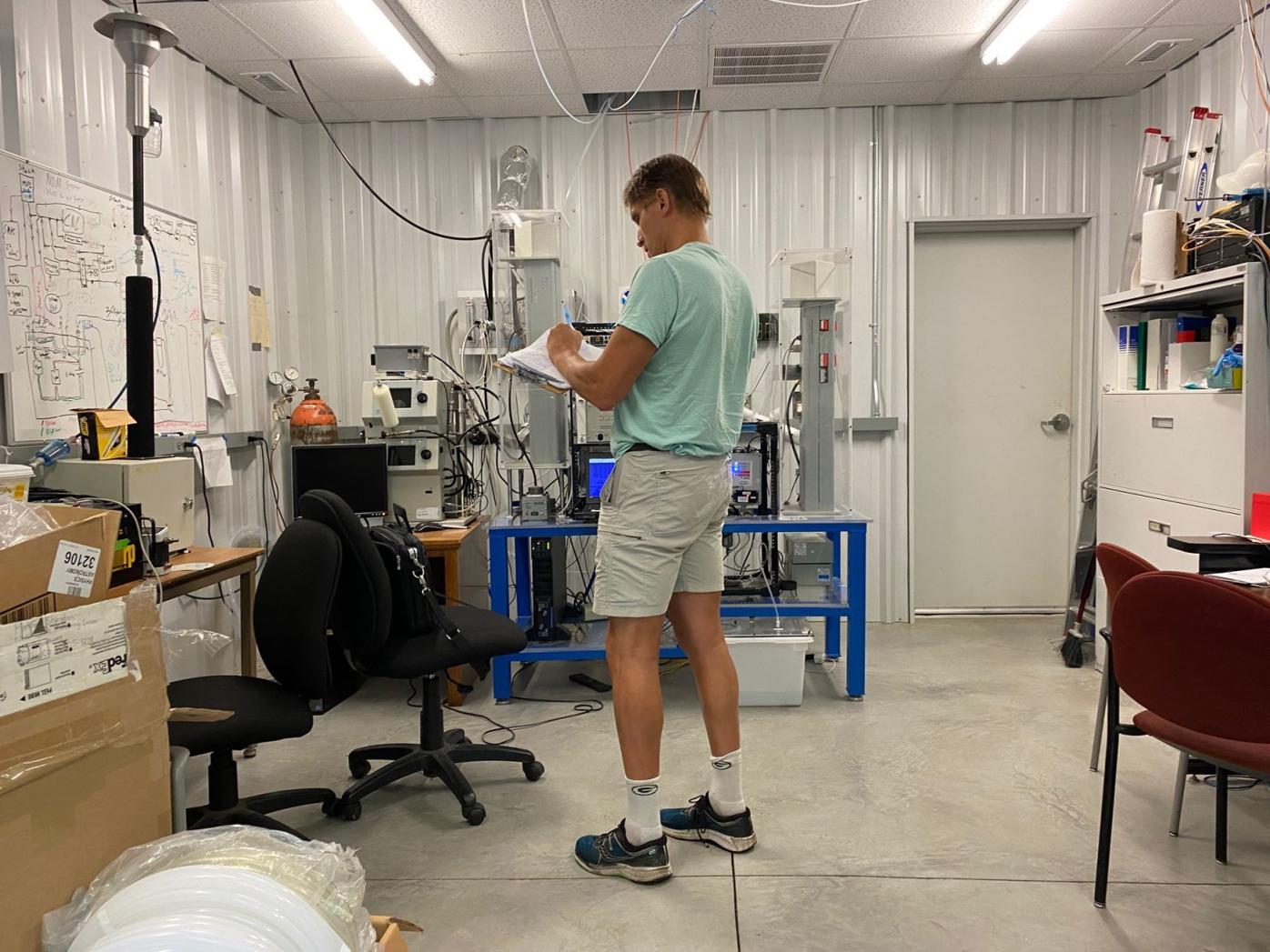 Jim Sherman writes down data from the equipment in the AppalAIR research facility. Sherman works with a small team of researchers and professors at App State to run the facility which collects data in conjunction with NOAA and NASA. 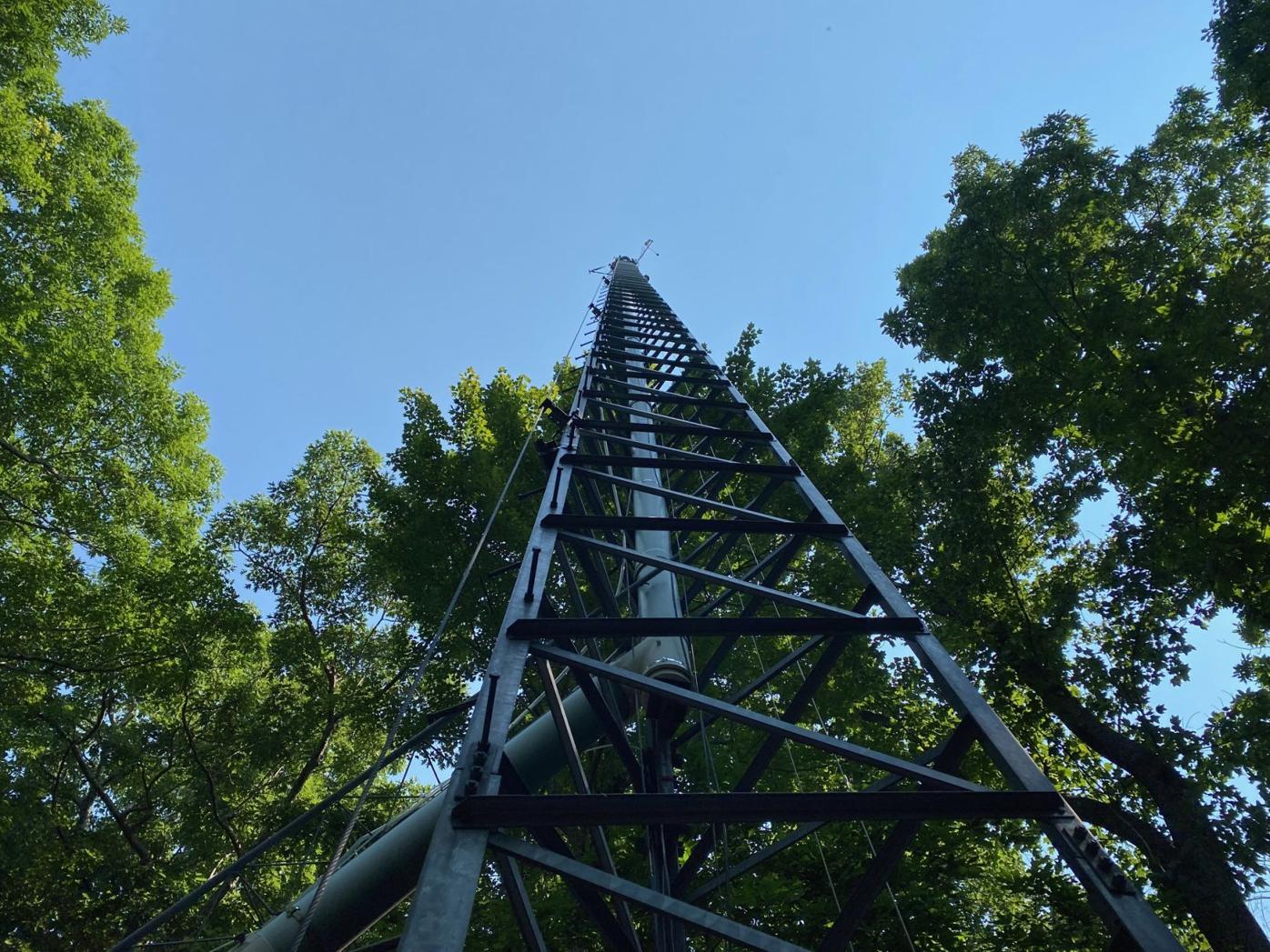 This tower outside the AppalAIR facility near Kidd Brewer Stadium collects air particle data at a variety of altitudes.

Jim Sherman writes down data from the equipment in the AppalAIR research facility. Sherman works with a small team of researchers and professors at App State to run the facility which collects data in conjunction with NOAA and NASA.

This tower outside the AppalAIR facility near Kidd Brewer Stadium collects air particle data at a variety of altitudes.

HIGH COUNTRY — Residents of the High Country may have noticed a haze blurring the summer skies of the region recently. All over the East Coast, smoke from wildfires in the West have swept across toward the East creating hazy days, redder sunsets and yet a smaller impact on air quality in the high country than one might expect.

James Sherman, a professor in the Department of Physics and Astronomy at Appalachian State University, has observed the phenomena of the smoke in the Appalachian Atmospheric Interdisciplinary Research Facility (AppalAIR), where he manages NOAA and NASA atmospheric monitoring sites.

“High enough smoke can travel large distances,” Sherman said. As of Friday, July 23, Sherman said his instruments were measuring smoke up to 4 to 5 kilometers above ground level in Boone, which is about 15,000 to 16,000 feet, or a little more than three miles.

Many areas in the East received smoke from out west, but according to NASA’s Earth Observatory data on July 21 indicated that many areas were receiving smoke hovering between land and 2 kilometers in altitude. In the Boone area, Sherman’s instruments indicated the smoke had drifted higher than in some regions NASA had observed.

Sherman said that the AppalAIR facility is special in that it is one of only two labs in the country with the NOAA and NASA network instruments. When it comes to observing the wildfire smoke, Sherman said “None of our instruments here are a smoking gun,” but that by analyzing the data from multiple instruments he and his team can do the “detective work” and form conclusions. However, because the phenomena is so widespread, Sherman said it was “pretty obvious” he was detecting the wildfire smoke due to national reports from the NOAA.

Data about particles in the air is collected through a variety of means at the AppalAIR facility. A tube funnels air from outside into a machine for analyzing, and outside the small building that houses the equipment stands a tower greater than 100 feet tall collecting data. Sherman said AppalAIR also uses lidar technology to collect data, which uses a laser pointed at the sky that reflects off particles in the air to determine distance and measure how high in altitude air pollution may be.

Even though residents of the High Country are witnessing the smoke in the sky, Sherman said the smoke does not have a large impact on breathing air quality given the high altitude it has remained at. Sherman said air quality in the region has improved over the last 20 to 25 years due to less power plant and coal emissions as well as more efficient vehicles, and the air quality alerts residents receive from the National Weather Service are only in regard to low altitude air quality, measurements of particles of pollution near ground level, and thus would not include the smoke blowing in from the West.

NOAA’s National Environmental Satellite Data and Information Service stated on July 15 that large wildfires in the American West, most notably Oregon’s Bootleg Fire which had burned at that time more than 212,377 acres, are creating the quantities of smoke wafting to the East Coast.

Many factors contribute to the smoke arriving in the High Country and creating hazy skies, according to Sherman. A combination of wind speed and direction, atmospheric pressure and weather had to coincide for the smoke to arrive in the mountains.

Stagnant air over the area, as well as a stint of time without rain, according to Sherman, created ideal conditions for observing and collecting data about the smoke.

“My best guess is that we’ll probably get episodes of smoke like this over the next few months,” Sherman said.

As the wildfires continue, wind and weather conditions may coincide again for the smoke to return to the High Country and cause similarly hazy skies.