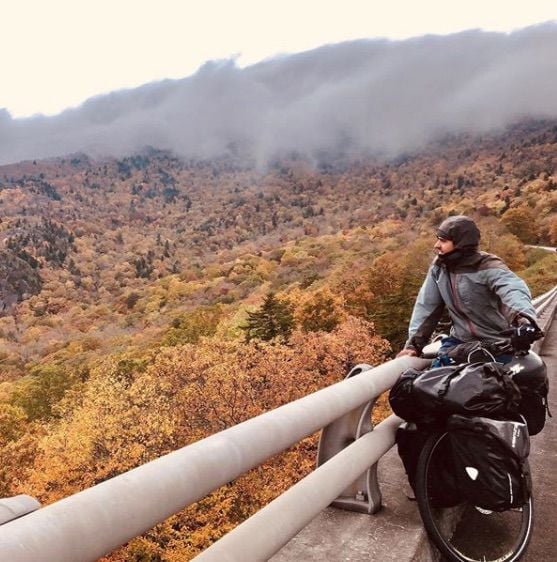 Guilherme Valadão stops for a moment to appreciate the view off of the Linn Cove Viaduct. 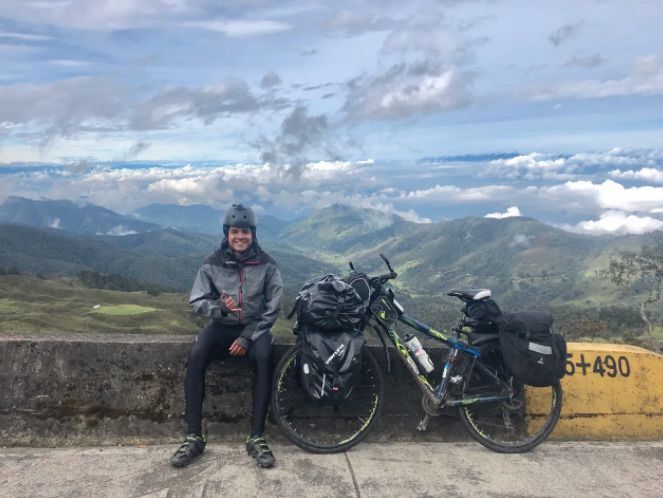 Guilherme Valadão poses in front of a view of the Páramo de Berlin, which is part of a mountain range that borders Columbia and Venezuela. 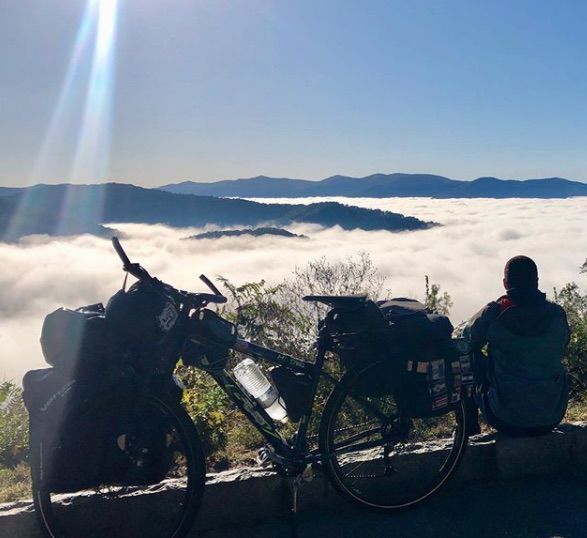 Guilherme Valadão takes a moment to take in the view off of the Blue Ridge Parkway.

Guilherme Valadão stops for a moment to appreciate the view off of the Linn Cove Viaduct.

Guilherme Valadão poses in front of a view of the Páramo de Berlin, which is part of a mountain range that borders Columbia and Venezuela.

Guilherme Valadão takes a moment to take in the view off of the Blue Ridge Parkway.

Quotations in this story are translated from Portuguese.

LINVILLE — As a deluge of vehicles flooded the Blue Ridge Parkway on the third weekend in October, leaf gazers may have witnessed another site if they happened to have been paying close attention, because during that weekend a cyclist named Guilherme Valadão crossed the Linn Cove Viaduct on the Parkway.

Normally, a cyclist crossing the viaduct in and of itself is not wholly unusual. Day trippers and those enjoying a weekend mountain getaway may see cyclists on the Parkway regularly. However, most of these cyclists tend to drive their cars to the Parkway, unload their bikes and set off down the scenic and curvy roads. Seldom does someone traverse the entire length of the Blue Ridge Parkway after riding their bike all the way from South America, which makes Valadão’s case all the more extraordinary.

In April of 2019, Valadão left his job working as an engineer in São Luis, Brazil, a city in the state of Maranhão in the Northeast region of the country, and has spent more than 18 months traveling via bicycle. To date, Valadão has traveled nearly 10,000 miles and criss-crossed between 12 different countries.

Similar to when the fictional character Forrest Gump (played by Tom Hanks) jogged across the famous curve on Grandfather Mountain, Valadão also set out on his adventure almost on a whim, wishing to find excitement in new experiences after his day-to-day life became too complacent.

“Well, I decided to leave my job. After a dissatisfied time with the day-to-day I was leading, enjoying (life) only on trips and weekends, and also making it clear to me that I was following a course with which I was not sure that I would like the answers to the questions that I had,” Valadão said. Such questions included, “If life really all about collecting money?” “Where would he be in the three, five or 10 years?” “Was he actually doing what he wanted to in life?” “And if money was not important, what else would he be doing?”

The answers for Valadão came as he set off on his bicycle. He said the challenges of such a mode of travel attracted him because of the minimalism that it required, the need for the ability to adapt and the need to be able to improvise at any moment. Valadão also goes by the moniker “Roteiro,” a word in Portuguese that means “route, script or guide.” The word attracted Valadão since he was finally leaving the beaten path.

“A more common route for those who go up to Central America from Brazil is to go through Bolivia, Peru, Ecuador, and Colombia, but I decided on a different path,” Valadão explained. “The idea of going through the Amazon attracted me from the beginning. I even had a (job) on a boat in the Amazon River in planning and voluntary work in the Colombian Amazon. This would allow me to visit a place that I always wanted to visit, but had never planned to visit until then, and which is so neglected as a destination by us Brazilians.”

Valadão set off with the destination of Central and North America as his goals, with Alaska being a potential final destination. However, due to the potential of arriving in Alaska during the winter, he changed plans, choosing instead to head east, and will eventually arrive in New York or Toronto where he has friends to rendezvous. At the time of this writing, Valadão is currently crossing Virginia.

“I want to go on a trip to Europe, Asia or Africa, for example. Honestly, I don’t know. I can wake up tomorrow too and decide I’m not going to go any farther. I want to continue and continue as long as I can,” Valadão said.

During his travels, Valadão has been welcomed into the homes and care of may individuals and families in both continents. Most nights he stays in a tent and utilizes the equipment he travels with that is slung around the compartments of his bike. Those who hear about his journey often reach out to offer him support, which comes with the usual, excited questions.

“The bicycle, as is clear to me now, is a magical tool. A traveler who arrives at a location on a bicycle will always attract people’s attention: Where does he come from? On a bike? Where are you going? How has it been? Is it dangerous? How do you eat, sleep, etc.,” Valadão said.

Once Valadão reached the northern end of Mexico, he flew into Houston. After a quick trip by car to California, he returned to Texas and resumed his journey east. Valadão eventually ended up in Asheville, where he decided to depart on the Blue Ridge Parkway. As fate would have it, he arrived in the mountains of North Carolina just as the fall color season began to arrive.

During the first week on the Parkway, Valadão peddled upwards from an elevation of 1,960 feet to more than 6,500 feet, eventually reaching the peak of Mount Mitchell only to find that the campsites were closed due to heightened bear activity. Despite having to face an arduous descent in the cold and at night, he found a place to camp where he was welcomed by an evening sunset and sensational views the next morning.

“If there was no one else hiding out up there, on top of the mountain (that night), it was only me and the bears, who had compassion and didn’t bother me,” Valadão wrote.

On either the morning of Friday, Oct 17, or Saturday, Oct. 18, Valadão crossed into Avery County where he passed by the scenic overlook of the expansive Linn Cove Viaduct. While Valadão has surely seen much natural beauty along his travels, he stopped for a moment to appreciate the sensational view before eventually completing the rest of the Parkway.

“When I was heading in this direction, (people) were warning me, ‘Get ready for the mountains! It will be extra difficult with all that weight.’ But I went with tranquility, on my rhythm, enjoying the moment. Those who are fearful for me forget that when I’m out here, I’m the boss. If I wanted to turn around and do it all over again, (I could). In what is really important — time — I am a millionaire,” Valadão said.