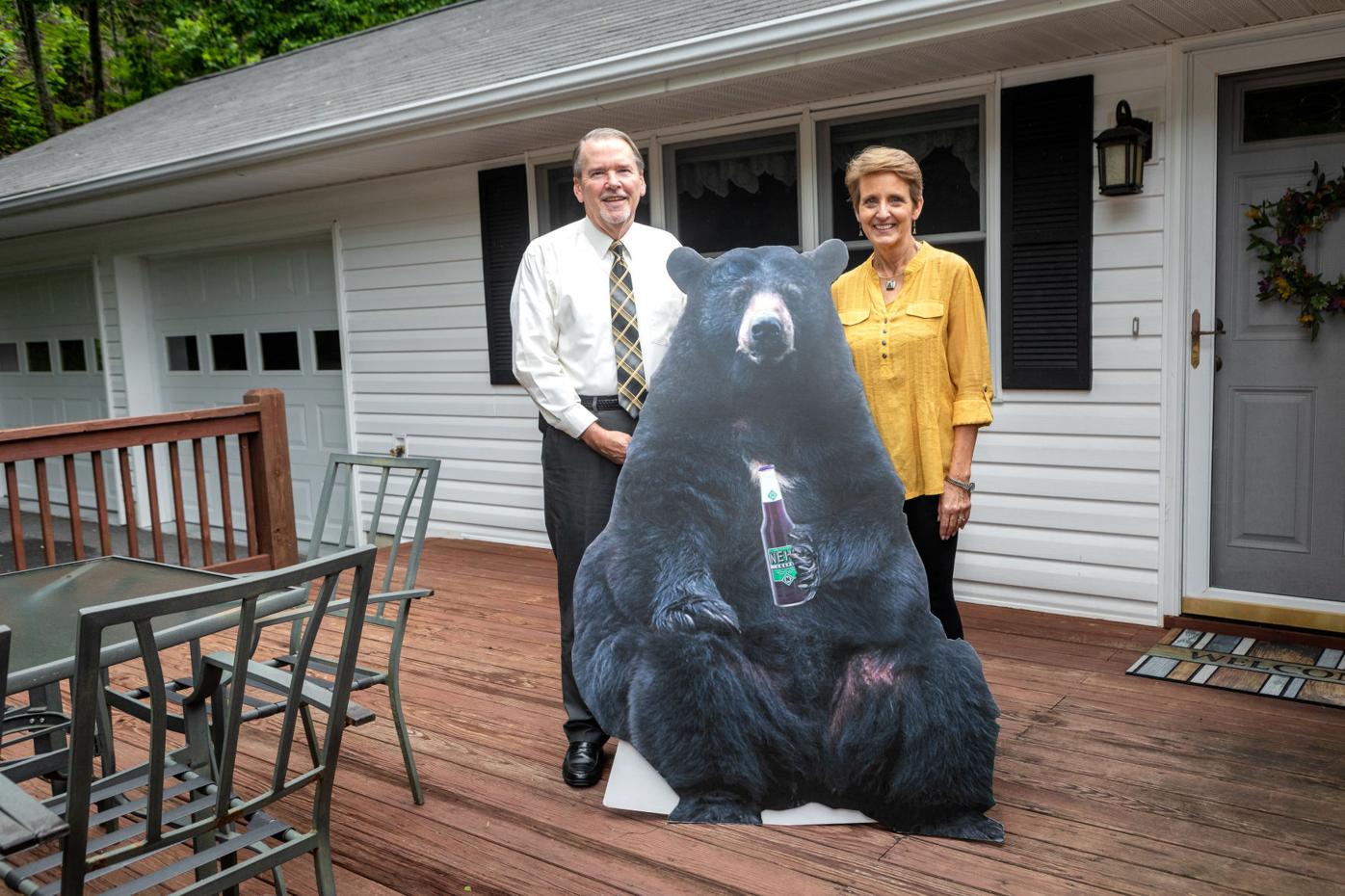 Randy Edwards and his wife, Margaret Edwards, stand with a gift from Appalachian State University acknowledging his earliest career in the High Country — that of ‘bearkeeper’ for Mildred the Bear, the longtime mascot of Grandfather Mountain, where Edwards worked while a student at Appalachian. The photo of Mildred used for the poster was taken by the late Hugh Morton. The image was digitally enhanced with the addition of a soda bottle. Grape soda was said to be one of Mildred’s favorite drinks and a successful method of Edward’s to coax her from her den for public appearances. 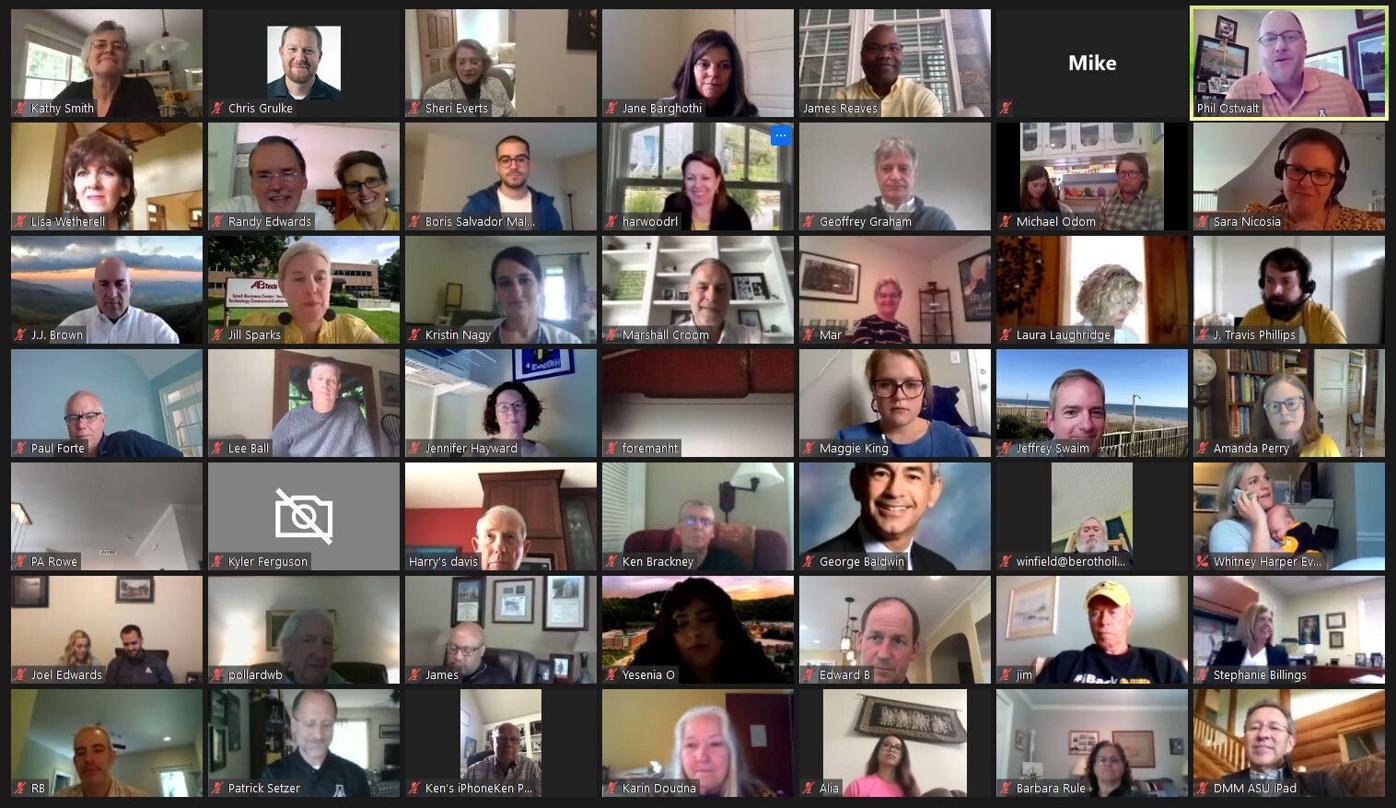 More than 100 people attended a virtual send-off for Randy Edwards June 18, honoring his 37 years of service to the university. 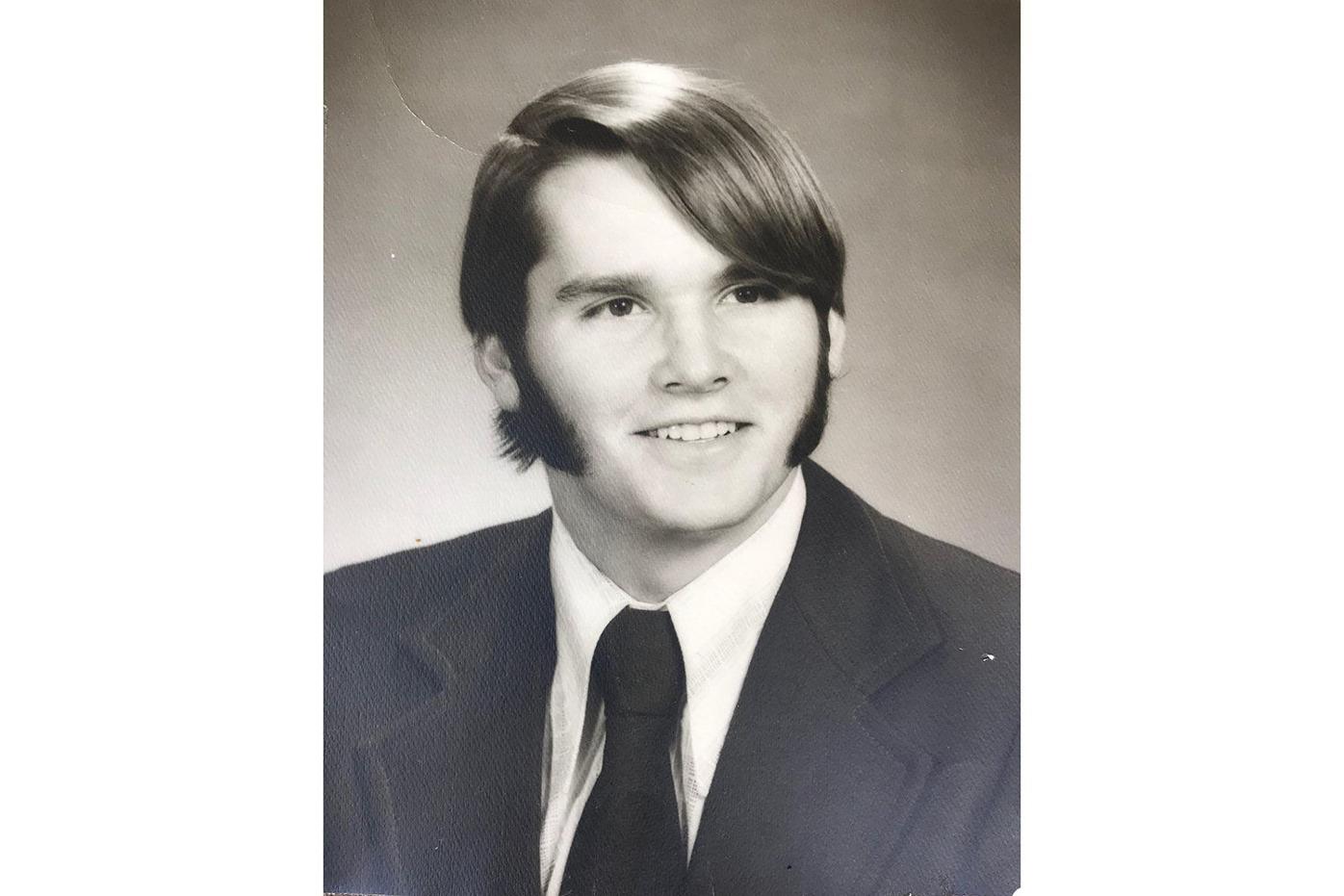 Randy Edwards as a young faculty member in the Walker College of Business in the early 1980s. 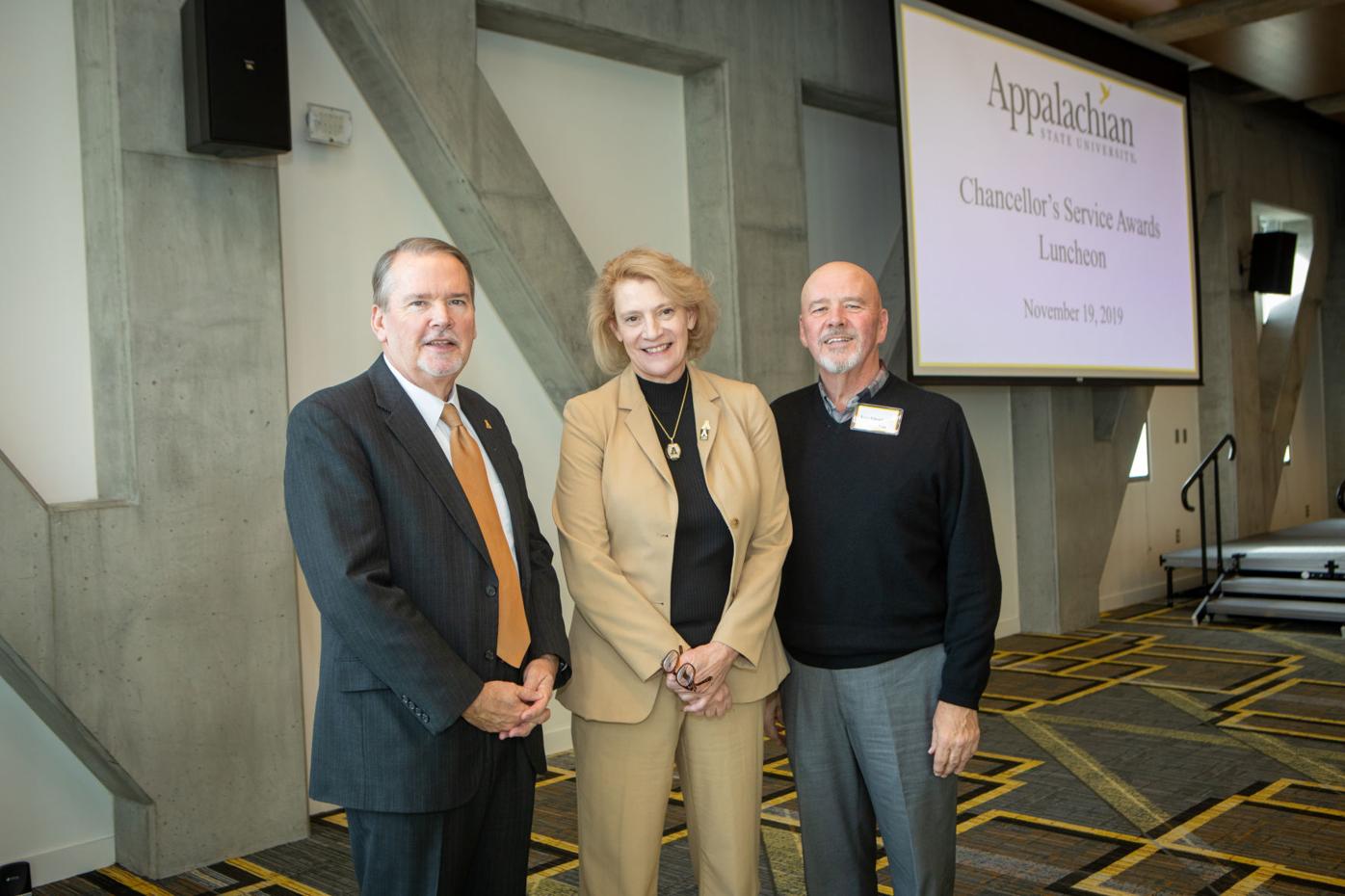 Randy Edwards, left, and his brother, Terry Edwards, a retired staff member of Appalachian’s Office of Internal Audits, far right, with Chancellor Sheri Everts at the Chancellor’s Service Awards Luncheon held fall 2019. The event honors staff members for significant years of service. Between them, the brothers have 72 combined years of service to the university. 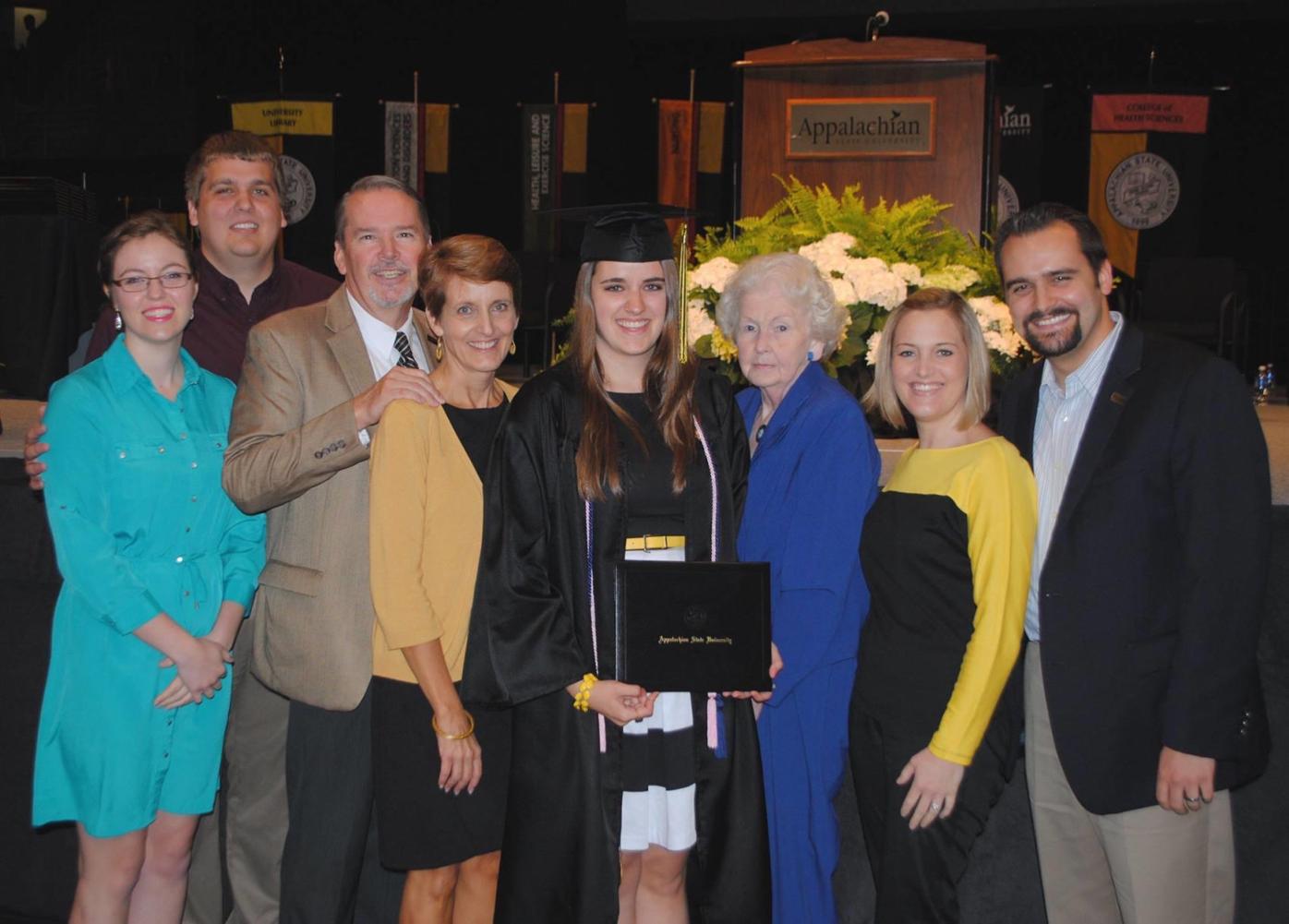 Randy and Margaret Edwards, third and fourth from left, respectively, at the graduation of their youngest daughter, Ruthanne, from Appalachian State University in May 2014. Pictured with them are their two sons, along with their wives, and Randy Edwards’ mother. The Edwardses have four children and six grandchildren, with seven immediate family members having earned Appalachian degrees. 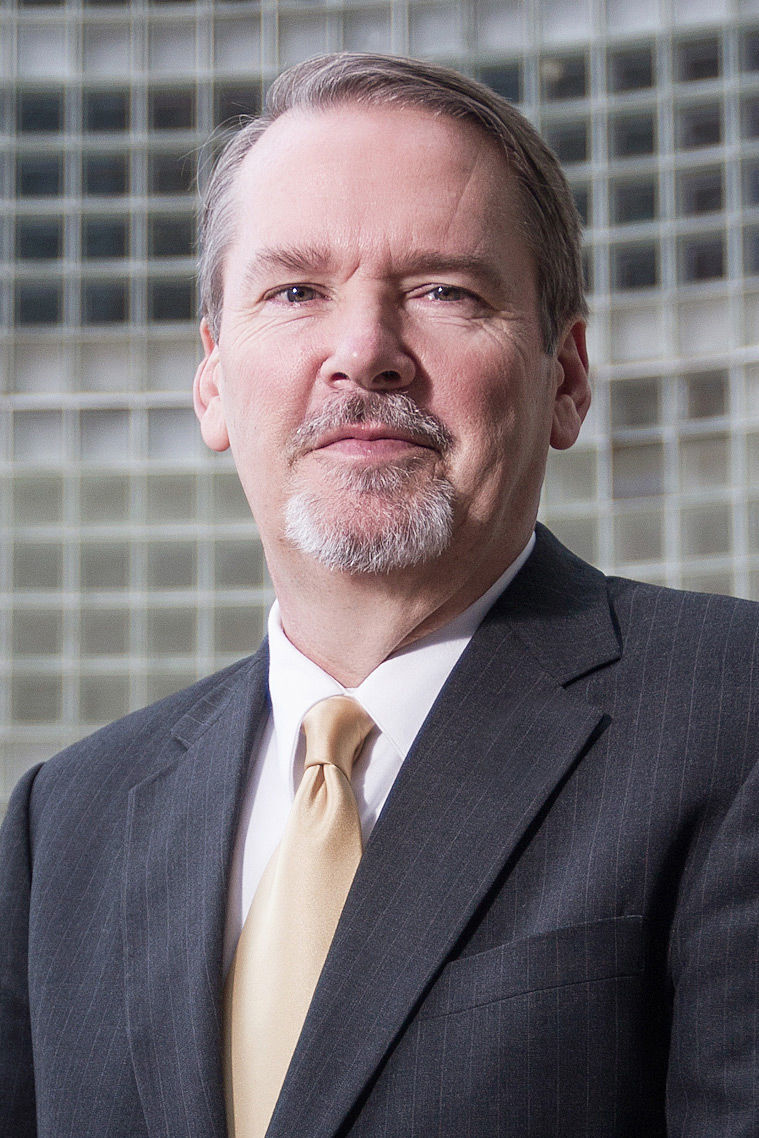 Randy Edwards is pictured in front of Peacock Hall while dean of the Walker College of Business.

BOONE — More than 100 people and a likeness of the late Mildred the Bear recently gathered for a virtual send-off of one of Appalachian State University’s longest-serving leaders. Randy Edwards is retiring after 37 years of service.

Former students, colleagues and friends spoke of their gratitude and respect for the man they said has been a generous and caring leader, mentor and faculty member — and who, throughout his career, has maintained a deep passion for supporting students.

“Randy has touched many lives in his decades at Appalachian,” Chancellor Sheri Everts said during the event. “As I have worked with and learned about Randy, personally and professionally, over the last six years, I have been repeatedly inspired by his deep, unwavering belief in the mission of Appalachian. He has used that drive to elevate our university at every turn.”

She continued, “To so many, including me, his balanced leadership style, broad institutional knowledge and business acumen make him a highly effective colleague. His compassion, generosity and pragmatism make him a valued friend.”

The Appalachian Alumni and University Advancement websites hosted a live tagboard — an online platform that aggregates and displays comments on a certain topic — on which dozens of friends, colleagues and former students added kind messages.

Gifts and a catered meal from Appalachian’s Campus Dining were brought to the front door of his home, where Edwards and his wife, Margaret Edwards, engaged with well-wishers through videoconferencing — with lots of laughter, smiles and a few happy tears.

Among the gifts was a poster of Mildred the Bear, the longtime mascot of Grandfather Mountain, holding a bottle of soda. The gift acknowledged Randy Edwards’ earliest career in the High Country — that of “bearkeeper” at Grandfather Mountain, where Edwards worked while a student at Appalachian.

The photo of Mildred used for the poster was taken by the late Hugh Morton and digitally enhanced with the addition of a soda bottle. Grape soda was said to be one of Mildred’s favorite drinks and a successful method of Edwards’ to coax her from her den for public appearances.

A first-generation college student who earned two accounting degrees from Appalachian — a bachelor’s in 1977 and a master’s in 1978 — Edwards has served in a number of leadership roles. He joined the Department of Accounting faculty in 1981 and served as the department’s chair for 13 years before serving as dean of the Walker College of Business for nine years. He later served as vice chancellor and chief of staff and served as interim vice chancellor and vice chancellor for university advancement since 2016.

“He certainly has a heart and concern for our students and their success. That will be his legacy,” said Heather Hulbert Norris, interim provost and executive vice chancellor. A finance professor, she was part of Edwards’ leadership team in the WCOB — first as assistant dean and later as senior associate dean and interim dean.

Recent graduates spoke of the support, friendship and sense of family Edwards created within the WCOB.

Whitney Evans told the virtual crowd how Edwards and his wife attended her wedding and baby shower. “I loved being a Walker Fellow because I was so proud of the Walker College of Business and the staff and faculty I got to know personally, as well as the professional activities that prepared me well for my career and life,” she said.

“You took me under your wing … you were there for the highs and lows … you helped an 18-year-old boy go from where he was to having a career and being able to provide for a family,” said Boris Salvador Maldonado, of Greenville, S.C., a first-generation college student and scholarship recipient while at Appalachian. “That’s a really beautiful thing to be known for. Thank you.”

“I can’t even count the number of Appalachian alumni I work with now, who all now have successful careers that in some way stem from something amazing you did,” said Yesenia Olguin, of Charlotte. “Thank you for the passion and the great support you offered our school and our amazing college.”

As leader of the Division of University Advancement, Edwards was instrumental in securing $4 million in scholarship support through the Appalachian State University Foundation Inc. in the 2019–20 academic year and facilitating growth of the university’s endowment fund from $68 million to $95 million in four years, shared Geoff Graham, assistant vice chancellor of gift planning and real estate management.

“We thank him for the positive impact he’s had on our university,” Graham said at the event.

The Council for Advancement and Support of Education, an international professional organization, recently selected Appalachian for a 2020 CASE Educational Fundraising Award for Overall Performance for demonstrating the highest levels of professionalism and best practice in fundraising.

Michael Steinback, whose children attended Appalachian and who served on numerous Appalachian boards and committees, praised Edwards for his “soft-spoken, wise temperament.” Former scholarship recipient Brandy Handley, now an assistant professor in the WCOB’s Department of Finance, Banking and Insurance, thanked Edwards for his “selfless service” in supporting the life and career aspirations of her and other students.

Former students James K. Reaves, Scott Lampe and Phil Ostwalt spoke of his familial nature and attention to their learning and personal development. Reaves and Lampe both serve on Appalachian’s Board of Trustees, and Ostwalt serves on the Appalachian State University Foundation Board of Directors.

Richard Sparks, retired president of Watauga Medical Center Inc. who serves on the WCOB Advisory Council, said following the 2008 recession, when employment opportunities for recent graduates dipped, Edwards “became passionate that we were responsible for helping students find their path” and raised additional funds for the WCOB to support career development for students and alumni.

Edwards will stay on at Appalachian as part-time senior director of development.