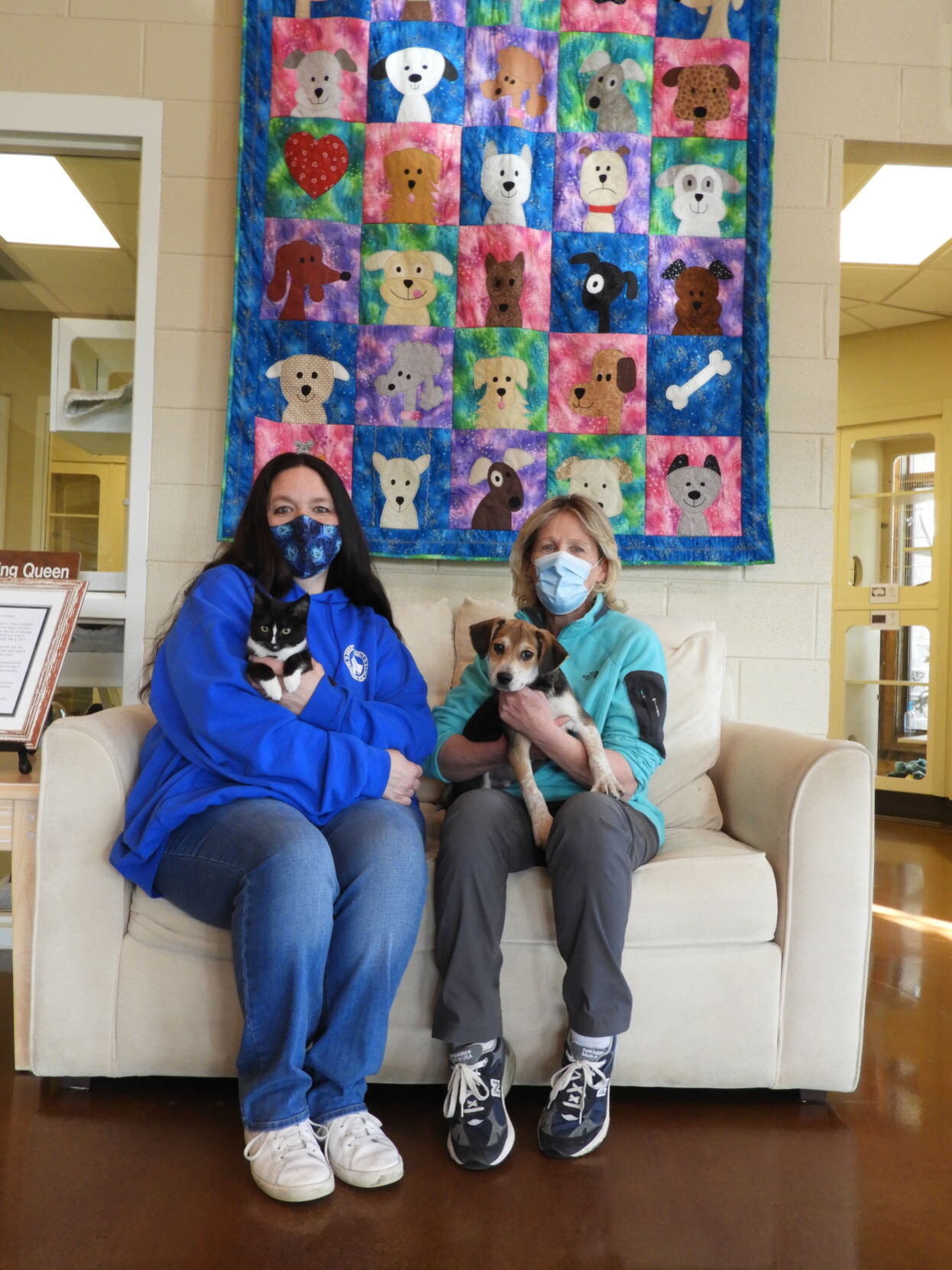 Avery County Humane Society received a grant in the amount of $300,000, courtesy of the Mooradian estate. Pictured from left are Shelter Manager Charlene Calhoun and Executive Director Gwynne Dyer posing with two furry photogenic companions who are up for adoption. 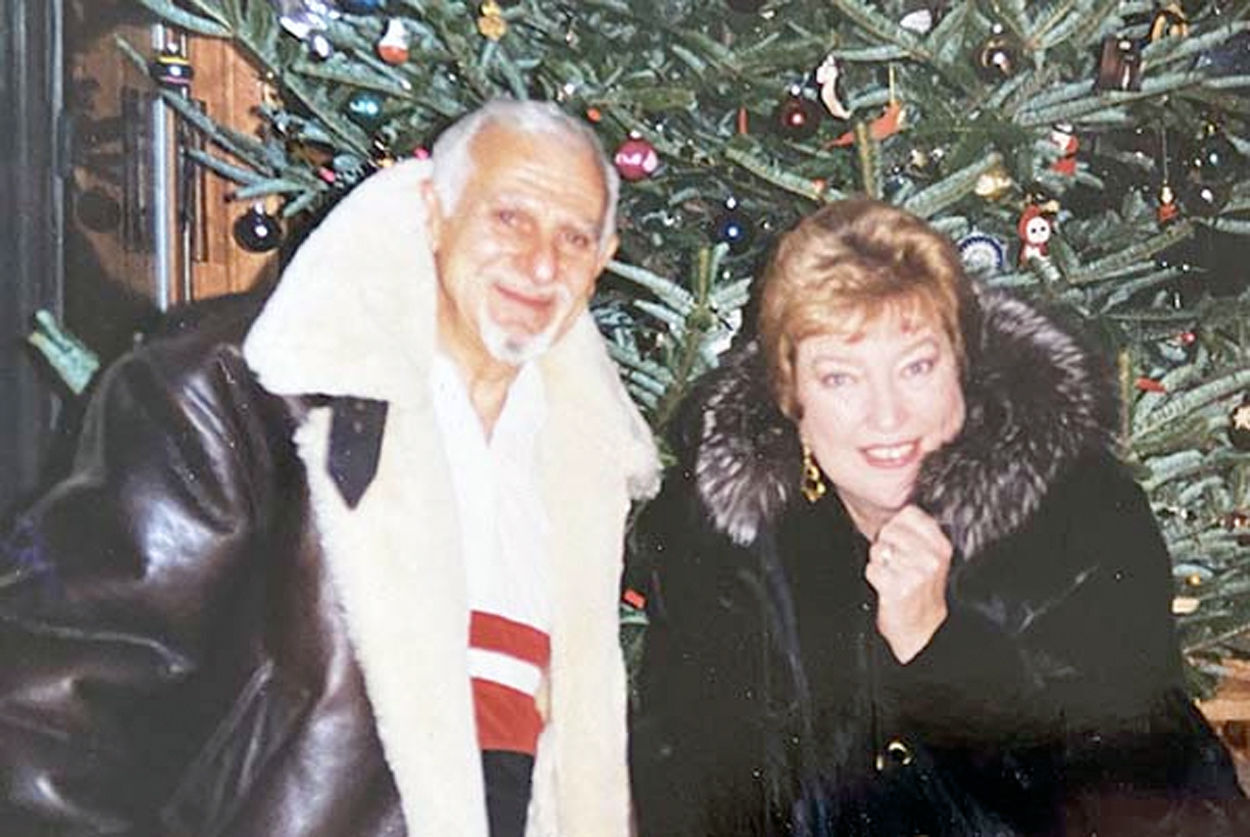 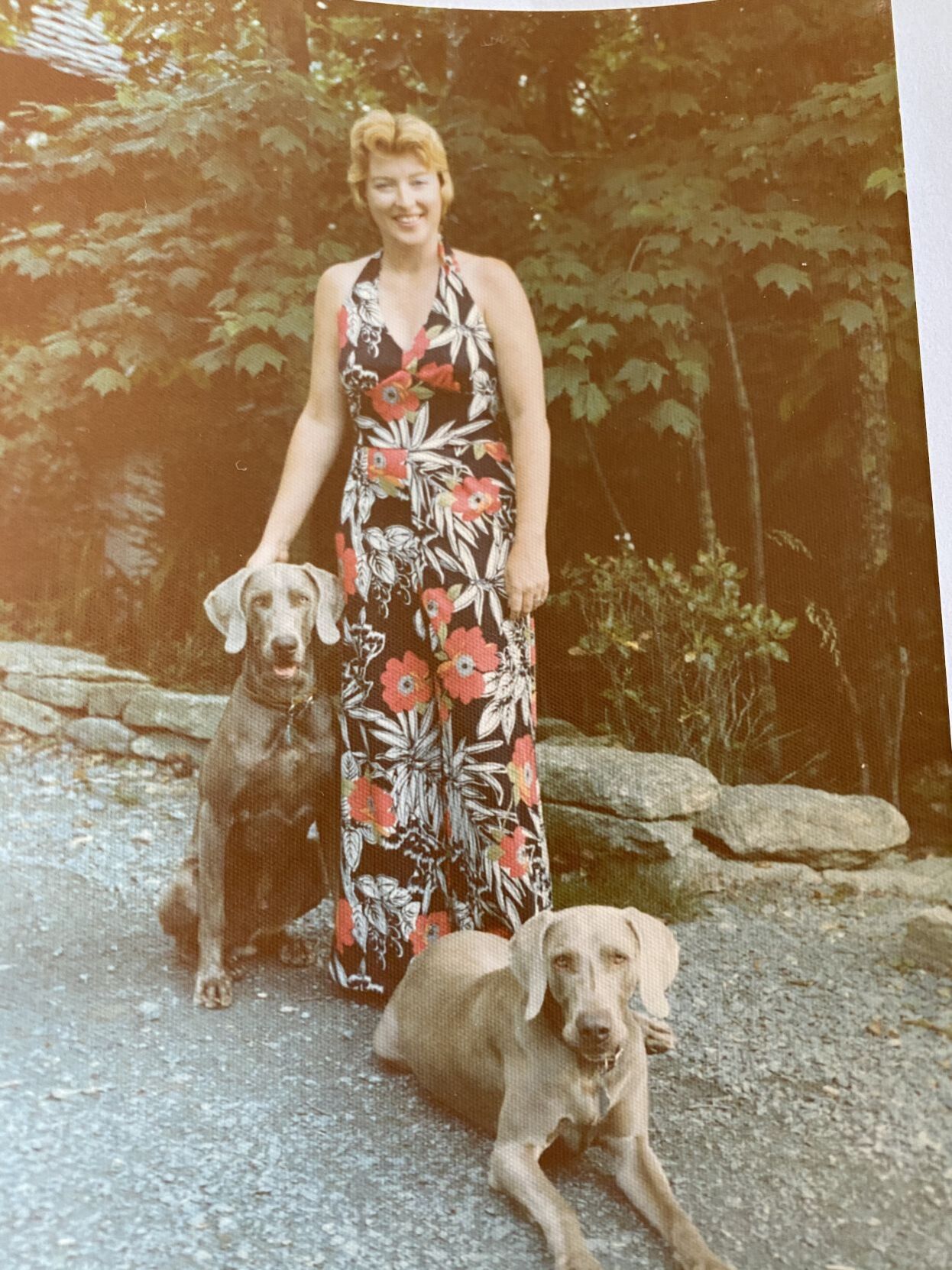 Barbara Mooradian pictured with two of her beloved Weimaraner dogs.

Avery County Humane Society received a grant in the amount of $300,000, courtesy of the Mooradian estate. Pictured from left are Shelter Manager Charlene Calhoun and Executive Director Gwynne Dyer posing with two furry photogenic companions who are up for adoption.

Barbara Mooradian pictured with two of her beloved Weimaraner dogs.

The checks were presented to the three organizations during the Town of Beech Mountain monthly council meeting, in which attorney Anthony di Santi presented the checks to each institution as a representative of the Mooradian estate. de Santi said he had first met donors Barbara and Reuben Mooradian when he began practicing law in Boone 46 years ago.

Barbara was one of the first clerks for the Town of Beech Mountain and a prominent local artist, while Reuben was fire chief at the Beech Mountain Volunteer Fire Department from 1974 to 1995 as a State-Certified Firefighter II and a hazardous materials certified responder. Reuben also served as a town council member for more than 10 years and served as the first Mayor Pro Tempore.

Di Santi and Reuben made their acquaintance years ago after both of them retired in the area from military service. In di Santi’s case, he had retired from the military after being wounded in Vietnam in the early 1970s.

Reuben and Barbara settled in Beech Mountain in 1969 after their retirement, along with the likes of General William Westmoreland and General John Tolson, both of whom led the war effort in Vietnam and retired in the Beech Mountain community, according to di Santi.

Reuben received his college education from the University of Missouri and enlisted in the Army in 1952. He served in the 8240th Unit, United Nations Partisan Forces in Korea and served two tours of duty in Vietnam before retiring as a Lt. Colonel in the Special Forces in 1971. After retirement, Reuben went on to earn his Master’s in Business Administration. His education gave him the foundation to help lay the groundwork for the BMVFD as one of its founding members.

Reuben and Barbara first met in Paris while Reuben was working in Germany. He was transferred to Vietnam and Barbara moved to Thailand where they married. Reuben Mooradian was born in North Attleboro, Mass., while Barbara was a native of Miami, Fla.

Di Santi said he had met with Barbara about a year prior to her death. Reuben had predeceased Barbara, and she wanted to make sure what they left behind was handled properly. Barbara had initially left everything she owned to her husband.

“She wanted to do a new will. I met with her, and she was very adamant that she wanted her estate to go to the Beech Mountain Fire Department, the police department and the Avery County Humane Society,” Santi said.

Beech Mountain Mayor Barry Kaufman expressed his gratitude for the couple’s generosity, while Town Manager Bob Pudney, who also serves as the fire chief for the BMVFD, said that Reuben had a substantial impact on the department that can be felt even today.

Executive Director of the ACHS Gwynne Dyer said the money that was left behind by the couple will go toward advancing the mission of the animal shelter.

“This bequest will have a significant impact on our ability to care for vulnerable animals in our community,” Dyer said. “The Mooradians understood the joy animals bring into the lives of individuals and families, and they wanted to ensure that animals in need could receive the food, shelter, medical care and love they need until they are able to go home with a family. We are so thankful for their compassion for animals and for their generous gift.”

Dyer added that the Mooradians had a passion for animals, and always had one of more dogs in their care. One of their favorite breeds were Weimaraners.

At the end of her life, Barbara lived in her home with a beloved Goldendoodle named Sandy. Homebound and in failing health, each day members of the fire department would check on her.

“Animal companions make a huge difference in our lives and Sandy did that for Barbara,” Dyer said. “While she may have been isolated, she was not alone. Studies have shown that animals have a positive effect on physical and mental health, they offer emotional support and can reduce fear, especially for a person like Barbara, an elderly woman living alone.”

Dyer said the donation will go toward helping house, feed and care for more than 600 animals, provide low-cost or free spay and neuter services to the public, reach approximately 500 animals and spaying or neutering an additional 420 animals at the shelter. Additionally, the funds will help care for 350 stray animals, save the lives of at least 50 animals who are transferred from nearby shelters where they would be euthanized within days due to space limitations, and support the shelter’s partnership with Mountain View Correctional Institution through New Leash on Life, a 10-week program that engages eight inmates to train more than 20 dogs each year.

Longtime Beech Mountain resident Jim Brooks who is fire department board president, said the Mooradians were a big part of town, as they would participate in things that went on in the community and embodied the Beech Mountain spirit.