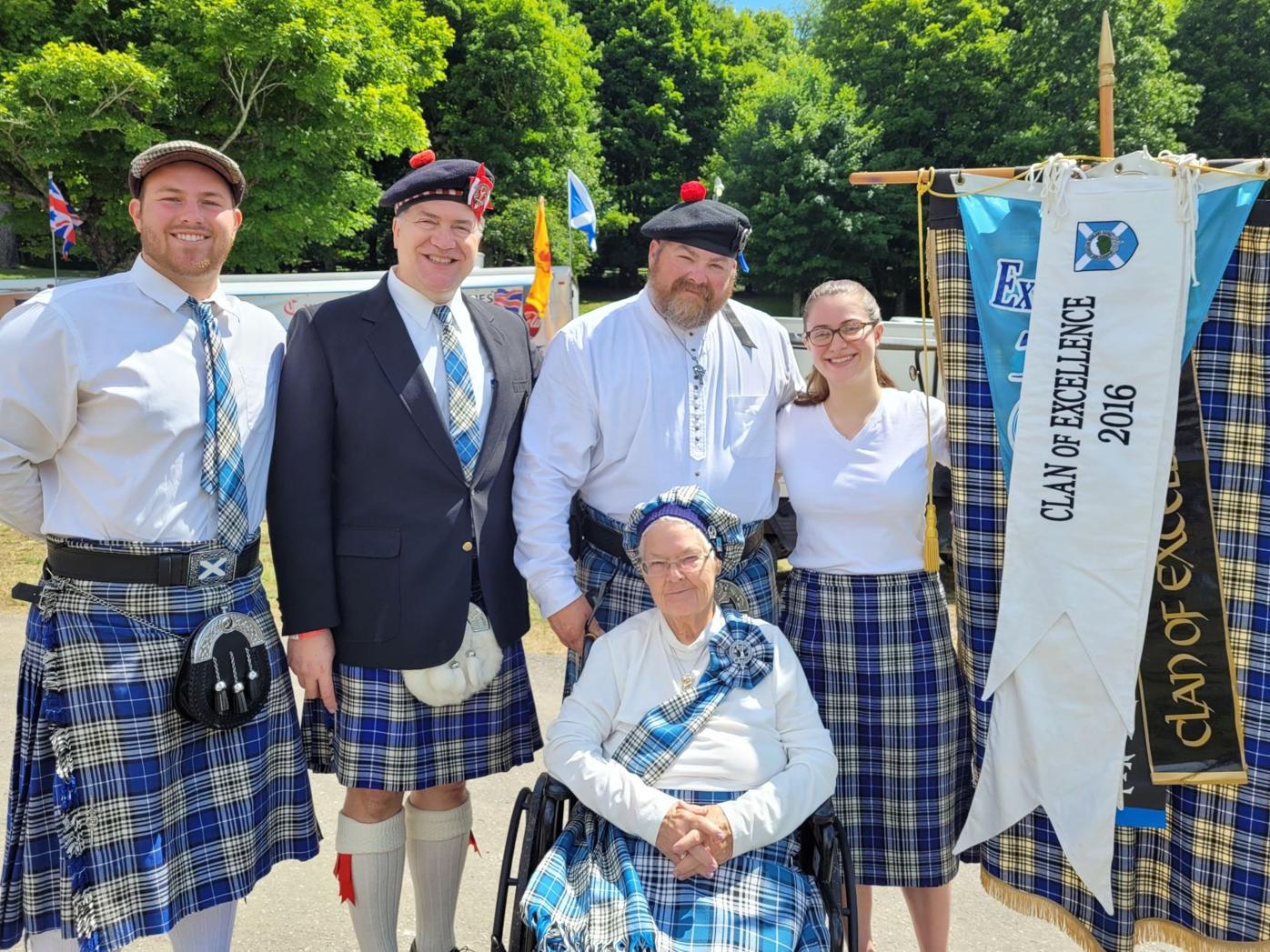 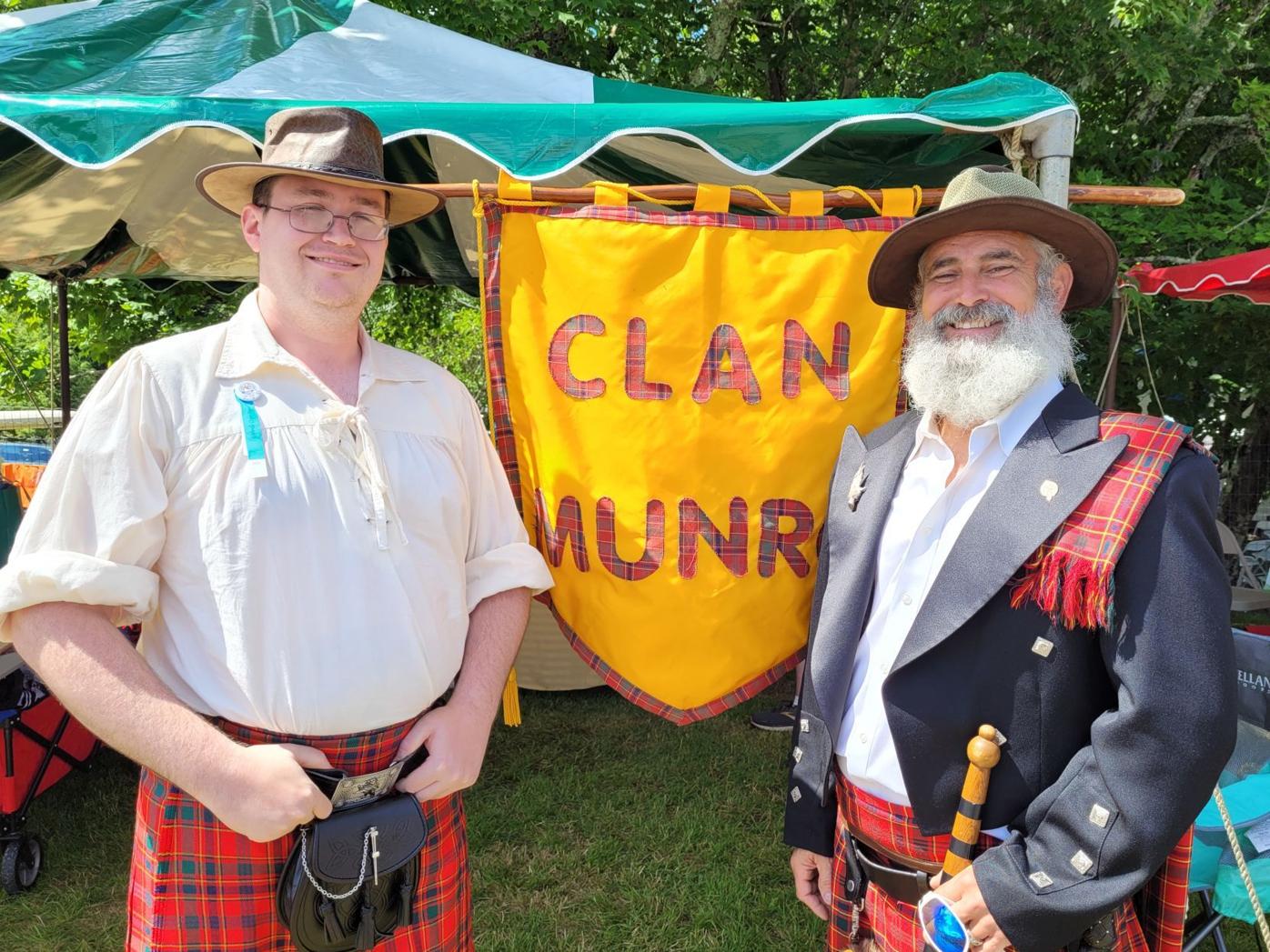 Pictured outside of the Clan Munro tent are Andy Alger and Mark Robert Munro.

Pictured outside of the Clan Munro tent are Andy Alger and Mark Robert Munro.

GRANDFATHER MOUNTAIN – For a multitude of Grandfather Mountain Highland Games enthusiasts, two years was simply too long of a wait in order to enjoy the annual gathering of Scottish clans and the festivities that go along with it.

The result of this pent-up desire was that the Games on July 8 to 11 were the most well-attended games in the event’s 65-year history, attracting approximately 40,000 to the fields of MacRae Meadows.

One of the many clans who reveled in the weekend’s festivities was Clan Munro, whose weekend representative Mark Robert Munro has been making the annual pilgrimage to Linville for the past 20 years.

“For me, it’s the family. Everybody on the mountain is a family member. People are people and we get along so well. The camaraderie, the food, seeing an old friend, hugs and high-fives, it’s better than Christmas,” Munro said. “I feel like the people that are here are here for the correct reasons, to be a part of the Games and to see old friends and give an old friend a hug, because we have missed out on handshakes and hugs for the last year and a half.”

A well-traveled veteran of Highland Games up and down the East Coast, Munro gave the GMHG the distinction of being like none other. As part of his weekend duties, Munro was also waxing poetic about the history of the Munros and the common heritage of this clan whose members stretch across the globe.

The Munros originated in Northern Ireland before moving to Tain, Scotland in 1066 in the Ross County area. Upon their immigration to the Americas, the Munros gathered predominantly in the Boston area and along the northern East Coast, although Nova Scotia was also a common landing spot, as well as places as far away as Brazil and Australia.

The clan’s claim to fame are its world-class whiskey brewers and malters. The clan’s chief is a master brewer and brews the rye for the Clan Ramsey Whiskey. In 2019, he was the No. 1 independent rye grower in all of Scotland.

“When we go to Scotland or go anywhere else, I feel like the Munro Clan is a little bit more joyful than most. We have a positive attitude, and we really try to make everyone feel welcome, especially if they don’t know where they belong. We try to help them find out,” Munro said.

While some Scottish societies have an extensive recorded history and tradition, others have only formed relatively recently, an opportunity that the GMHG helps provide. Clan Maxwell, for example, was founded at the GMHG in 1964 and its members have been attending the Games regularly for the past 57 years.

For 250 years, the Maxwells were the “power” in the West March, or the border between England and Scotland in the late medieval and early modern eras, which were marked by violence and cross border raids before the unification of the British and Scottish crowns in the 17th Century. The Maxwell Chiefs were wardens of the West March and founded castles in the area, of which many are still owned by Maxwells today.

The theme of family and reunification was common across the many clans and societies gathered over the weekend. However, there was also a felt sense of loss and longing for those who had passed on as a result of or during the pandemic.

On Thursday evening’s torchlight ceremony, homage was paid to those who will no longer make the yearly trek to Grandfather Mountain, and in one of the most touching moments of the weekend, GMHG President Steve Quillan and Director of Church Service Ellen Liston read the names all of the Highland Games participants who had passed away during the Games’ year-long hiatus.

The reading of names and prayer took place during the Order of Worship on Sunday and was referred to as Flowers of the Forest. For Pat Napier, who had lost her husband and father in the span of the past year, Flowers of the Forest was the most meaningful moment of the weekend for herself and the rest of her family and clan.

“It’s a breath of fresh air. It’s so nice to be back after being cooped up for a year and a half,” Napier Minor said.