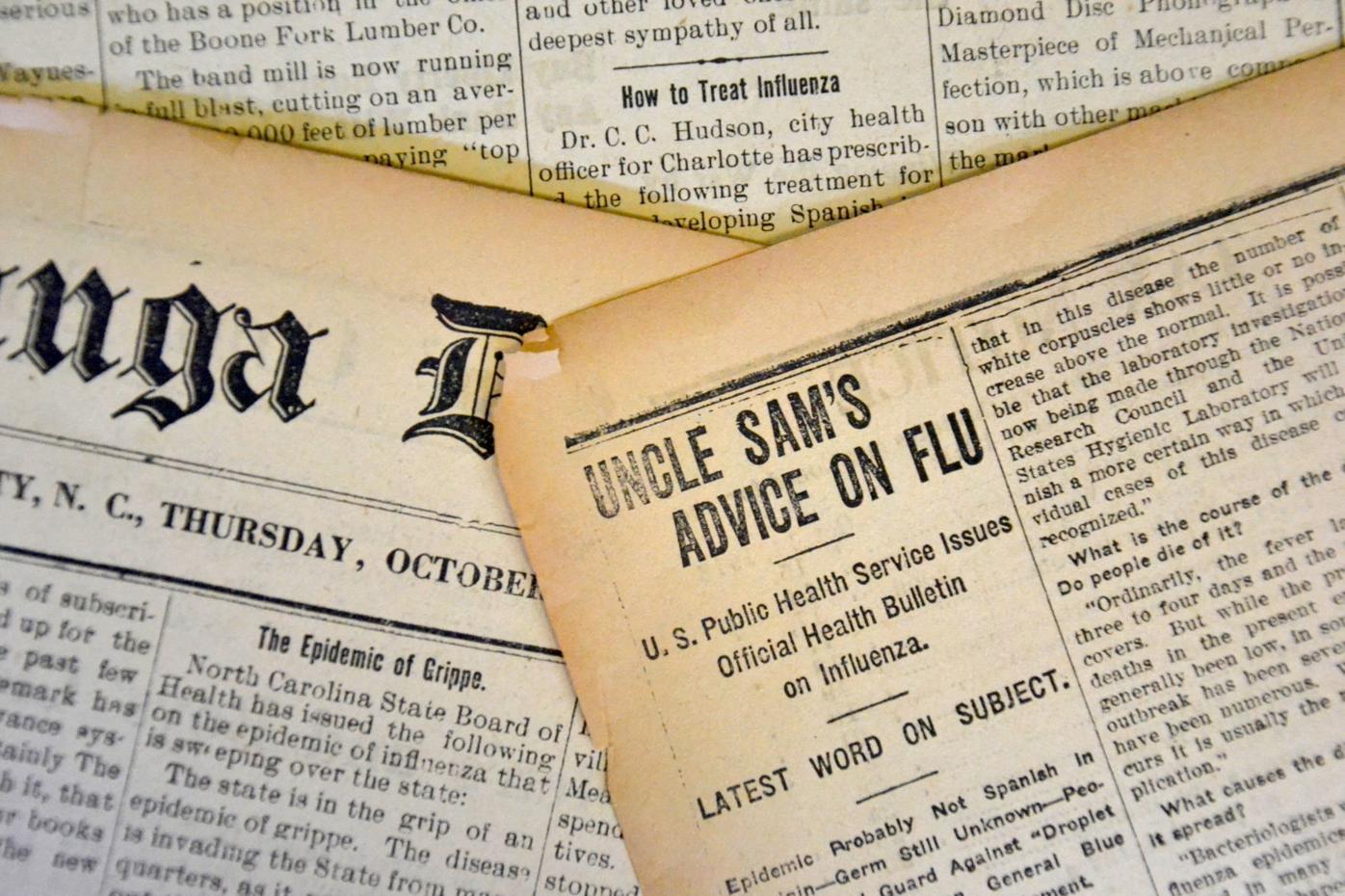 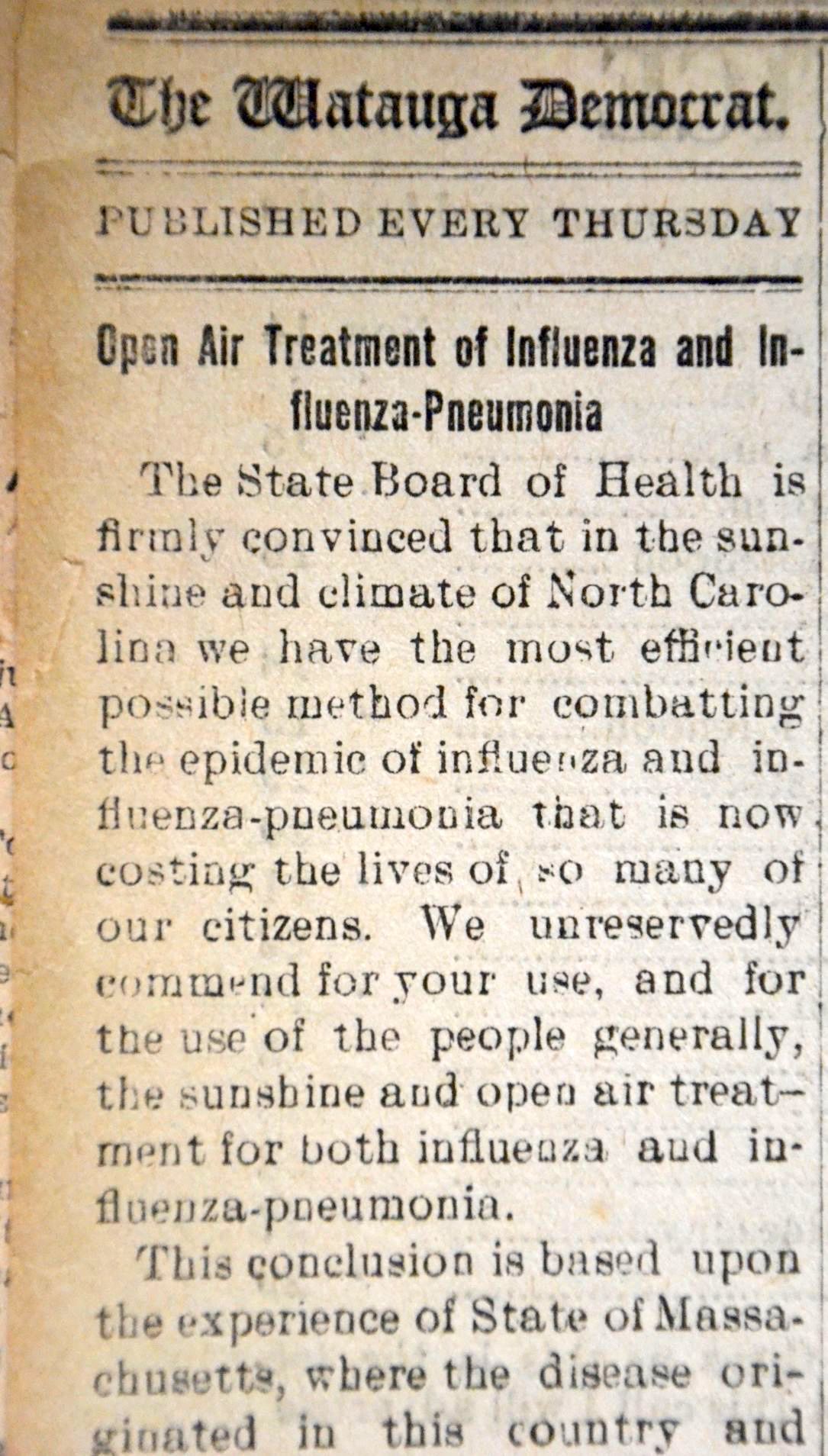 A late 1918 Watauga Democrat article talks about influenza and pneumonia. 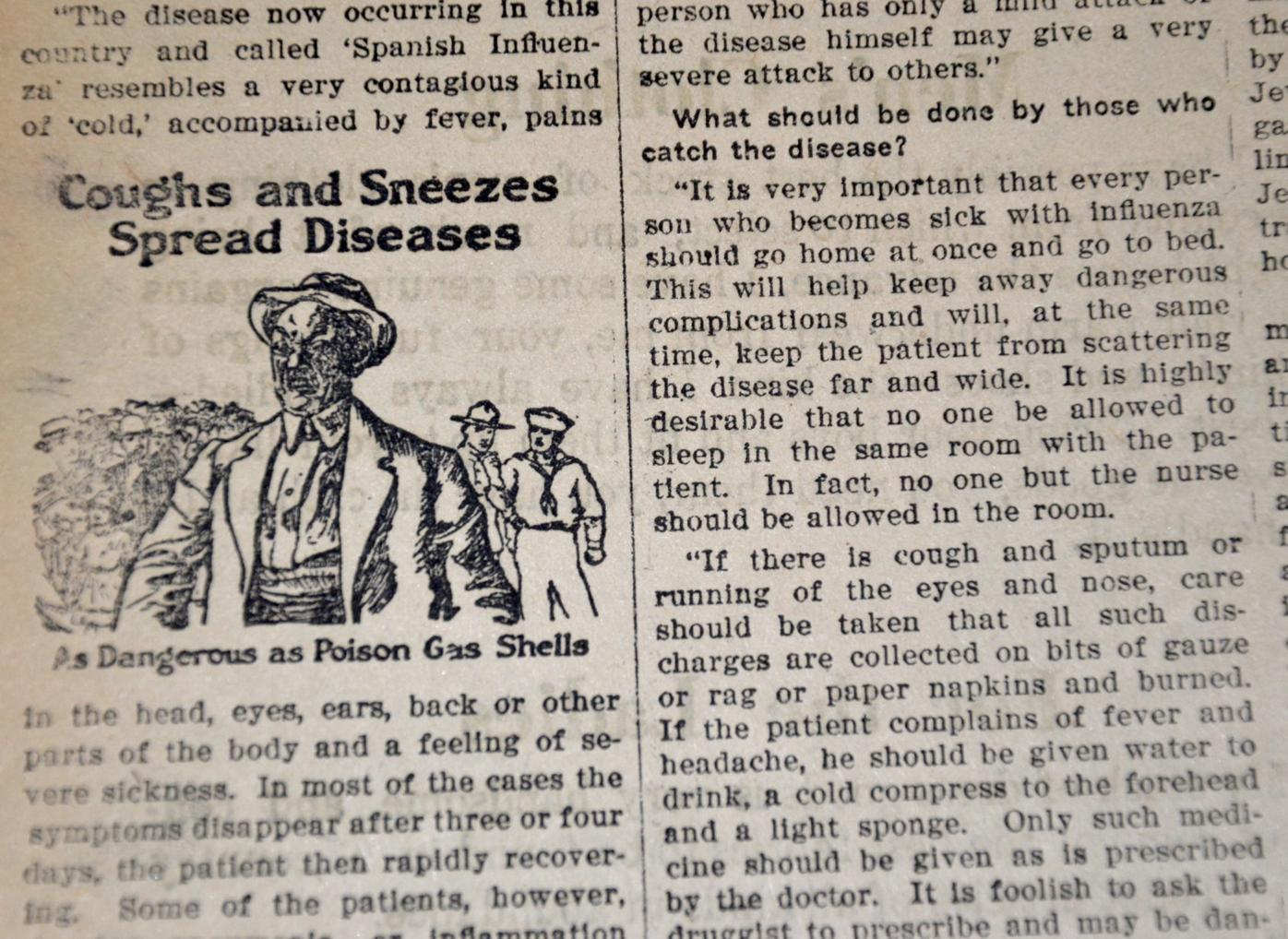 An Oct. 24, 1918, article in the Watauga Democrat discusses the Spanish Flu. 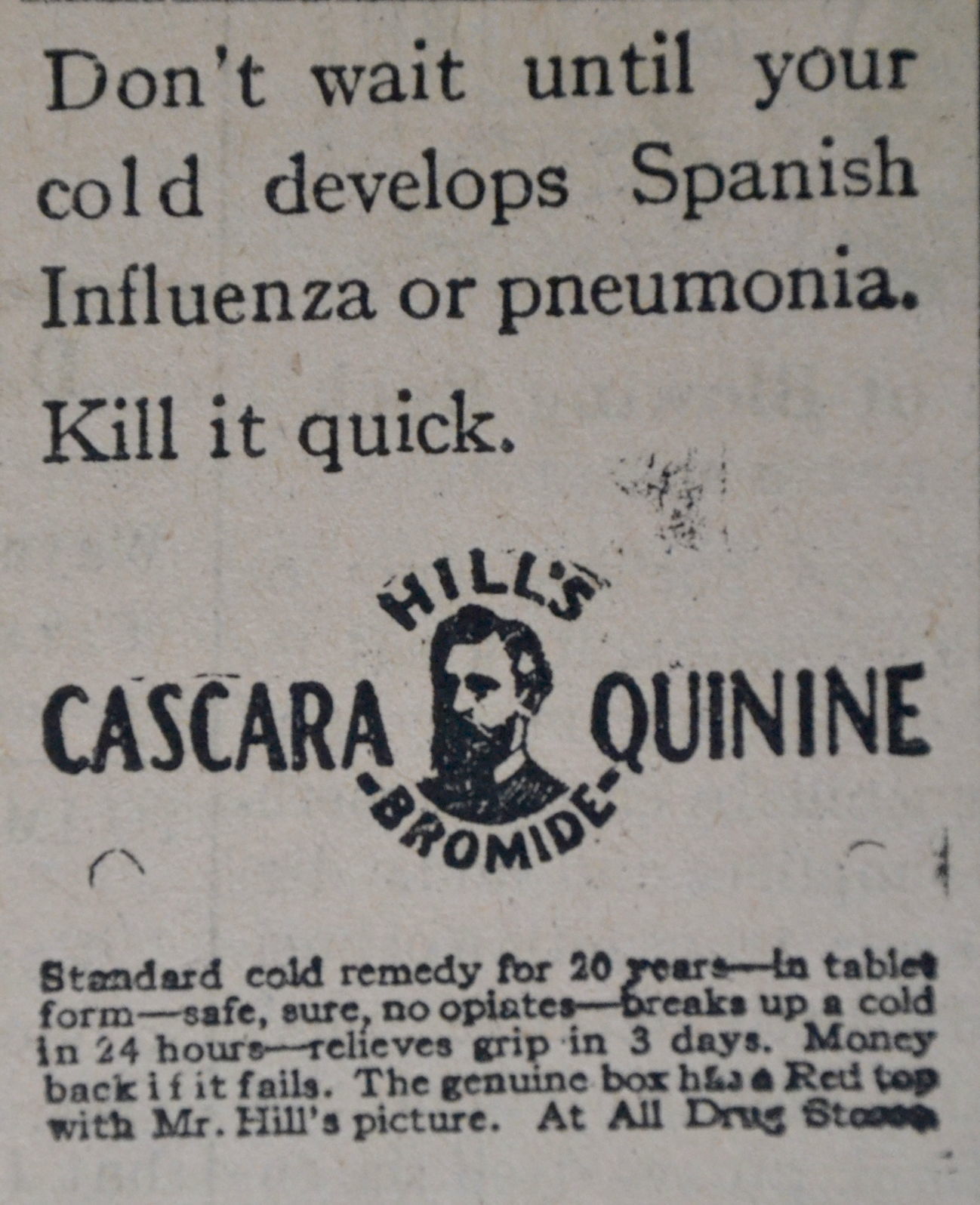 A Nov. 21, 1918, advertisement showcases a medicine for the Spanish Flu and pneumonia. 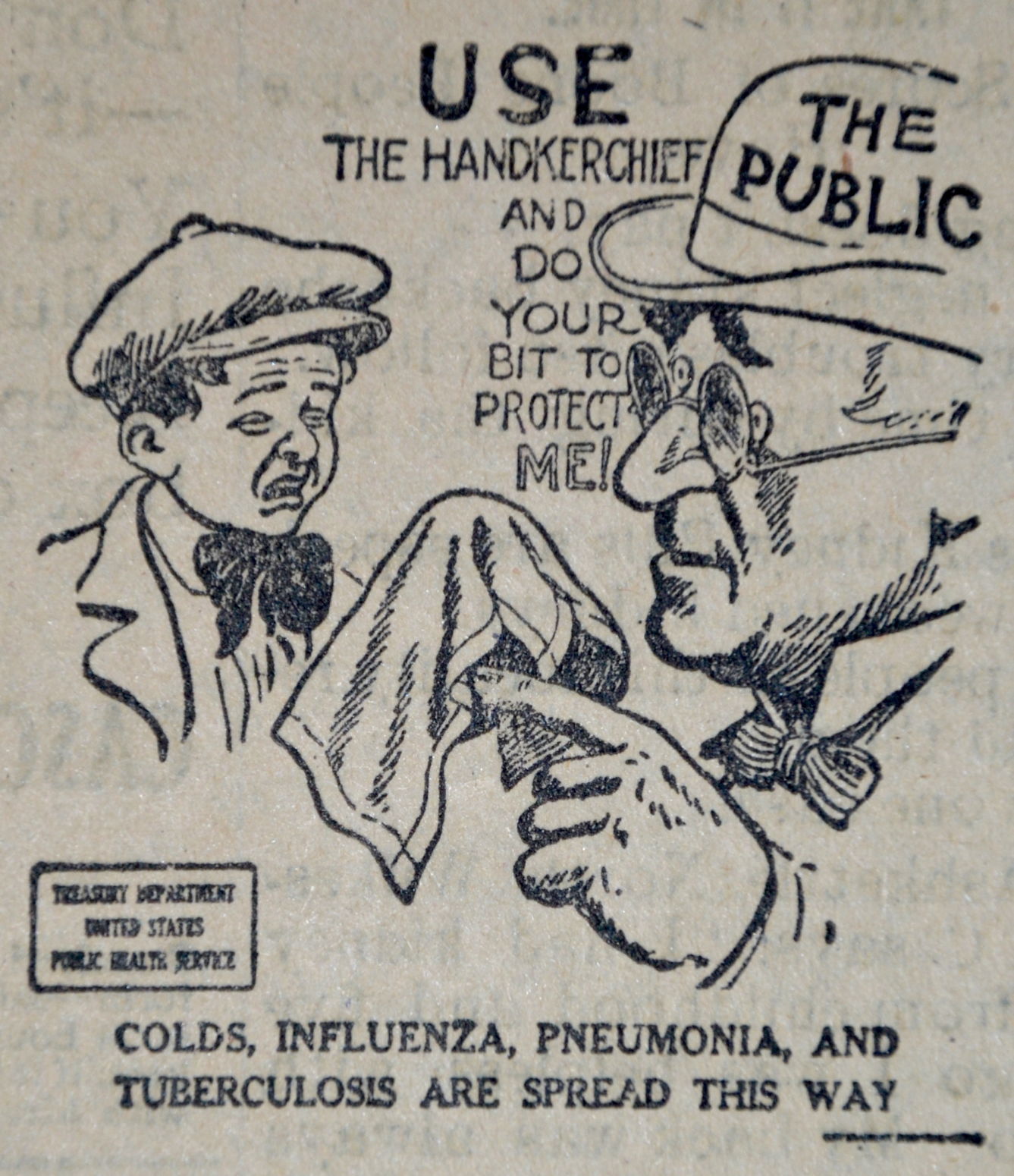 A Dec. 7, 1918, advertisement in the Watuaga Democrat advises that people should use a handkerchief.

A late 1918 Watauga Democrat article talks about influenza and pneumonia.

An Oct. 24, 1918, article in the Watauga Democrat discusses the Spanish Flu.

A Nov. 21, 1918, advertisement showcases a medicine for the Spanish Flu and pneumonia.

A Dec. 7, 1918, advertisement in the Watuaga Democrat advises that people should use a handkerchief.

As the world is in the throes of the worst virus outbreak of this century, the Watauga Democrat looks into its archives to remember another pandemic — the 1918 Spanish flu.

The 1918 Spanish influenza was first confirmed to have made its way to North Carolina on Sept. 19, 1918, when an individual in the port city of Wilmington became sick from the illness, according to a report from the N.C. Department of Natural and Cultural Resources.

“Within a week the hard-struck city reported some 400 cases of the illness. It was a sign of the devastation yet to be wrought by the pandemic. At the height of the flu outbreak during the winter of 1918-1919 at least 20 percent of North Carolinians were infected by the disease. The so-called ‘Spanish Lady’ killed nearly 14,000 citizens of the state,” the NCDNCR stated.

The pandemic is mentioned by the Watauga Democrat — founded in 1888 — in an article titled “How to treat influenza” from the Oct. 10, 1918, edition of the paper, when reports revolved largely around the happenings of World War I.

“How to treat influenza” included guidance from the city health department from Charlotte regarding steps individuals could take to feel better from the Spanish flu.

“Go to bed. Take a putative medicine. Follow this in a few minutes with proper doses of quinine and aspirin, which may be repeated every two or three hours until several doses have been taken,” the article states.

Additionally, caregivers were encouraged to “wear a strip of cloth across (the) nose and mouth, which is moist with a germicide,” and readers were reminded that “all physicians will be very busy.”

The Oct. 17, 1918, Watauga Democrat article titled “The epidemic of grippe” detailed the intensity of the disease and the measures that were “failing” to keep the public healthy.

“Already, the disease has appeared over the entire state … The rapidity with which it travels and the larger percent of the population involved indicate the exceptionally contagious nature of the disease, and … public health measures have little influence.”

The article goes on to say “the disease is due to spit swapping,” which includes practices such as “coughing or sneezing into the air,” “soiling the hands with spit and transferring the spit to (other surfaces)” and “using common drinking dippers and cups.”

An additional article about the Spanish flu in the High Country, from Oct. 31, 1918, is titled, “Sulphur good influenza preventative.”

A doctor from Georgia called on his experiences using sulphur during the Yellow Fever, “an epidemic in 1897,” to “kill the germ” that caused the infection. This was done by “sprinkling sulphur in (his) shoes every morning during the epidemic.”

“I believe when the system is thoroughly saturated with the sulphur, as suggested, it will prevent any germs of any disease from attacking the system,” the article states.