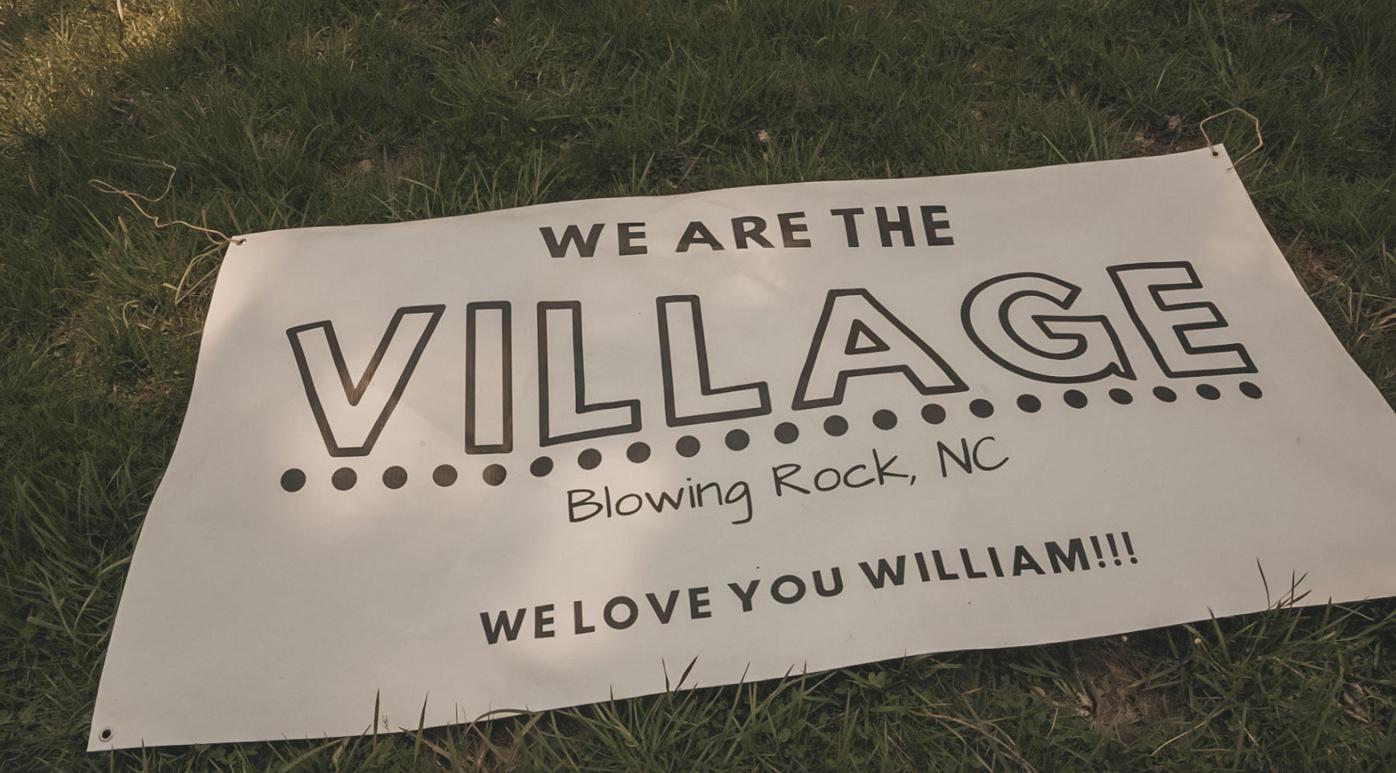 One of the banners showing support for sixth-grader William Greene III of Blowing Rock. 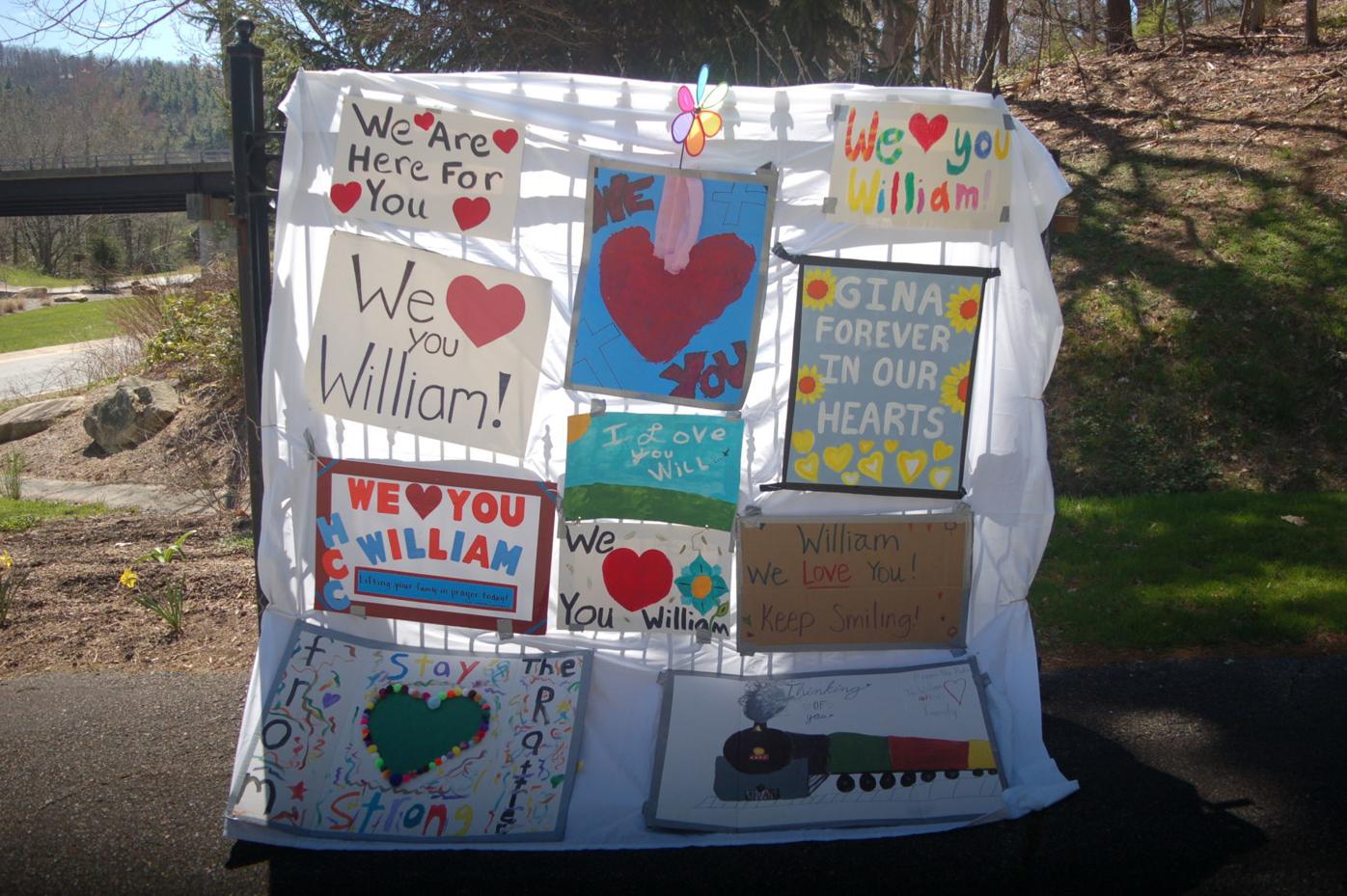 Woodlawn Cemetery in Blowing Rock is adorned with well wishes for William on Saturday, April 4. 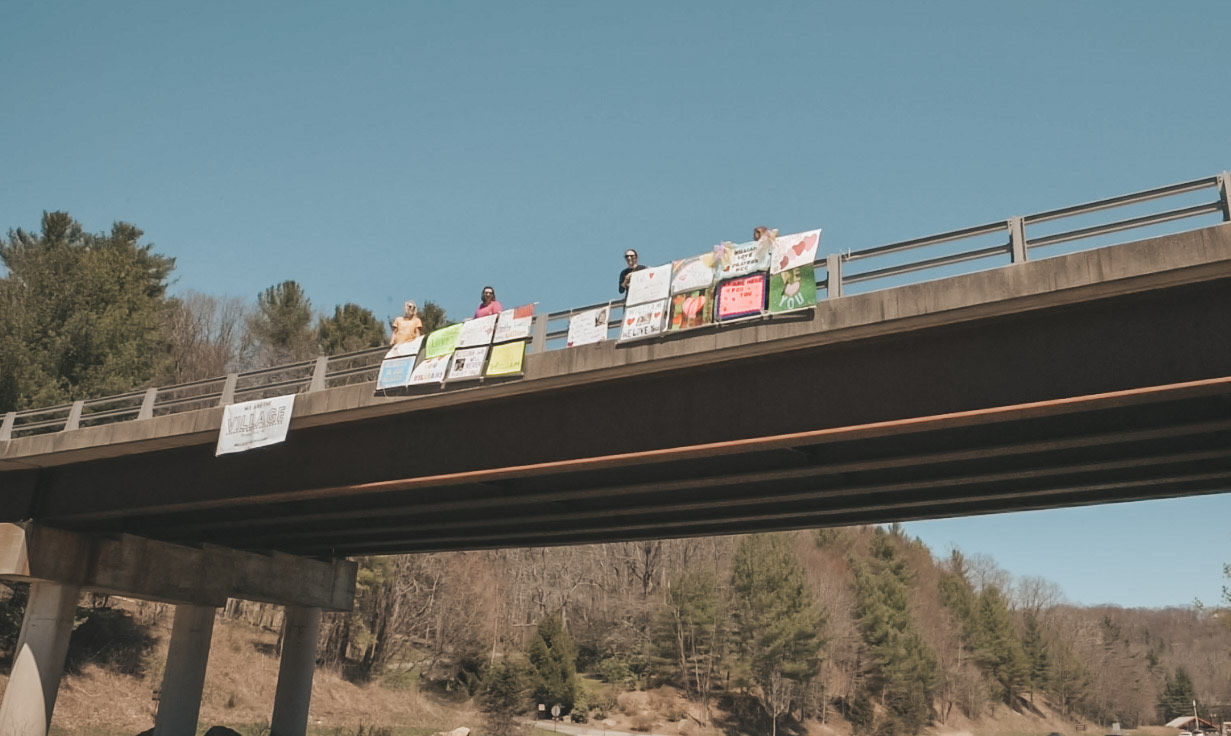 Community members stand on a Blue Ridge Parkway bridge with posters of well-wishes. 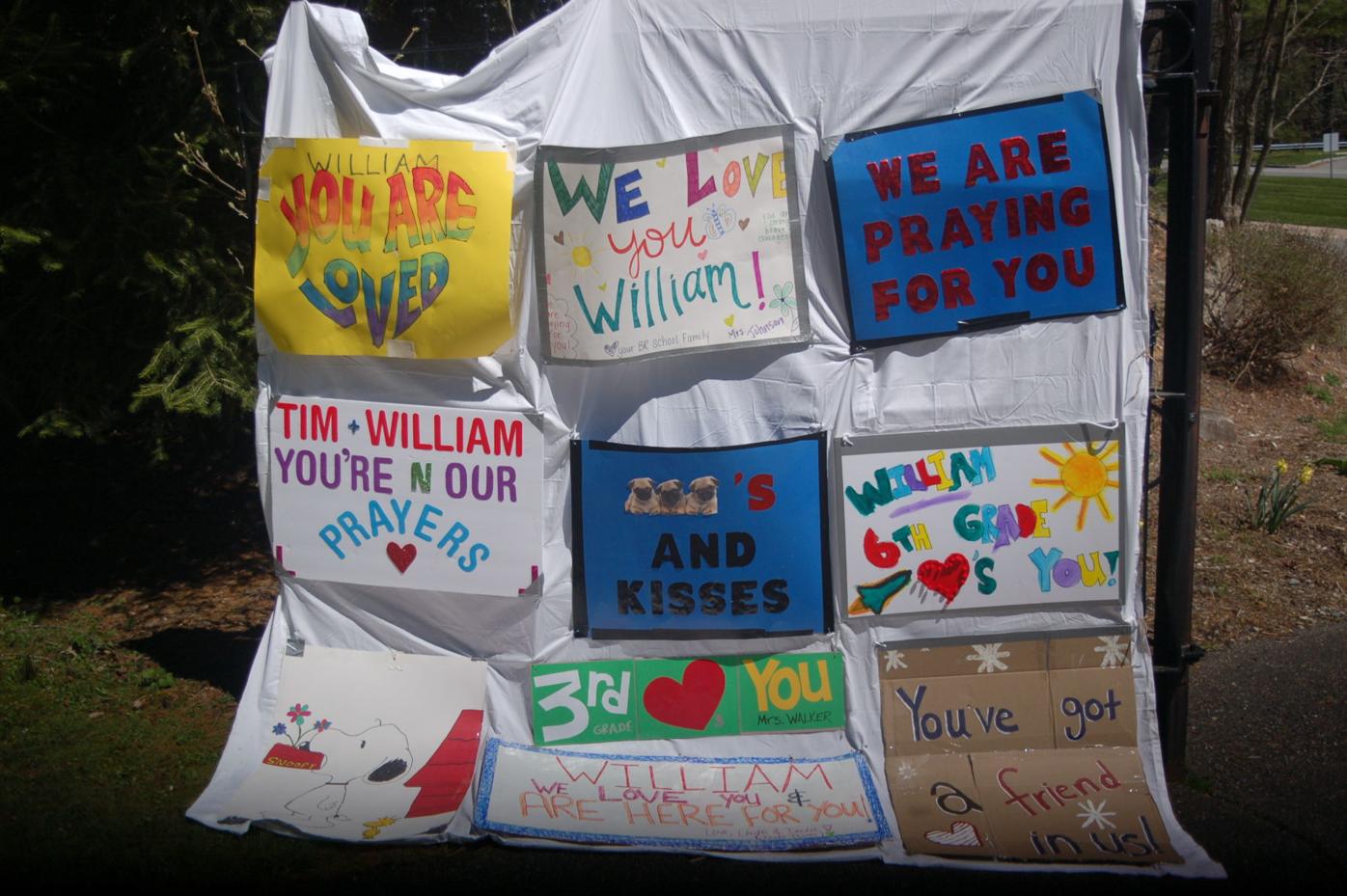 The gates of Woodlawn Cemetery in Blowing Rock on Saturday, April 4. 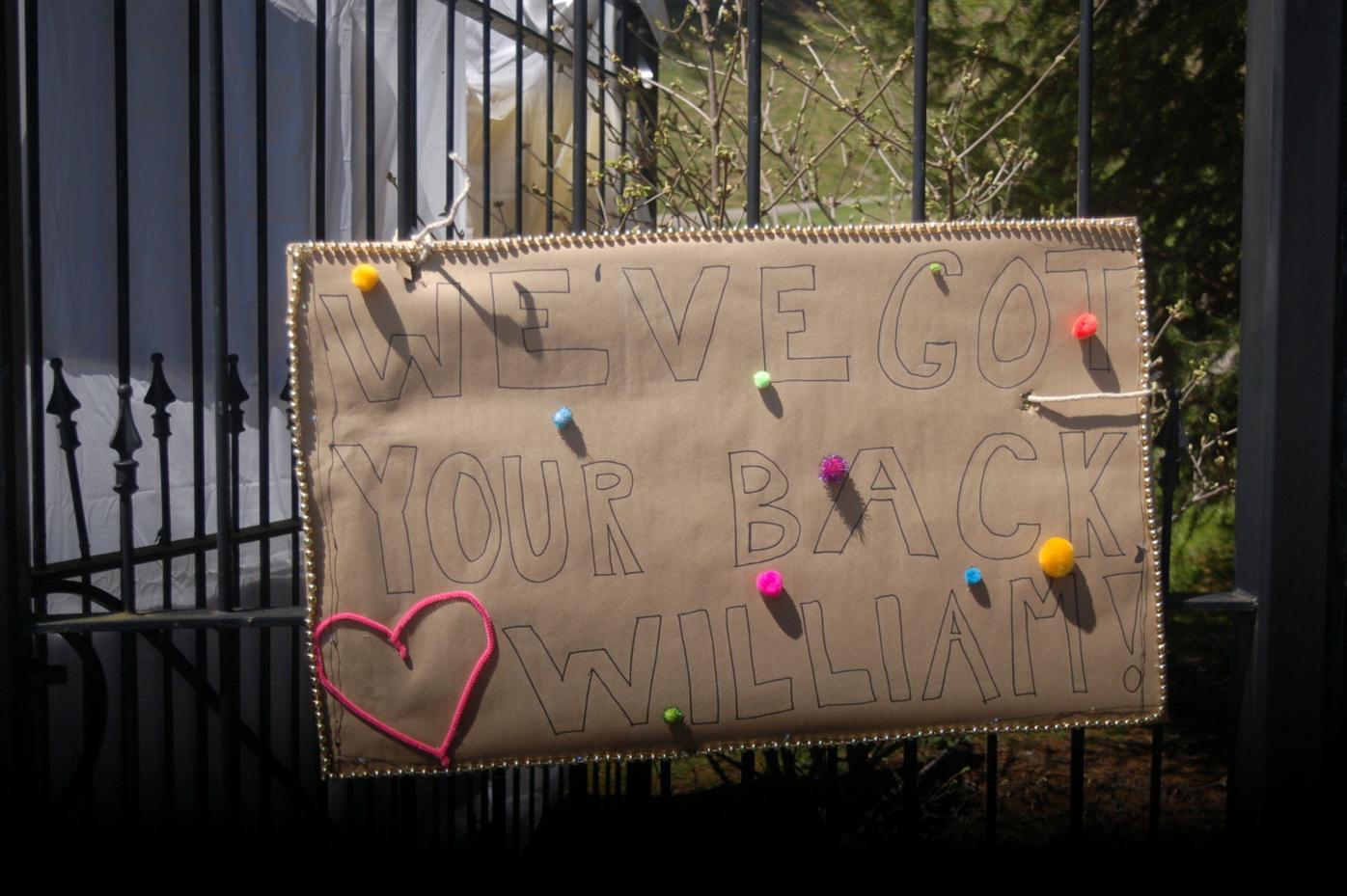 One of the many messages for William on the gates of Woodlawn Cemetery on Saturday, April 4.

One of the banners showing support for sixth-grader William Greene III of Blowing Rock.

Woodlawn Cemetery in Blowing Rock is adorned with well wishes for William on Saturday, April 4.

Community members stand on a Blue Ridge Parkway bridge with posters of well-wishes.

The gates of Woodlawn Cemetery in Blowing Rock on Saturday, April 4.

One of the many messages for William on the gates of Woodlawn Cemetery on Saturday, April 4.

BLOWING ROCK — In the span of two days, from April 2 to April 4, the town of Blowing Rock rallied together to show support for a young community member who lost his mother, Regina Greene Pelsmaeker, on Monday, March 30.

William Greene III is a sixth-grader at Blowing Rock School, and he is known by friends and community members to love dance, live productions and parades.

The effort, lovingly dubbed William’s Parade, was organized by Amber Hendley and Kristen Sokolnick, both of Blowing Rock, who saw the importance of abiding by social distancing guidelines and also wanted to remind William he’s not alone.

Both organizers have connections to the Greene family, making the loss close to their hearts. Hendley said that her son is best friends with William, and the families are neighbors.

“Just seeing all of the cars lined up before the parade — that was a sight,” said Hendley, who is also William’s clogging and dance instructor.

“With William out of school, he wouldn’t get the support from his peers that he would normally get. I wanted to get something in the works,” Sokolnicki said. “Amber and I got in contact with each other on Thursday. We spoke and got it all planned in two days.”

William’s Parade took place on April 4, as more than 150 cars lined up to pass by his home in Blowing Rock to share messages of hope, love and support as the COVID-19 pandemic resulted in a private funeral service.

Many cars featured homemade posters and signs that were given to the family. Hendley said that she, Sokolnicki and other community members also made “big banners” and hung them over the parkway bridge and cemetery gates, so that the family would see them as they pulled up for the graveside service at Woodland Cemetery.

Community members remembered Regina and the love she had for her son during and after William’s Parade.

“She was a wonderful person,” said Patrick Sukow, principal of Blowing Rock School, who also noted that he has known William and his family since he was in kindergarten. “She had huge support of William, whether that be in academics or in dance.”

Blowing Rock Mayor Charlie Sellers has known her family for many years, as Regina’s father is a former Blowing Rock chief of police who died in the line of duty in 1963. Sellers and his wife, Deatra, led the vehicle processional, which lasted for about half an hour.

“Everyone was observing the distancing (guidelines). Police officers were out of cars, but everyone else stayed in their vehicles,” said Sellers. “It wasn’t only people from Blowing Rock — there were people there from Boone, Aho and down the mountain. It said a lot for uncertain times.”