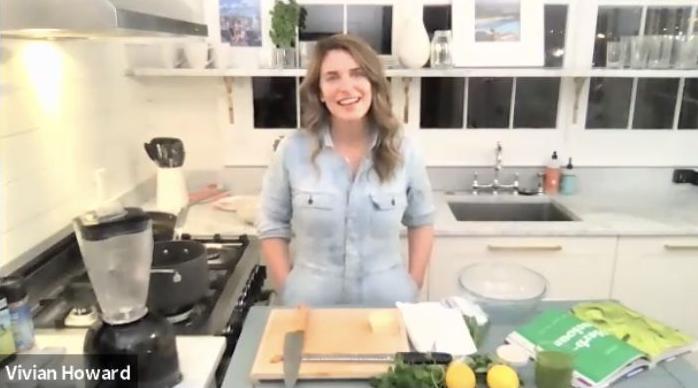 The planning committee for On the Same Page, Ashe County’s literary festival presented a special online event with Chef, restaurateur and TV personality Vivian Howard on Nov 19. Howard discussed her new book, cooking, and completed a Q&A session with the audience.

This virtual event was hosted by author and food blogger Georgann Eubanks.

The planning committee for On the Same Page, Ashe County’s literary festival presented a special online event with Chef, restaurateur and TV personality Vivian Howard on Nov 19. Howard discussed her new book, cooking, and completed a Q&A session with the audience.

This virtual event was hosted by author and food blogger Georgann Eubanks.

WEST JEFFERSON — The On the Same Page Literary Festival was held for the 13th consecutive year. Due to COVID-19, this year’s event was held virtually on Nov. 19.

Viewers tuned via Facebook Live from 6-7:30 p.m. The event was recorded and can be watched at any time by visiting the Facebook Page for the festival @On the Same Page Literary Festival.

During the virtual event, Howard was in the kitchen of an Airbnb in Charleston, S.C. She discussed her newest cookbook, “This Will Make it Taste Good” was released on Oct. 20. The book contains 10 chapters and each one is about a “flavor hero”, which is a recipe she makes and uses across all food she cooks.

In front of the audience, Howard made one of her “flavor heroes” which is made by creating a base containing individually peeled garlic cloves and olive oil. She then adds basil, italian parsley, salt and scallions along with lemon zest and juice created from a Meyer lemon to a blender.

She then grated parmesan cheese, which she added to the blender and kept the parmesan rind.

“Never throw that away,” Howard said. “Save that, put it in the freezer in a bag.”

According to Howard there are a plethora of ways to repurpose it and her book contains several suggestions of how to use parmesan rind in other recipes.

After making the flavorful ingredient, Howard said to store it in the refrigerator in a sealed container. It can be stored for up to a month.

According to Howard, it makes a great addition to classic meatloaf recipes and also works well when used in an omelette.

“There are a million ways to use this,” Howard said.

During the presentation, Howard added it to leftover mashed potatoes to make potato cakes.

Howard was born in Deep Run, N.C., and grew up on a tobacco farm. Growing up, she and her family would go on vacation in the fall in the mountains and begin their trip in Boone.

“My dad loved the Dan’l Boone Inn, we would be the first people in line before it opened,” Howard said. “And we would always eat there and then drive all through that area, the West Jefferson/Ashe County area.”The event ended with a Q&A session based on questions submitted from the audience for Howard.

More information about Howard, her cooking and her cookbooks can be found on her website at www.vivianhoward.com. Also available on the website are links to purchase her two cookbooks, “Deep Run Roots” and “This Will Make It Taste Good.”