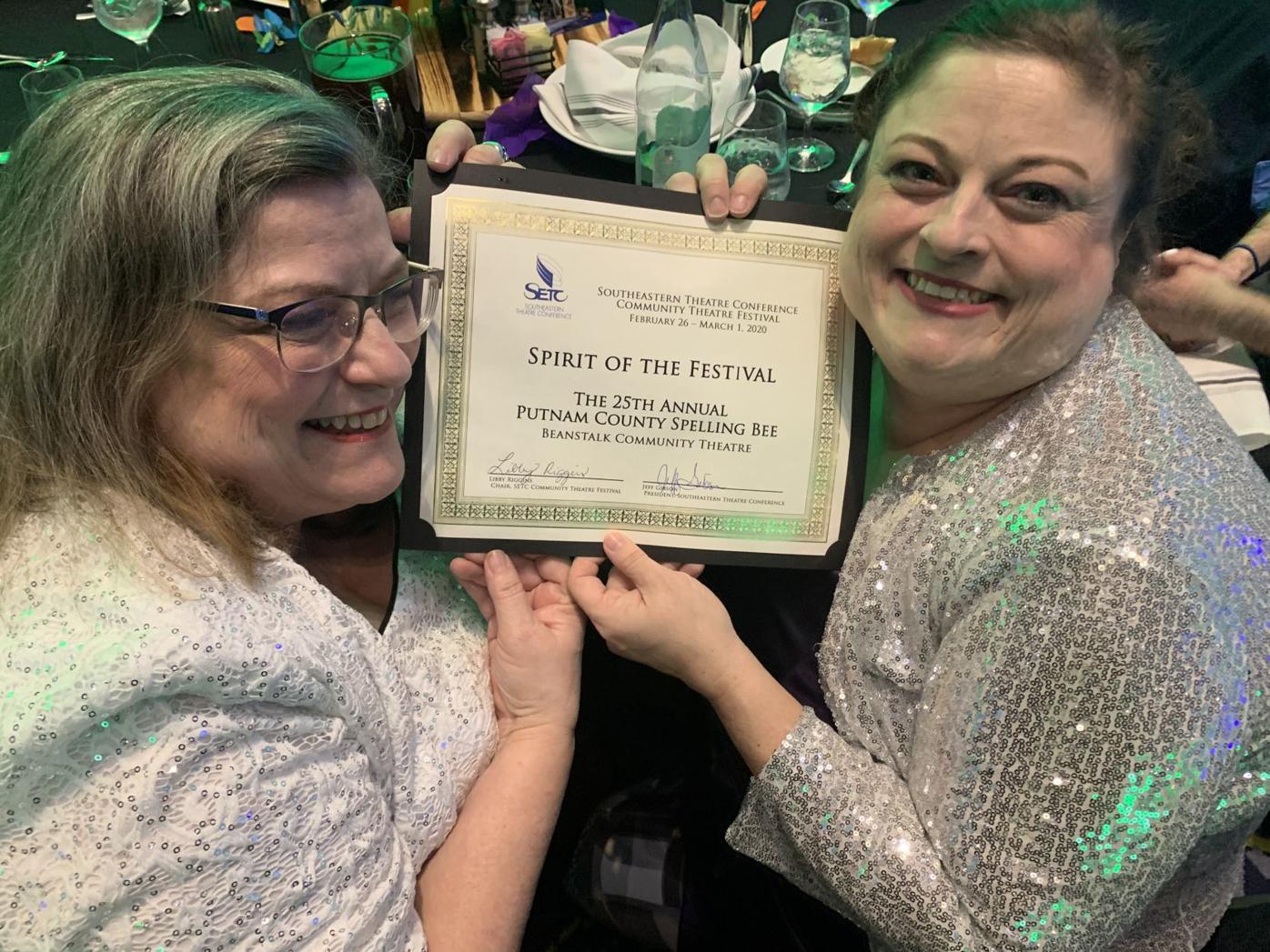 Founders Andrea McDonough and Amy Beane of Beanstalk Community Theatre pose with the company award at SETC. Beanstalk performers presented ‘The 25th Annual Putnam County Spelling Bee’ at the festival and were awarded the Spirit of the Festival Award. 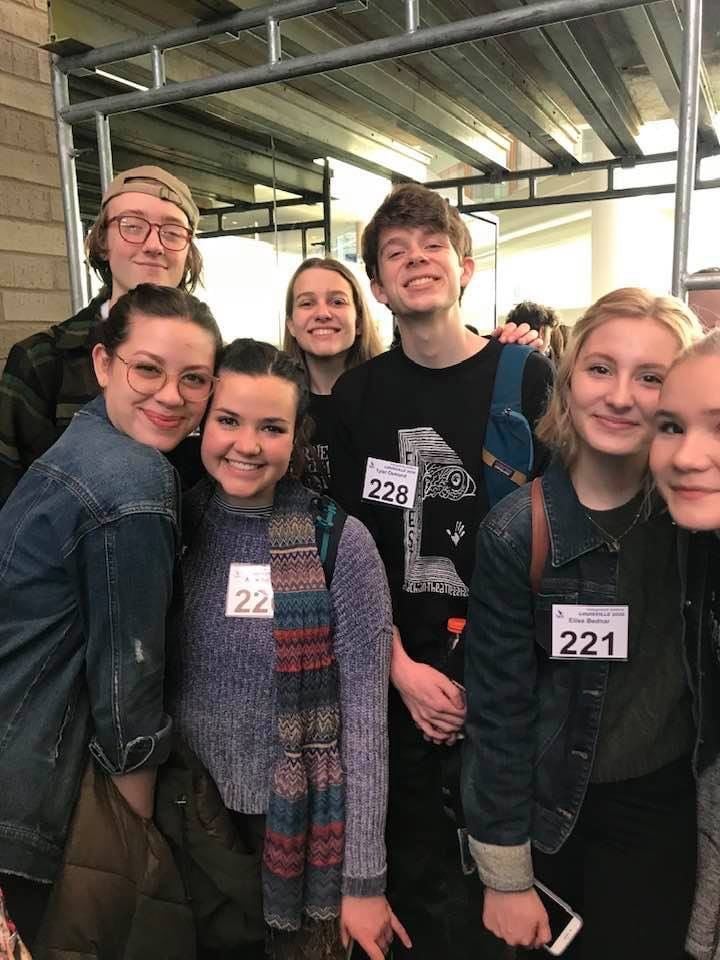 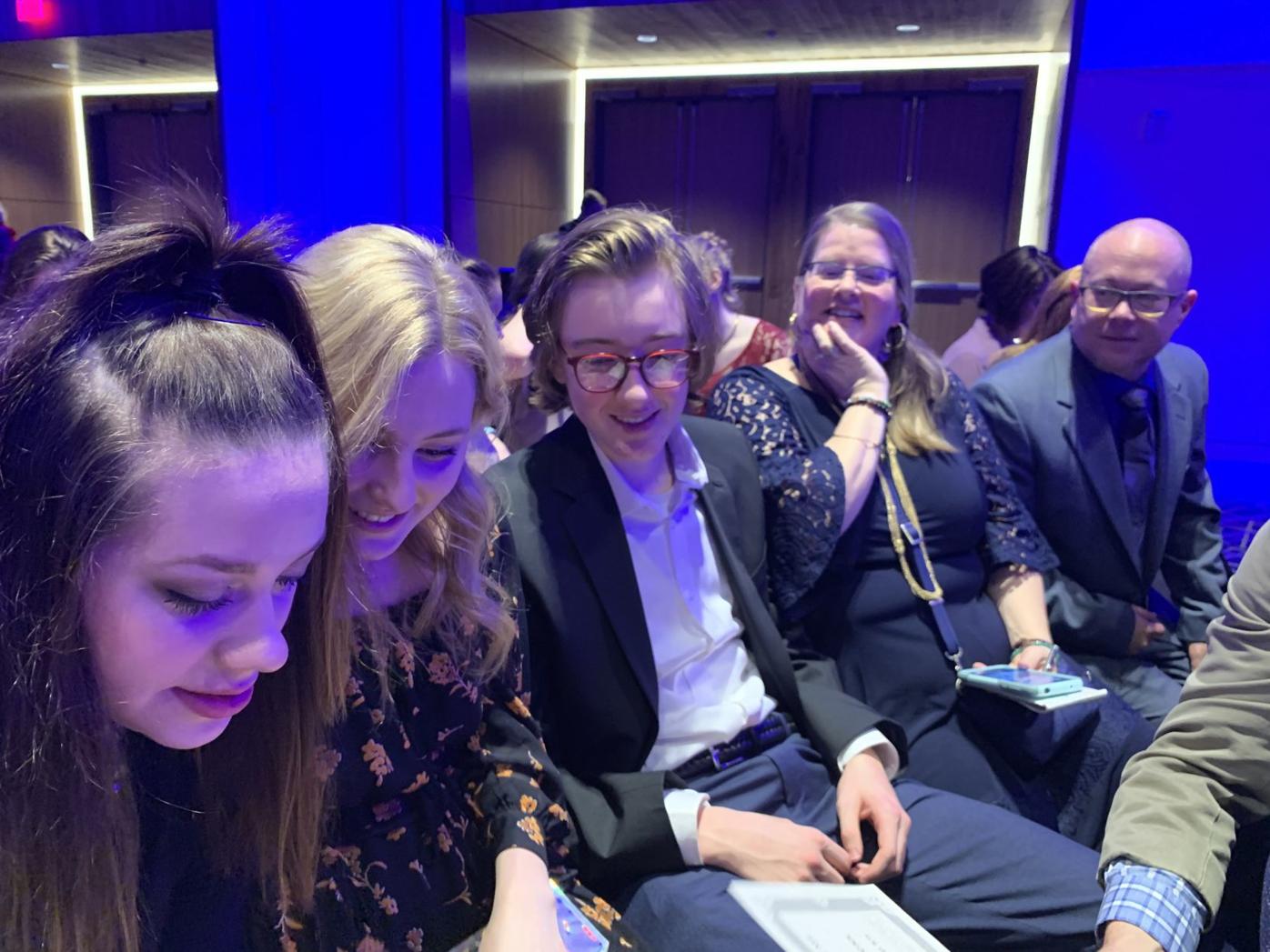 At the SETC awards recognition ceremony, members of the Pioneer Playmakers celebrate four major awards from a team of professional adjudicators. From left to right are WHS thespians Madi Marlowe, Elise Bednar and Zeb Scott, along with teacher Sarah Miller and director Zach Walker. 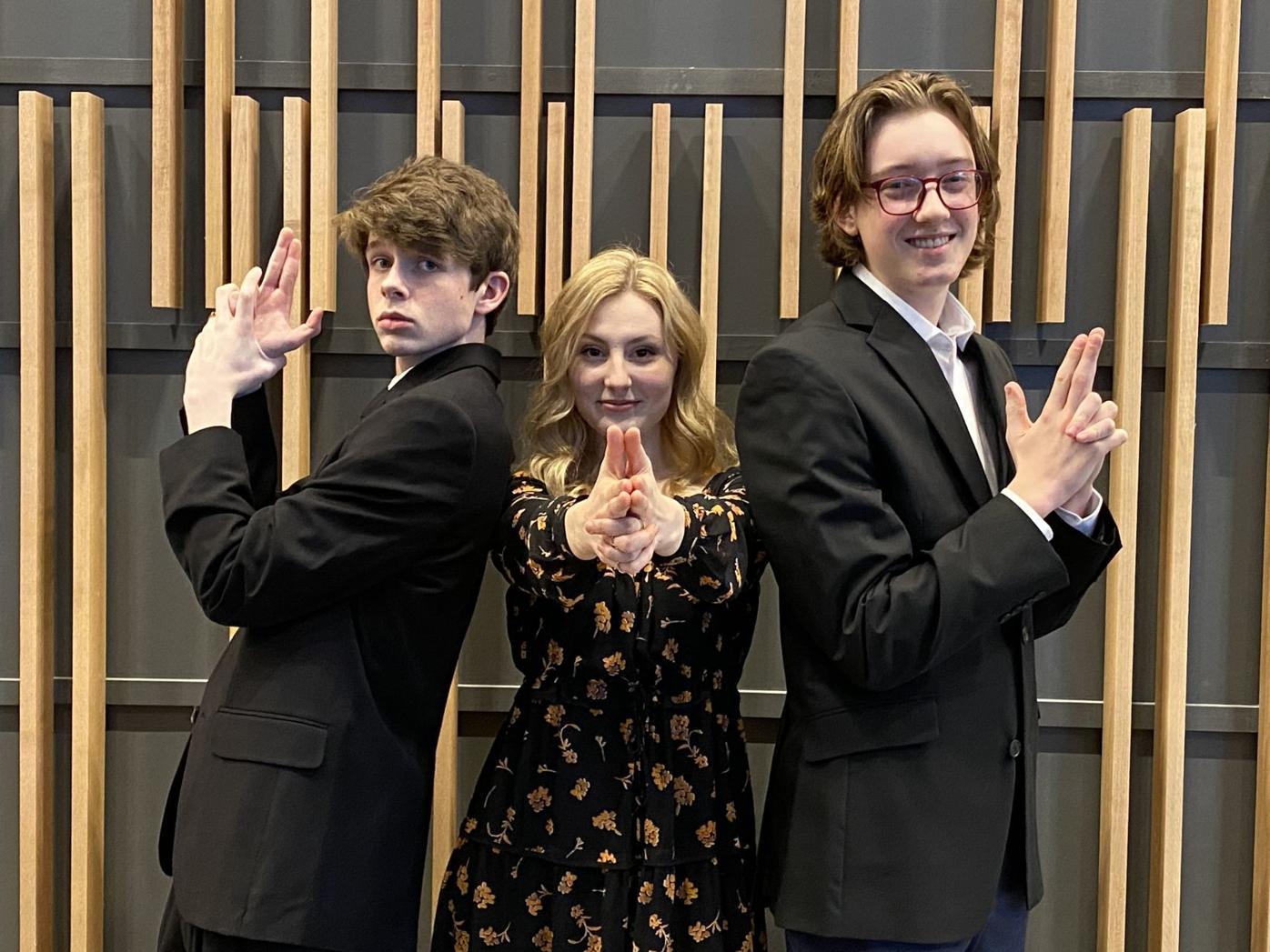 The WHS Playmakers pose with their supporters, including parents, family members and friends, at the Southeastern Theatre Conference. The Playmakers brought home four awards from the conference. 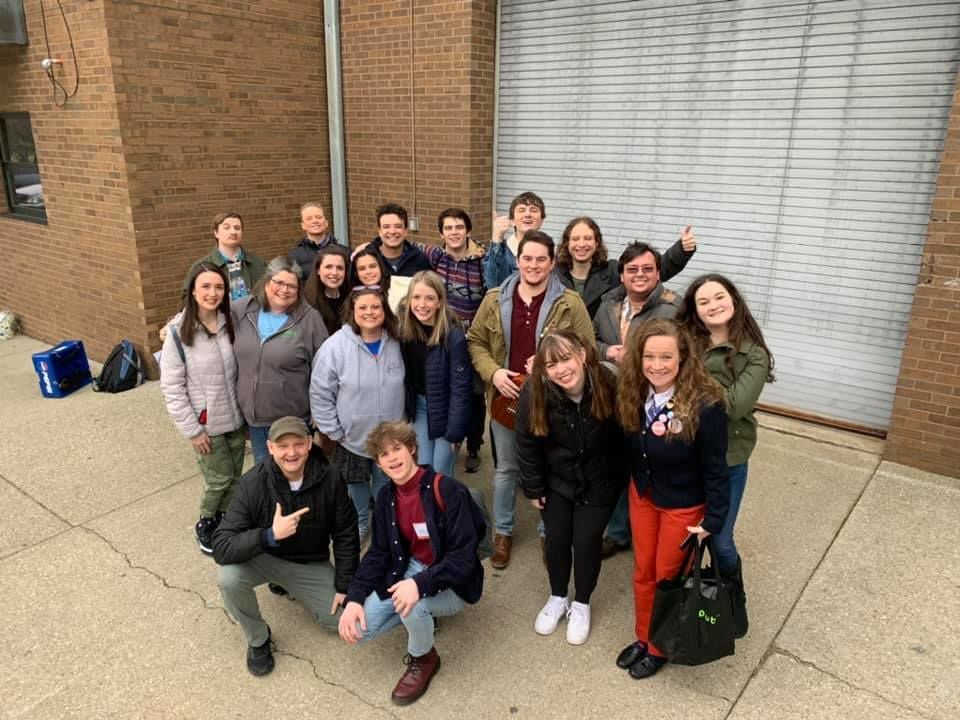 Members of the Beanstalk Community Theatre of Boone pose in Louisville, Ky., during the Southeastern Theatre Conference in February.

Founders Andrea McDonough and Amy Beane of Beanstalk Community Theatre pose with the company award at SETC. Beanstalk performers presented ‘The 25th Annual Putnam County Spelling Bee’ at the festival and were awarded the Spirit of the Festival Award.

At the SETC awards recognition ceremony, members of the Pioneer Playmakers celebrate four major awards from a team of professional adjudicators. From left to right are WHS thespians Madi Marlowe, Elise Bednar and Zeb Scott, along with teacher Sarah Miller and director Zach Walker.

The WHS Playmakers pose with their supporters, including parents, family members and friends, at the Southeastern Theatre Conference. The Playmakers brought home four awards from the conference.

Members of the Beanstalk Community Theatre of Boone pose in Louisville, Ky., during the Southeastern Theatre Conference in February.

LOUISVILLE, Ky. — The Pioneer Playmakers from Watauga High School in Boone captured four awards at the Secondary School Theatre Festival held during the 71st Annual Convention of the Southeastern Theatre Conference, which concluded on March 1 in Louisville, Ky.

In addition, Beanstalk Community Theatre received a coveted award at SETC’s Community Theatre Festival, while Winston-Salem-based North Carolina Black Repertory Theatre, who will make their third annual appearance in Boone on July 17 as part of An Appalachian Summer Festival, were honored with the organization’s highest recognition, the 2020 SETC Distinguished Career Award.

Playmakers Elise Bednar and Zeb Scott received SETC Best Supporting Performance and SETC All Star Cast recognition, respectively, for the roles of Gwendoline and Ernest, continuing a streak that began in November 2019 at the North Carolina Theatre Conference with their selection as Best Actress and Best Actor. Classmate Jayce McClure was honored with Best Sound Design at the SETC Festival, having received an Excellence in Design and Production award at the NCTC regional level. Finally, the adjudicators created a special recognition with the Judges Choice Award for “Masterful and Most Creative Use of Elastic Bands,” a central design element in the WHS production of Oliver Lansley’s “Ernest and the Pale Moon,” an announcement that drew cheers and laughter from the audience at the festival recognition ceremony.

WHS was the fourth of 20 productions performing in Louisville, taking the stage of the Bomhard Theater at 1 p.m. on Thursday, Feb. 27, the first day of the festival, receiving sustained applause and a standing ovation from more than 600 audience members in attendance. The troupe followed shows from high schools in Georgia, Virginia and Tennessee, and set a very high bar for those that followed from seven other states, receiving 298 out of a possible 300 points from the judges.

“Wow,” was the first word uttered by Diane Carr from Cincinnati, Ohio, the first of three professional adjudicators who responded to each of the performances. She commended WHS on the challenging nature of the material, the strong stage pictures created by the director and singled out “the outstanding costumes” by student designers Cole Burch and Maggie McCullough.

Professor Dylan Bollinger from Kansas City, Mo., said, “North Carolina should be very proud,” and commented on “brilliant choices” with “seamless movement” made by the cast members. Gai Laing Jones, president of the Educational Theatre Association is from Santa Barbara, Ca. She cited the “strength of ensemble” and noted “the little things” and keen “attention to detail” that she felt were “genius” and helped keep the audience “engaged and entertained” throughout the performance.

In addition to the play festival, the Pioneer Playmakers participated in dozens of workshops with theater professionals across the nation, with several juniors and seniors from WHS auditioning in front of over 100 colleges and universities from all over the United States.

According to WHS theater teacher Sarah Miller, her students collectively received more than 500 call backs from these educational institutions.

“It’s exposure and experience that they simply can’t get in Boone,” said Miller. “We are bursting with pride at how well they represented North Carolina with professionalism and tenacity, and with the teamwork they displayed.”

Director Zach Walker reflected on the entire journey that began seven months ago.

“So proud of the journey with this ensemble, so proud of this parent group, our community, Sarah Miller and my family. ‘Ernest and the Pale Moon’ is a piece that will always stay with me, and I know it will be a piece of these folks for a long time.”

Miller said that the WHS entourage numbered 75 people, including 50 parents, family members and friends who made the journey to SETC along with 23 Pioneer Playmakers and two faculty.

“It’s important to note that the community helped us achieve our $20,000 fundraising goal even before our gala performance at the Appalachian Theatre,” Miller said, noting repeatedly how grateful they were for the support and encouragement of hundreds of people all over the High Country.

WHS senior Alice McCracken Knight chronicled the SETC adventures during their Louisville trip, gathering comments and reflections from her classmates.

“We have learned so much from our peer schools and from workshops … this experience is invaluable,” she said.

Junior Zeb Scott said, “This show has become a part of our lifestyle; it’s important to acknowledge the experience and what we’ve learned together.”

Beanstalk Community Theatre also made the journey to Louisville and represented the state of North Carolina with its performance of “The 25th Annual Putnam County Spelling Bee,” a musical by Rachel Sheinkin and William Finn. Beanstalk received the 2020 Spirit of the Festival award, given by the adjudicators to the company that best exemplifies the collaborative and supportive spirit inherent in avocational theater.

Executive Director Andrea McDonough said that Beanstalk was humbled and excited to be recognized. “This award is given to the theater that most embodies what the festival is about while supporting and encouraging all other theaters. It was better than any outcome we expected!”

Beanstalk’s Creative Director Amy Beane said, “It truly shows our love of what we do and how we try to support others.”

At the SETC awards banquet, McDonough and Beane said they are already planning to participate in next year’s festival.

Audience members at An Appalachian Summer Festival will recognize the recipients of SETC’s highest honor, the 2020 Distinguished Career Award. Since 2018, the North Carolina Black Repertory Theatre has graced the stage at Appalachian State University in Boone with their artistry, with a third engagement scheduled for this summer on July 17 in the Valborg Theatre.

They were recognized for producing The National Black Theatre Festival, founded in 1979 by the late Larry Leon Hamlin, whose mission is “to engage, enrich and entertain with innovative programming that resonates across the community and challenges social perceptions.”

The award was accepted by Executive Producer Sylvia Sprinkle-Hamlin and Director/Playwright Jackie Alexander, who gave a keynote address at the Louisville conference. Appropriately, their award was the last one presented at SETC, which concluded their annual gathering of more than 5,000 participants with a sustained standing ovation for the North Carolina Black Repertory Theatre.