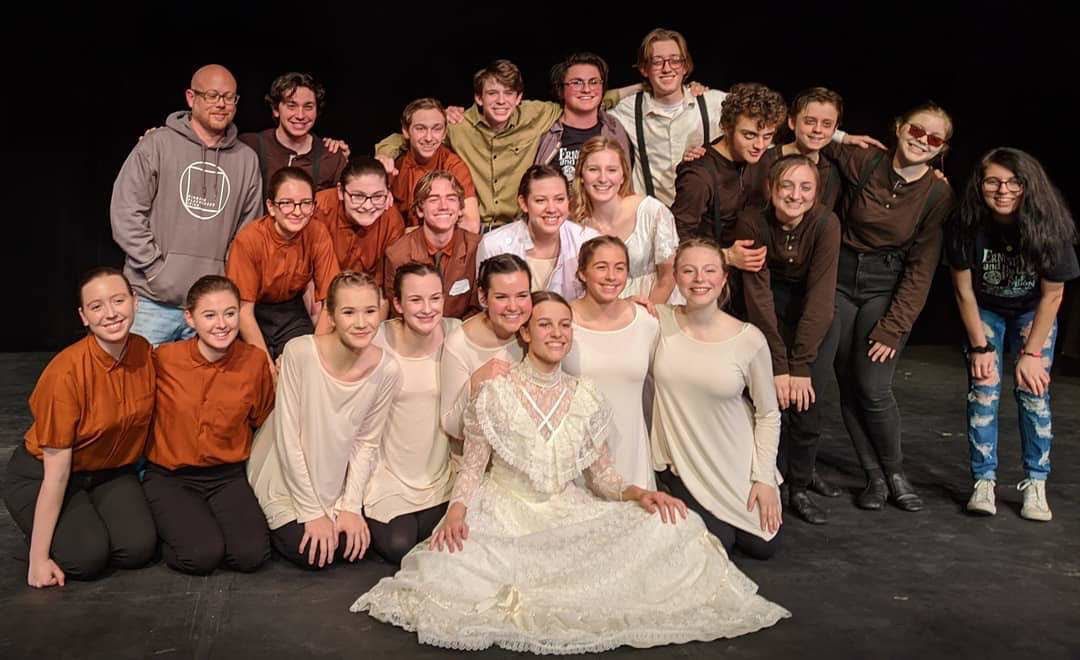 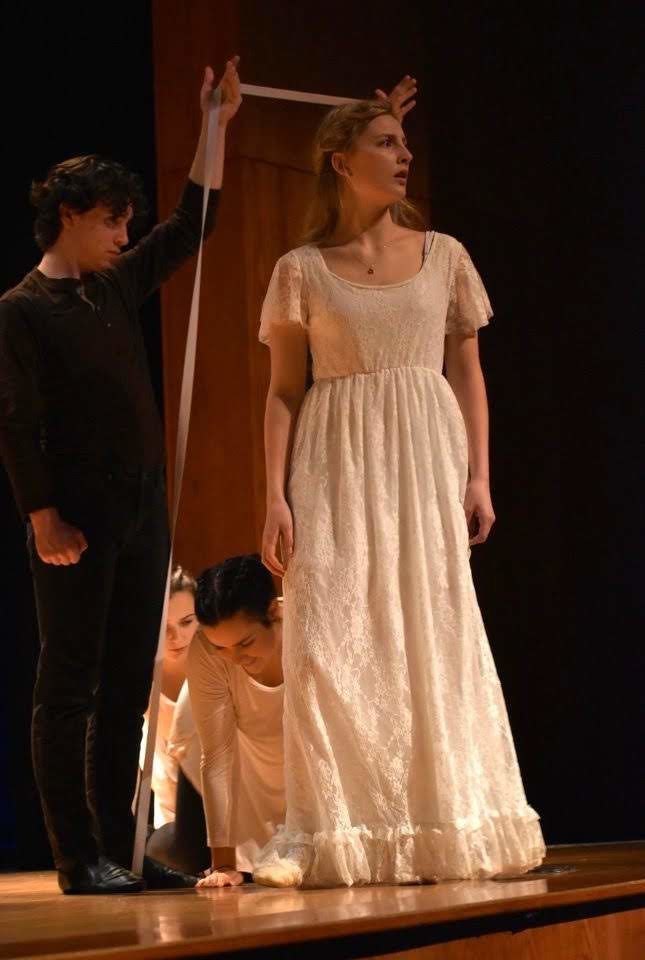 WHS junior Elise Bednar plays the leading role of Gwendoline in ‘Ernest and the Pale Moon’ and is pictured here with cast members (from left to right) Owen James, Maggie McCullough and Alice McCracken-Knight. 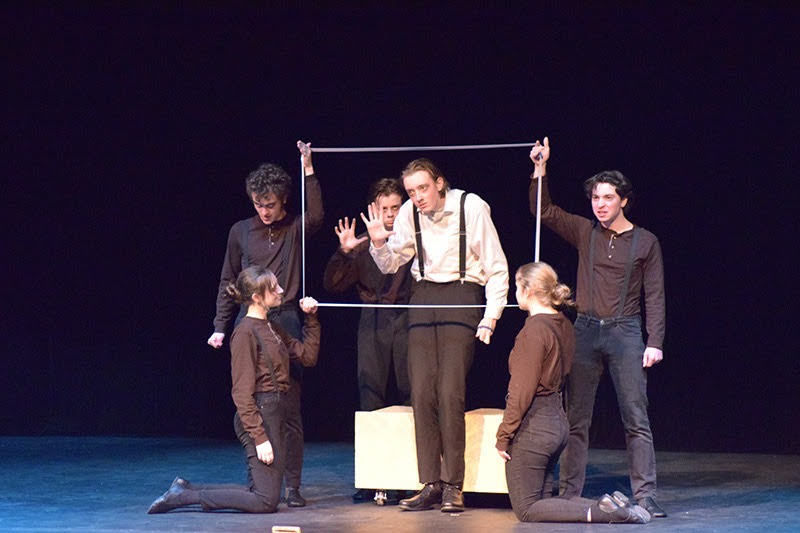 The title role in the WHS production of ‘Ernest and the Pale Moon’ is played by Zeb Scott, center, surrounded by Pioneer Playmakers (from left to right) Faith Giles, Max Midgett, Zeb Scott, Tommie Freundlich and Sean Crothers.

WHS junior Elise Bednar plays the leading role of Gwendoline in ‘Ernest and the Pale Moon’ and is pictured here with cast members (from left to right) Owen James, Maggie McCullough and Alice McCracken-Knight.

The title role in the WHS production of ‘Ernest and the Pale Moon’ is played by Zeb Scott, center, surrounded by Pioneer Playmakers (from left to right) Faith Giles, Max Midgett, Zeb Scott, Tommie Freundlich and Sean Crothers.

BOONE – One week before participating in the nation’s largest theatre conference, the Watauga High School Pioneer Playmakers are presenting an encore performance of its award-winning production of “Ernest and the Pale Moon” at 7:30 p.m. on Friday, Feb. 21, at the Appalachian Theatre in Boone.

It is the last local performance of the play by Oliver Lansley before the troupe takes to the national stage to represent North Carolina at the Southeastern Theatre Conference. The play is being billed as “Edgar Allan Poe meets Alfred Hitchcock” and is recommended for audience members 13 years old and older.

The Playmakers depart for Louisville, Ky., next Wednesday, Feb. 26, where the group will be one of 20 schools from 10 Southeastern states participating in the Secondary School Play Festival. The troupe is nearing completion of a fundraising effort to offset expenses related to the SETC. Miller said that thanks to the generosity of this community, including local businesses and almost 100 individual donors, that the group is closing in on its goal of $20,000.

Watauga High School won the right to advance to SETC in November by sweeping all four major award categories — best production, best director, best actor and best actress — at the state play festival. WHS theater instructor Zach Walker received the prestigious John W. Parker Award for Excellence in Directing, named for the founder of the Carolina Dramatic Association, forerunner of the North Carolina Theater Conference. WHS juniors Elise Bednar and Zeb Scott were both presented Outstanding Achievement in Acting awards for their portrayals in the leading roles of Gwendoline and Ernest, respectively.

“I’m honored to bring one of the first high school student performing groups to the App Theatre,” said Walker. “Laura Kratt and her staff have been so helpful and accommodating in making this performance a reality. The Playmakers feel like this performance makes their trip to SETC — our version of nationals — even more special. We love performing in our space, but having a gala at the App Theatre downtown gives it more of a community feel.”

This is the third state theater championship for the school, following previous wins for the play “Dearly Departed” in 1999, directed by Trimella Chaney, and the production of “John Lennon and Me” in 2007, directed by Sarah Miller. In 2017, Miller and Walker were named co-recipients of the K-12 Theatre Arts Educator Award, presented by the NCTC Board of Directors to recognize individuals who are active members and have exhibited leadership roles in their community.

Miller added that, “The first time I was in the App Theatre was when I was a little girl and it was a movie theatre. We saw so many films there as a family, so I’ve always had a fondness for that space. Touring it when it was in the construction phase years ago was so exciting — what a revelation for me to know that my favorite theater was originally a live performance space! I’m thrilled to be a part of this performance gala.”

“We are hoping that a full house at our gala performance at the App Theatre will put us over the top. Every single penny we raise is going straight to supporting these young actors and our theater department at WHS. We are grateful to live and work in a community that values what we do in such a tangible, supportive manner.”

Walker said that the response from parents, grandparents and alumni has been tremendous.

“We have more than 40 of them who started this journey with these performers since the ensemble started work on this performance in August 2019. Every step along the way, they’ve supported their actors, this department and the artistic journey that we’ve taken with ‘Ernest.’ Due to their willingness to make this trip a reality by engaging in community outreach, these families have done Herculean work in fundraising, working tirelessly to make sure that I could concentrate on their kids and growing the work,” he said.

Part of the gala performance at the Appalachian will include a video titled “What Playmakers Means to Me,” a personal way to connect to WHS Theatre Alumni. Former students were encouraged to share what it meant and/or what they learned from working in this department on the official Facebook page “WHS Theatre Alumni.” Miller said that their answers to the questions have given insight into what the philosophy of the WHS theater department is all about, providing current Playmakers with a larger historical picture of what past students have experienced, while connecting the present with the past.

Tickets are $15 per person and available online at www.apptheatre.org and during box office hours at the theater for in-person and phone sales at (828) 865-3000. The theatre’s onsite box office hours are from 11 a.m. until 3 p.m. weekdays and one hour prior to curtain for each show, depending on ticket availability. The Appalachian Theatre is located at 559 W. King St. in uptown Boone.

Community members wishing to make a donation to the Pioneer Playmakers’ journey to SETC, may send donations via mail to the WHS Theatre Department at Pioneer Playmakers, 300 Go Pioneers Drive, Boone, NC 28607, or donate online at https://www.gofundme.com/f/help-whs-playmakers-get-to-setc.

BOONE — All three governing bodies in the local region are issuing identical proclamations declaring the week of Feb. 23-29 “Pioneer Playmaker Week” throughout Boone and Watauga County. They mark the occasion of the Watauga High School theatre troupe representing North Carolina at the Southeastern Theatre Conference in Louisville, Ky., on the weekend of Feb. 28 through March 1.

The resolutions were unanimously approved by the town of Boone, Watauga County Board of Commissioners and the Watauga County School Board for presentation at an encore performance of their award-winning play taking place on Friday, Feb. 21, at the Appalachian Theatre of the High Country in Boone. The proceeds will benefit fund the group's participation at SETC and offset approximately $20,000 in trip-related expenses.

According to WHS parent Susan McCracken, the proclamations will be read aloud at the Appalachian Theatre to audience members in attendance by Boone Mayor Rennie Brantz, Watauga County Board of Commissioners Chair John Welch and Brenda Reese, vice-chair of the Watauga County School Board, then presented to Pioneer Playmakers Co-Directors Sarah Miller and Zachary Walker. Each of the resolutions reads as follows:

Whereas, the Watauga High School Pioneer Playmakers were created in 1988 and since then have made 18 trips to the North Carolina High School State Play Festival; and

Whereas, the Pioneer Playmakers have won the State High School Play Festival twice before with “Dearly Departed” in 1989 directed by Trimella Chaney, and the production of “John Lennon and Me” in 2007 directed by Sarah Miller; and

Whereas, the 23-member Pioneer Playmaker Ensemble has worked tirelessly since August 2019 to create their own unique interpretation of Oliver Lansley’s “Ernest and the Pale Moon,” showcasing their artistry, craftsmanship, and creativity; and

Whereas, the Pioneer Playmakers Ensemble swept all four major award categories for the first time in history at the State High School Play Festival sponsored by the North Carolina Theatre Conference, including receipt of the following accolades:

Outstanding Achievement in Acting to Elise Bednar and Zeb Scott for their portrayals in the roles of Gwendoline and Ernest; and

Whereas, we desire to express our gratitude to the Pioneer Playmakers for bringing these prestigious honors to our community, while celebrating the talents of the students, and recognizing the tremendous leadership of their faculty, and

Whereas, the Pioneer Playmakers will represent the State of North Carolina next week at the Southeastern Theatre Conference in Louisville, Kentucky and perform on the stage of The Kentucky Center’s Bomhard Theatre;