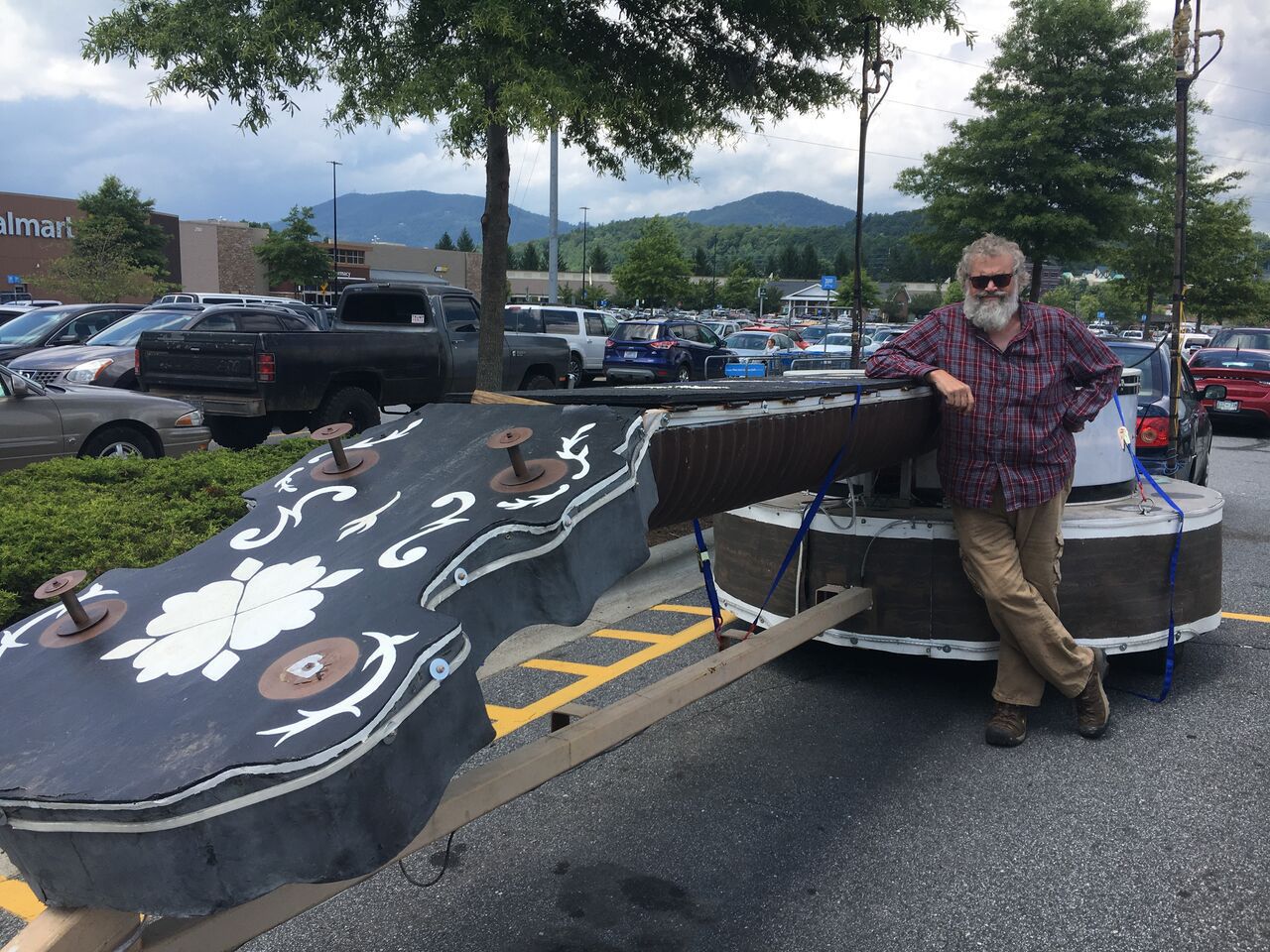 Andy Owens poses with the giant flame shooting banjo that his bluegrass camp is taking to Burning Man. 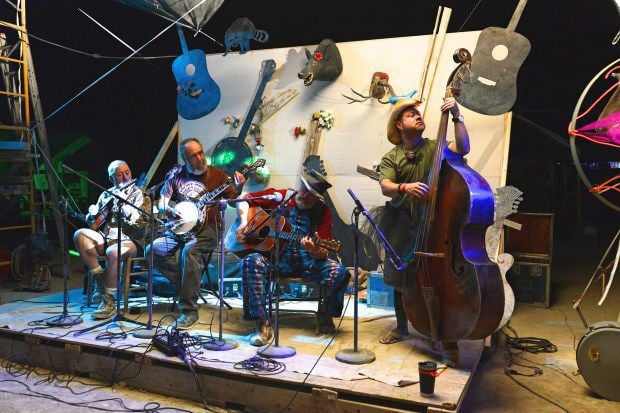 The Rootpile house band performs at a previous Burning Man. 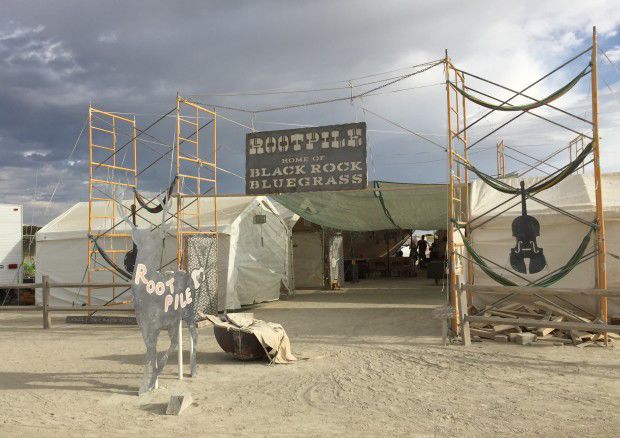 Rootpile has built a camp at Burning Man for the past four years and counting.

Andy Owens poses with the giant flame shooting banjo that his bluegrass camp is taking to Burning Man.

The Rootpile house band performs at a previous Burning Man.

Rootpile has built a camp at Burning Man for the past four years and counting.

For the fifth year, Owens is bringing his bluegrass theme-camp, “Rootpile,” to Burning Man, an annual gathering in which tens of thousands of people create Black Rock City, a temporary metropolis in Nevada’s Black Rock Desert.

While Black Rock City is created by attendees, festival admission is still required, as organizers have to pay to use the land.

The event, which runs Aug. 27 to Sept. 4, is dedicated to community, art, self-expression and self-reliance.

“We’ve grown the camp to 100 people, with people from 15 different countries, and we probably have 25 or 30 professional musicians,” said Owens. “We’re the only bluegrass camp there, so I feel like we’re combating the whole electronic music world that is so prominent at Burning Man by being there.”

“When I first started going to regional Burning Man events, I felt like these were my people,” said Owens. “There was really crazy art and I really felt connected with the whole scene, but the music was terrible. I knew I’d never want to be involved in a leadership role unless I brought what I do there.”

As a bluegrass musician, Owens has had great success since he began playing professionally in Texas in 1975. His biggest claim to fame was playing in a band called Danger in the Air, which later spawned into the Dixie Chicks. Owens’ other musical endeavors include several solo albums under the title, The Andy Owens Project.

As a touring musician, Owens has not only found success in the United States, but internationally as well.

“I had played all over the country up to the mid-’90s, but in the mid-’90s, I went to Japan and did a fundraiser for the Osaka earthquake, and I started thinking, ‘Man, it would be more fun to play internationally,’” he said. “So, for about 10 years, I played in 53 different countries.”

Around the same time, Owens became chairman of the board of the International Bluegrass Music Association, and to add to his resume, he has also been a successful producer and engineer.

Through all of the accomplishments and journeys in his lifetime, Owens said Burning Man stands out as one of the most special places to play.

“Since I’ve been playing festivals and shows my whole life, I discovered in probably about 2010, that there’s other kinds of events that are non-commercial, and that’s exactly what Burning Man is,” he said. “There’s no vendors, you can’t buy anything — you basically go to a flat spot in the dessert with nothing and build an entire city. It’s pretty incredible.”

Owens said Burning Man is more of an arts festival than anything, and he enjoys that aspect of the event just as much as the music.

The Rootpile camp has a couple of “mutated” art cars, including a giant banjo that shoots fire and a mobile stage that looks like a log cabin front porch.

“If you have a vehicle that you want to drive around, it has to be a mutated vehicle,” he said. “To get it approved, you can’t tell what it was before. These functional sculptures are one of the things I like about Burning Man the most. Those mad scientist people are definitely my kind of people.

“I have a kind of weird outlook on life. I really think that the world is like a functional sculpture, and you can sculpt your world however you want. Anything that is physically possible, you can do if you put your mind to it.”

Rootpile is currently raising funds to finish its portable stage and for other needs such as travel expenses. To make a donation and to learn more, visit www.rootpile.com.

“It’s a real challenge because there aren’t many burners that are bluegrass musicians, so I’ve had to take musicians and convert them into burners,” he said. “I’ve done this all pretty much by word of mouth.”

The 10 Principles of Burning Man

Radical Inclusion: Anyone may be a part of Burning Man. They welcome and respect the stranger. No prerequisites exist for participation in the community.

Gifting: Burning Man is devoted to acts of gift giving. The value of a gift is unconditional. Gifting does not contemplate a return or an exchange for something of equal value.

Decommodification: In order to preserve the spirit of gifting, the community seeks to create social environments that are unmediated by commercial sponsorships, transactions or advertising. Burning Man stands ready to protect its culture from such exploitation. They resist the substitution of consumption for participatory experience.

Radical Self-reliance: Burning Man encourages the individual to discover, exercise and rely on his or her inner resources.

Radical Self-expression: Radical self-expression arises from the unique gifts of the individual. No one other than the individual or a collaborating group can determine its content. It is offered as a gift to others. In this spirit, the giver should respect the rights and liberties of the recipient.

Communal Effort: The community values creative cooperation and collaboration. They strive to produce, promote and protect social networks, public spaces, works of art and methods of communication that support such interaction.

Leaving No Trace: The community respects the environment. Burning Man is committed to leaving no physical trace of activities. They clean up after themselves and endeavor, whenever possible, to leave such places in a better state than when they were found.

Immediacy: Immediate experience is, in many ways, the most important touchstone of value in the Burning Man culture. Burning Man seeks to overcome barriers that stand between them and a recognition of our inner selves, the reality of those around you, participation in society and contact with a natural world exceeding human powers. No idea can substitute for this experience.