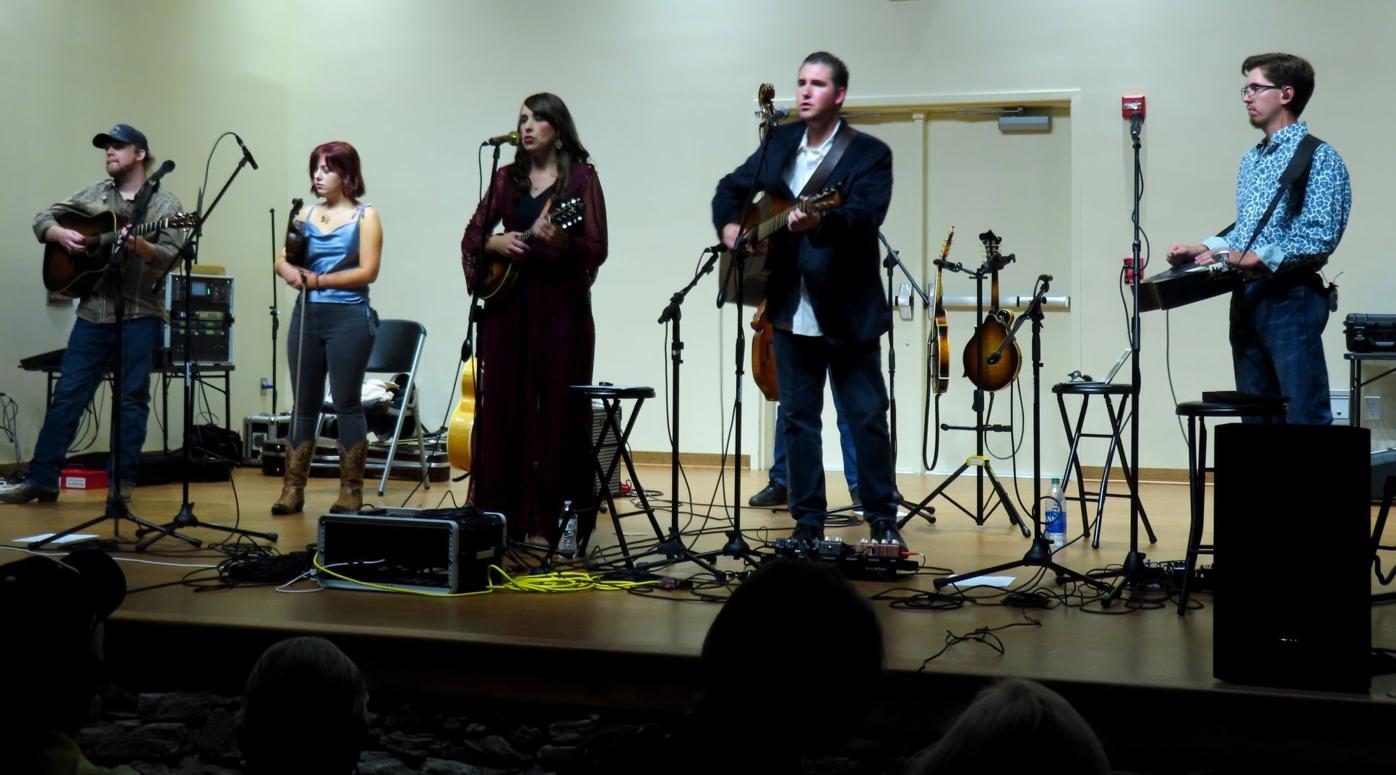 Darin and Brooke Aldridge, pictured center, along with performers Samantha and Zeb Snyder, Billy Gee and Jacob Metz, filled the Avery Community Center with dulcet bluegrass tones during a July 17 concert in Newland. 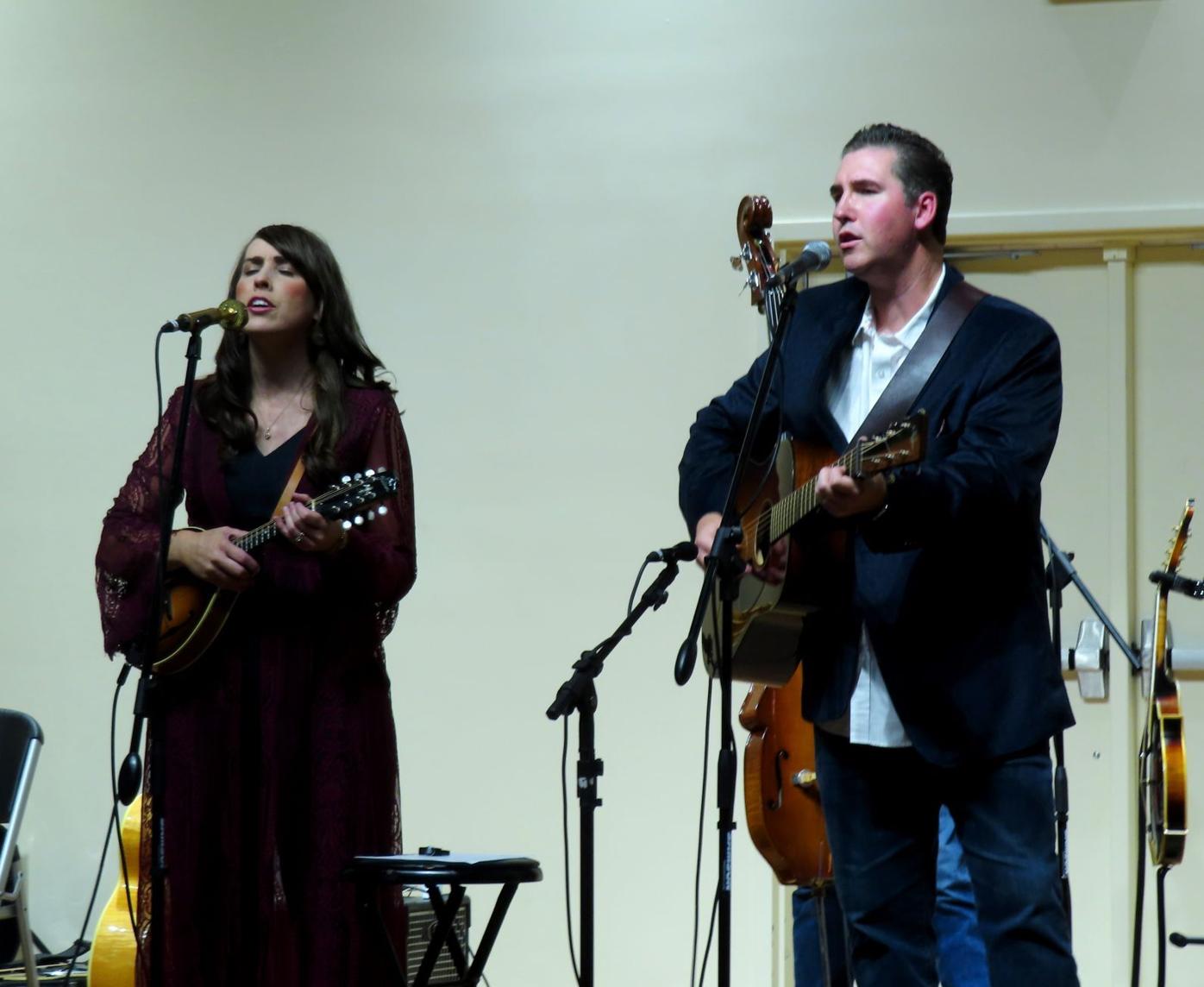 Award-winning bluegrass artists Darin and Brooke Aldridge brought their music home to Newland for a special performance at the Avery Community Center on Saturday, July 17.

The Avery Community Center was packed to capacity to see bluegrass duo Darin and Brooke Aldridge, along with Boone and Church, as well as several additional musical guests during a July 17 concert in Newland.

Darin and Brooke Aldridge, pictured center, along with performers Samantha and Zeb Snyder, Billy Gee and Jacob Metz, filled the Avery Community Center with dulcet bluegrass tones during a July 17 concert in Newland.

Award-winning bluegrass artists Darin and Brooke Aldridge brought their music home to Newland for a special performance at the Avery Community Center on Saturday, July 17.

The Avery Community Center was packed to capacity to see bluegrass duo Darin and Brooke Aldridge, along with Boone and Church, as well as several additional musical guests during a July 17 concert in Newland.

NEWLAND — It has been a challenging year for the music business, a trade that was particularly hit hard by the COVID-19 pandemic. Even during a normal year, however, it can be difficult to make it in the music industry and even harder to be appreciated in your hometown once you do find success elsewhere.

For the top bluegrass group Darin and Brooke Aldridge, it has been quite a ride in recent years. Brooke grew up in Avery County in the Spear and Plumtree area along the Toe River. Darin’s parents grew up in Crossnore before moving closer to Charlotte. Darin is a veteran of the bluegrass world, having played with top groups such as the Country Gentlemen and Acoustic Syndicate while Brooke entered many contests as a younger vocalist.

Once they met, fell in love and married, the duo set about charting their own course in the bluegrass world.

After a lot of hard work, Darin and Brooke Aldridge have found themselves in the upper tier of the bluegrass genre. Brooke is the reigning International Bluegrass Music Association (IBMA) Female Vocalist of the Year, her fourth win in a row in that highly competitive category. Darin was named the 2017 IBMA Mentor of the Year.

The couple is on the verge of releasing their brand new album on the upstart Billy Blue record label. Appropriately called The Life We’re Livin’, the recording drops on August 6.

On July 17, the Darin and Brooke Aldridge band performed a special homecoming concert in the Avery County Community Center in Newland. With the help of sponsors The Lodges at Eagles Nest, Spear Store, Three Nails Hardware and more, the band played in front of a full house of family, friends and lovers of bluegrass music.

As a special treat, the award-winning couple brought in guests Samantha Snyder on fiddle and Zeb Snyder on guitar, resonator guitar and mandolin for the show. The two siblings were once a part of the successful Lexington, NC-based band The Snyder Family. Zeb now plays for the all-star group Appalachian Road Show. Rounding out the band is longtime bass player Billy Gee and banjo picker Jacob Metz.

The duo Boone and Church offered a strong opening performance the concert, which was emceed by local radio host Philip Greene of 1130 WECR-AM.

As the show progressed, Darin and Brooke Aldridge had the chance to thank their families, friends and local mentors that helped them along the way when they were younger. At the top of the list are Brooke’s parents, Johnny and Kathy Justice, and Darin’s parents, Garry and Zillia Aldridge, all of whom were in attendance.

Brooke took time to give thanks to Robin Carver Austin, a mentor of hers who sadly died at 29 years of age in 1998 in an auto accident. Every year, Avery High School awards a student with the Robin Carver Austin Memorial Scholarship on her behalf.

“Robin Carver Austin was a teacher of mine and a coach and I know she has got family here tonight, too, and I always love doing this song ‘Sacred Lamb’ in her honor,” said Brooke Aldridge. “She would want me to do this song because of the message that it has in it. Every time I used to hear her sing it at the Easter Cantata that they used to do down in Bethel, the hair on my arms would just stand up because she could sing amazingly, and her family could sing amazing in their own right. I miss her every day and I think about her. She was somebody that you knew from the moment that you met her the first time, because she was so bubbly and happy all of the time. I always thought as a kid, ‘I want to be somebody like that. I want to be happy and bubbly and inspire people.’ So, she lives on through me in a lot of ways. The night that we debuted on the Grand Ole Opry, we did this song and her Mom and Dad were listening, and Luther and Phyllis both told me how special it was that we sang this song for her. I miss her every day and I’m thankful that she got to be a part of my life.”

To can keep up with Darin and Brooke Aldridge, click to www.darinandbrookealdreidge.com. They have many high-profile shows coming up, including playing on the Grand Ole Opry along with Marty Stuart and the Oak Ridge Boys on August 7, which can be heard at wsmonline.com or on 650 AM radio on a clear night.

On Sept. 11, the Aldridge duo will also do a show at the Bristol Rhythm and Roots festival in nearby Bristol, Tenn., and will perform in North Wilkesboro on Sept.17, when the MerleFest music festival returns after taking a year off.