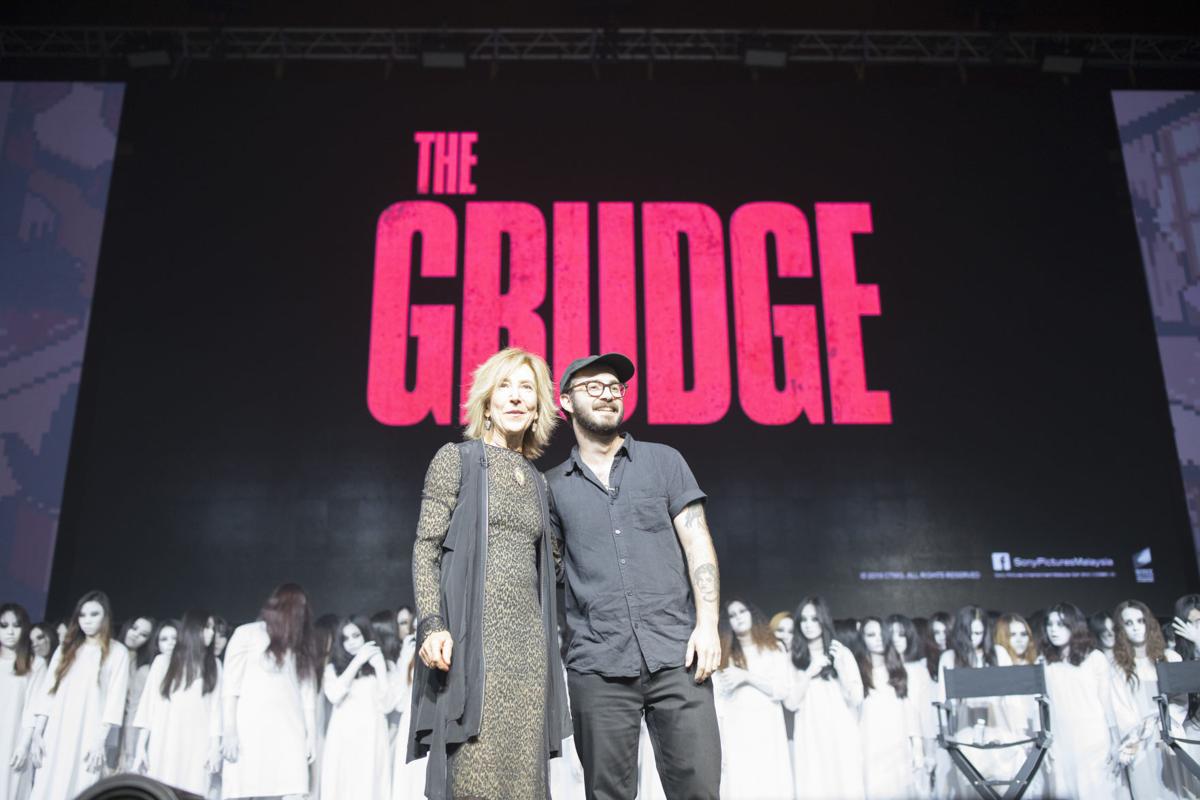 From left, Actress Lin Shaye and Director Nicolas Pesce participate in a panel during Comic Fiesta in support of the upcoming release of The Grudge on Saturday, Dec. 21, 2019. 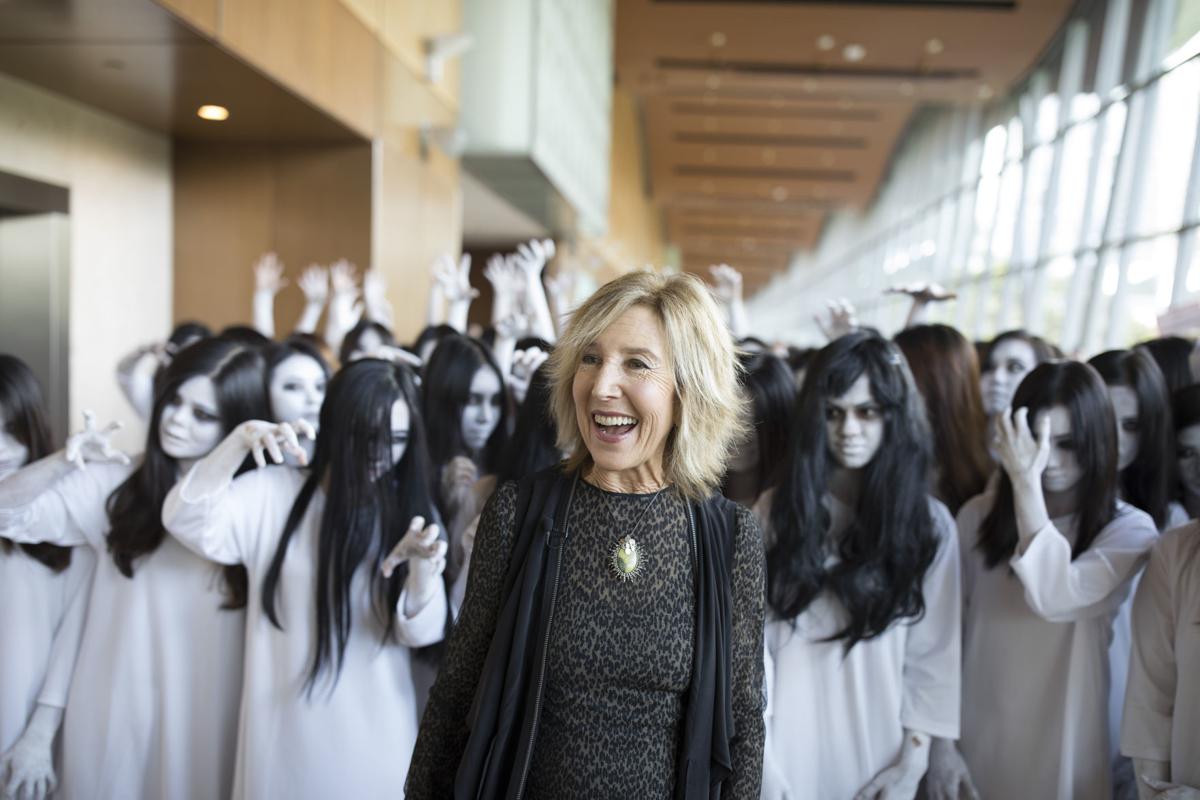 Actress Lin Shaye walks with Grudge girls in make up and costume after a panel during Comic Fiesta in support of the upcoming release of The Grudge.

From left, Actress Lin Shaye and Director Nicolas Pesce participate in a panel during Comic Fiesta in support of the upcoming release of The Grudge on Saturday, Dec. 21, 2019.

Actress Lin Shaye walks with Grudge girls in make up and costume after a panel during Comic Fiesta in support of the upcoming release of The Grudge.

If you’re a horror fan, you’ve probably seen “Ju-On: The Grudge,” a 2002 Japanese film written and directed by Takashi Shimizu.

This genre is known as J-Horror, noted for its focus on psychological fear, building tension and such supernatural elements as ghosts (yurei) and poltergeists.

“Ju-On” not only launched a spate of scary films in Japan, it spawned an American series also. Starting off in 2004 with “The Grudge,” there have been three films in the U.S. franchise.

Now there’s a new one, also titled “The Grudge.” It was meant to reboot the American series, starting fresh. But it wound up being a “sidesequel,” taking place concurrently with the events of the three other films.

Thus, in effect, this is the fourth film in Hollywood’s “The Grudge” franchise.

Here, a supernatural curse created by the violent murder of a housewife in Japan goes abroad. A nurse (Tara Westwood) returns to a small town in Pennsylvania after seeing a couple of ghosts in Tokyo. Little does she know she’s carrying the virus-like curse of the Grudge. Going mad, she kills her family.

The detectives investing the murders (Demián Bichir Nájera and William Sadler) also are touched by the curse; as are the real estate agents (John Cho and Betty Gilpin) who are trying to sell the house where the murders took place. So are the new owners of the property (Frankie Falson and Lin Shaye).

No, it doesn’t stop there. A rookie detective and her son (Andrea Riseborough and John J. Hansen) find themselves infected by the curse when they move to the town.

No spoiler alerts needed; you know a horror film is not going to turn out well for the people in it. That’s what makes it a horror film.

“The Grudge” is still scaring audiences at the Marquee Cinemas in Morganton and the Abingdon Cinema in Abingdon, Va., both of which are about an hour away from Boone. Almost like passing the curse along to you.

Being that this is a J-Horror film, the plot is not linear. It’s as though director Nicolas Pesce put his self-scribed story into a blender and turned it to high.

“That’s something baked into every ‘Grudge’ movie,” says Pesce. “It’s always multiple storylines. The franchise itself is an anthology, but even within each movie it’s an anthology. The nature of the curse is that it spreads to everyone who touches this house, so you have so many stories of people who’ve just interacted with this thing.”

Pesce’s 2016 debut, “The Eyes of My Mother,” scared audiences with its horrifying premise and esoteric construction. His 2018 follow-up, “Piercing,” was in some ways even weirder, what’s been called “a kinky marriage of Italian giallo to Japanese horror.”

For this new version of “The Grudge” Pesce teamed up with producer Sam Rami of Ghost House Productions. Not only has Rami given us such films as “Evil Dead” and “Spider-Man,” he also produced that 2004 U.S. edition of “The Grudge.” Turns out, Rami had been searching for a new director “whose vision could reimagine the franchise for modern audiences.”

He picked the right man.

Pesce agreed. “There was just no way I was going to make an easy, fun ‘Grudge’ movie,” he said. “It was always going to be this intense, brutalist sort-of nightmare.”

That pretty well describes it — although Pesce rejects the J-Horror attribution.

“J-Horror had such a splash in America in the early 2000s … a lot of the imagery and stylistic notions have been spoofed so many times that they’ve become a different thing. … There are 12 ‘Grudge’ movies out there. If you like J-Horror, go watch one of them.”

As for this new take?

“I wanted to take all the folklore from my town growing up, stories and rumors, and put a Grudge-y spin on it ... What resulted was this really charming, super realistic ghost story.”