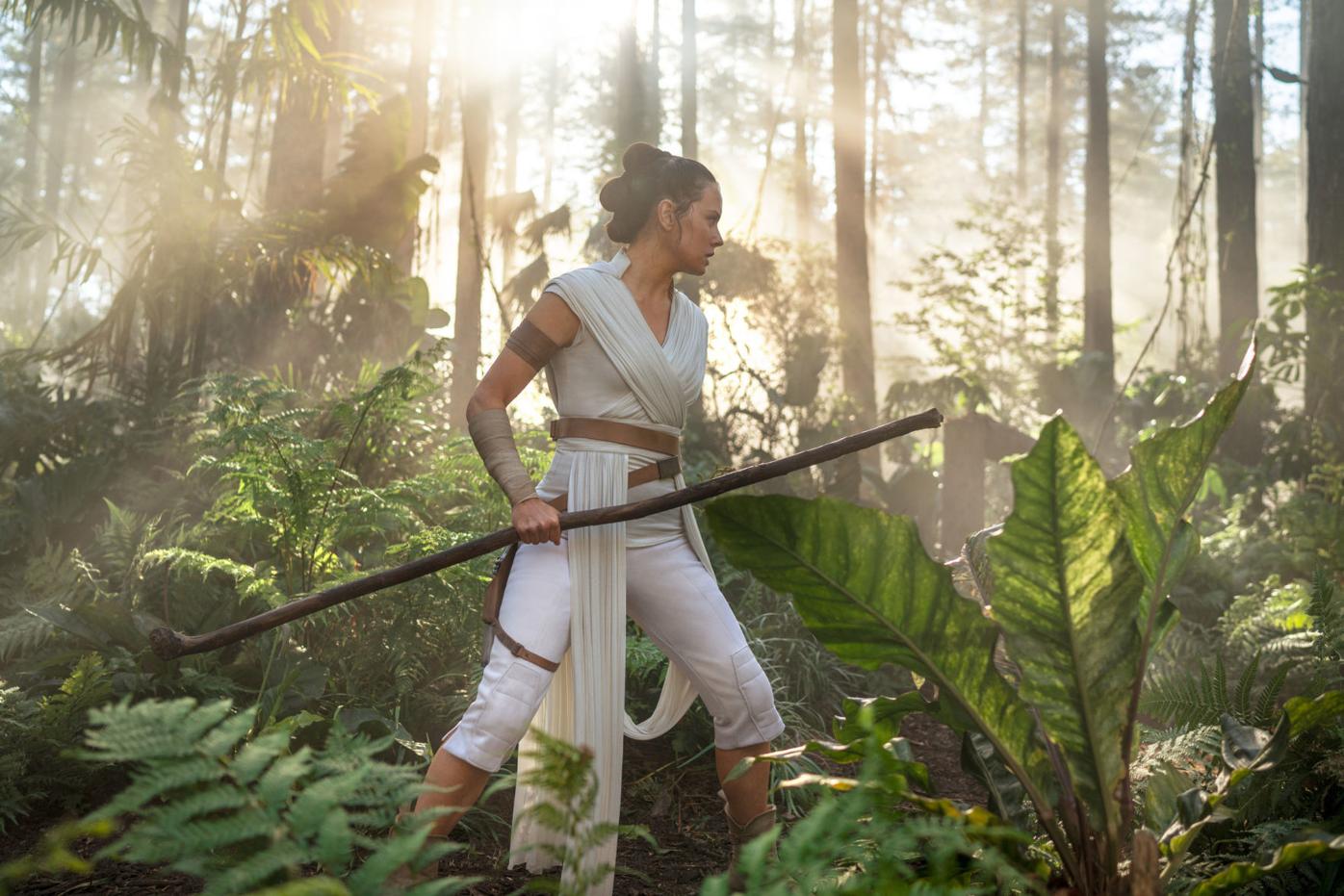 Daisy Ridley as Rey in a scene from 'Star Wars: The Rise of Skywalker.'

Daisy Ridley as Rey, left, and Adam Driver as Kylo Ren from 'Star Wars: The Rise of Skywalker,' which is now in theaters.

From left, Joonas Suotamo as Chewbacca, Oscar Isaac as Poe Dameron, Daisy Ridley as Rey and John Boyega as Finn in a scene from 'Star Wars: The Rise of Skywalker,' which premieres in theaters on Dec. 12.

Daisy Ridley as Rey in a scene from 'Star Wars: The Rise of Skywalker.'

Daisy Ridley as Rey, left, and Adam Driver as Kylo Ren from 'Star Wars: The Rise of Skywalker,' which is now in theaters.

From left, Joonas Suotamo as Chewbacca, Oscar Isaac as Poe Dameron, Daisy Ridley as Rey and John Boyega as Finn in a scene from 'Star Wars: The Rise of Skywalker,' which premieres in theaters on Dec. 12.

George Lucas imagined a galaxy far, far away where a heroic Rebel Alliance used lightsabers and a power known as The Force to do battle with an evil Galactic Empire.

During Lucas’s scrambled order of storytelling (the first “Star Wars” movie was actually Episode IV), we have learned that Darth Vader was Luke’s father, Hans and Leia are Kylo’s parents, Kylo is Luke’s nephew, and Rey has become the last known Jedi. (Side comment: This may sound confusing, but Star Wars fans do manage to keep it straight.)

To date, this epic space opera’s story has stretched over nine episodes, as well as several anthology films. Somewhere in there Lucas sold the franchise to Disney.

This latest episode is called “Star Wars: The Rise of Skywalker.” Along with “Star Wars: The Force Awakens” and “Star Wars: The Last Jedi,” it forms a sequel trilogy, the final three films in what has been collectively referred to as the Skywalker Saga. In this ninth film, the ancient conflict between the Jedi and the Sith comes to a definite close.

Does that mean there will be no more Star War movies? Of course, not. There’s too much money involved here. After all, Disney paid more than $4 billion for Lucasfilm.

“In the flow of titles, this movie had a very weird responsibility,” notes J.J. Abrams (returning to the series after last directing “Episode VII — The Force Awakens”). “It had to be the end of not just three movies, but nine movies. We had to look at, ‘what is the bigger story?’ ”

So how did they manage to tie it up in a bow? “We had conversations amongst ourselves,” he says. “And, also, we met with George Lucas before writing the script.”

“Star Wars: The Rise of Skywalker” is currently waving its lightsabers at Regal Cinema in Boone, Two Rivers Cinema in Wilkesboro, Golden Ticket Cinemas Twin in Lenoir and Liberty Theatre in North Wilkesboro.

What can you expect to see in this capstone film in the Skywalker Saga? Leia Organa returns to the story (Carrie Fisher, who died in late 2016, will appear through the use of unreleased footage from “The Force Awakens” and “The Last Jedi”). Hans Solo (Harrison Ford) is gone. And maybe you’ll learn more about the orphan Rey’s origin.

This ninth outing is being produced by Lucasfilm and Abrams’s production company Bad Robot Productions. It will be distributed by Walt Disney Studios.