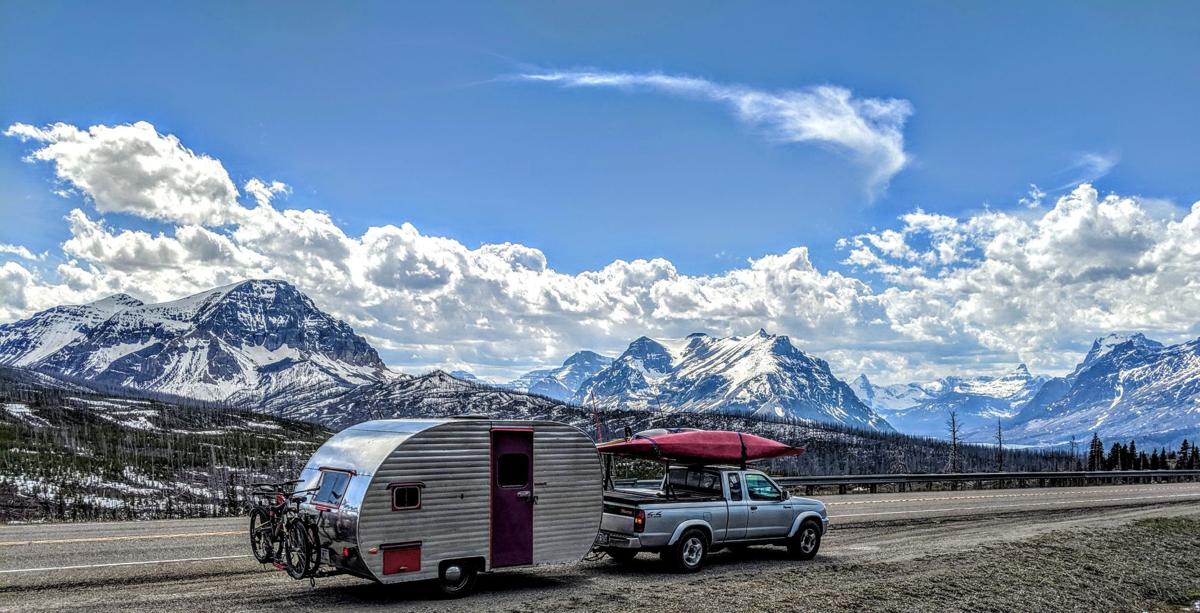 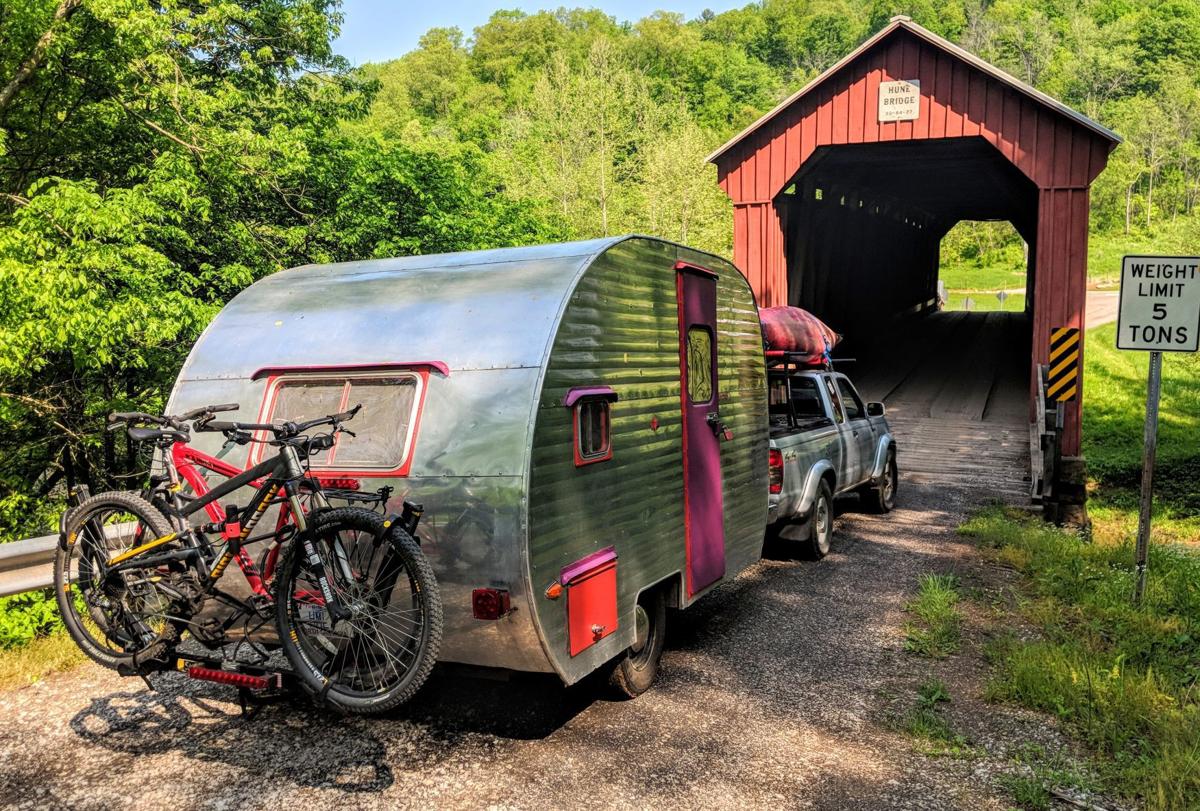 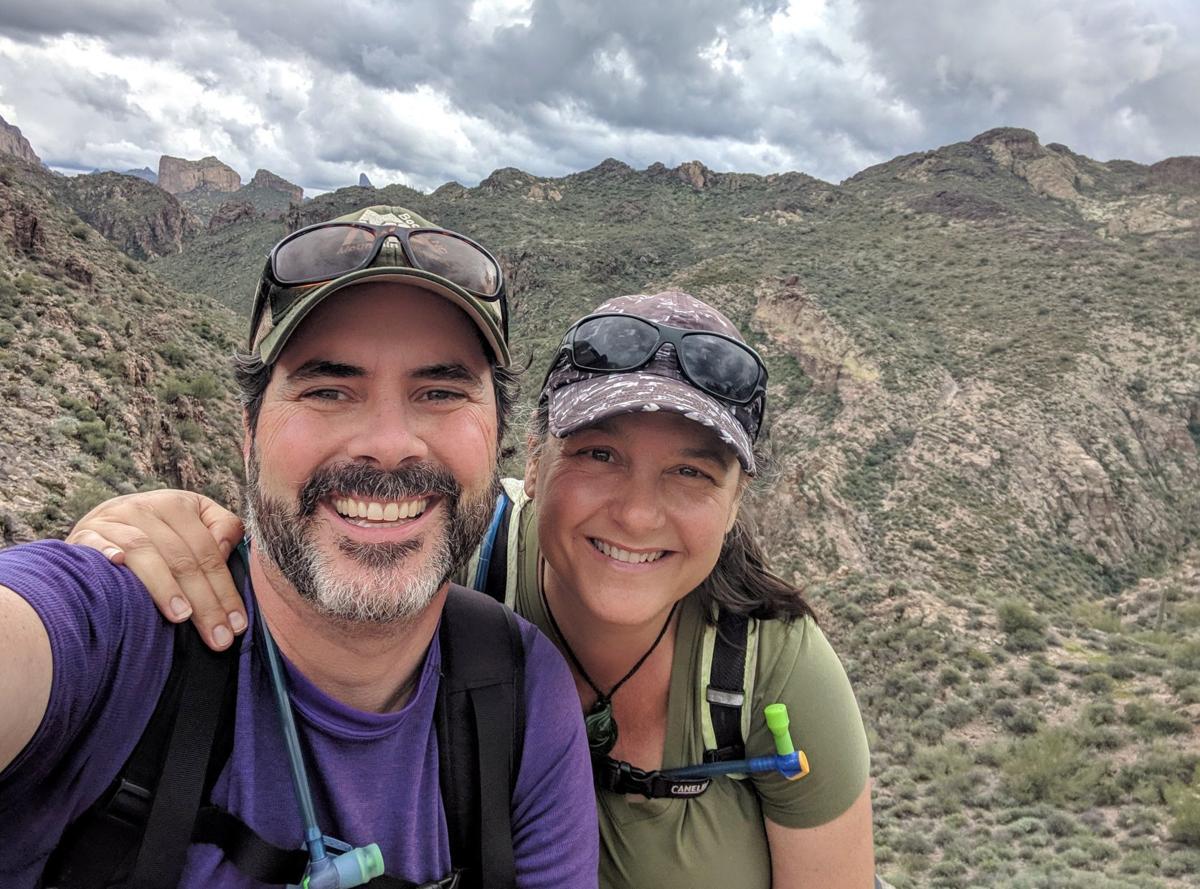 David Hutchison and Shari Galiardi travel the country and share their adventures with the world through a platform they’ve created titled ‘Freedom in a Can.’

David Hutchison and Shari Galiardi travel the country and share their adventures with the world through a platform they’ve created titled ‘Freedom in a Can.’

The academic careers of Appalachian State University professors David Hutchison and Shari Galiardi were on track. Hutchison was the University Recreation – Outdoor Programs Coordinator and Galiardi was Director of Service Learning, and their future was set out before them. Then, when they chose to be spontaneous concerning imagined and oft-threatened intentions, both career paths came to an abrupt halt.

On impulse, Hutchison and Galiardi decided to turn their backs on their steady employment, sell their house and travel the countryside in a 1957 SportCraft teardrop camper.

Their journey began in Oxford, Ohio, a unique Heartland settlement incorporated in 1830, surrounded by what was left of the Buckeye State’s once-plentiful prairie grasses. Hutchison grew up as a Midwesterner in the central Michigan town of Alma while Galiardi was raised in sunny Southern California. Separately, both of them decided to look for a place to go to graduate school, and fate brought them to Miami University, tucked away on the Indiana border. Soon, they met and were married.

Now an official couple, the newlywed graduates sought out a university where they could both find work and App State soon came up on their radar. Together, Hutchison and Galiardi built a life here in Boone from 1999 to 2012. Then, the call of the open road, combined with the stressful life of academia, led them to make a dramatic decision.

Back when they were kids, both Hutchison and Galiardi came to appreciate the big outdoors in different ways.

“My parents drove us pretty much everywhere,” said Hutchison. “One year, when I was 8 years old, my parents converted this van into a little camper and myself and my three siblings and my parents drove all of the way across the country. On this road trip, we camped and slept outside of the van in tents, and we went to Rocky Mountain National Park, we went to Nevada and California and hit Yosemite and Sequoia and then went up the Pacific Coast. My whole mind changed when I saw the mountains for the first time as a little kid. The concept of road tripping and camping and being outside appealed to me, and I loved it.”

“For me, for my parents to travel no more than two to three hours away from home was a big deal,” said Galiardi. “But, I did a lot of camping with my friends and while in the Girl Scouts. In Santa Barbara, we did a lot of camping in a place called Lake Cachuma and in and around the nearby mountains. So, I grew up comfortable with camping and being outside. I really got my travel bug, however, when I was with a gymnastics team and we got the opportunity to do an exchange with a group of gymnasts from Honolulu. I went to Hawaii for two weeks, and it blew my mind. We didn’t have a lot of money when I was growing up, but that trip put it in the back of my mind that I wanted to see the world some day.”

Fast forward many years in the future to Boone and Appalachian State University. An idea collectively enters the minds of Hutchison and Galiardi and soon there came a sign.

“We were at the point of our lives when we knew change was imminent and I tossed the idea out to Hutch of quitting our jobs and buying a camper and traveling the country and even joining the Peace Corps,” said Galiardi. “He loved the idea but wasn’t sure if he was ready to do it. Then, about three months later, I had that day at work that pushed me into a decision about my life. We had been poking around on eBay, looking at vintage campers and I found the one that we currently live in for $900 in Michigan.”

You do not find a $900 dollar 1957 SportCraft camper that does not need a lot of work, and that was true in this case. So, they took the time to fix it up while deciding to modernize it with innovative solar panels designed and made by a company called Renogy.

Now, not only are they sponsored by Renogy and the campground search page The Dyrt, they are also sponsored by an inventive ‘sustainability in engineering’ company based in Boone called IonCon.

Over a decade into their travels, Hutchison and Galiardi swear that on all the trips made with the camper, they have never ducked out for a hotel room. They have stayed true to the road and have learned to make a living by giving workshops all over the country on camping, camping life and cooking good food while doing so.

Now, they are Renogy Solar Ambassadors, environmental educators, nature and wildlife photographers and public speakers. In fact, they were due to give several seminars and workshops in Boone before COVID-19 put a halt to all gatherings.

So, they continue to travel and head down every back road they come across that looks interesting. You can keep up with their journey and their projects on their website at www.freedominacan.com and at www.facebook.com/freedom.in.a.can/.

“Hamlet, our vintage camper, is a conversation starter everywhere we go,” said Galiardi. “People have chased us down, literally, which is really fun. One time in Cleveland, Ohio, we were parked in the back of a Trader Joe’s parking lot and a guy starts yelling loudly from the other end of the parking lot saying, ‘Hey, are you leaving now? Don’t leave. Don’t leave. I saw you parked in my neighborhood. I have to know more.’ So, he got a tour of the camper. But sometimes, we will also leave our camper behind at a visitor’s center or at a friend’s house and then kayak and bike or hike way out into the wilderness for a week to three weeks at a time. So, we also use this camper as a base camp to get even farther out.”