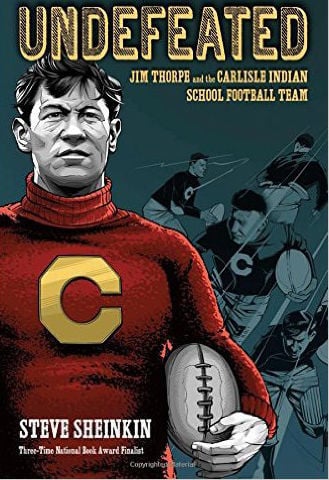 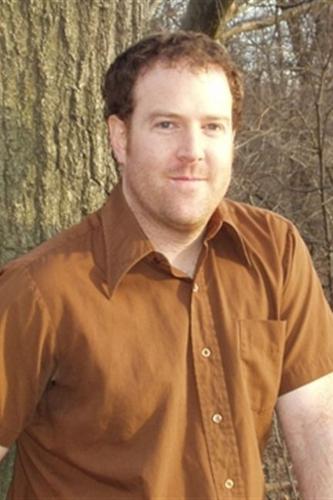 Steve Sheinkin has the rare storyteller’s gift of crossing between young readers and adults — and luring them both into his stories. Much of the reason behind that ability is that Sheikin’s novels are often based on little known, but captivating periods of history ripe with action and intrigue.

Such is the case with “Undefeated: Jim Thorpe and the Carlisle Indian School Football Team” (Roaring Brook Press). In this novel, Sheinkin, a three-time National Book Award finalist, not only tells the tale of the man some consider the greatest athlete in American history, but also the story of the brutal, early days of football, the schools to which many young Native Americans were sent to assimilate into white culture and — as the author doesn’t forget to mention in an interview with Mountain Times — Thorpe’s summer connection to Rocky Mount.

The following interview has been edited for clarity and length.

Tom: Before they discover “Undefeated,” it’s likely that few young readers will be familiar with 1912 Olympian and football great Jim Thorpe or the Carlisle Indian School. What is it about Jim’s story that will attract modern readers?

Steve: To me it’s the best underdog sports story that I’ve ever heard, and to me that’s timeless. An underdog sports story can be so inspiring. It doesn’t matter if you care about the sport, care or know anything about the background. And, once you know Jim and what he’s up against, and the hardships he faced as a kid, at that point it doesn’t matter if you have the background information or not. It just becomes this great, all-inspiring story.

Tom: Multiple storylines run through the novel, including major character studies of Thorpe and others such as Pop Warner and Richard Henry Pratt, the origin of football and the story of the Carlisle Indian School football team. Where does the story start for you?

Steve: For me, it starts with Jim Thorpe. I put him at the heart of the story. That’s why I started with him, literally on the first page, having him walk onto the field to try and play football. In order to tell the whole story, I had to step back in time, to even before he was born. His incredible rise is the heart of the book.

Tom: What was the research like for “Undefeated?” It appears meticulous.

Steve: It was, but I find that really fun, even more than the writing actually. The research for this was a lot of newspapers. That’s where you get the writing. There was no radio, no TV obviously, no film, even, of these games. To recreate the games, which is the real key of the book — what I’d want to read if I were a 12-year-old boy: Let’s get to the game! — I used newspapers almost exclusively. Some of the guys I interviewed later talked about famous events, but, you know, Pop Warner would talk about a game 30 years later and get it totally wrong. So, you had to be wary of that. The sports writing, those eyewitness accounts, that was by far the best material I found.

Tom: Not to bring up a sore subject … but, can we credit your time writing history text books for the excellent source notes and index found in this novel?

Steve: Yes! And it’s not really sore anymore, but, you’re right, I wrote textbooks for years and they always needed two sources for everything because everyone was always so worried about getting caught making a mistake. There couldn’t be a better training ground.

Tom: On your blog, you note that you often have to delete details and scenes in writing your novels. What in particular did you have to leave out of “Undefeated” that you wish hadn’t had to?

Steve: It comes back to the timeline issue and the stories that happened before Jim Thorpe got to Carlisle. Before he joined the team in 1907, I didn’t want that to be any later than halfway through the book, structurally. So, there were all these stories before then I didn’t use just because it would make the book too long. It’s really just that, but that was so painful. The stories on their own were so great, and the team went on these adventures and had interesting games before Jim got there. I feature some of that, but it was painful.

Tom: One of the most surprising elements of the novel you do include was how violent the game of football was in it early days. By comparison, the game seems almost tame today. Did this origin history surprise you?

Steve: It was very surprising, and I’m a football fan. I’m concerned about the safety of the game now. It’s a big issue we haven’t resolved. But, to look back at it then, it was much worse. And, the game was teetering (because of the violence). It could have been easily abolished, and you could argue that it should have been because kids were dying playing this game and it wasn’t worth that. I was shocked. I had no idea it was like that.

Tom: An important theme of the novel are the topics of stereotypes and racism experienced by Thorpe and others in the school and in society at large. Sometimes this came at the hands of those seemingly meaning to do good. You briefly touch on modern team names. …

Steve: That’s something that most kids I’ve talked to have never thought about. They’re used to hearing the Redskins, the Braves and so on. They don’t think about it at all, so I at least wanted them to think about it, without me telling them what to think. That’s another one of those tricky ones.

Tom: Where do we stand as a society today regarding these issues? You pose the question in the epilogue, but leave it open-ended.

Steve: I think we should just change it and get it over with. I quote one guy saying that, and it was sort of my way of getting it in there. If it’s not a term you would use in a polite conversation, you shouldn’t be using it as a name of a team.

Tom: You’re referring the quote, “I’m not your mascot?”

Steve: Yes. There’s no other example for a team: If you switched the phrase for Hispanics or Jews, it would be so outrageous, and yet, somehow we don’t quite see it when it’s Native Americans.

Tom: Other strong themes of the novel are honor and undeserved loyalty, and I’m thinking here of the relationship between Thorpe and Warner after the Olympic scandal. It’s amazing that Thorpe could be so forgiving. What do you hope readers will take away from their relationship?

Steve: It was amazing, and Jim Thorpe was an amazing guy. The man absorbed a lot of pain, and terrible blows in his life. Their relationship was the most important thing in the book. The two of them, if you boil it down, it’s about them. What they brought to the sport, individually and together. Even though it was a hundred years ago, I’m just really disappointed, every time I read it, that Pop didn’t stand up for Jim at that key moment. … I don’t think Jim ever really forgave him. He didn’t make an issue of it — he wasn’t the kind of guy to ever say anything in public, or even in private, according to his family. But they also say he never really got over that betrayal.

Tom: Your novels are always a surprise. You’ve taken us from a German laboratory in 1938 to the little known story of a group of young African American sailors during World War II. What’s next?

Steve: It’s a good time to ask that. I’m pretty much narrowing down what I want to do next. It’s going to be another little known story, of the early days of aviation and women pilots. Everyone knows about Amelia Earhart, but what I didn’t know is that there was this whole community — although it was small — of women pilots in the early days. I want to write a story about them that will center on a cross country race — the Women’s Air Derby of 1929. It was a really interesting time in history. The summer after the Roaring ‘20s and right before the stock market crash. But, there’s this 10-day country race among the best women pilots. There were 19 all together and each one has a really interesting story — how they got there, how they overcame people telling them they couldn’t do this, this was just for men. They were all young, in their 20s, and not unlike the football story, this was incredibly dangerous. More dangerous at this time than football, because these planes were just so unreliable. So, the story is full of action, events and danger. And, it’s got that built-in excitement of a race. As you pick the story and characters, you’ll pick someone to root for. It’s got that sports book kind of feel. It’s what I like to do, mixing an exciting story with a chunk of history that young readers won’t know too much about.

Tom: Steve, thank you for your time today. There’s just one more thing I want to touch on.

Steve: There is a North Carolina connection to “Undefeated!”

Tom: When Jim spent the spring and summer of 1909 playing minor league baseball for the Rocky Mount Railroaders. …

Steve: Yes. Jim loved it, although it turned out being a bitter memory in the way if affected his life. But, he described that as being a really fun time, going there in the summer and playing in that (Eastern Carolina) league.