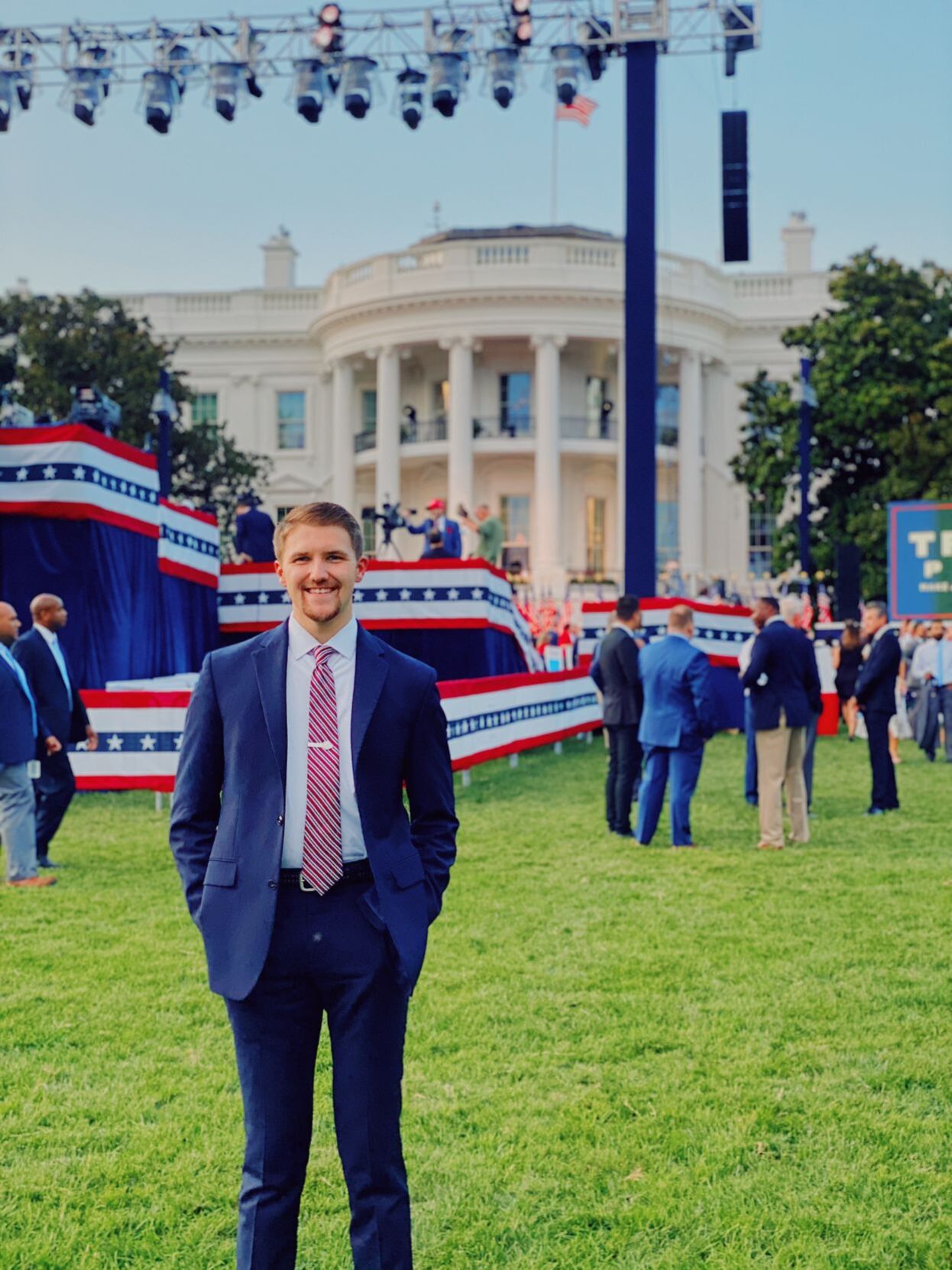 Dawson Buchanan poses during an event at the White House. 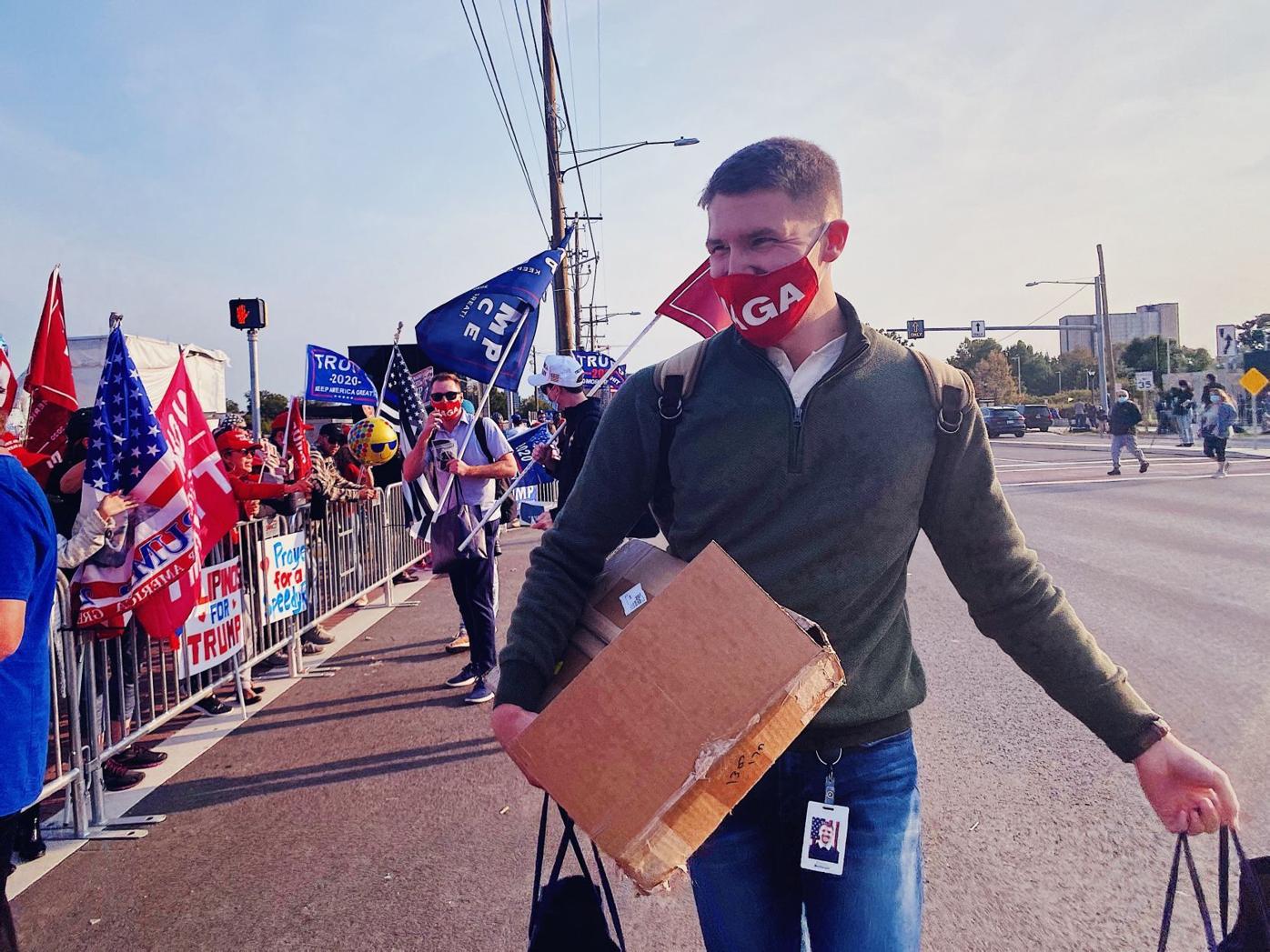 Dawson Buchanan poses during an event at the White House.

CROSSNORE — In the midst of one of the most heated election seasons in recent memory, Avery County native Dawson Buchanan found himself right in the middle of the political fervor. As a part of President Donald Trump’s re-election campaign team, Buchanan played a vital role in conducting and coordinating many of the President’s rallies, thus helping the “Trump Train” roll into cities across the country.

Buchanan began working for the campaign in the Fall of 2019, and found himself fulfilling the role as contract coordinator. Dawson found his role to be a “rewarding” experience, yet simultaneously grueling, to say the least. Phone calls with event venues preceded many sleepless nights due to the constant planning and organizing required for these events, which would often draw tens of thousands of people in to see the President speak. More often than not, the campaign team would be organizing up to 10 events at a time.

“Yes, you got a phone call at three that morning. No, you didn’t sleep at night. You haven’t ate probably since last night’s dinner, and it’s 10 o’clock the next day. You’re completely fatigued from overworking yourself, but then, when you see 39,000 people show up, that’s when you know it was worth it,” Buchanan said.

Buchanan was born and raised in the Pyatte community and attended Crossnore Elementary, Avery Middle and Avery High School before going on to earn a degree in International Relations from Liberty University. During his senior year, Buchanan landed a job at the office of Congressman Kevin McCarthy and moved to Washington D.C.

It did not take Buchanan long to get involved with the President’s re-election efforts. He initially joined Trump Victory, the field team component of the President’s campaign, and began working for the campaign’s headquarters in January of this year.

“Originally, I was hired as a contract and travel coordinator. So I was the one that did all the contracts for the president, vice president and all the family events. Whether that was a venue search or handling the operations of the finance team, that was another thing that I did, of course in conjunction with a lot of other people,” Buchanan said.

Just as the president was ramping up his re-election efforts, COVID-19 hit, making the possibility of large gatherings virtualy impossible at the time. It was not until June 30 when the campaign would get rolling with its first major event in Tulsa, Oklahoma. From that point on, the work was non-stop in the sprint to the election finish line.

“I remember at one point, we had 220 events in one week. It got to the point where eventually I ended up being the manager of the team. So I was the point person for all contracts, invoices and finances. I was also the intern coordinator for the campaign,” Buchanan said. “The funny thing about campaigns is that whenever you join, what your job title is usually ends up being very different from what you end up doing.”

Buchanan says that he has been a supporter of the president’s since the day he descended the escalator in Trump Tower in 2015. However, he likely never expected that one day he would end up working for him. While Buchanan said that he did not have that much direct interaction with the president, he worked for a team that included campaign managers Brad Parscale and Bill Stepien, as well as Donald Trump Jr., Lara Trump, Ivanka Trump, Eric Trump and the office of the vice president.

“I remember one day, the president had a call with the entire campaign and we were all listening in and he was talking about the rallies and he said, ‘It’s amazing how gifted your team is, because it’s like all I have to do is press a button and we have a rally,’” Buchanan said. “So in times like that, it was very rewarding to hear the president say that he appreciates our work.”

During the Trump years, Buchanan became just one of many Western North Carolinians who has become involved with national affairs, with the most notable of that group being White House Chief of Staff Mark Meadows and recent Congressman-elect Madison Cawthorn, who became the youngest person voted to Congress in the modern era.

Buchanan credits his background and the culture he grew up in for providing him the moral guidance needed to take advantage of the opportunities that came his way later in life.

“I think it stems from our Christian roots. People can say what they want about small towns and their religions, but I think that’s what has driven this county and western North Carolina to such success is the strong, deep rooted Christianity and the people of faith. I know that I would not be here without my faith. I would not be here if God had not led me to do what I am doing,” Buchanan said.

It goes without saying that Buchanan was disappointed with the results of the election, as anyone would whose hard work and effort does not ultimately pay off in the end. Nevertheless, Buchanan speaks of his time with the campaign with a sense of pride and fondness for being a part of something that historians will one day look back on. After all, while Buchanan will return to the field of international relations for the foreseeable future, he believes that Trump, and the change that occurred in American politics, is not going away anytime soon.

“I think President Trump is not going to go anywhere for a long time. He’s not the kind to just be like Obama and go to his home in Martha’s Vineyard and never come out. I do think you’re seeing a surge, especially among the younger generation of Republicans, of an America-first public agenda that’s starting to roll out. I think new candidates are going to ride on the President’s coattails for a little longer, at least until midterms. Those coattails will then probably start to dissolve until President Trump, or someone from the Trump family, comes back on the stage,” Buchanan said. “I don’t think he’s going anywhere.”