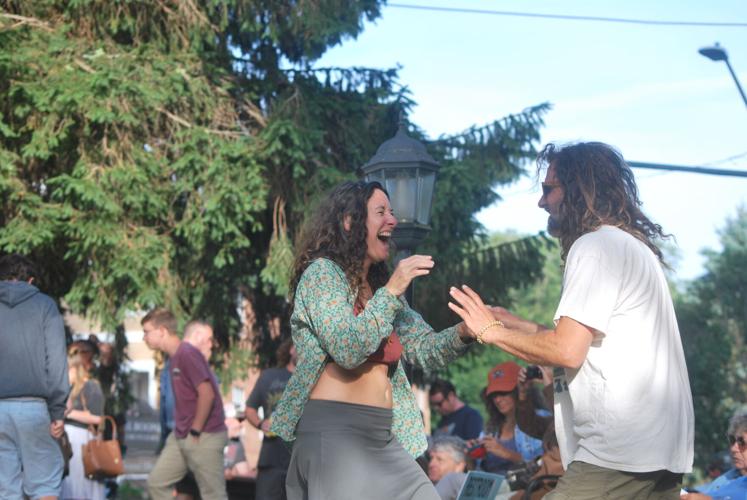 AnnaLisa Hadnavny and Andre Pierre Rowland danced to the bluegrass music played by Wiseapple at Boonerang on June 17. 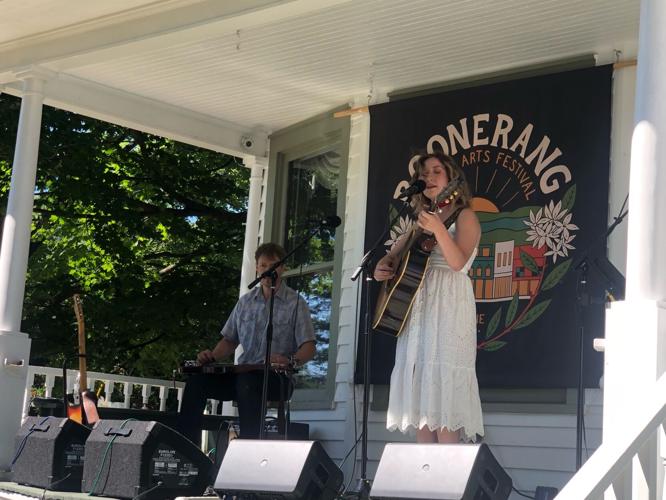 Alexa Rose performed at the Jones House stage on June 18 during Boonerang.

AnnaLisa Hadnavny and Andre Pierre Rowland danced to the bluegrass music played by Wiseapple at Boonerang on June 17.

Alexa Rose performed at the Jones House stage on June 18 during Boonerang.

BOONE — The streets of downtown Boone were transformed on June 17 and June 18 when thousands of people descended on the town for the Boonerang Music and Arts Festival.

Boonerang Founder and Director and Town of Boone Cultural Resources Director Mark Freed said an estimated 6,000 people attended the festival, with more than 4,000 ID checks taking place — which did not include artists, vendors, staff, children and non-drinkers.

Freed said there was a lot of unknown factors entering the inaugural festival and he questioned if there would be enough space for stages, cars and people. He said that with the hard work of everyone involved, the festival “came together pretty much as planned.”

“The inaugural Boonerang Music & Arts Festival was a resounding success. Our community came together in every way from the staff and presenting partners to the amazing volunteer crew. From the production companies, artists and organizations and of course to all of the people for showing up and having a great time.... and the beautiful mountain weather didn’t hurt,” said Freed. “It was so much fun to see our friends, families, and visitors smiling, dancing, making and engaging with art, and celebrating all things Boone. I overheard many people saying things like, ‘We have been waiting for something like this to happen in Boone for years.’ And the consensus of the masses is ‘more’. We will Boonerang back next year, for sure.”

Freed said the festival came to fruition after he began a list with several other community music lovers and producers of bands with connections to Boone. He said when Luke Combs performed at Appalachian State University in September of 2021 he started to think about how many musicians are tied to the High Country.

“We were thinking, ‘wow, we really have some big artists with some roots here.’ Luke Combs, Eric Church, Old Crow Medicine Show, Derek Trucks, Widespread Panic... we wrote them out and it was like, ‘wow, that’s quite a list, what if we did something with this?’” said Freed. “We finally decided to bite the bullet about six months ago. We started lining up bands and production companies, stages and tents and all those sorts of things and then we hit the street with it looking for support and it’s been overwhelming.”

Freed said the community response has been “enthusiastic” and that their team was privileged to work in Boone when planning an event like this one.

“Just the awesome support from all these organizations and dozens of volunteers, it’s just really heartwarming,” said Freed. “The response from the community has been hugely enthusiastic and the energy and the vibe we got from people is so exciting.”

“On the year that we recognize Boone’s 150 birthday, 75 years of Horn in the West, Pride month, and at long last Juneteenth; so much to celebrate,” Futrelle said. “It was just amazing to see how our town, sponsors and wealth of great Boone talent came together to make this all happen. All the credit goes to our Director of Cultural Resources Mark Freed and his team and all the great volunteers. Discussion has already begun on Boonerang 2023, so stay tuned.”

“My favorite parts were seeing so many smiling faces; rocking out with the Naked Gods and Melissa Reaves; seeing the throngs of people up South Depot; hearing about independent artists making their rent by having a successful festival; talking to volunteers who had as much fun working as playing and watching and participating in the silent disco,” said Freed.

Free said that mid-June was chosen for the free festival weekend to maximize the focus on Boone locals enjoyment.

“We specifically chose this time of year for a couple of reasons. For one, the university is gone. As much as we love the university and the students and having them as an important park of the fabric of our community, for those of us who live here year round, we know that there’s also just a great sigh of congestion relief when the students leave for the summer,” said Freed. “It’s also the time of year we heaven’t quite hit our full tourist stride of July... there are still hotel rooms and Airbnbs available.”

Freed said the term “boonerang” has been used in local vernacular for many years as an endearing term for people who spend time in Boone, leave and then come back, which some people do several times. He said he wanted the festival to be a “homecoming” for boonerangs.

“It’s one of the best times to be in the High Country and we kind of think of it as a community homecoming, a time that you can welcome your friends, your family, invite people back to Boone to come and enjoy the High Country in its glory and come out and have a great time,” said Freed. “It’s a very Boone-centric thing. It’s all things Boone and we all love our town so this is a good excuse for us to just come out together and celebrate.”

Boonerang kicked off on Friday, June 17 with a special performance on the Jones House porch as part of their summer concert series. Members from Urban Soil, Wiseapple and Lazybirds performed in the sunshine following a torrential downpour, which Urban Soils member Sarah Reinke said was “perfect Boone weather.”

Wiseapple banjo player Brian Swenk was the media director of the festival and coordinated media outlets and photographers. He said he was excited to play with his old band mates and celebrate Boone.

“We got together in the late 90s and we are just like brothers at this point,” said Swenk. “We played around the Southeast for six or seven years and love doing reunion shows in the place we started.”

Saturday saw more bands and streets close down to accommodate the stages set up on North and South Depot streets.

The South Depot Stage saw bands like Soul Benefactor featuring the Junaluska Gospel Choir and Chalwa perform during the day while headliners Town Mountain and Acoustic Syndicate played their sets that evening. South Depot Street was covered with people dancing and watching the bands perform.

On the North Depot Stage, the King Bees, Naked Gods and Melissa Reaves were jamming for hundreds of festival goers dancing along.

Zach Smith, bass player for Town Mountain, is from Boone. He said coming back to play at Boonerang felt “full circle.”

“I have a lot of pride for where I grew up because this place is so special,” Smith said.

He said to play a free event for the community while also giving back was important to him.

“I feel the same today as I did when I like played Merle Fest for the first time,” Smith said.

He said pulling in to Boonerang was like seeing something out of a movie, seeing bands like Soul Benefactor and the Junaluska Choir performing on South Depot Street. He also saw people he said he kind of grew up with like Tray Wellington. Smith said he and Wellington would jam together at Murphy’s “back in the day” during the Wednesday night bluegrass jams.

Before he went on stage with Town Mountain, Smith said he had felt like he had lost his voice because he had hugged and talked to so many people he hadn’t seen in a while.