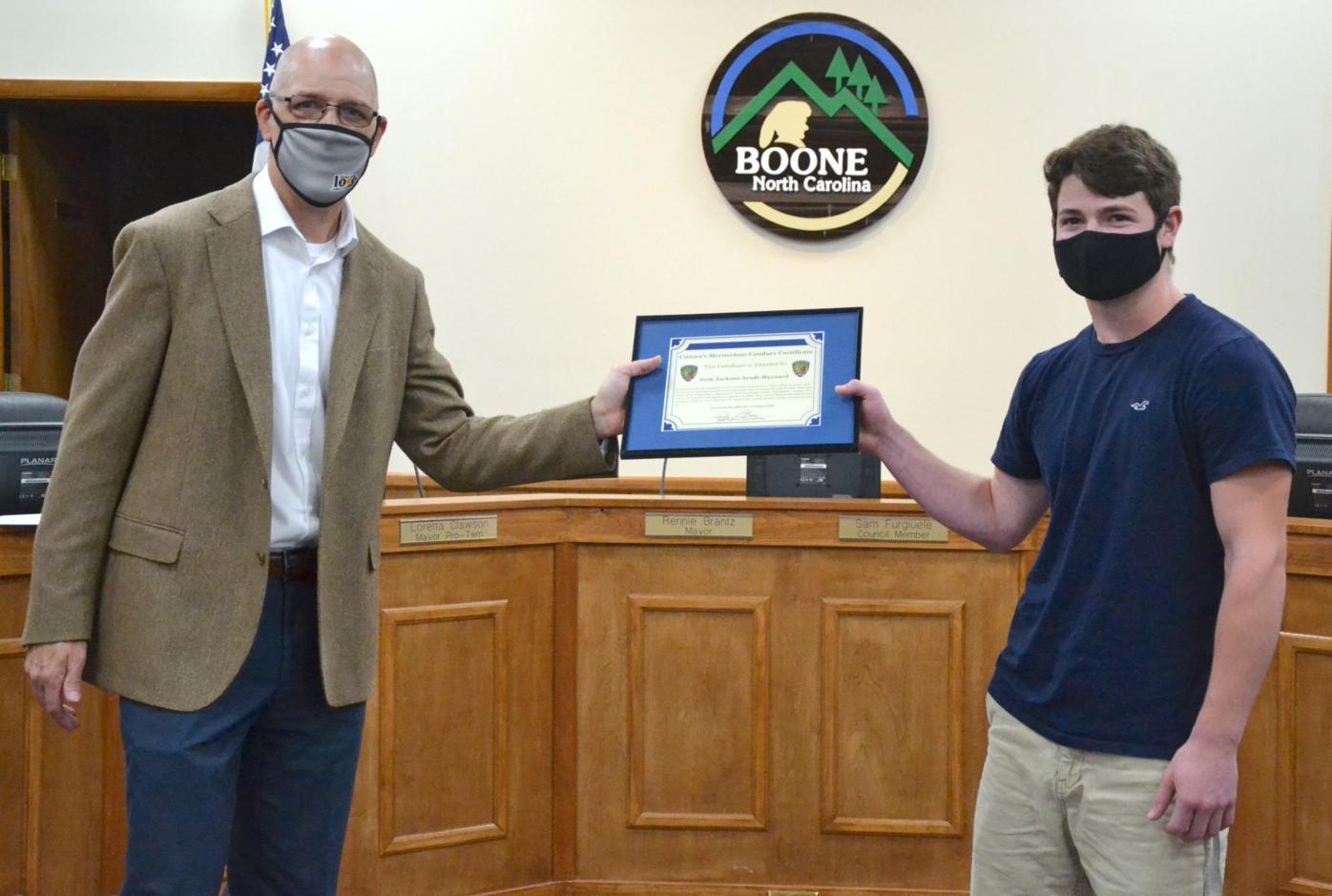 Boone Police Chief Andy Le Beau hands an award to Jack Maynard for his actions of intervening in a crime. 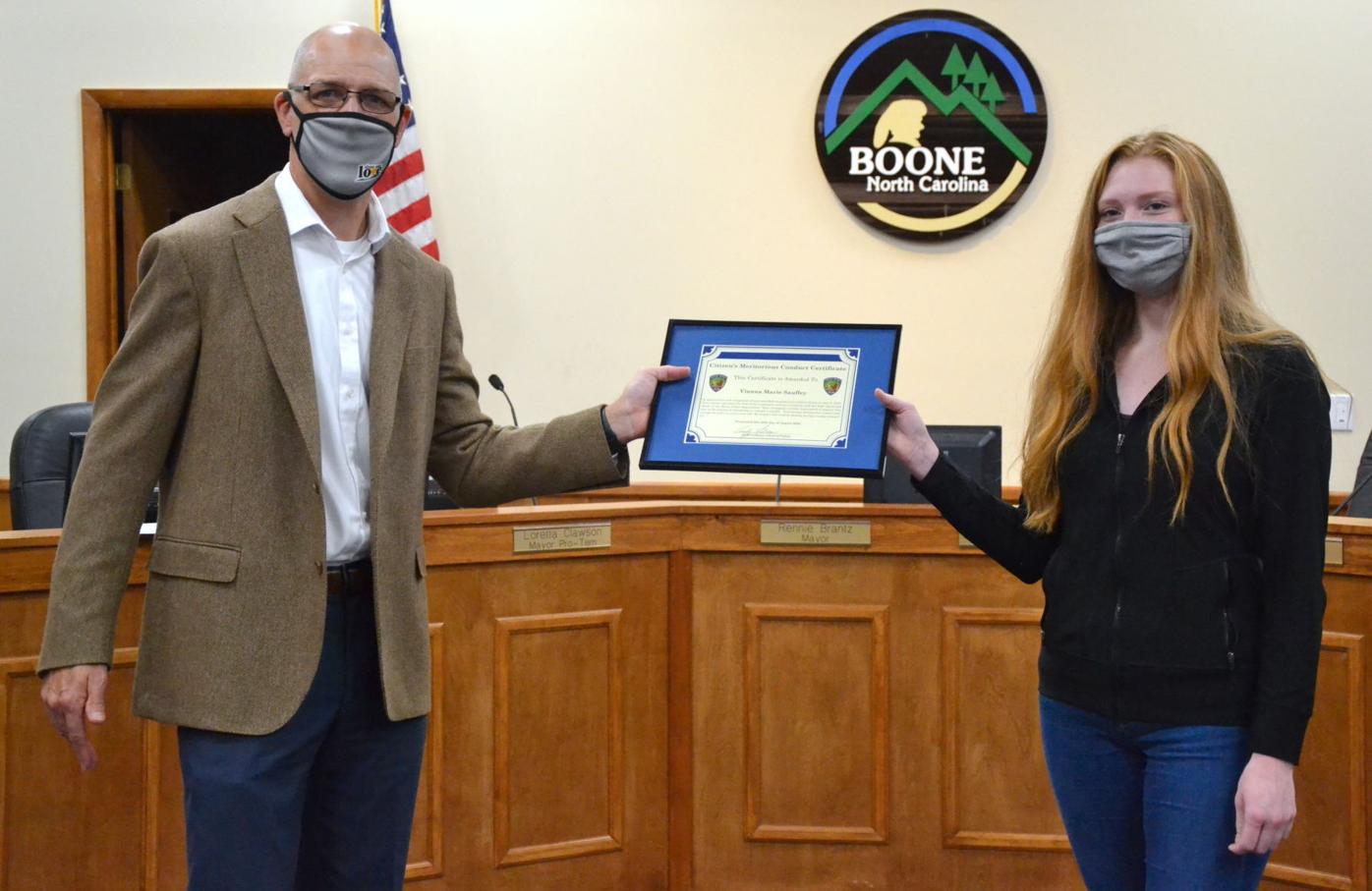 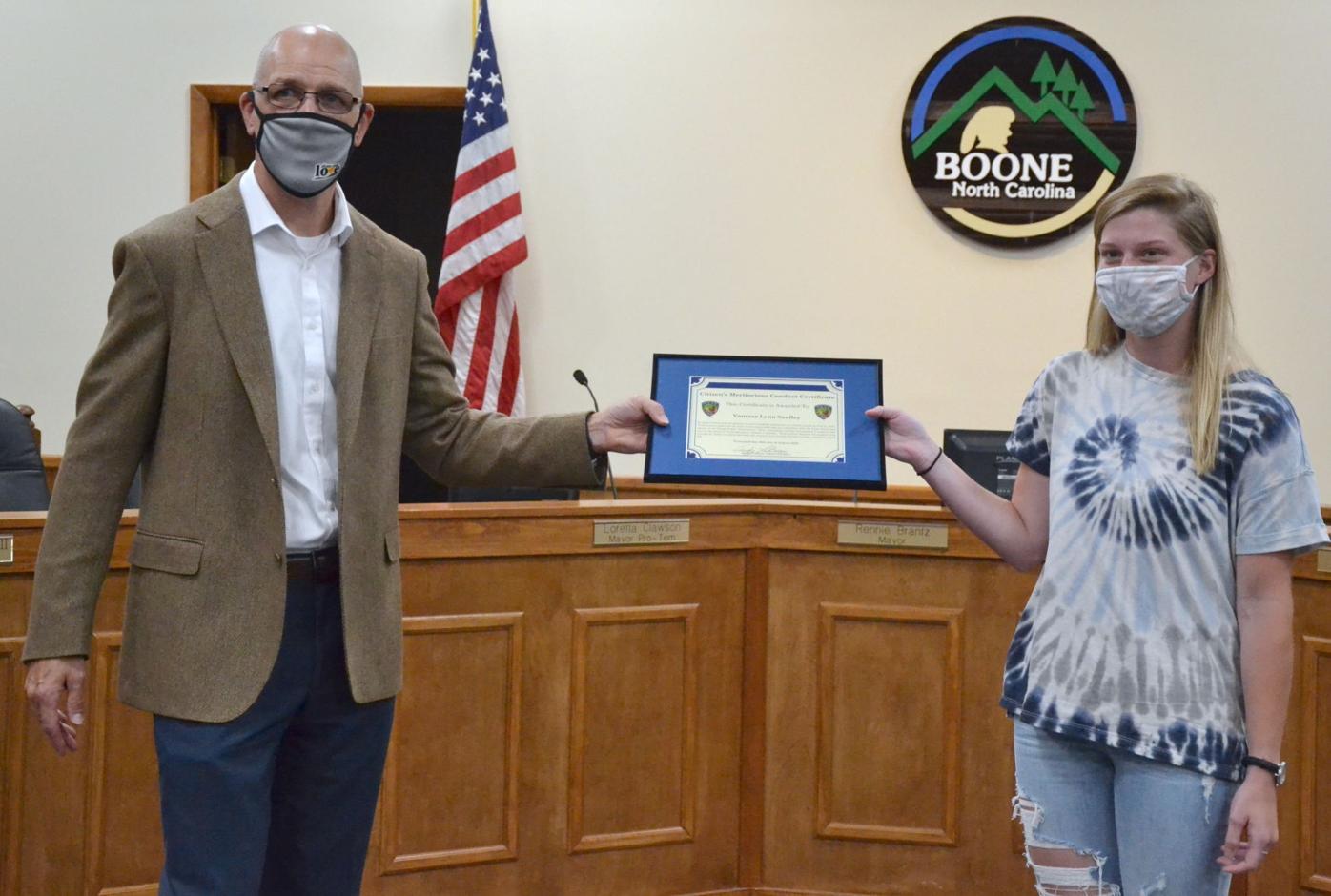 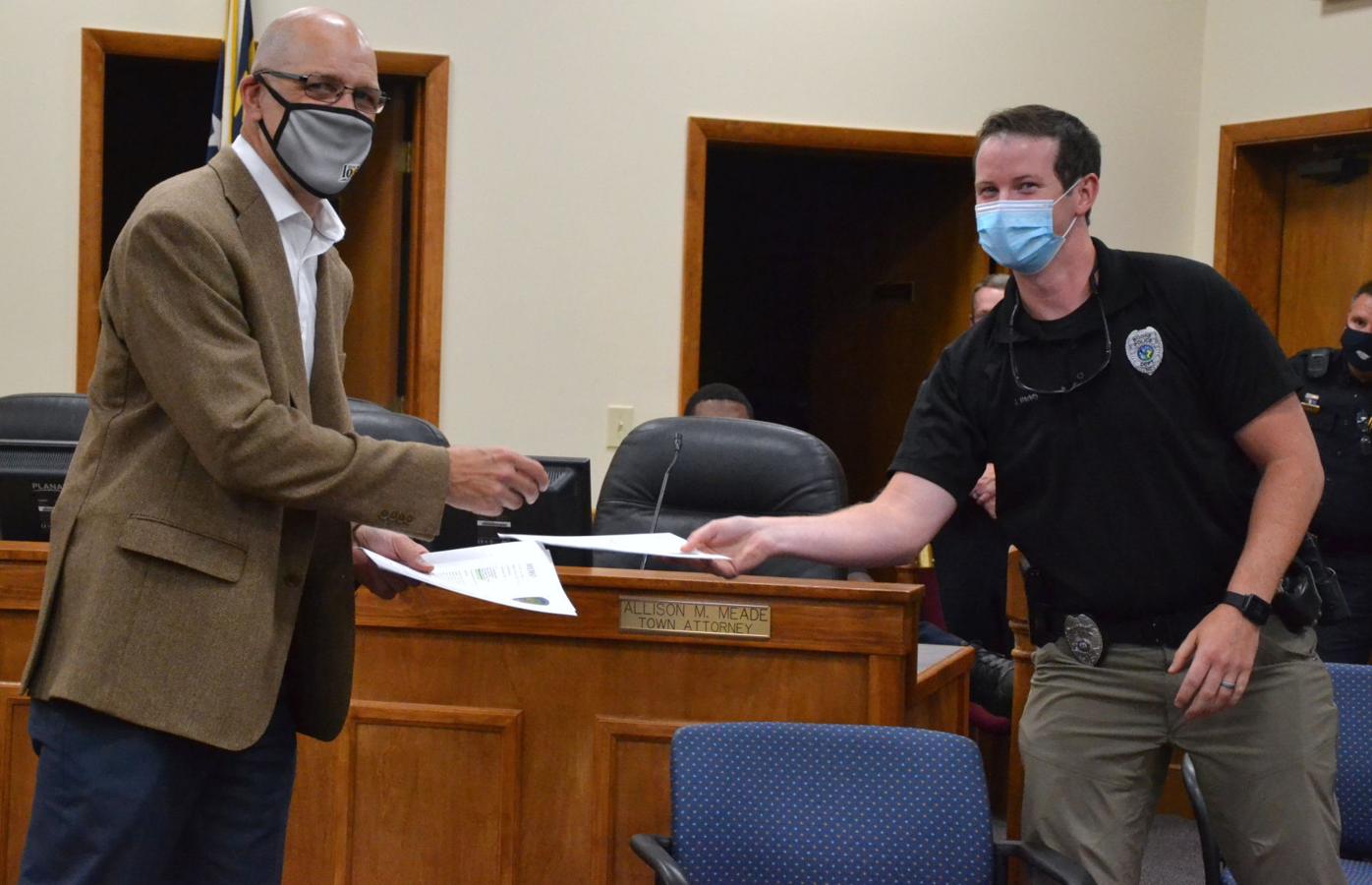 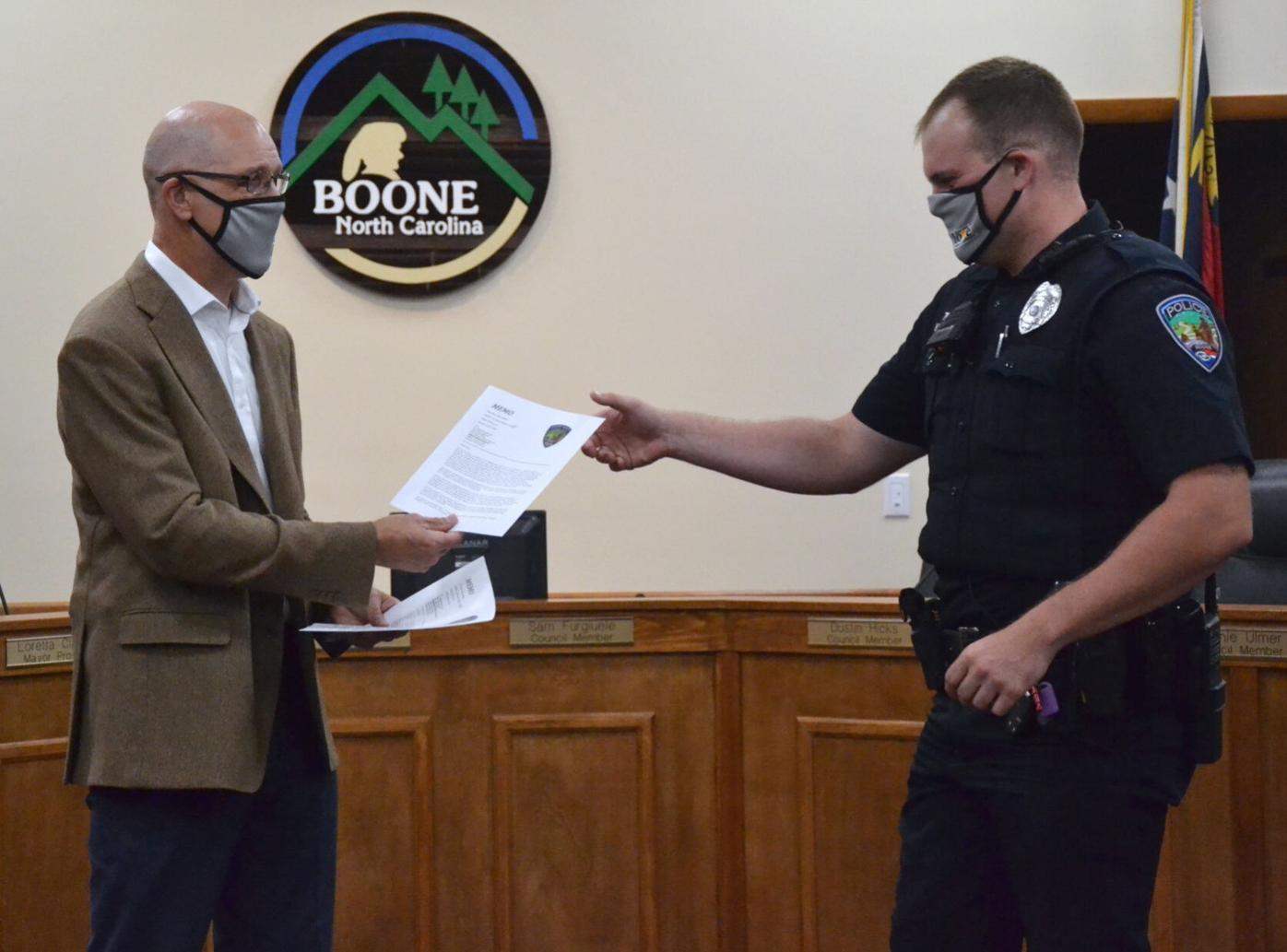 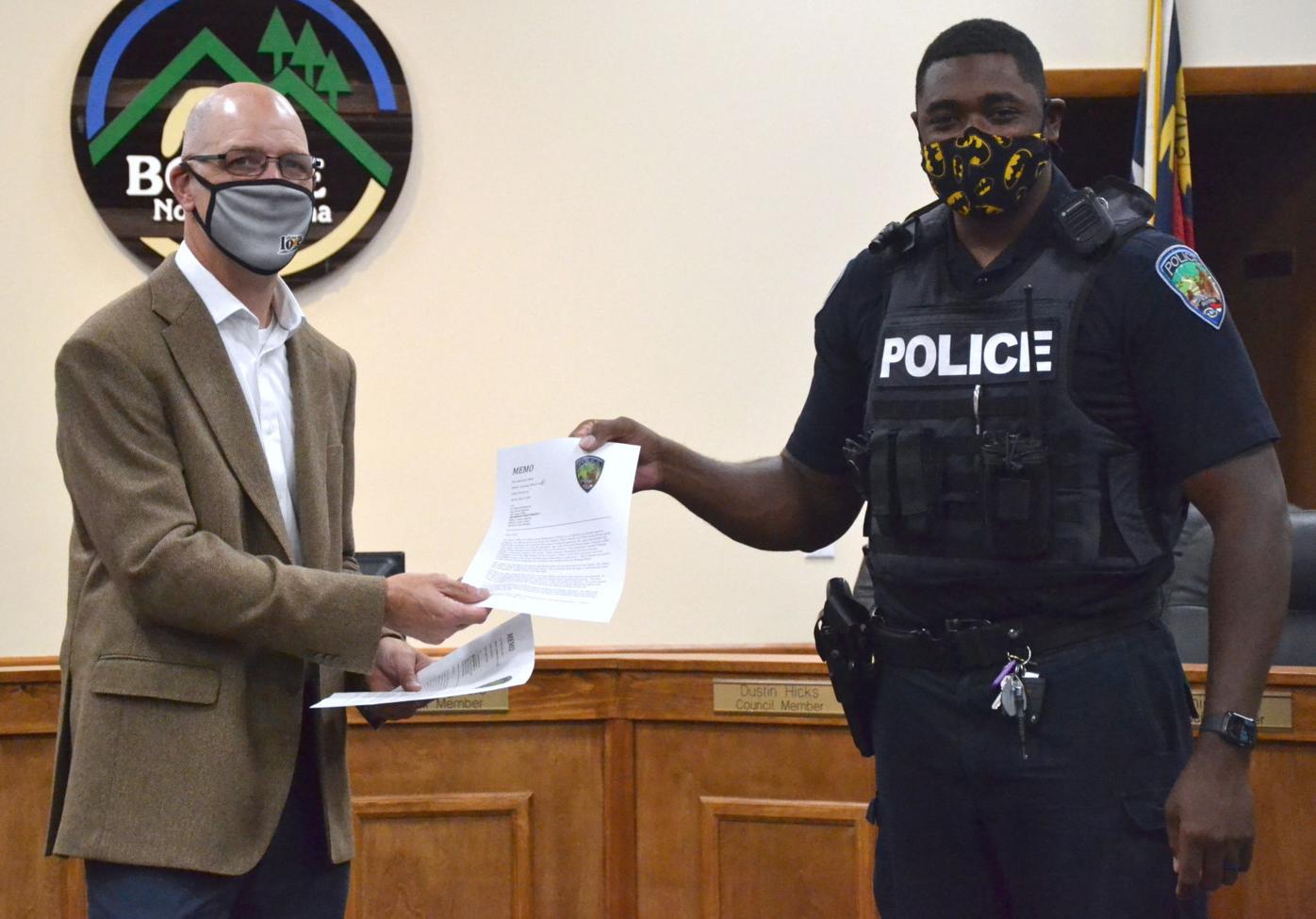 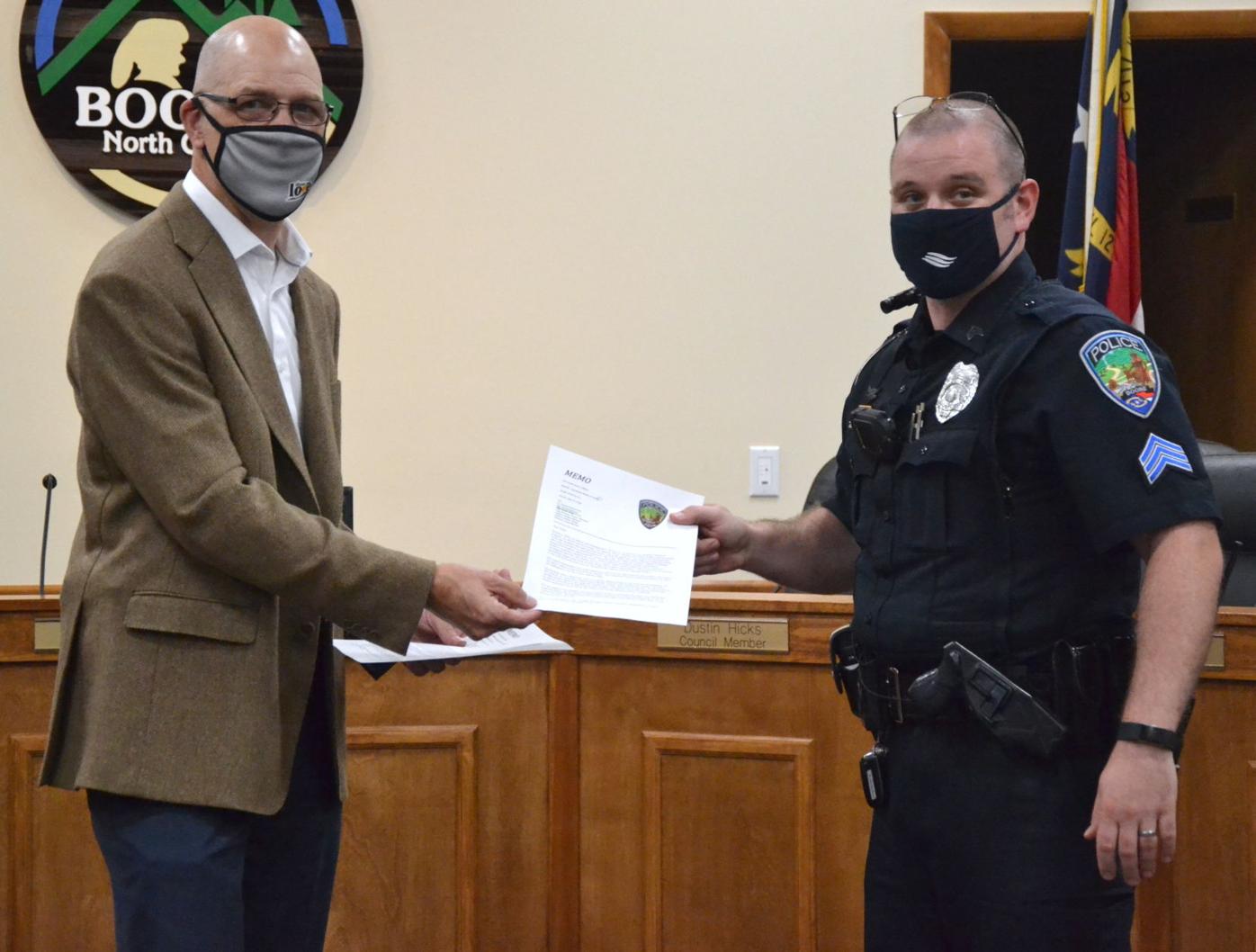 Boone Police Sgt. Lance Wills is recognized for his role in a July 9 incident by Chief Andy Le Beau.

The July 9 incident resulted in the arrest of Oscar Ortiz Jr., 22, of 135 Coffey St., Boone, who was charged with burglary, assault by strangulation, possession of burglary tools and attempted first-degree murder.

Awards were given to Vanessa Saufley, Vianna Saufley and Jack Maynard for their efforts in intervening in the July 9 altercation. Vanessa Saufley explained that the three were watching a movie in their apartment located at 278 Eric Lane when they heard noise coming from the apartment above.

“It sounded like a struggle,” Vanessa Saufley said. “It didn’t sound right.”

Vanessa Saufley and Maynard then went outside to see what they could hear, and ran toward the door of the above apartment, where they could hear screaming. Maynard said he banged his fist on the door until Ortiz opened it while Vianna Saufley called 911.

Boone Police stated that they were dispatched to the apartment complex in reference to a domestic assault in progress. Cpl. Petey Hausley and Officer Austin Johnson “quickly located the residence and confronted the suspect exiting the apartment.” Sgt. Lance Wills and Johnson then conducted a “safety sweep” of the residence and located the victim in her bedroom and called for Watauga Medics to respond.

Johnson immediately started a preliminary investigation until Det. Jake Harkey arrived on scene; Johnson then escorted the victim to Watauga Medical Center along with Watauga Medics. Officer Amber Glenn conducted crime scene security along with evidence preservation. According to Boone Police, Ortiz was brought to the police department, where Harkey was able to obtain a confession from Ortiz that showed “his true intent and willingness to end the victim’s life that night.”

Harkey said the actions of Vanessa Saufley, Vianna Saufley and Maynard scared Ortiz into not continuing with his actions, which saved the victim’s life. Had the three not intervened, Le Beau said the victim likely would have died. Harkey added that the victim and her family extended their gratitude to the community members.

“We’re so impressed with you. We’re so grateful that you took it upon yourselves to not ignore, just blow it off or say, ‘This isn’t my problem.’ There’s a young lady that still has her life … because of what you guys did,” Le Beau said.

Each of the three community members were given a Citizen’s Meritorious Conduct Certificate as recognition of their “unselfish assistance to a fellow citizen.”

Additionally, the department stated that the actions of the officers involved led to the swift apprehension of Ortiz.

“During times when a dangerous crime is occurring, officers are faced with unknown circumstances,” Boone Police stated. “Our due diligence and standard of professionalism was put on full display that night. The officers that responded along with Harkey stopped a heinous crime from occurring and secured the arrest of a violent individual. Through training and experience, the officers were flawless in their efforts to help save an innocent victim’s life.”