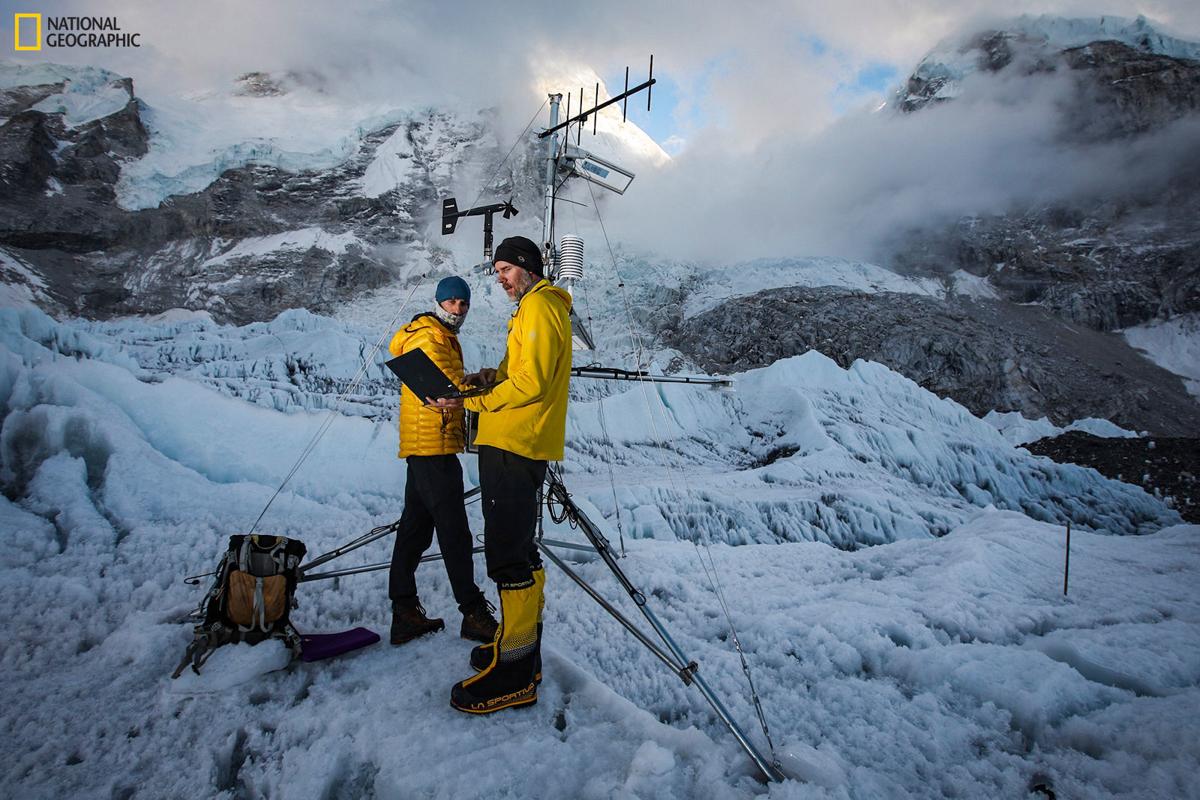 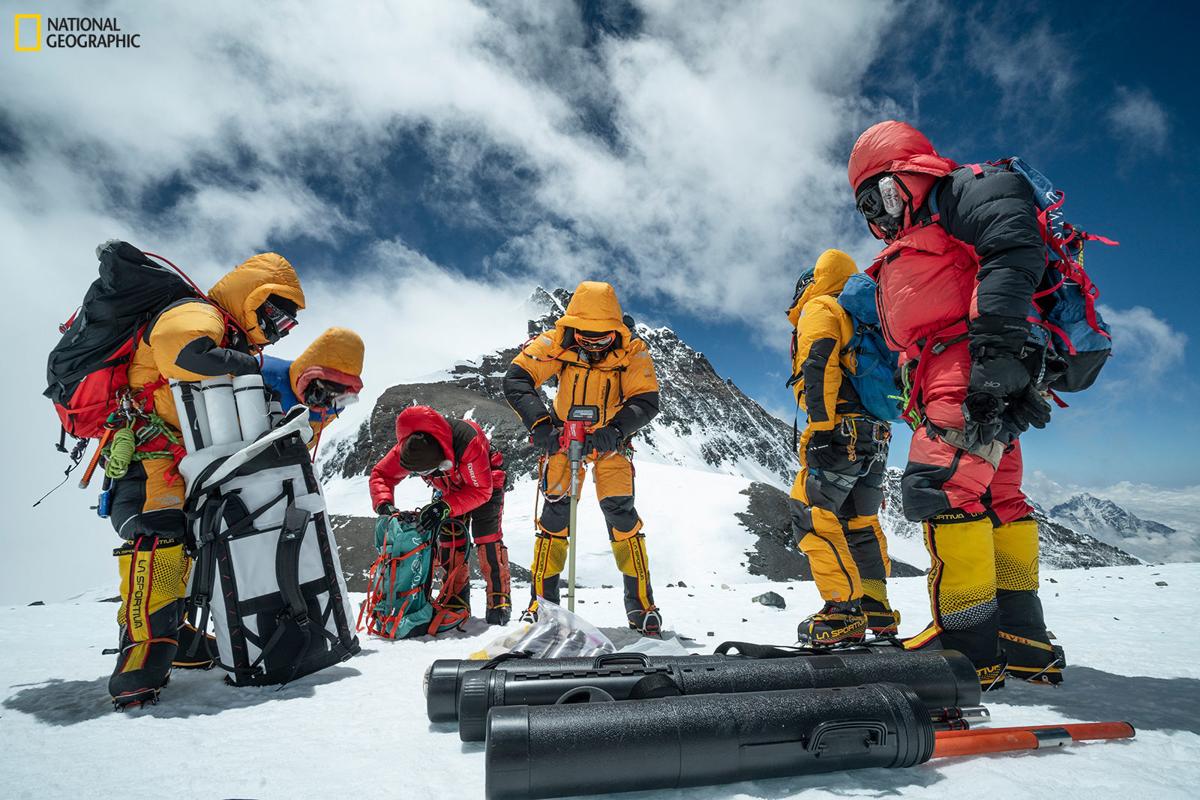 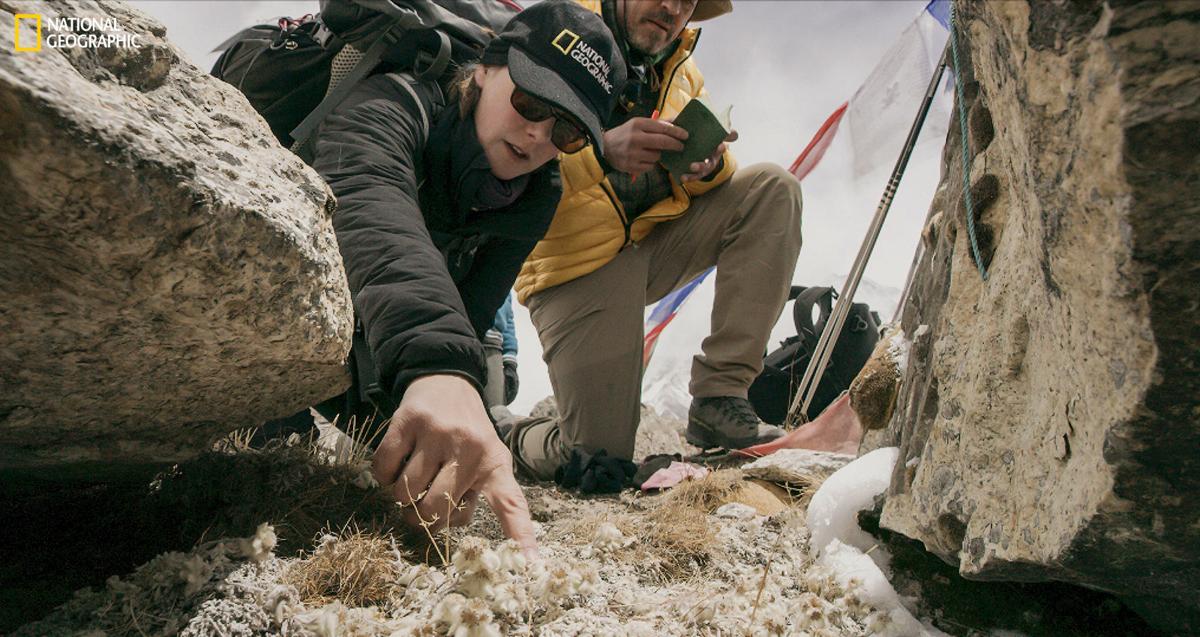 Tracie and Anton Seimon, members of the biology team on National Geographic and Rolex’s Perpetual Planet Expedition to Mt. Everest, survey the high-elevation terrain around Everest Base Camp for signs of plant, insect, and animal life. Learn more at www.natgeo.com/everest. 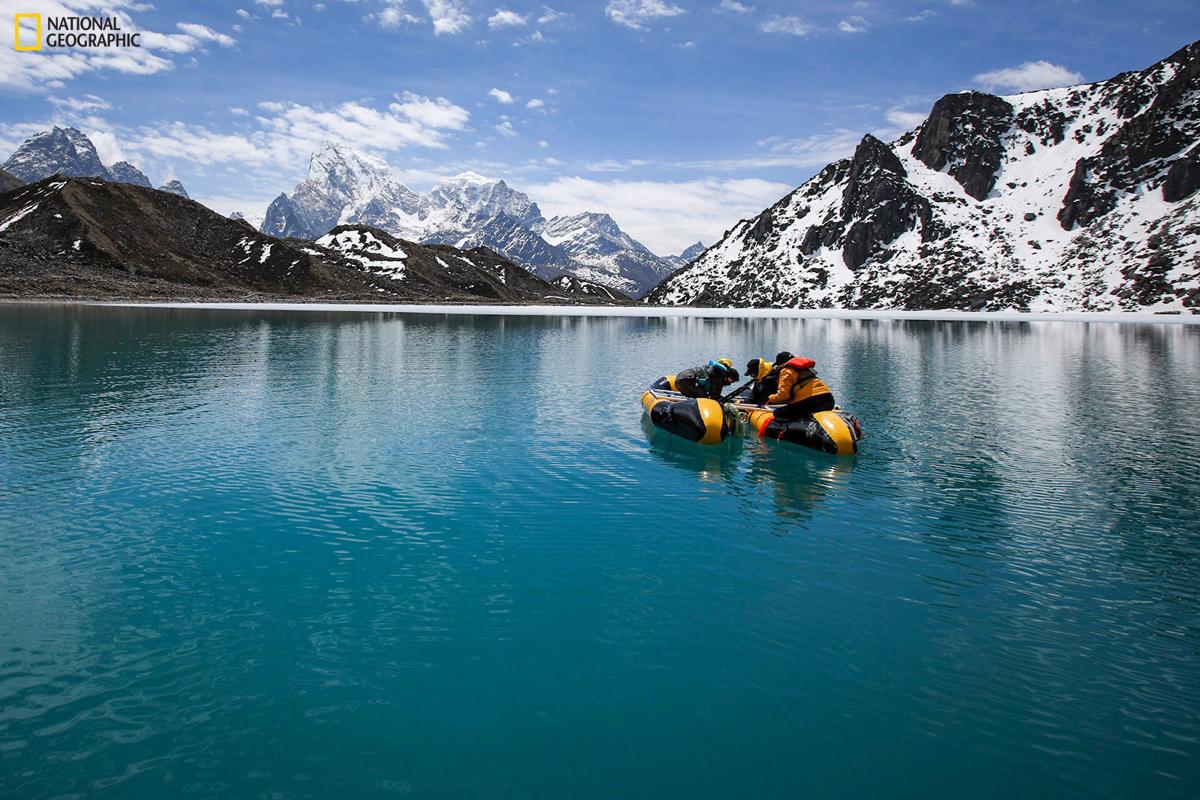 The geology team from National Geographic and Rolex’s Perpetual Planet Extreme Expedition to Mt. Everest preps to take a lake sediment core at a glacial lake in the Gokyo region in spring 2019. Learn more at www.natgeo.com/everest.

Tracie and Anton Seimon, members of the biology team on National Geographic and Rolex’s Perpetual Planet Expedition to Mt. Everest, survey the high-elevation terrain around Everest Base Camp for signs of plant, insect, and animal life. Learn more at www.natgeo.com/everest.

The geology team from National Geographic and Rolex’s Perpetual Planet Extreme Expedition to Mt. Everest preps to take a lake sediment core at a glacial lake in the Gokyo region in spring 2019. Learn more at www.natgeo.com/everest.

Dr. Baker Perry, professor of Geography at Appalachian State University’s Geography and Planning Department, is sitting at his desk in Boone still feeling the effects of his latest adventure.

Two weeks earlier. Perry, fellow ASU professor Dr. Anton Seimon and a team of fellow scientists, filmographers and Sherpas led by the National Geographic Society and Tribhuvan University in Nepal spent almost two months on the slopes of the world’s highest mountain. The trek was a part of the Rolex Perpetual Planet Extreme Expedition, which seeks to gain knowledge about the effects of climate change on our mountains.

More interested in doing science than reaching the summit of Mt. Everest, the trip by this team proved to be more dangerous than usual.

As the world now knows, in May, 11 people died trying to reach the top of Mt. Everest, mostly due to overcrowding near the summit because of climbing companies who allegedly let too many people attempt the ascent. There were tourism agencies that seemed to lower standards when it came to mountaineering requirements as well as dropping their trek fees and that literally caused hiker traffic congestion on the slope. Because many had to wait to get up and down from the summit of Mt. Everest, oxygen tanks ran dry and altitude sickness soon tapped its victims on the shoulder.

Perry and the overall team trained for weeks before they attempted their climb. Their goal was to bolt various weather stations into the cold and wind-blown rock on Mt. Everest at 27,000 feet above sea level.

“The one thing I realized while up on the mountain was how strong a team we had,” said Perry. “This was not something that any one of us could have done by ourselves. Our Sherpa team was truly exceptional. Many of us spent most of the month of January training with the Sherpa team, not only climbing on ice and perfecting our mountaineering skills, but also learning how to do tripod installations and setting up weather sensors. As soon as we got to Mt. Everest base camp in April, we practiced setting up these high-altitude weather stations with our Sherpa team and everybody picked it up quickly. Up high, the Sherpa’s bodies and brains work a little better than the rest of us, so they were huge players in this whole process.”

As they waited for their chance to climb, life at base camp was not easy, and at times even boring.

“We arrived at base camp on April 18, 2019, and we lived at base camp or higher for over a month before we made our summit push,” said Perry. “That is a lot of time up high and it really takes its toll on your body. Most of us, probably 90 percent of our group, developed an upper respiratory infection or a cough in the dry and cold air. A number of members of our group came down with the flu. It was hard and none of us ever fully recovered after that. You could still function, but not nearly at the level we could do previously. That was frustrating, for sure. Even now, after I climbed back down and arrived here in North Carolina two weeks later, it has taken a while to regain my health and my strength.”

Due to the weather, the days when humans could attempt to reach the summit of Mt. Everest in May were limited, which contributed to the clustered groups of climbers on the mountain and the tragedies that occurred.

“We climbed up the Nepal side of Everest and we faced some traffic jams and crowding at different places along the route,” said Perry. “That contributed to us not going all of the way to the summit. We placed our weather stations at a place called The Balcony, about 1,500 feet away from the top of Everest. We were honor-bound to do our scientific work and it was a safety consideration as well, because of having to climb that slowly and being up there that long without being sure if we would have sufficient oxygen in our tanks.”

The team’s journey began in the dark.

“We left Camp Four at 11:30 p.m. the evening before and climbed through the night,” said Perry. “About two and a half hours after we started, we hit the back end of this massive traffic jam, this long line of people that were heading to the summit. Our pace just slowed considerably and our Sherpa team specifically became visibly frustrated. When we did eventually top out at The Balcony about four and a half hours in, our lead Sherpa, named Panuru, was already thinking that this was as high as we would go.”

With their sense of adventure intact, it was not an easy verdict to accept.

“Ultimately, Sherpa Panuru was the one to make the call as he was the most experienced and respected among us with 17 Everest summits under his belt,” said Perry. “He reasoned that if we kept going, it would take at least another seven hours to get to the summit, and then we would have had another two or three hours of work to do up there. That would have been an 18-hour round trip, and that is where people get in trouble. It was a tough decision, though, because you are not that far away, looking up at the summit.”

Even though the team shortened its trip, the tragic end-results of bad decision making by others was in plain sight.

“There were dead bodies that we encountered that had just succumbed the day before,” said Perry. “They were right there, still on the fixed line. You literally had to step over them and go around them. That was unexpected and it was obviously very tough to see that. You start thinking, ‘Gosh, what are the circumstances that led to them to be in that situation and die?’ It is a grim reality up there that death is very close to you. Altitude sickness can happen quick, especially when combined with very long days, exhaustion and people running out of oxygen. When you see all of that up there, it makes you question some things and makes you value life. There was a lot of concern among our friends, families and colleagues about what was happening with us up on Everest and that made us even more safety conscious as well.”

One of Perry’s team members did experience some minor frostbite on their fingertips, but for the most part, that was the extent of the injuries.

Meanwhile, the mission’s goals were accomplished as the weather stations were drilled and anchored into the rock on Mt. Everest at 27,657 feet above sea level.

Afterward, on June 13, Perry represented Appalachian State University in a panel discussion streamed worldwide from Washington, D.C., that was a part of the National Geographic Explorer’s Festival. As with all of Perry’s work, the goal is to monitor and document the changes happening on our planet and to deal with the adjustments to come. And, with three filmographers on the Mt. Everest climbing team, a documentary film about the trek is sure to arrive in the future from the National Geographic Society.

In the meantime, Perry continues to recover in Boone and prepare for future classes at ASU as he collects data from the world’s highest weather station that he helped to place on the tallest mountain on Earth.