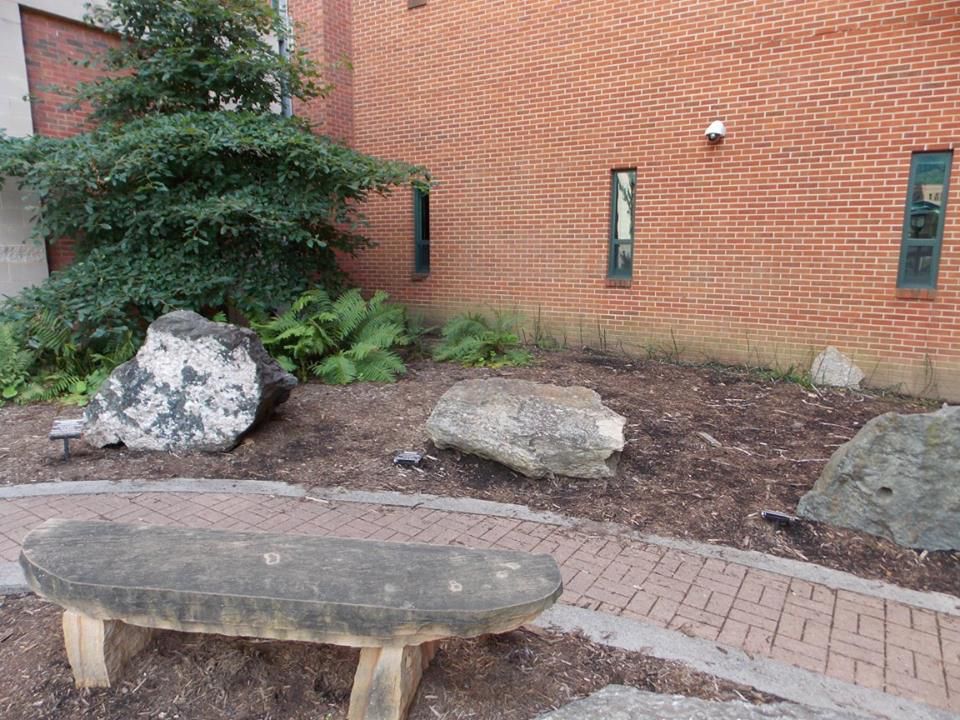 Andy Heckert and Travis Donovan confer with sculpture students as they begin the design process. Matt Celeskey joins in by way of Google Hangouts. 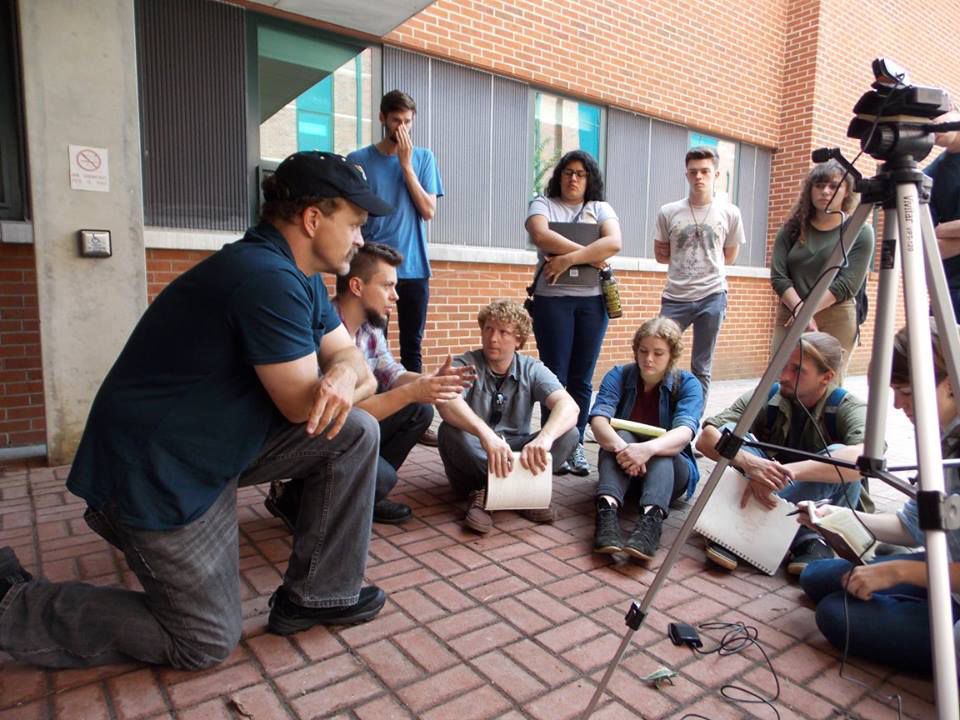 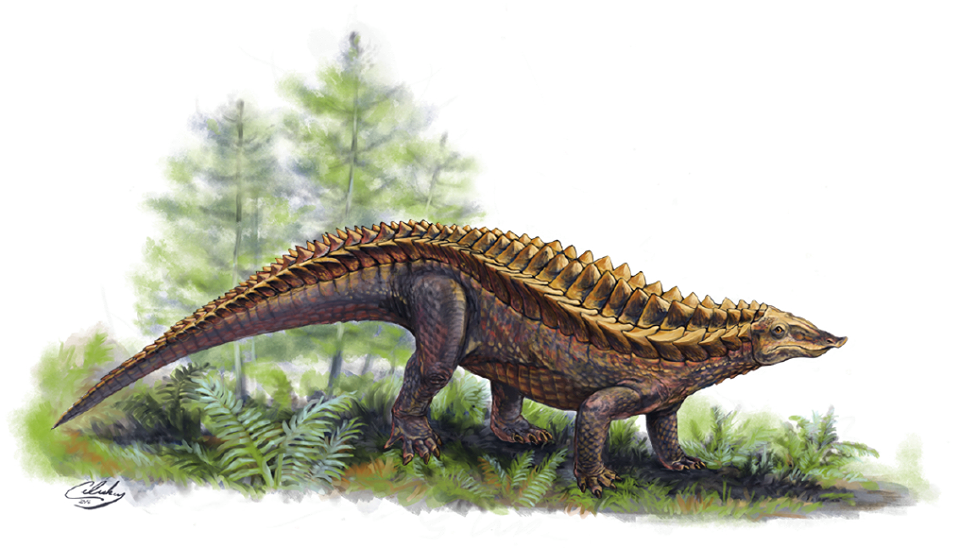 An illustration of what will soon take up residence in the Aetosaur Habitat.

Andy Heckert and Travis Donovan confer with sculpture students as they begin the design process. Matt Celeskey joins in by way of Google Hangouts.

An illustration of what will soon take up residence in the Aetosaur Habitat.

Appalachian State University is the home to several unique sculptures, and is currently in the process of bringing history to life with a new project.

ASU’s geology and art departments are teaming up to create a lifesize model of the prehistoric animal, the aetosaur, to go on display at the university’s rock garden.

While the crocodile-relative, known for its spiny and spiky features, is not technically a dinosaur, it is prehistoric and lived during the time of the earliest known dinosaurs.

Andy Heckert, professor of geology at Appalachian State, discovered the new species of aetosaur at a rock quarry in Raleigh, where he and his colleagues at the North Carolina Museum of Natural History were able to research the animal.

Now, through the idea of another geology professor, Lauren Waterworth, Appalachian State is preparing to create a lifesize model of Heckert’s discovery, which is believed to be the first of its kind.

“I have seen life constructions of this group of animals, but I’ve only seen them in South America,” said Heckert. “I’ve not seen a fullsize one in North America. It’s really exciting.”

Waterworth, the brainchild behind the project, acts as the team coordinator in creating the sculpture.

“When I was a kid I loved dinosaurs,” she said. “I wound up on the Internet one day, looking at how dinosaur models are built and everything else involved. I thought it would be so fun to have one here. I went to Andy with my idea and told him, ‘This is a crazy idea, but we should build a dinosaur.’”

With Heckert on board, and the perfect location to display the model, Waterworth knew she needed help from an artist and a sculpting expert. That’s where Travis Donovan, visiting assistant professor of sculpture, came in.

“I got in touch with Travis in the art department to see if he’d be willing to give us some pointers,” said Waterworth. “One of the first things he said was, ‘I’d like my sculpture class to do this as a class project in the fall.’ At that moment, I knew it was going to come together.”

Donovan said the students will be the main fabricators of the entire project.

“It was a really exciting idea when Lauren contacted me, and it worked really well with the curriculum we already offered,” said Donovan. “It’s often hard to find a really good experience for the students to kind of grapple with real-life challenges and problem solving skills that are involved in actual professional collaborations. It’s a really awesome experience.”

While Appalachian State is involved in the experience, it couldn’t be made possible without the help of Heckert’s former colleague, Matt Celeskey. His expertise as a paleontological artist comes all the way from New Mexico, where he is an exhibition designer for the New Mexico department of cultural affairs.

“I worked with Dr. Heckert to reconstruct the skeleton and possible life appearance of Gorgetosuchus,” said Celeskey. “We extrapolated the existing fossils and compared them to more completely known relatives to create the first skeletal reconstruction of this animal, and an illustration of how it might have appeared in life.”

Donovan and his sculpture class will use these references to create the lifesize sculpture.

“Gorgetosuchus is not a familiar animal, even to most paleontologists, so a lifesized sculpture at App State is going to give everyone the sense of seeing something new and different,” Celeskey said.

Heckert said the length of the aetosaur is as long as eight feet, give or take. Donovan’s sculpture class will utilize a lot of new digital fabrication equipment, from 3-D printing to digital manipulation, something he’s been wanting to integrate more into his curriculum.

The aetosaur is built from carved foam and steel, with plasticine being the final detailed skin. As progression occurs, casting and clay with silicone or a flexible material will be used to capture details. It will finally be transferred into the finished bronze product.

Heckert said the students will work up through the plasticine step, and a donor is needed to get to the bronze.

One of the most interesting aspects of the reconstruction and modeling process is that it’s a hypothesis.

“It’s what we think this animal would look like if we were able to find the whole skeleton,” said Heckert. “We’re certainly going to be right about the overall type of the animal, but it’s really neat that the whole thing is a hypothesis.”

From the geology department to the art department, students, faculty and the community are excited about this project.

“As a scientist, it’s really gratifying to have your scientific work out there where the general public can get at least some inkling of it,” said Heckert. “Many people don’t realize North Carolina has a rich and important fossil record. It shows that science progresses, and it gets people to think about how this state has changed over time. It’s a neat thing to share.”

“I’ve always had a love and fascination for organic chemistry and geology,” said Donovan. “So to be able to collaborate like this — it’s a dream come true.”

Waterworth said hundreds of students come through the rock garden every day, and every year there is a range of people from preschoolers to adults who experience the educational garden.

“It is a really heavily used educational resource,” she said.

The department of geology is currently developing fundraising plans to complete the project, and is happy to speak with anyone interested.

More information can be found on the department Facebook page, at https://www.facebook.com/appalachiangeology/.