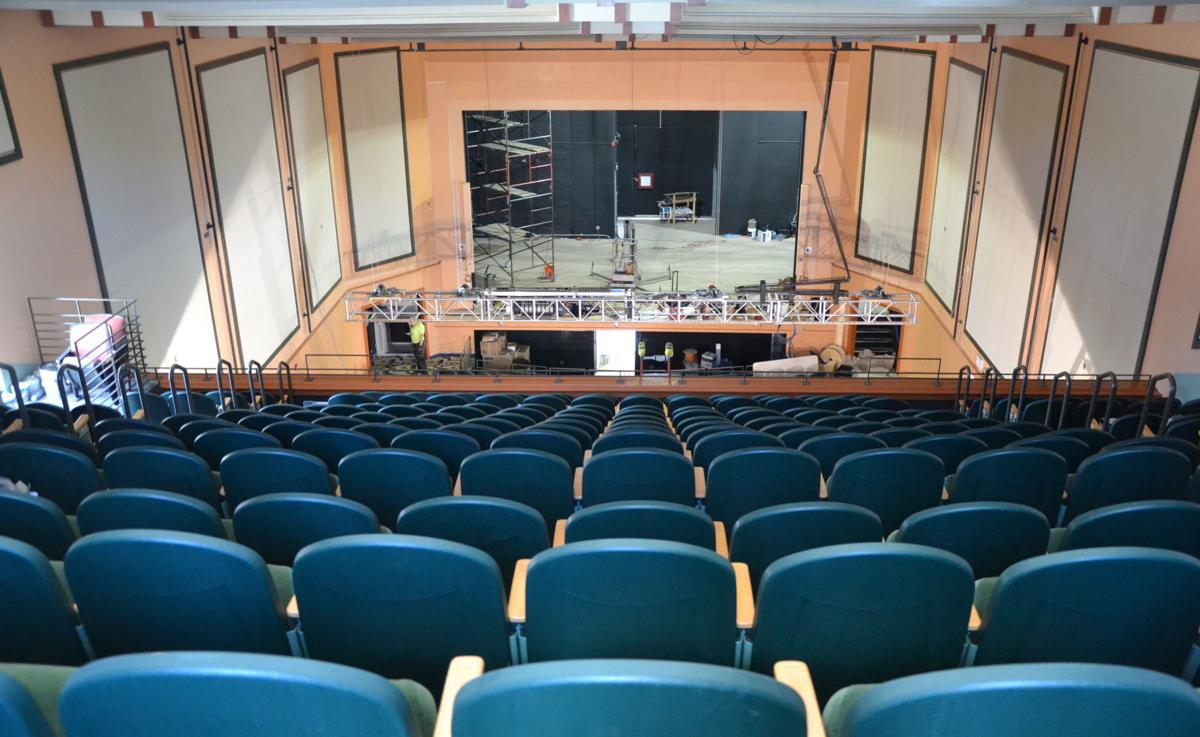 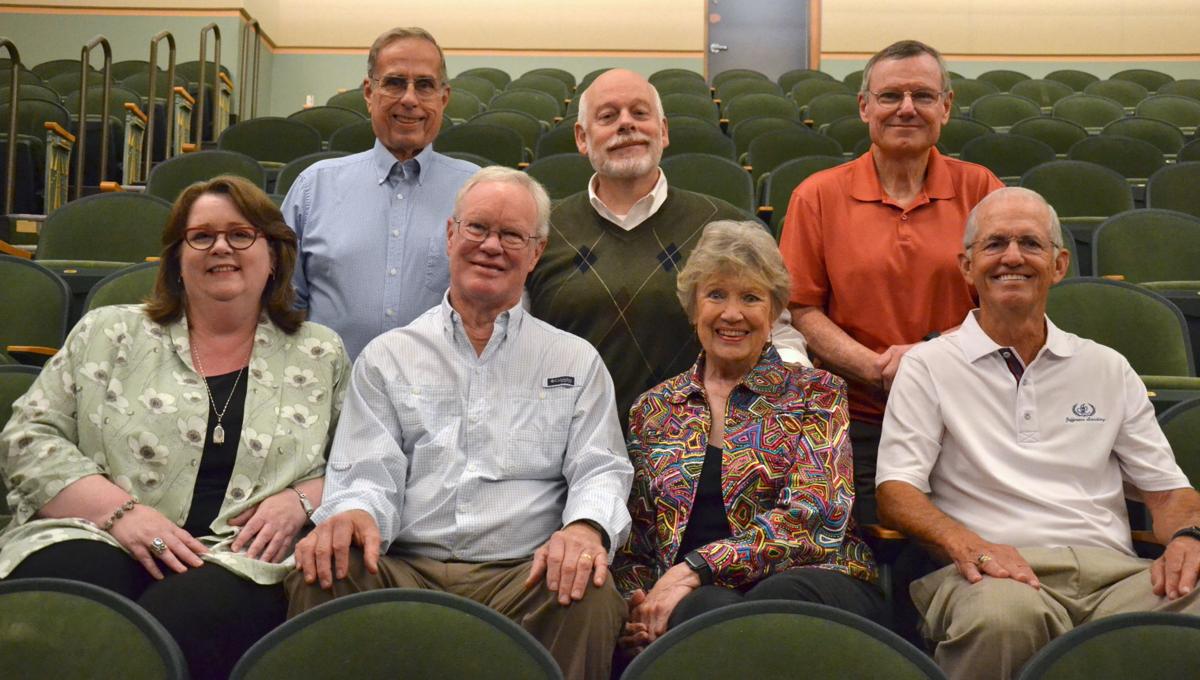 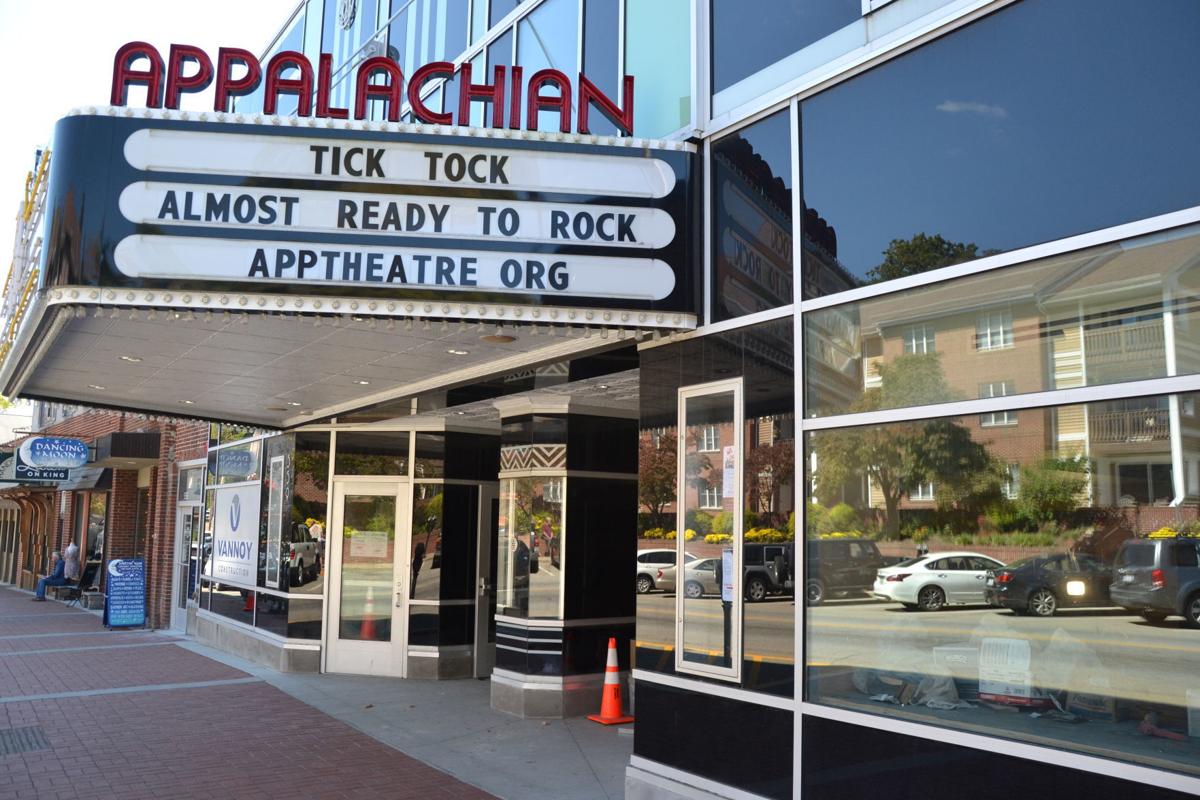 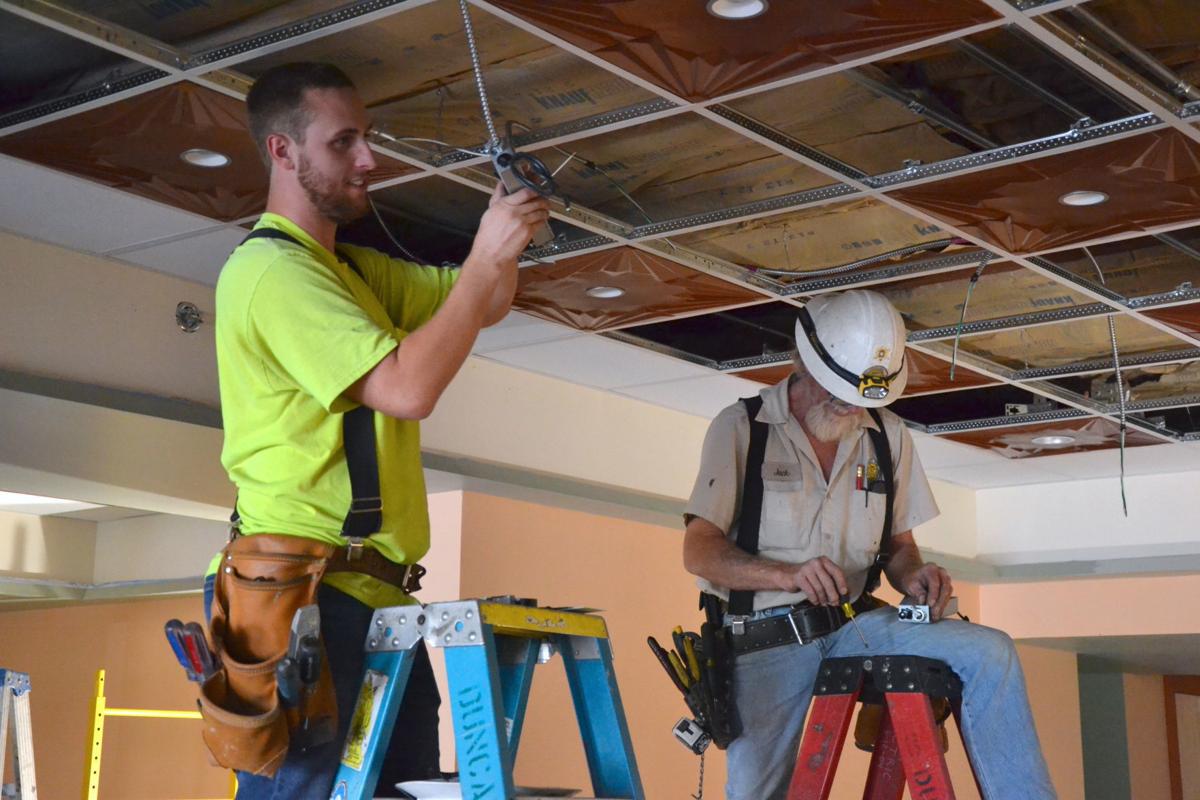 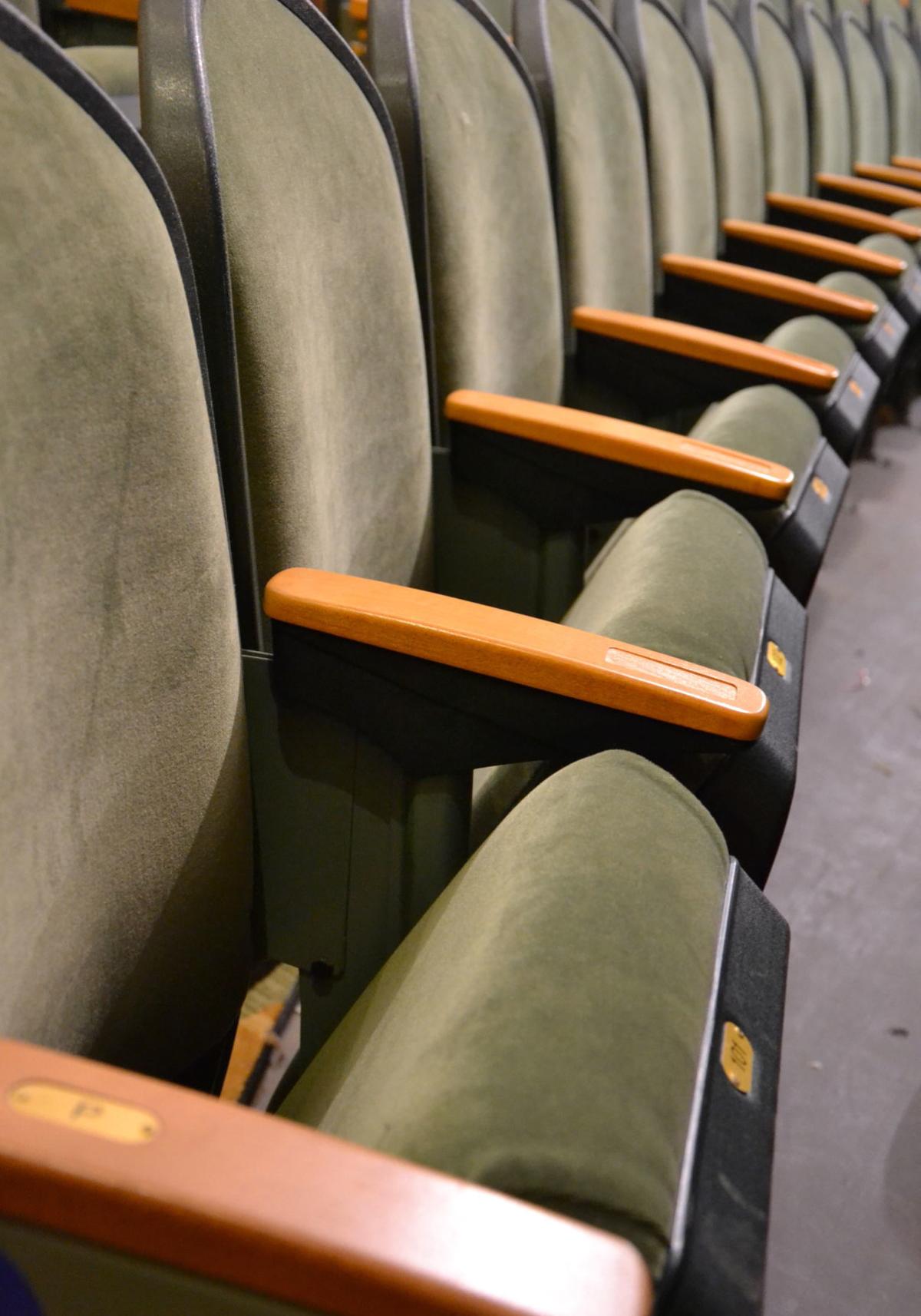 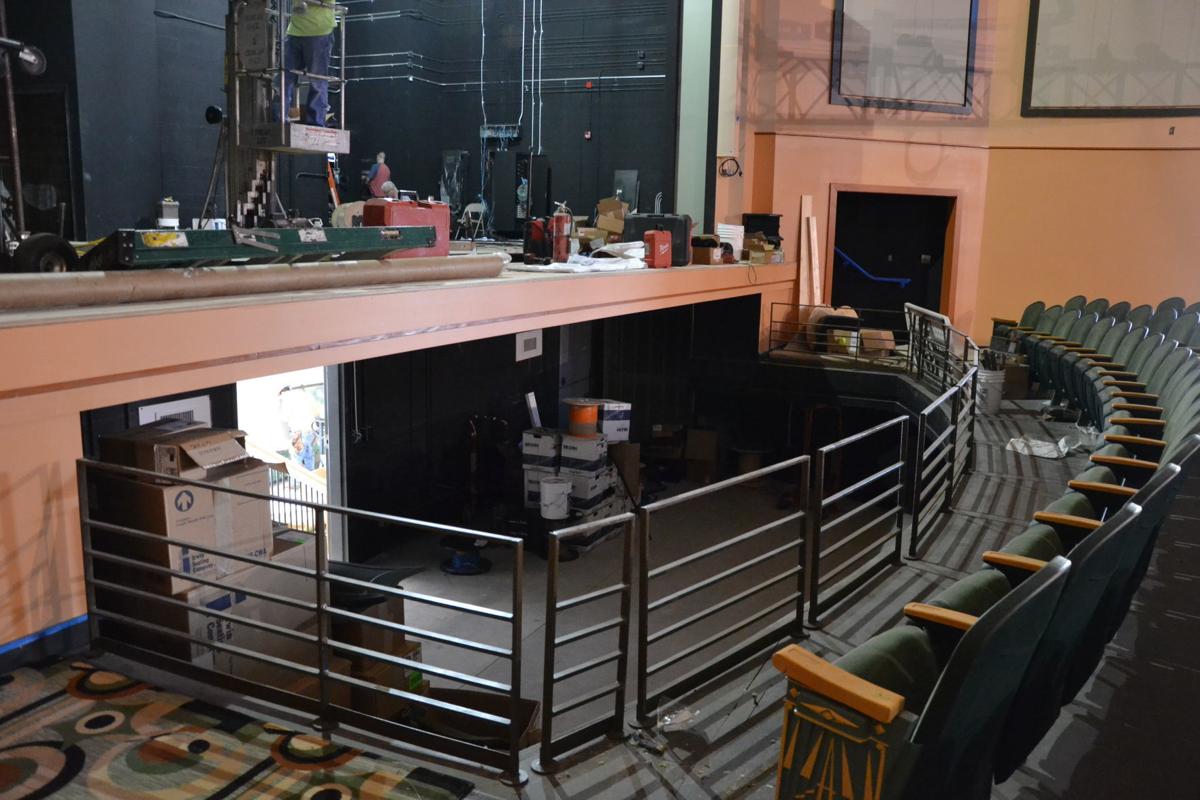 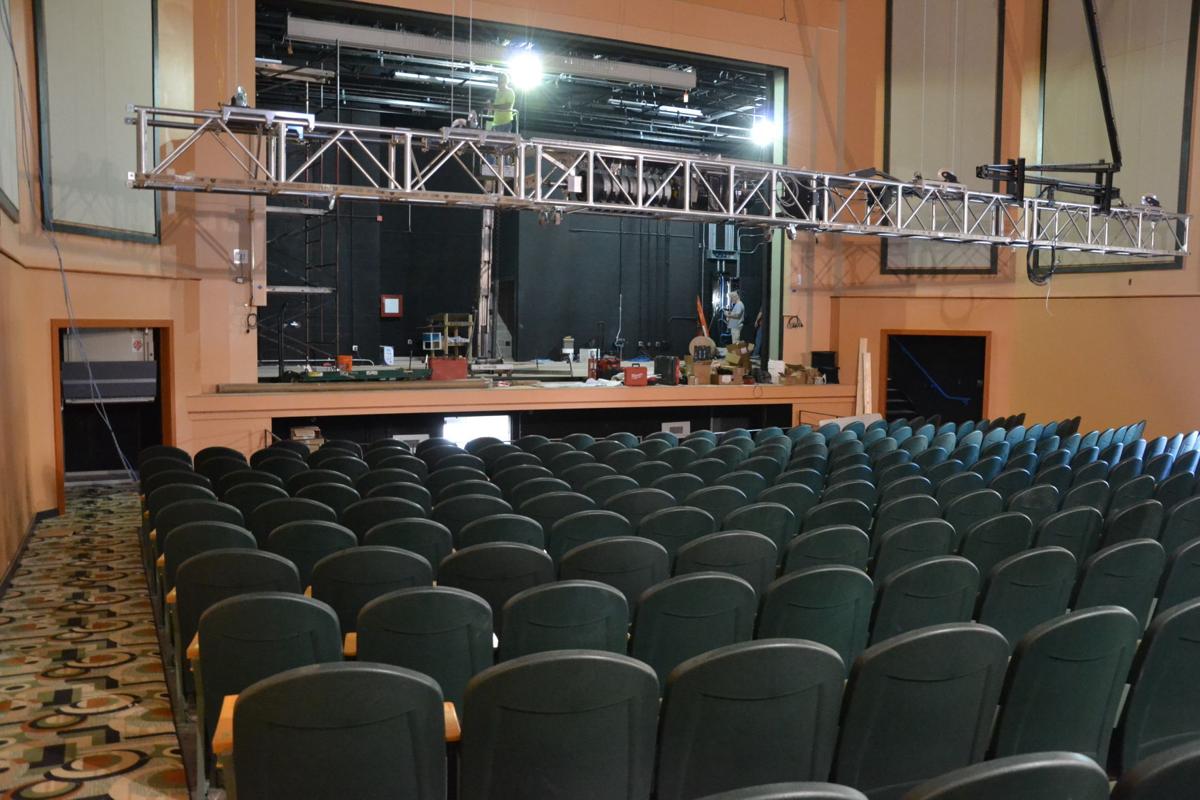 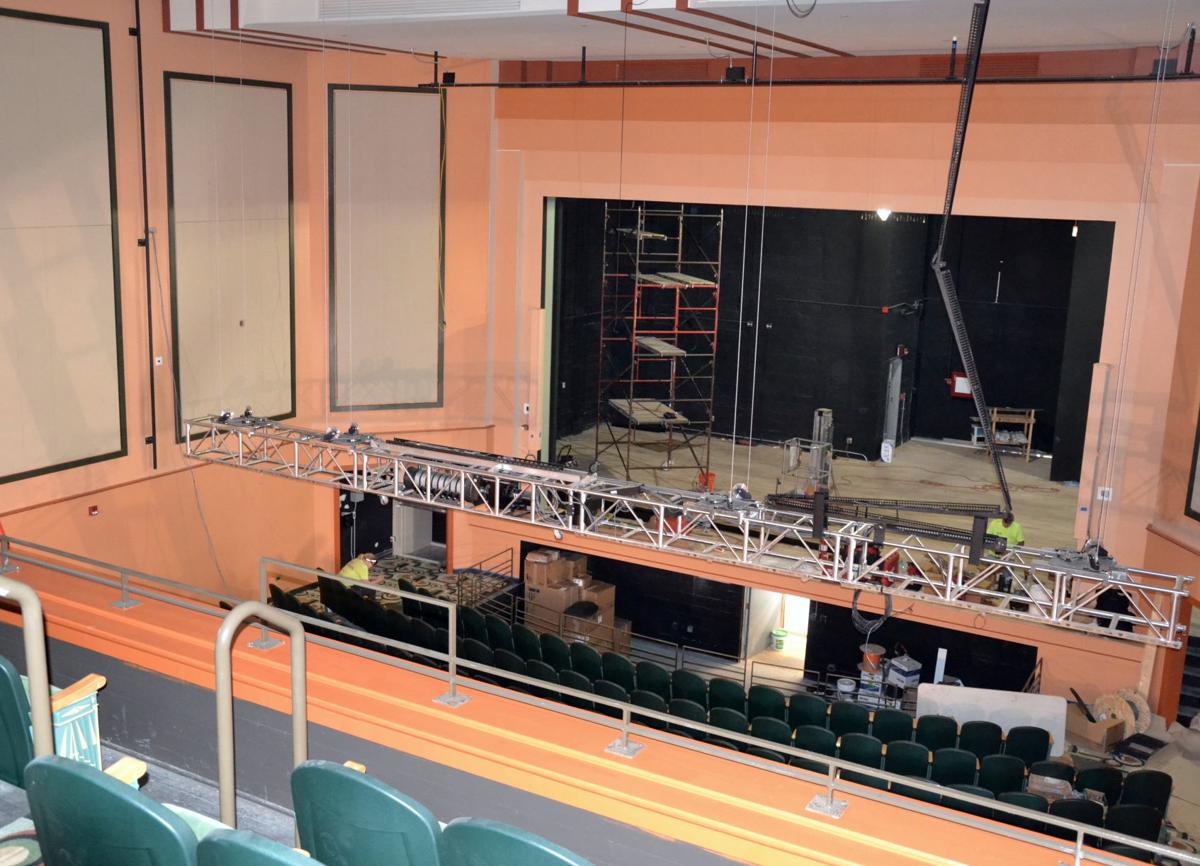 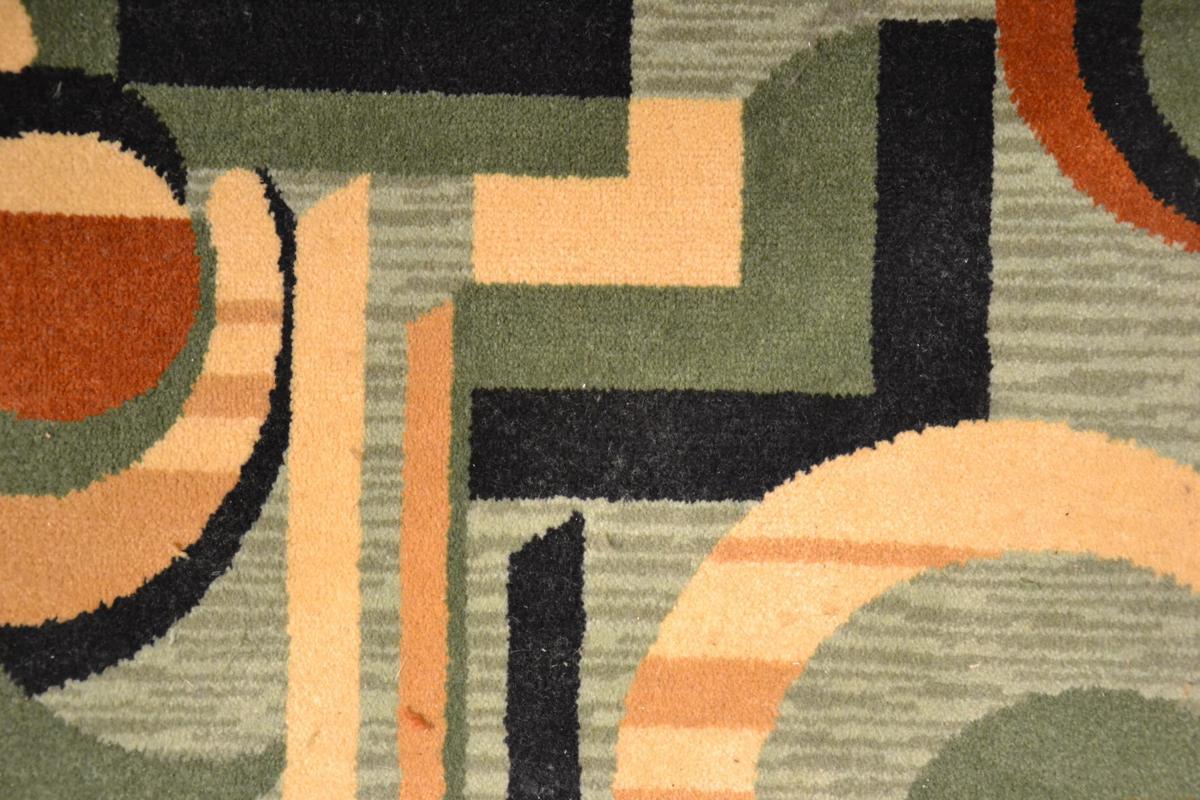 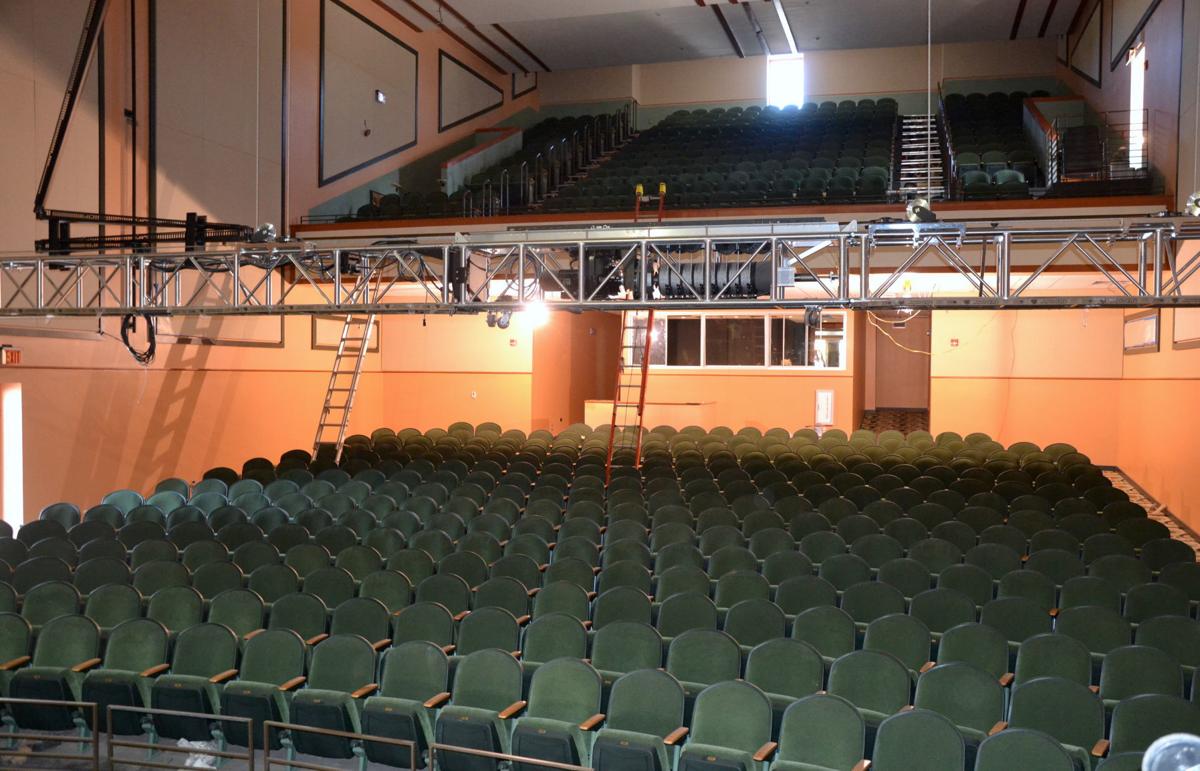 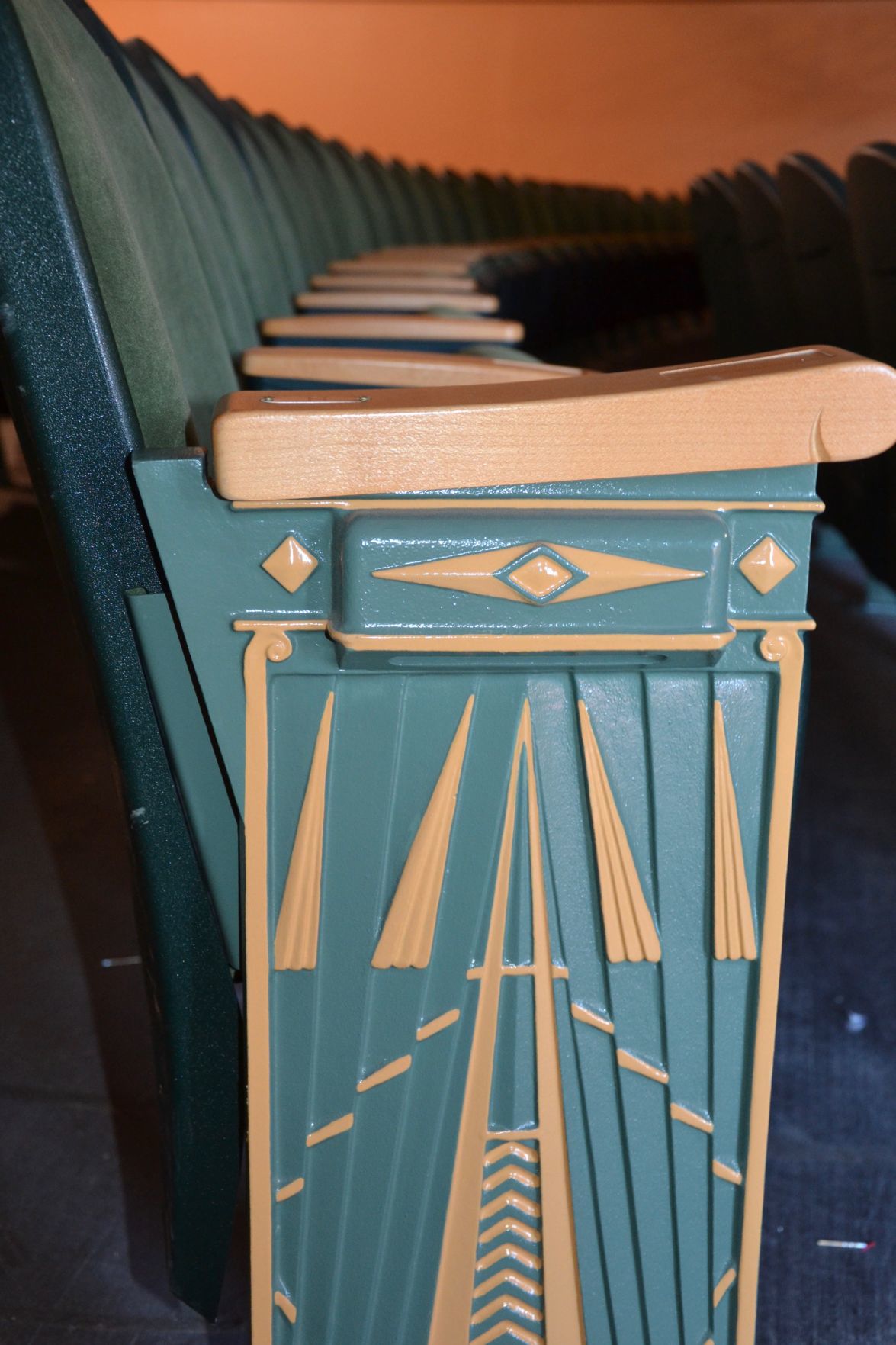 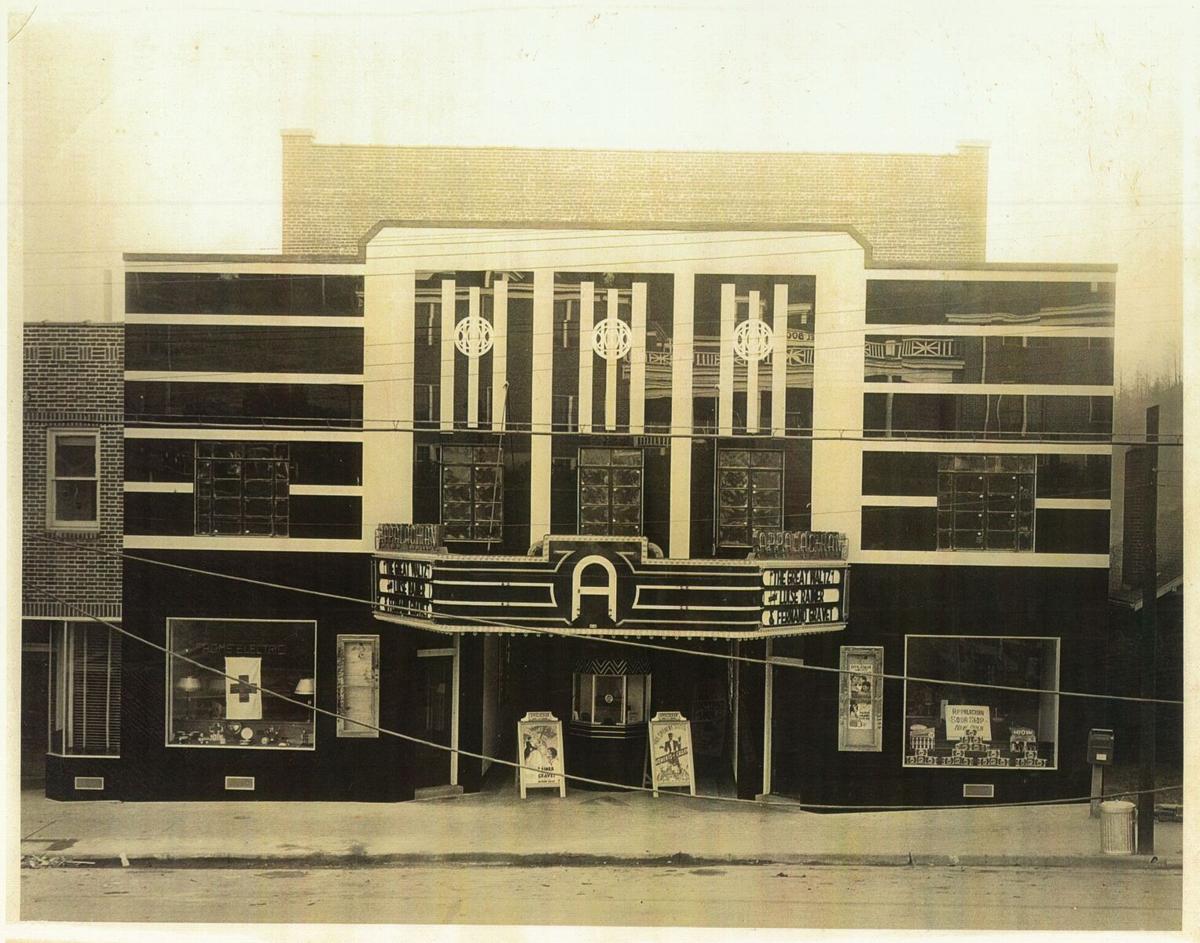 The Appalachian Theatre’s facade is pictured upon opening in November 1938. 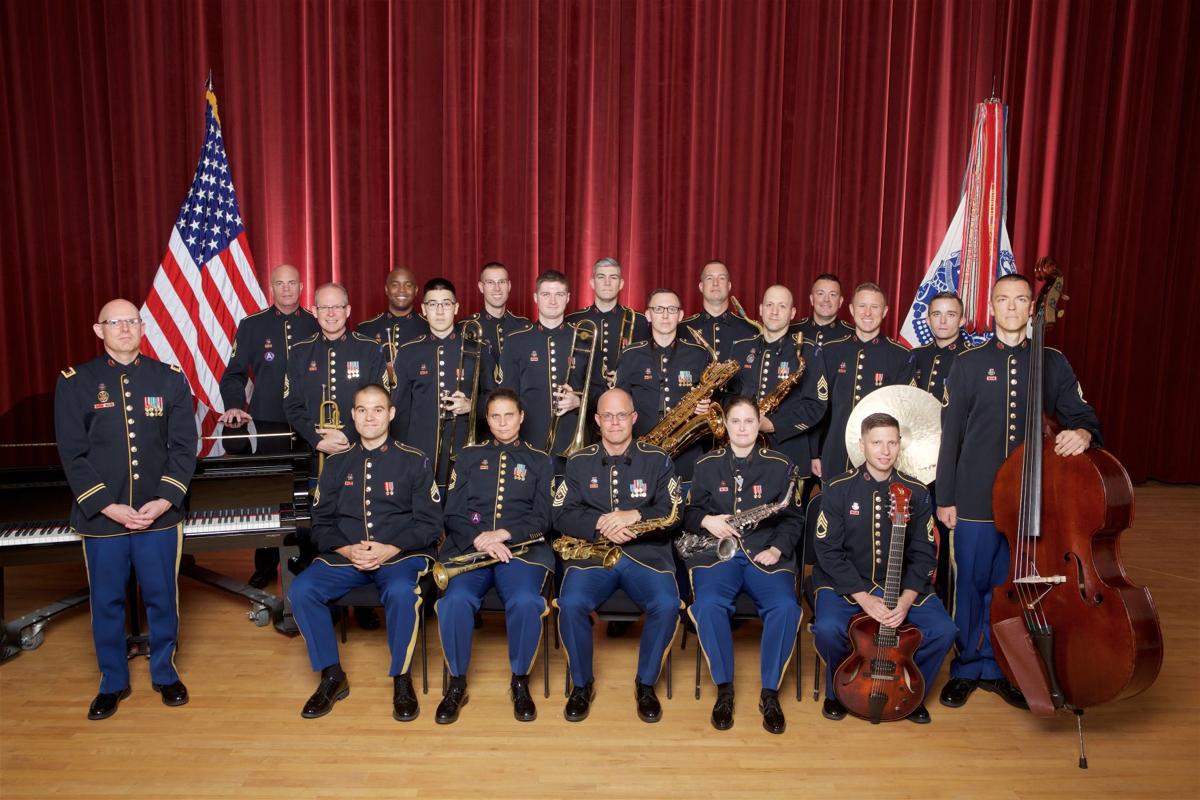 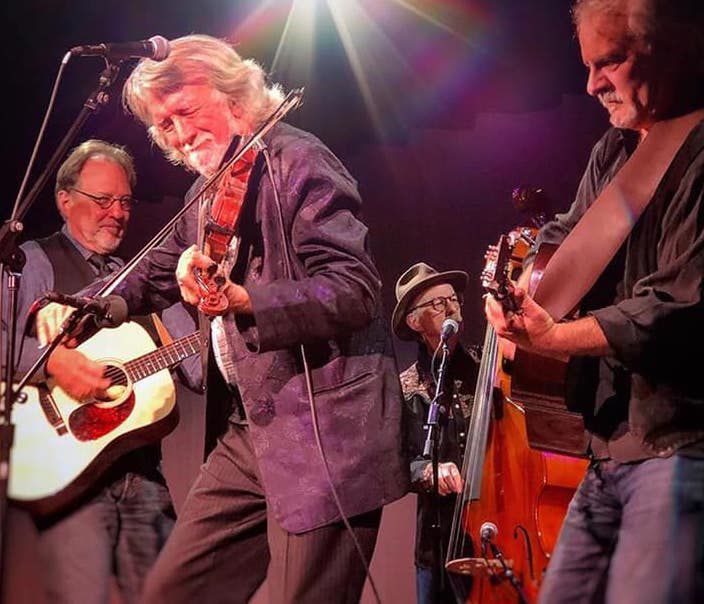 BOONE — The leadership team at the Appalachian Theatre of the High Country announced today that the final phase of construction has been completed and that the newly renovated 1938 landmark will begin operations this month.

The first performance will take place at 7 p.m. on Monday, Oct. 14, when John McEuen, founder of the Nitty Gritty Dirt Band, will be joined by his current band The String Wizards for a concert titled, “Will The Circle Be Unbroken.”

“The name of that event is fortuitous since we’ve now come full circle with this project,” said John Cooper, chair of the theatre’s board of trustees. “What began as the ‘Save The Appalachian Theatre’ task force in December 2011 has grown to involve over 500 volunteers and thousands of community stakeholders, all of whom have given generously of their time, talent and resources to make this dream become a reality.”

Laura Kratt, executive director of the ATHC, has programmed a diverse slate of offerings for the opening weeks of the theatre, designed to show off the venue and its many production capabilities.

“While staying true to the original purpose as a movie theater, we’re showcasing regional and national artists,” Kratt said. In addition to John McEuen, the October schedule includes the Halloween film “Hocus Pocus” on Oct. 25 and 26.

In an effort to thank the community for their continued support, several free events have been programmed during the opening weeks. This Friday, Oct. 4, marks the beginning of a monthlong exhibit at the Jones House on the Appalachian Theatre sponsored by Digital Watauga, the Watauga Historical Society and the Watauga Public Library. A historical lecture by Eric Plaag, chair of Digital Watauga, about “Western Carolina’s Finest Theatre” will be given on Wednesday, Oct. 16, in the theatre.

Also free of charge is a performance by the popular U.S. Army Jazz Ambassadors, a 19-piece ensemble that is the official touring band of the United States Army. They will perform a Big Band concert for the general public on Thursday, Oct. 17.

Additional programming will be announced at least twice each month and will include both community-based events and outside rentals, such as the Appalachian Opera Theatre performing “Die Fledermaus” on Nov. 8 and 10 and the Carolina Snowbelles on Dec. 13 and 14. Kratt said members of the theatre’s email list will be the first persons notified once programs are announced and go on sale.

Tickets to the general public for the first month’s events are only available online at www.apptheatre.org beginning Monday, Oct. 7. For information about phone ticket orders and in person sales, call (828) 865-3000. Note that the theatre’s onsite box office hours are from 11 a.m. to 3 p.m. weekdays and one hour prior to each curtain. The Appalachian Theatre is located at 559 West King St. in downtown Boone, next to the Boone Town Hall.

Kratt said that “visitors to the theatre will see many of the Art Deco features from the 1938 design replicated in all their glory, including the historic façade and original marquee, the signature striping on the vaulted ceiling in the audience chamber, the side panels on the interior walls, the end plates on each row of seats, the pattern of the carpeting, the metallic ceiling tiles in the lobby, etc.”

In addition, Kratt noted that four of the six wall Art Deco lighting sconces from the 1950 post-fire renovation have been located, carefully restored and installed in their original locations. The theatre is asking for assistance from the general public to find the remaining two sconces.

The expanded lobby now includes areas that were formerly occupied by the Appalachian Soda Shop, the Dacus Radio Shop and Lillian Mae Beauty Shop. These spaces have been combined and repurposed with audience comfort in mind to include new, larger restroom facilities, multiple concession stands, convenient elevator access and a box office and patron services area.

A spacious, 1,700-square-foot community room has been added to the theatre in the area above the lobby, which once housed several doctor’s offices, exam rooms and a rental apartment. Kratt says the demand for this space is high as it can accommodate receptions, smaller performing arts events, film screenings, lectures, meetings for groups of 150 or more and sit-down dinners for approximately 90 guests. It can be accessed separately from the main theatre, providing for concurrent events where practicable.

The key feature in the Community Room is a series of historically inspired mural friezes by internationally known artist Brenda Mauney Councill. She specializes in large-scale murals and noted that her designs for the community room are “consistent with the thematic period styles identified as Art Deco and Moderne.”

Audience capacity in the theatre has been reduced from its original 999 seats to 620, with improved sight lines, wider seats, cushioned chairs, more legroom between each row and staggered placement of rows so that patrons look between those located in front of them. Behind the scenes, artists will enjoy an expanded stage area, ample dressing rooms, loading dock and assembly room, service elevator, orchestra pit and technical production booth from which the state-of-the art lighting, sound and projection systems will be operated.

In explaining the Appalachian Theatre’s importance to this community, Cooper said, “It preserves one of the most historic and iconic structures in the High Country and provides a vitally important stage for so many talented folks who live here, and audience members young and old alike. The theatre benefits all of us by providing a performance venue for many forms of entertainment, including film and lectures. The Appalachian is a venue to attract nationally known talent, create jobs, revitalize Boone’s downtown district and serve as a significant economic driver for the region.”

The theatre, which has changed hands several times since it opened in 1938, was acquired in 2013 by a nonprofit entity, the Appalachian Theatre of the High Country, with the intention of restoring the theatre to its original glory days. Now complete, the facility can accommodate hundreds of attractions each season, including live music, theater, opera, film and community activities. These events will result in increased visits to the region with many of these visitors staying in the area overnight, enjoying restaurant meals and shopping in the various retail establishments located in the High Country, the theatre said.

Kratt emphasized that the capital campaign continues in order to reach the final fundraising goal and to create both operating and programming funds. A “Take-A-Seat” effort is underway to outfit and furnish the venue for optimum comfort, with donor recognition given to each participant.

Reflecting on his idea from nearly a decade ago to acquire and renovate the venerable theatre, Cooper said, “Foremost among the many emotions I’m feeling are a sense of gratitude, a feeling of civic pride and heartfelt appreciation to the countless individuals, organizations, board members, elected officials, town and county staff, businesses, corporations, foundations, contractors and vendors who have made this theatre their own personal project. Everyone should take pride in what we’ve accomplished together."

To learn more about the Appalachian Theatre of the High Country, sign up for its mailing list, participate in its “Take-A-Seat” campaign or to contribute to the annual fund, visit the website at www.apptheatre.org.

• Monday, Oct. 14, at 7 p.m., Concert: John McEuen and The String Wizards: Will The Circle Be Unbroken. Grammy award-winning founding member of the Nitty Gritty Dirt Band, McEuen has performed continuously since 1960 and collaborated with everyone from street musicians to Doc Watson, Earl Scruggs, Steve Martin and Levon Helm. Rolling Stone called Will the Circle Be Unbroken “The most important record to come out of Nashville.” McEuen’s show takes us “behind the curtain” of the music world that so many of us know of only as listeners and shows us how we have all been a part of it, more than we may know. This is a $32 ticketed event that goes on sale Monday, Oct. 7.

• Wednesday, Oct. 16, at 5:30 p.m., Lecture: Public historical presentation by Eric Plaag, chair of Digital Watauga, about “Western Carolina’s Finest Theatre.” Sponsored by the Digital Watauga Project, Watauga County Historical Society, Watauga County Public Library and Appalachian Theatre of the High Country, Plaag will present the inside scoop on how the Appalachian got started, how it survived a disastrous fire in 1950 and the advent of television, and how the new theater will once again be the home for both stage and screen performances. This is a free non-ticketed event.

• Friday and Saturday, Oct. 25 and 26, at 7 p.m., Film: “Hocus Pocus.” A curious youngster moves to Salem, where he struggles to fit in before awakening a trio of diabolical witches that were executed in the 17th century. Starring Bette Midler, Sarah Jessica Parker and Kathy Najimy are the three wild witches who return from 17th century Salem for a night of zany fun and comic chaos. Filled with bewitching laughs and magic, this hilarious film is perfect for the whole family. This is a $10 ticketed event that goes on sale Tuesday, Oct. 15.