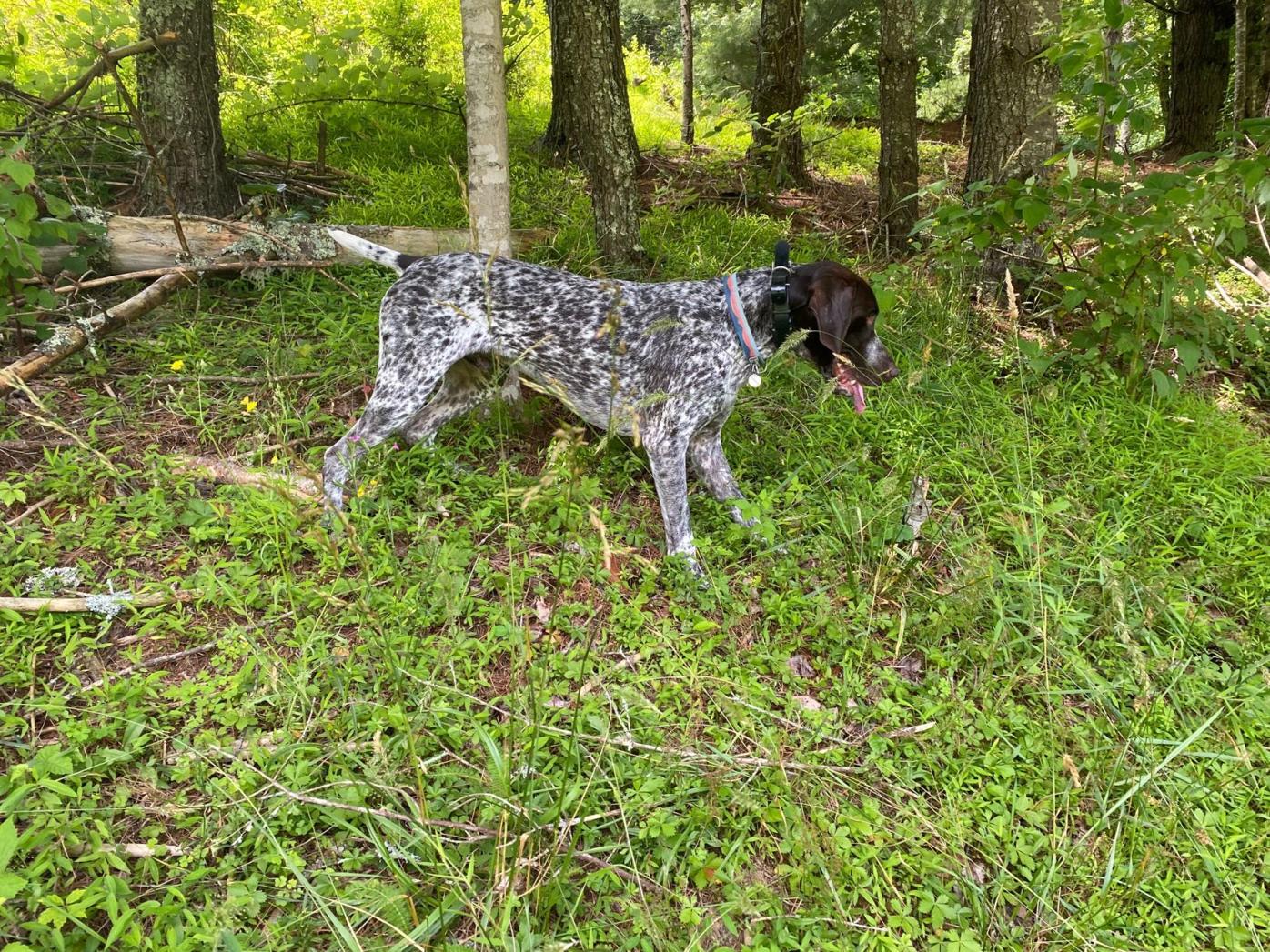 Darwin detects a hide filled with bee wax hidden on the ground in the forest. 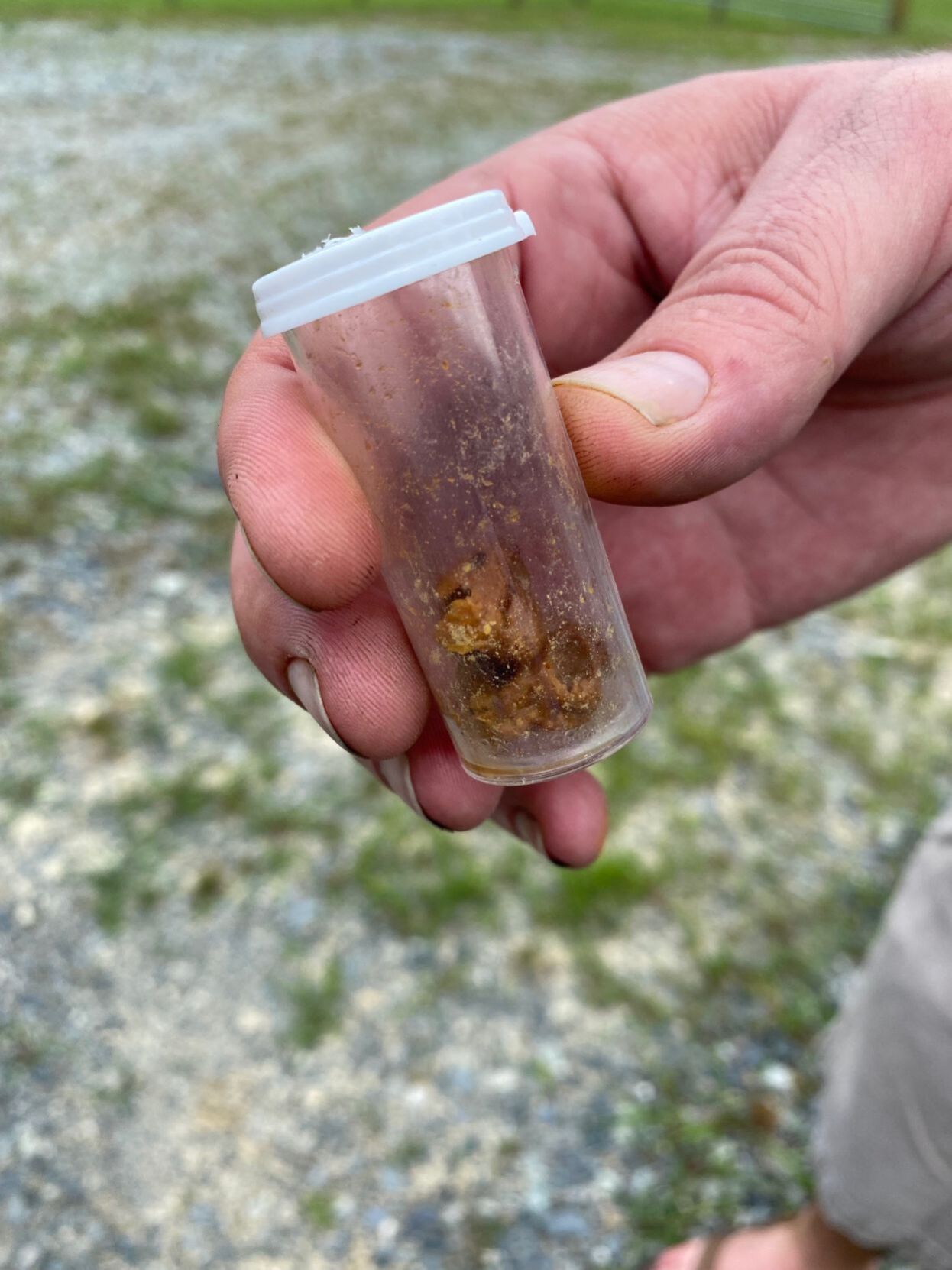 To train Darwin to detect bee nests, Staab uses small plastic tubes filled with bumblebee nesting materials such as wax and nectar for him to find.

Darwin detects a hide filled with bee wax hidden on the ground in the forest.

To train Darwin to detect bee nests, Staab uses small plastic tubes filled with bumblebee nesting materials such as wax and nectar for him to find.

HIGH COUNTRY — Not many people leap out of their cars to get to work, but for Darwin, a two-year-old German shorthaired pointer, it is a regular Wednesday.

His owner Jacqueline Staab, a graduate student at Appalachian State University working toward her masters degree in evolutionary biology, is training Darwin as the United States’ first conservation detection dog to specialize in finding bumblebees.

Operating her own sustainable farm for two years in Richlands, N.C., Staab said she is “really into bugs.” At Appalachian State University, she said she works in the “Geib Lab,” a lab run by Dr. Jennifer C. Geib. One of their most recent accomplishments, Staab said, was the discovery of a new species of bumblebee.

Researching bumblebees is a critically important line of work. “I just really wanted to help conserve pollinators,” she said.

Staab explained that one-third of bumblebee species populations are in decline from causes such as habitat loss, rain changes and climate change, and they have a far-reaching impact on the environment.

“Bumblebees are efficient pollinators in high elevations and high altitudes,” Staab explained, which makes bumblebees some of nature’s most efficient and impressive pollinators. They are heavier and more hairy than other types of bees, making them more durable. Moreover, Staab said bumblebees can also forage in low light conditions and in worse weather in comparison to many other pollinators.

Leaning down toward a patch of clover, Staab can look at the color patterns on a bumblebee and hazard a well-educated guess as to its species, a skill honed after significant practice working with the bees. Despite how much research is being done about bumbeless, Staab said there is still much scientists do not know about them, particularly about how bumblebees nest. Darwin will help Staab and future researchers find bumblebee nests and learn more about their nesting habits and preferences and how these vary by species. Staab said that learning about nesting across species is important because bumblebee species diversity is linked to floral diversity and thus conserving across species is a major goal for her research.

To detect bumblebee nests, Darwin was trained to be a detection dog, such as those used by law enforcement. The idea to train a dog to do this job, Staab said, came from reading about a similar project done in England. According to Staab, Amber Siebson at Highland Canine in Statesville trained Darwin so that he would be certified as a detection dog.

“It was difficult to find a dog with the right temperament. Detection dogs need to have a certain temperament,” Staab said.

After looking at many rescues, Staab began doing research into different breeds and chose the German shorthaired pointer, a dog typically used for hunting and which is known for keeping their noises low to the ground. Darwin, Staab said, descends from detection dogs: one of his relatives is a cadaver detection dog with the NYPD. Using Darwin’s skills, Staab is developing a novel methodology for training conservation detection dogs to find bumblebees.

By yelling “Search!” Staab commanded Darwin to look for “hides,” small plastic tubes filled with bumblebee nesting materials such as wax and nectar and sometimes bumblebee feces, which her fiancé hid earlier that day. Darwin careened between trees, sometimes circling back to where he had come from, until he paused, tail rigid, in the pointing position toward where he believed the hide to be. Staab yelled “Good boy!” to Darwin, saying that, “It’s all just a big game to him. We trained him with positive reinforcement.”

The many hours of contact and playing with the scent material are important for dogs to associate the scent with playing, according to Staab. Once Staab picked up the hide, she tossed a tennis ball into the field for Darwin, both a reward and a sign for him to stop searching.

“We’re working on improving his height,” Staab said. “Right now Darwin can find hides up to about waist level,” she explained. Bumblebees, Staab said, are opportunistic nesters, meaning that they will nest in the ground, in trees or inside any structure where they can find protection, dry soil and have floral resources nearby.

“The first step in any detection dog’s training is to imprint them on a smell,” Staab said. To do so, she said, “We put (the nesting material) in a PVC pipe with holes drilled into it and we put the nesting material inside, and then we just played fetch.”

Staab said that preparing the hides for Darwin is a scientific process. For Darwin to be able to identify bumblebee nests, she must ensure that he is not learning to detect the smell of the plastic tubes or even the smell of the person who assembled the hide.

While detecting nesting materials in hides is good practice, Staab said that Darwin also needs practice on real bumblebee nests. She said that she hopes Darwin can be a tool to educate the public about bumblebees and that she and Darwin can engage the local community by asking for individuals who find bumblebee nests on their property to call her.

At only two years old, Darwin still has much to learn. Staab is confident in Darwin’s potential, however, and looking forward to seeing him progress.

“He’s my best friend, we do everything together,” she said.

The relationship between the detecting dog and trainer is imperative to success, Staab said, and she concluded that she is excited to continue her work with Darwin to conserve bumblebees.