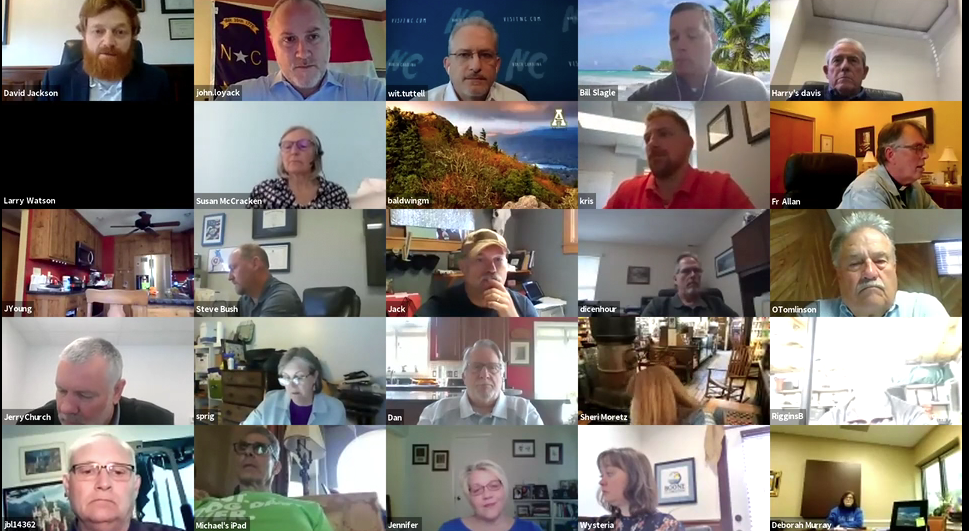 President and CEO of the Boone Chamber of Commerce David Jackson hosts a local economic webinar on April 28 with panelists from the EDPNC and Visit NC. 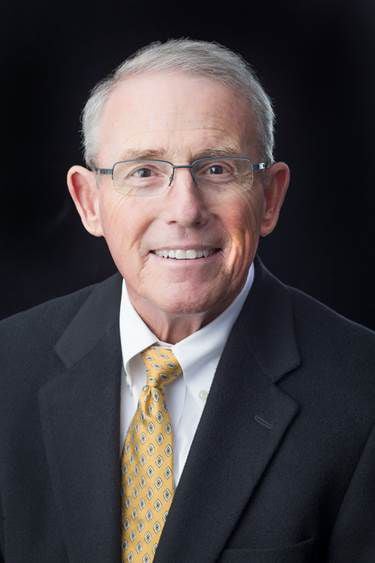 President and CEO of the Boone Chamber of Commerce David Jackson hosts a local economic webinar on April 28 with panelists from the EDPNC and Visit NC.

The Boone Area Chamber of Commerce hosted an online webinar April 28 with local and state experts to discuss what residents can expect as the economy begins to reopen.

The panel of three featured speakers addressed concerns from a number of perspectives, including small businesses and tourism.

In January, local economist Harry Davis, who for 11 years has addressed local chambers of commerce to provide a forecast of the economy for the upcoming year, reported that there was “not a recession in sight” for 2020. However, on April 28, Davis said that “about six weeks” after his forecast, “everything came to a halt.”

“It’s been easy to be an economist during the past 10 years. The economy was in recovery every year — the numbers got a little better … and improved every month or every quarter,” Davis said. “We have about 27 million people in the U.S. that are presently unemployed. We lost about 22 million jobs in three weeks — that wiped out all of the job gains that we’ve had since the Great Recession. So, in three weeks, we wiped out all of the job gains from a 10-year period.”

Despite this, “it’s not quite as bad at it sounds,” because many of those people who have filed for unemployment will go back to work as the economy begins to open back up, according to Davis.

Davis also noted that a number of aspects of the economy, such as the housing market, consumer spending and manufacturing — which “in the latest month has dropped by the most since 1946 at the end of WWII” — are dampened during economically stressful times like the COVID-19 pandemic.

Debt accrued from COVID-19 response this year “is going to approach $5 trillion” federally and is expected to surpass the nation’s gross domestic product by October 2020, according to Davis. For the second quarter of the year, Davis said that “GDP will be way down by 30-40 percent.”

“For the year, GDP can be expected to be down 5-9 percent, which would be a huge drop for the whole year,” Davis said.

To get the economy back on track, Davis said there are a number of things that need to be put in place by the national government, including fiscal policies, which include bills and programs such as the CARES Act and the Paycheck Protection Program.

“We’re up to about $2.7 trillion in physical stimulus,” Davis said, calling some of that “helicopter money,” which means it’s distributed to U.S. citizens freely in order to stimulate the economy. There was about $600 billion allocated to help small businesses, specifically, including the bill that passed on April 27.

Davis said that the ultimate question remains as to when the financial hardships for small business will pass, noting that the financial relief that has already been distributed was to provide support for two months “during initial shutdowns.”

“The key is what’s going to happen in two months if they don’t get to reopen,” Davis said.

The actions of the Federal Reserve are also important in ensuring a smooth transition to an open, healthy economy, he said.

“The Federal Reserve is doing everything that it can to help bring back the economy once we start reducing the restrictions. They’re doing that by increasing the money supply, lowering interest rates and buying back government securities by about $15 billion per day,” Davis said.

Additionally, Davis said that the key to the economy’s comeback is “whether the recovery will be ‘V’ shaped or ‘U’ shaped,” which will be determined by time, science and the experience of professional health care workers.

“We will get over this,” Davis said, noting that he believes the return will be ‘U’ shaped. “We are in a recession right now, and it’s going to remain for the rest of the year and maybe into next year.”

As a note on the state economy and budget, Davis said that “it all comes down to what the federal government is going to do.”

The EDPNC focuses on helping businesses establish themselves in North Carolina and offers guidance for businesses trying to secure assistance during the pandemic.

“We’ve been working with the SBA and FEMA to get funds to businesses in impacted communities,” said Loyack. He also said that disaster funding is a focus of the EDPNC and has been for a number of years; the organization is known to aid businesses suffering from hurricanes, tornados and other natural disasters.

There are also local efforts to support community businesses, Loyack mentioned, including the “Ashe County Business Support Fund and the Rock United Relief Fund” out of Blowing Rock.

Loyack also warned panel attendees to be aware of scams associated with the COVID-19 pandemic and its relief responses.

“Lean on local partners,” Loyack said to small business owners, which includes the Boone Area Chamber of Commerce and banks with branches in the area.

Several resources are available for small business owners seeking financial assistance or situational guidance on the EDPNC website at https://edpnc.com.

Wit Tuttle, vice president of Visit NC, addressed specific concerns about North Carolina’s reopening and the state of its tourism industry, which is a $25 billion industry, according to Tuttle. The industry provides more than 230,000 jobs, $1.3 billion in state tax revenue and $775 million in local tax revenue.

The magnitude and suddenness of COVID-19 shutdowns, which has left 65 percent of the leisure and hospitality employees unemployed, according to Loyack, can’t even be compared to the ’08 and ’09 Great Recession because the current percentage of unemployment across the state is exponentially greater than it was nearly a decade ago.

Tuttle said that tourism will not begin picking back up “until people can see past” the pandemic and “begin thinking about travel again,” but the return to a “new normal” will look very different from the tourism the High Country has seen before.

“We’re already starting to see people pushing their trips into the fall. We really hoped that we could save the summer, but I don’t think we’ll start to see an uptick in travel around mid-June, and the most of it will be in the fall, which I think will help the mountain communities that see an uptick in visitors during the fall anyway,” said Tuttle.

Regardless, Tuttle said that the majority of people will be traveling in-state and not getting on an airplane, which “is a good thing for North Carolina,” since the first trips that individuals plan to take when travel begins again include “the beach and the mountains.”

“They want our natural scenic landmarks, historic cities and towns, and not to be in crowded areas,” Tuttle said.

Visit NC’s plan for attracting visitors to the state is to continue supporting small businesses that bring them in, advertising highlights within the state and “letting North Carolina bring you back” to people and places visitors love.

Additional information from the Boone Chamber of Commerce about local efforts and aid is located at www.boonechamber.com.