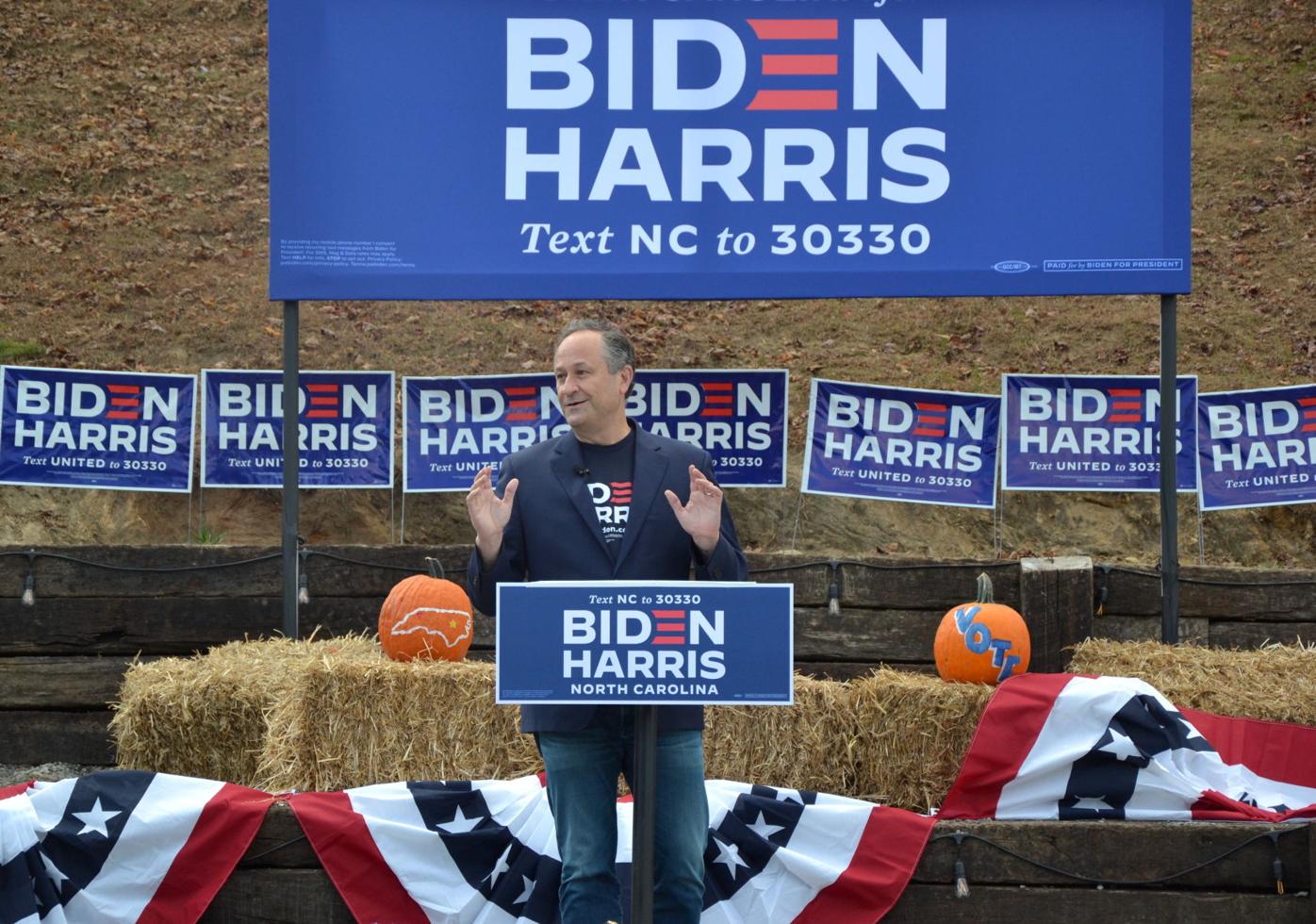 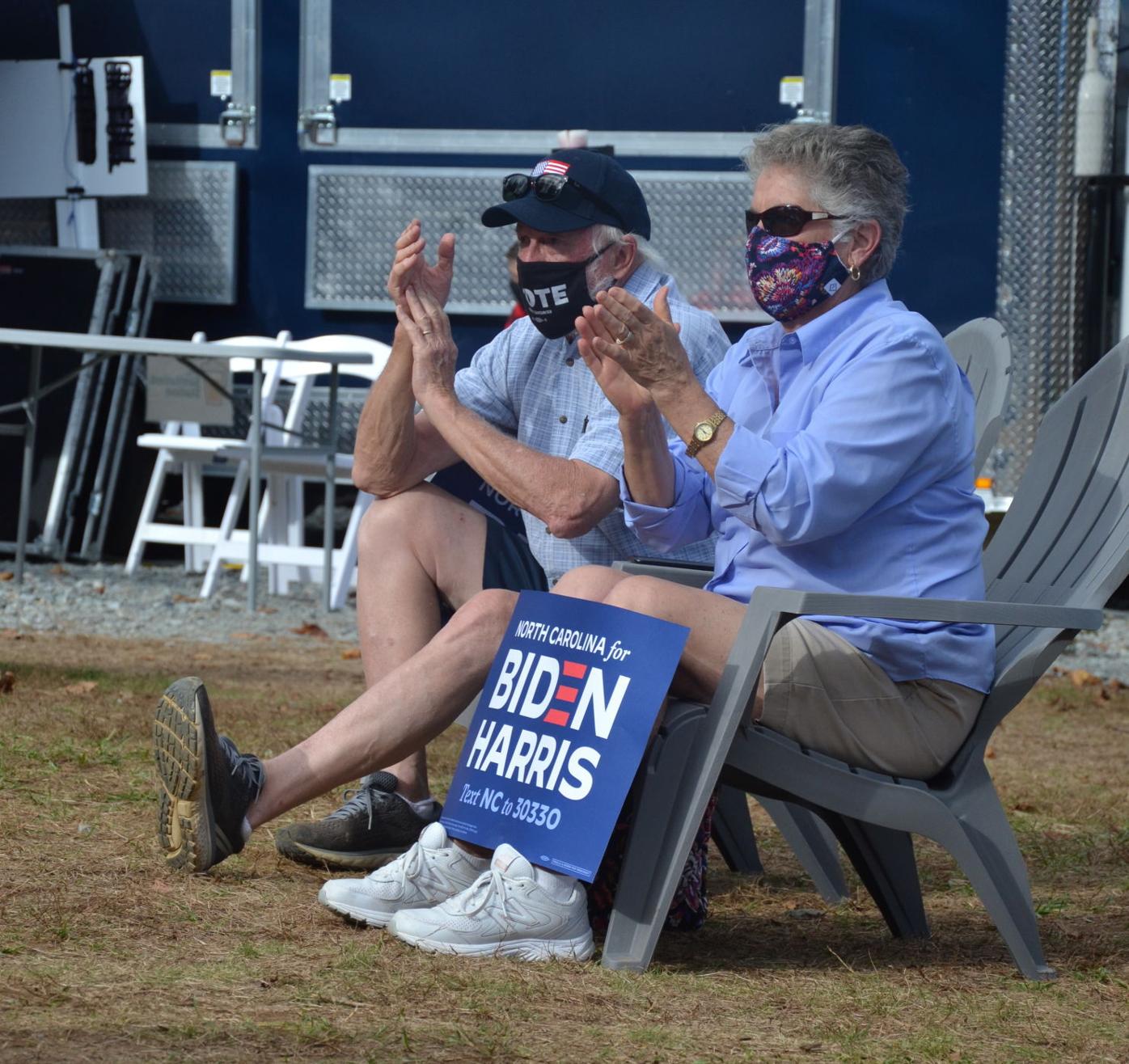 Stuart Tugman and Edie Tugman clap along with others during an Oct. 26 campaign event for Joe Biden and Kamala Harris. 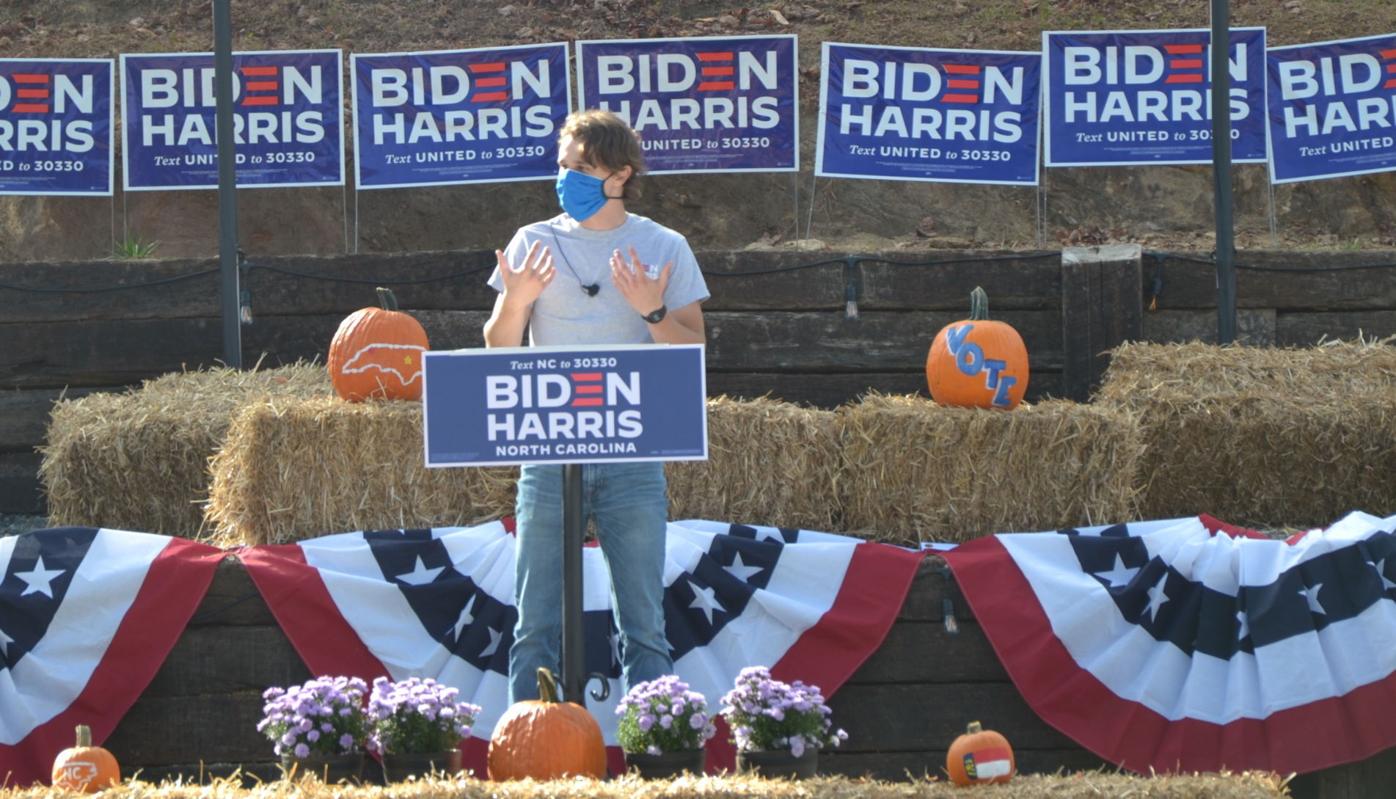 Joe Wiswell, the field organizer for the N.C. Democratic Party for Watauga and Ashe counties, speaks to a crowd in Boone on Oct. 26. 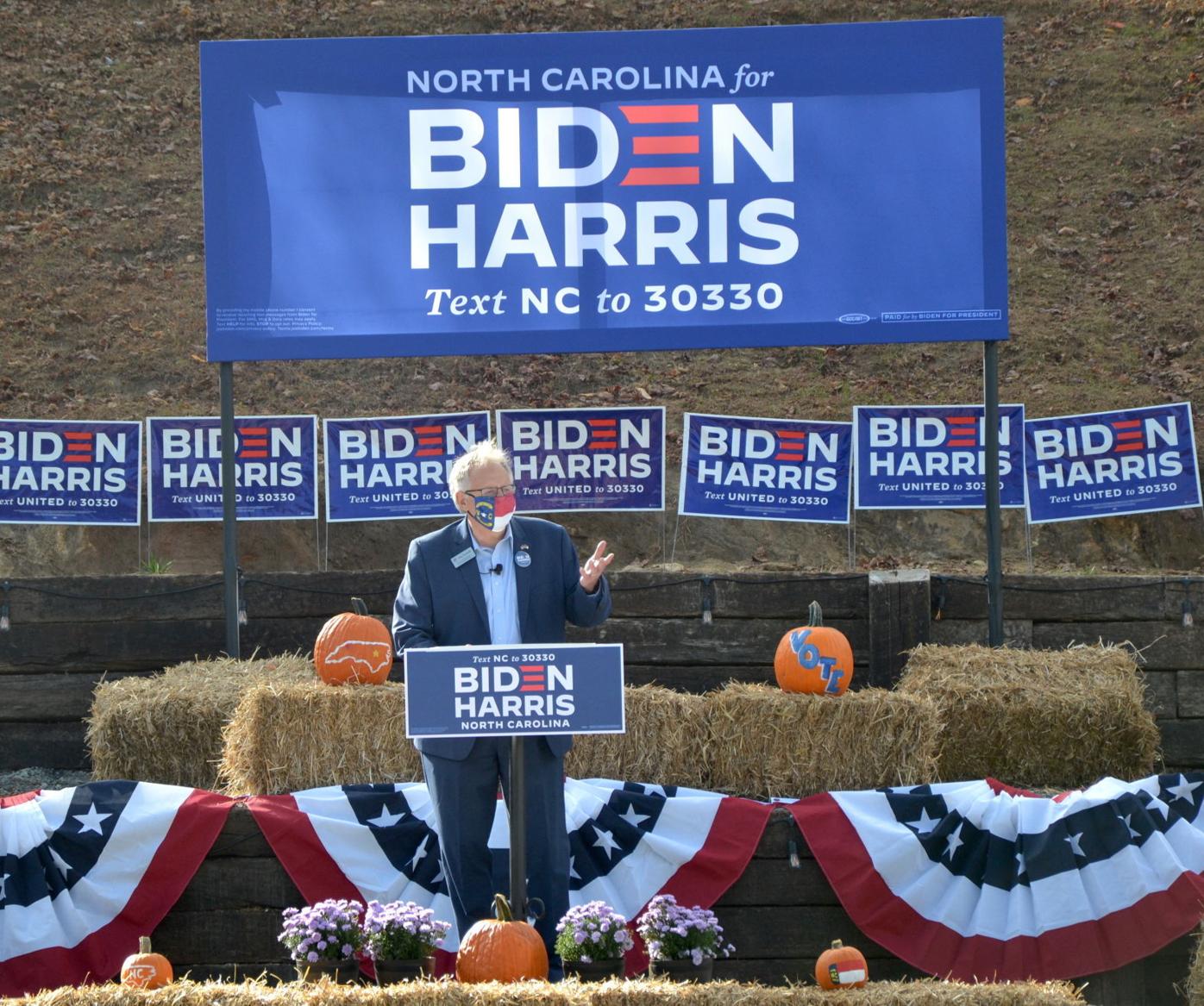 N.C. Rep. Ray Russell (D-Boone) tells attendees of an Oct. 26 event to make sure to vote in this upcoming election. 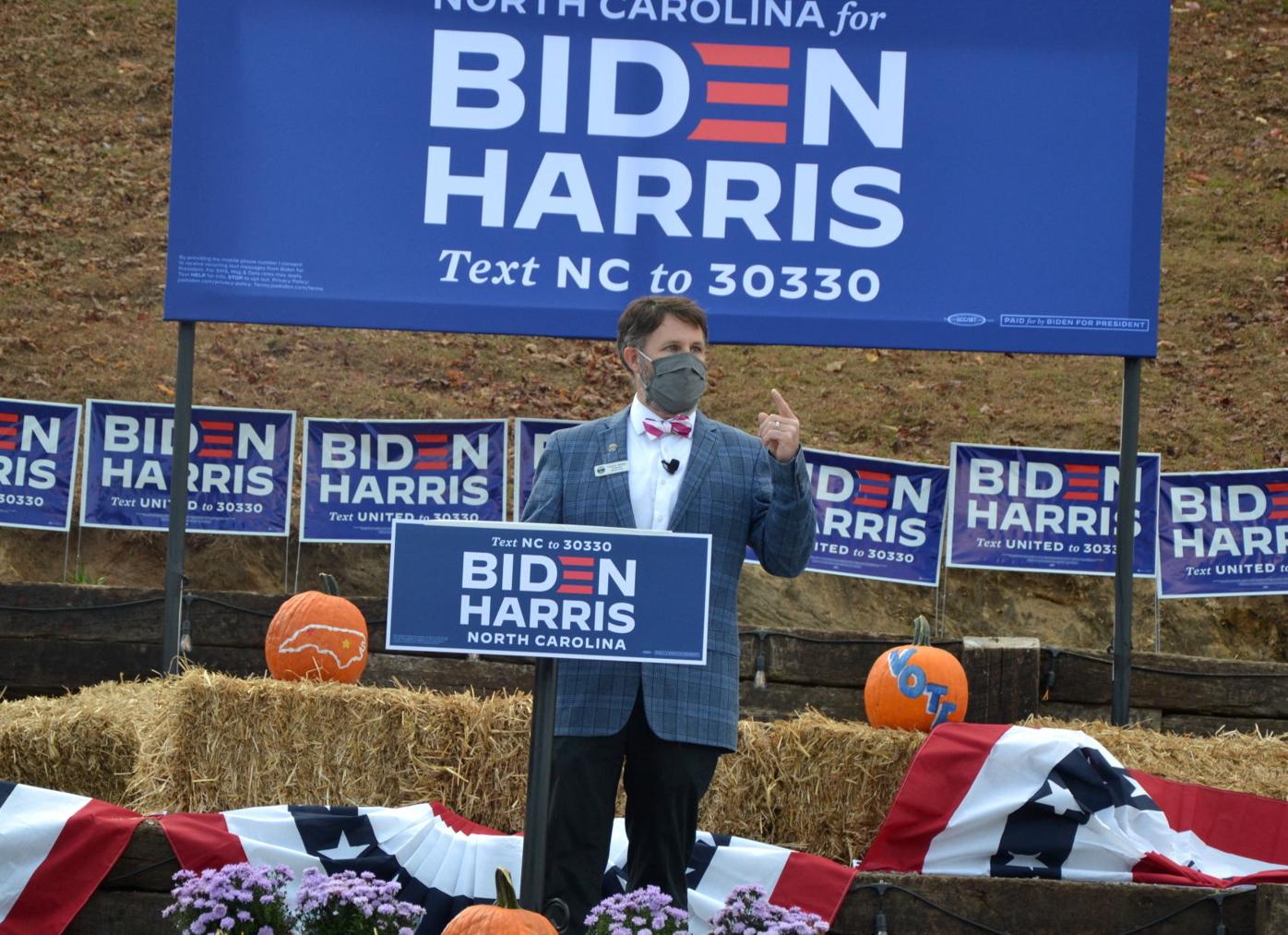 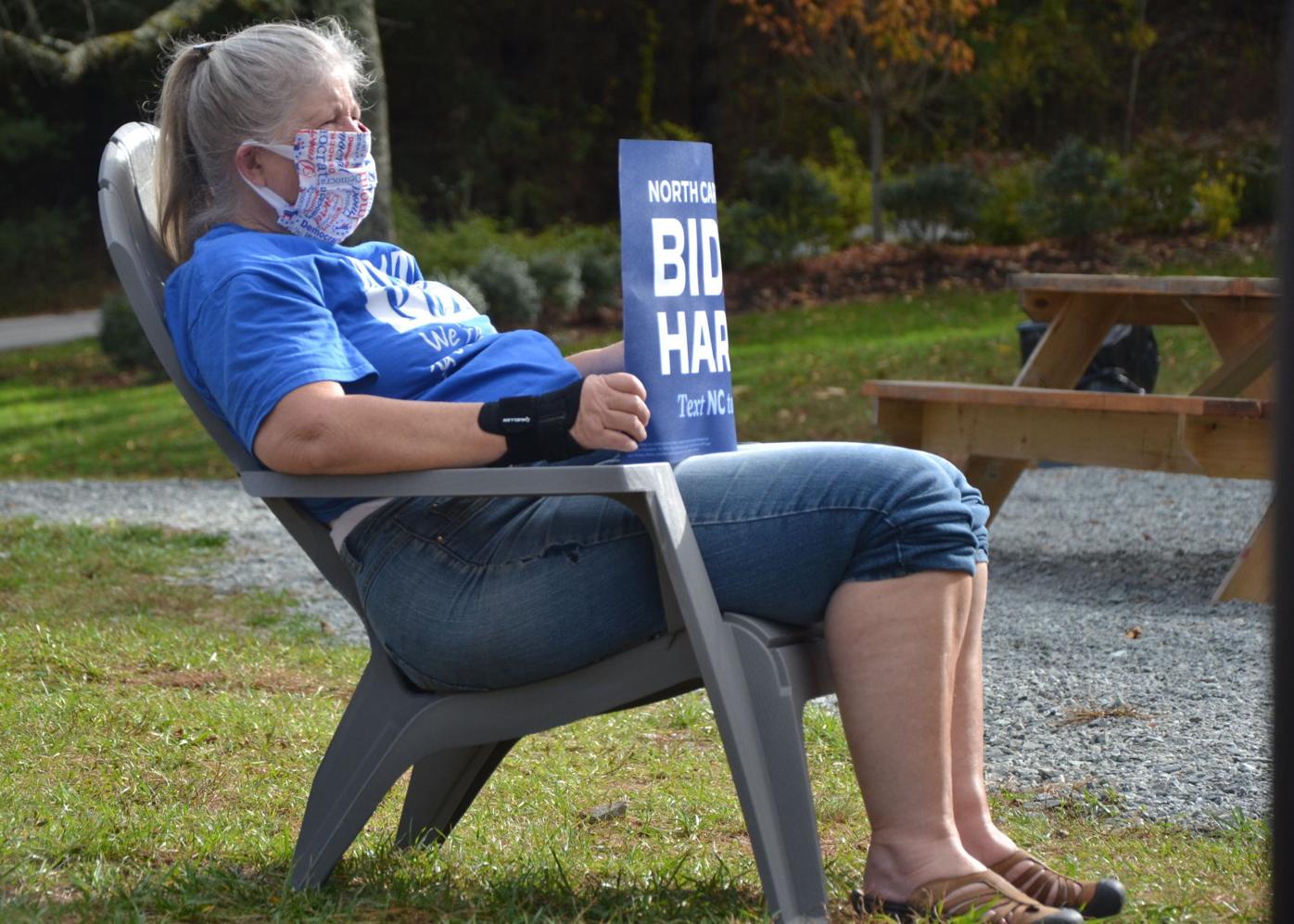 Community members were invited to attend the event at Booneshine Brewing Company in a socially distanced format. Emhoff stopped at several locations in Winston-Salem prior to arriving in Boone.

Representatives for the Biden campaign and President Donald Trump’s re-election campaign have made frequent visits to North Carolina, considered a battleground state in the presidential election.

According to event organizers, more than 3.1 million North Carolinians had cast their ballots as of Oct. 25. Joe Wiswell, the field organizer for the N.C. Democratic Party for Watauga and Ashe counties, called on those in attendance to help make phone calls, hand out campaign materials and knock on doors in a limited capacity to help get Democrats elected “up and down the ballot.” Emhoff said people around the country are getting “fired up” for this upcoming election.

“They’re doing what they did not do and wish they had done in 2016,” Emhoff said. “The common refrain I hear from everyone … is we don’t want to wake up on Nov. 4 and feel like we could’ve done more. A lot of people in 2016 just couldn’t believe this guy could win. Maybe they didn’t vote, organize, knock on doors and make phone calls; well that’s not happening now.”

Emhoff discussed topics such as climate change, focusing on jobs instead of wealth, the handling of COVID-19, health care and investing in education. He added that Biden and Harris want to focus on areas that are “absent” in the current administration — compassion, empathy, caring, listening and focusing on people outside of oneself.

Emhoff endorsed Biden, saying that he thinks Biden is a man of honor and dignity who has devoted his life to public service. He said his wife, Harris, is an inspiration as a daughter of immigrants and a “product of the American dream.”

Running for re-election against Republican Ray Pickett of Blowing Rock, N.C. Rep. Ray Russell (D-Boone) said to attendees that it’s surreal when candidates see their name on a ballot. But he said it’s the names of community members that are on the ballot, as this election is about health care, education, climate change and the COVID-19 pandemic.

“Our lives are on the ballot,” Russell said.

Russell recalled a 2017 election in Virginia when the decision between two candidates for the House of Delegates came to a split 50-50 vote. Each candidate received the same number of ballots. According to National Public Radio, a decision was reached after both names were written on a piece of paper and put into a bowl — the Republican candidate’s name was drawn and was declared the winner.

“I think about that one vote every single day. What can I do to get that last vote? That’s what we have to think about and the motivation we’ve got to have,” Russell said. “When we finish this election, whether we win or lose, we have to make sure we’ve done everything we can to win this for the North Carolina elections and all the way to the top of the ticket to Joe Biden and Kamala Harris. It’s too important to leave anything to chance.”

The crowd also heard from County Commissioner Charlie Wallin, who is also running for re-election for the Watauga County Board of Commission District 5 seat against Republican Bart Keller. Wallin said he had thought back in the 1990s when he was first voting for Bill Clinton that it was the most important election. He said that now he thinks the 2020 election is when the community needs every single person at the polls.