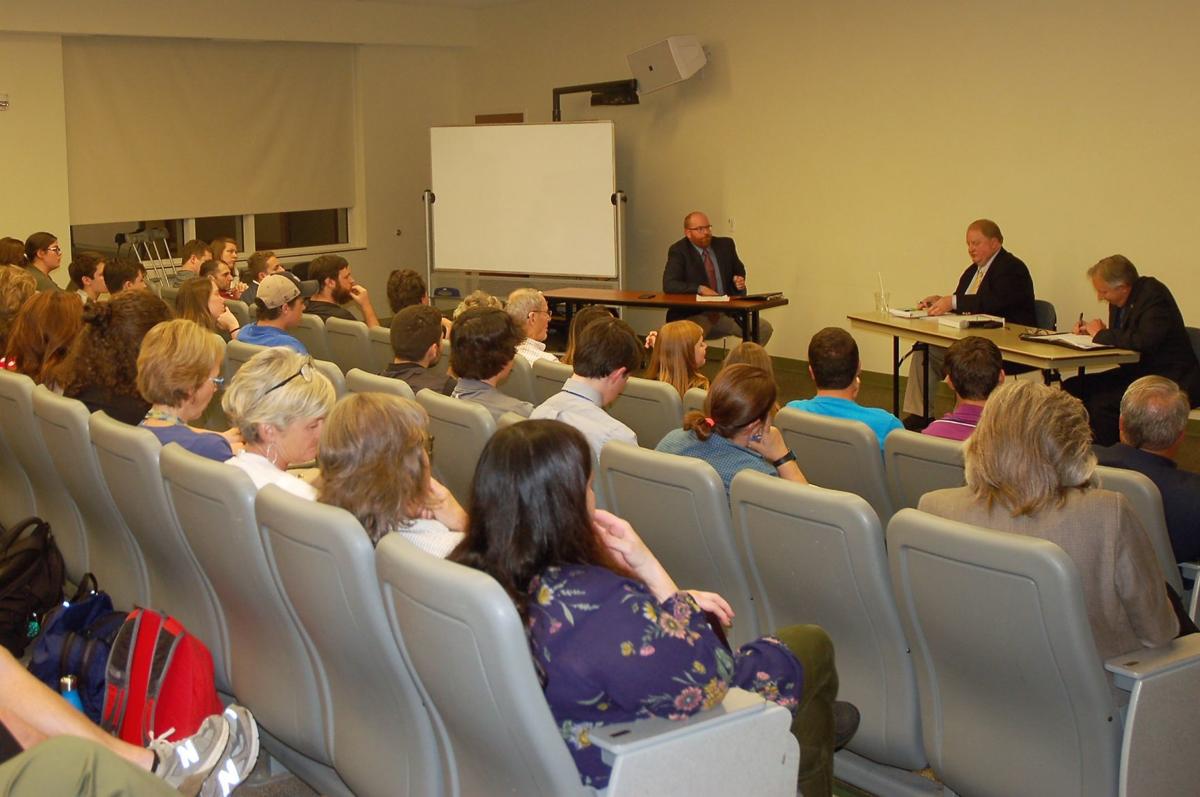 The crowd watches as Rep. Jonathan Jordan, second from right, gives a response during his debate with Ray Russell, far right, as moderator Williams Hicks, center, watches on.

Each of the 120 seats in Room 114 at the Belk Library on the campus of Appalachian State University was filled, with many more sitting on the floor.

The crowd watches as Rep. Jonathan Jordan, second from right, gives a response during his debate with Ray Russell, far right, as moderator Williams Hicks, center, watches on.

Each of the 120 seats in Room 114 at the Belk Library on the campus of Appalachian State University was filled, with many more sitting on the floor.

BOONE — In front of an overflow crowd at Appalachian State’s Belk Library, N.C. House District 93 (Ashe and Watauga counties) candidates Jonathan Jordan and Ray Russell spent an hour debating issues such as education, taxes, the opioid crisis and much more on Tuesday night.

The event was moderated by William Hicks, an assistant professor of political science at ASU.

Jordan, a Republican from Jefferson in his fourth consecutive term, said his Raleigh record speaks for itself.

“We have increased all across the board, everything that you can think of, from teacher pay, from spending on education, from economic development statistics, from where we are in rankings for job creators to relocate to North Carolina,” Jordan told the crowd. “I’m honored to reapply for a fifth term.”

Russell, a Democrat from Boone who is a computer science professor at ASU and founder of Ray’s Weather Center, said he wants to spend the last third of his life serving northwest North Carolina.

“I was an unaffiliated voter until a year and a half ago, after the last election was so horrible that I decided that I would run to change the tone of elections and change the tone of politics,” Russell said, referencing the 2016 presidential election.

On the topic of education, Jordan said the Republican-led state legislature has increased teacher pay five consecutive times and converted school resources to digital, among other improvements.

“Just this year, 2017, we put $700 million additional funds into education,” he said. “We are continuing to increase funding in our classrooms as opposed to central administration.”

Russell retorted that what Jordan had said regarding education funding is “smoke and mirrors,” saying what’s big is small and what’s small is big.

Russell said that Republicans turned down a bond referendum that would have helped the $8.1 billion backlog in school maintenance repairs.

When asked about school safety, both candidates said that it’s a shame that it is an issue. Russell focused on mental health, having more school resource officers, psychologists and nurses in schools. Jordan talked about the House select committee that he is on and on how counties need to design schools to be safer, as well as having SROs in every school.

“I would be in favor of a bond to build school facilities,” Jordan said. “Here in Watauga, for example, there’s $100 million in backlog and instead of doing other projects like the commissioners have done, I think we need to put that toward protecting our students.”

On Medicaid expansion, Jordan was opposed to adding “500,000 able-bodied, childless adults” to the program, saying it would cost $6 billion between 2020-2030 and put traditional programs at risk.

Russell said that when talking to both Watauga Medical Center and Ashe Memorial Hospital, “point blank, 100 percent said yes,” as well as the local health care clinics. Russell called the decision to not expand Medicaid “unconscionable.”

When asked about the opioid crisis, Russell brought up Medicaid as a potential solution while Jordan focused on reducing supply and accessibility.

On the issue of the voter ID state constitutional amendment question on this year’s ballot, Russell called it “a solution for a problem we don’t have” and said there’s never been any specific evidence of widespread voter fraud.

Jordan said he was “absolutely” in favor and blamed the “activist courts” for getting involved and ruling a 2013 state law unconstitutional.

“The reason we don’t hear of voter fraud is because it’s too easy; all you need is a name and an address,” Jordan said.

On taxes and whether North Carolina should have a sliding scale on taxes, Jordan defended the current 5.5 percent flat income tax he voted for, saying he didn’t believe someone should pay more just because they make more.

“We have budget surpluses every year with lowered taxes,” Jordan said. “We’re doing well with 5.5 percent.”

Russell said the proposed state constitutional amendment to lower the potential income tax cap from 10 percent to 7 percent is “deceptive” since it gives voters the idea that their taxes are about to go down. Russell didn’t express a particular opinion on flat versus progressive tax, but did say that according to the state legislative Fiscal Research Division, the Republican tax cuts will amount to a $1 billion revenue loss by 2022.

Russell compared the Republicans taking credit for the state of the economy to floating down the New River on an inner tube and thinking you got from one place to another because of what you do — rather than crediting the stream.

When asked about statewide tax laws on out-of-state internet sales, Russell brought up his background in computer science and how that could help combat the “unfair system” as he called it that gives out-of-state businesses an advantage. Russell also said that sales taxes were “regressive” and thought the corporate tax rate going down won’t help businesses hire new employees.

Jordan said that lowering the income tax and lower corporate tax rates do help jobs come to North Carolina, and broadening the sales tax base will help as well.

“If we get to the point where we have no income tax, our economy is going to boom so much that we won’t have to worry about jobs or tax revenues — we’re already getting surpluses from our base,” Jordan said.

The final question had to do with the legacy of HB2, the infamous bill that required people go to the bathroom of their biological sex rather than the gender to which they identify.

Jordan decried the “out-of-control municipalities” such as Charlotte for bringing up the issues, saying he doesn’t want his daughter in a changing room with a biological male.

“I would vote for it again,” Jordan said.

Russell told a story about going to the restroom and seeing a transgender student who was embarrassed to be there. He also noted how much it cost the state in litigation and job loss, according to the AP.

“There’s no reason for the state to tell people where to go to the bathroom,” Russell said.

In his closing statement, Jordan talked about his record, the state surplus, tax reductions and job growth.

“My record is one of tremendous improvement for North Carolina,” Jordan said.

Russell discussed growing up in middle Tennessee and how he moved to North Carolina in 1991 because the funding model and universities were better.

The short version is-- Ray was prepared, Jordan was not. And Ray is prepared to serve Ashe and Watauga counties as our next representative.

We forcasted that Ray would shine in the debate!