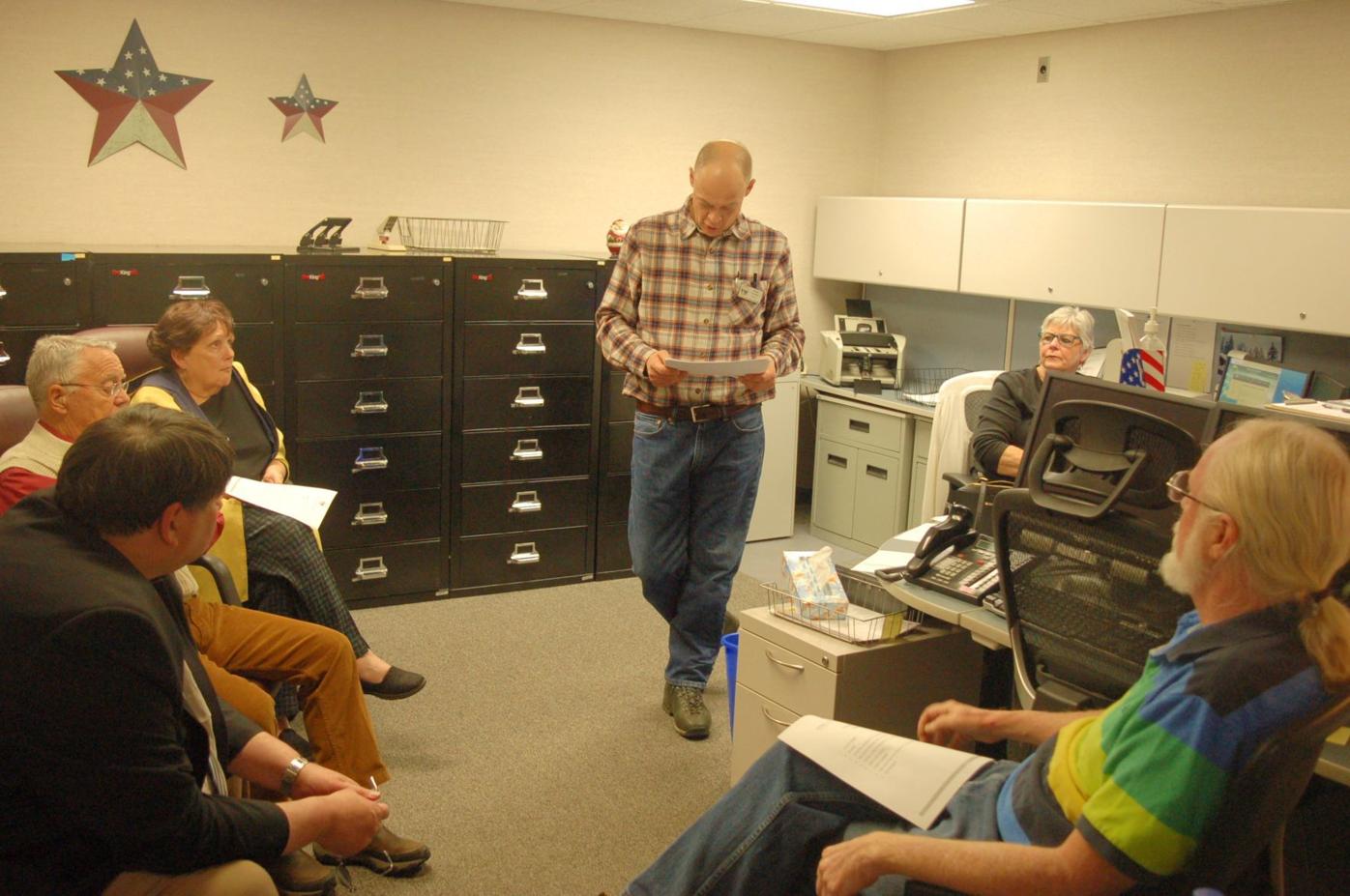 The Watauga County Board of Elections meets in its office on Tuesday, Dec. 10. From left to right are board member Marv Williamsen, board member Eric Eller, board Chair Jane Ann Hodges, Director Matthew Snyder, office employee Debbie Hartley and board member Matthew Walpole. 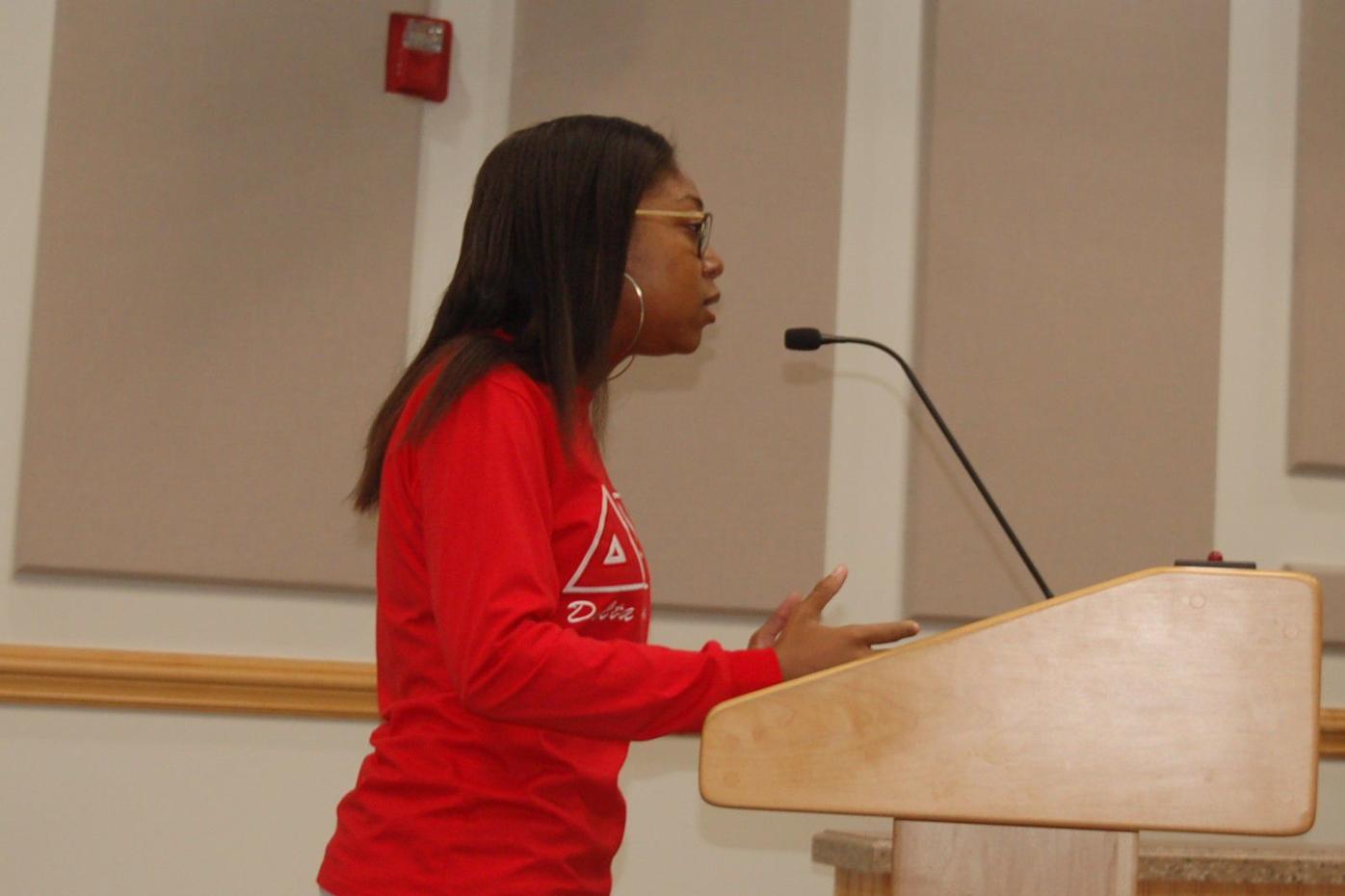 President of the Appalachian Social Justice Educators Corbin Cummings speaks to the Watauga County Board of Elections on Monday, Dec. 9.

The Watauga County Board of Elections meets in its office on Tuesday, Dec. 10. From left to right are board member Marv Williamsen, board member Eric Eller, board Chair Jane Ann Hodges, Director Matthew Snyder, office employee Debbie Hartley and board member Matthew Walpole.

President of the Appalachian Social Justice Educators Corbin Cummings speaks to the Watauga County Board of Elections on Monday, Dec. 9.

BOONE — After two meetings in two days and a contentious back-and-forth for which board members later apologized, the Watauga County Board of Elections voted to unanimously approve seven one-stop sites for the February early-voting period ahead of the 2020 N.C. primaries, adding a new site in the Foscoe community.

On Dec. 9, two early voting plans were presented. The first plan presented by board Chair Jane Ann Hodges called for eliminating the early-voting sites at the Deep Gap Fire Department and the Meat Camp Fire Department, while creating one early-voting site for both communities in the Perkinsville area of eastern Boone. The proposed location for this new site would have been the Cornerstone Summit Church location at 1100 E. King St.

Hodges said that “even with both parties’ encouragement,” Deep Gap and Meat Camp sites recorded the lowest early-voting turnouts in the county. Hodges explained on Dec. 9 that a site around the U.S. 421 and N.C. 194 intersection in Perkinsville would be beneficial.

“I feel a site in that area would amaze us, startle us with those numbers,” Hodges stated on Dec. 9.

Finances were Hodges’ other concern, saying she wanted to be good stewards of the county’s money due to the state-mandated hours. According to a new general statute passed in 2019, all one-stop early voting sites in even-numbered election years must be open concurrently from 8 a.m. to 7:30 p.m. on the weekdays the board votes to have open.

“We need to be more conservative and careful,” Hodges said.

The board’s two Republicans, Eric Eller and Nancy Owen, opposed Hodges’ plan for closing the Deep Gap and Meat Camp sites. Eller said the early-voting numbers in 2018 and 2016 from both sites were comparable to the Western Watauga Community Center and Blowing Rock Town Hall.

“We have four sites that are running at approximately the same level,” Eller said.

Eller said the rural sites do not have AppalCART and many people in Deep Gap and Meat Camp don’t drive into Boone often, if at all. Eller contended that closing two rural sites and opening a third early-voting location in Boone would send the wrong message to rural voters.

“It would be a considerable disservice if we were to close those two sites,” Eller said. “I fail to see utility to say ‘your votes are too expensive for us.’”

Eller presented his plan, which was mostly the same as Hodges’ with the exception of keeping the Deep Gap and Meat Camp sites and having no Perkinsville location.

Owen contended that the two sites Hodges looked to combine into one were Republican strongholds and said the board needs to make sure all people in the county, not just Boone, have access to vote.

“We seem to have forgotten our rural voters,” Owen said. “Our oaths were to Watauga County, not the town of Boone.”

Hodges said her plan did not have partisan motives in mind, saying she has never made a decision while serving on the board that is politically motivated.

The discussion on Dec. 9 went into a back and forth between board members. On Dec. 10, Owen, Hodges and board member Matthew Walpole apologized for their statements the day before.

During the discussion, Tom Rokoske of Boone asked about the potential of mobile units for the one-stop early-voting site problems, to which the board members said it’s something to consider.

On Dec. 10, Walpole asked Watauga County Board of Elections Director Matt Snyder about the budget for a seventh early-voting site, noting the county commissioners only budgeted for six sites.

The High Country Vacation Rentals site, located at the corner of Church Road and N.C. 105 in the Foscoe community, was added due to what board members felt like was a need in that area.

Eller said that before the 2018 election, he was against such a site, but the number of mail-in and absentee ballots from the area indicated a need.

Snyder said that per the board’s direction, they had looked into several sites in the Seven Devils/Foscoe/Valle Crucis area, but no others could be worked out.

“I think we’ve exhausted most everything we could,” Snyder said of looking for a Foscoe area early-voting site.

The concerns with High Country Vacation Rentals was that it would require drapes and curtains to create a separate area, which board members said wasn’t ideal, but Snyder said the building owners were agreeable to other election security requirements such as having a room to lock up equipment at night and changing the locks for the election workers.

Snyder said he was also under the impression that High County Vacation Rentals would also be available as an early-voting site in the general election in October and November 2020.

During public comment, four ASU students spoke in favor of moving the county’s Election Day transfer voting site to the ASU Plemmons Student Union. ASU College Dems Vice President Dalton George said he saw a number of students who tried to vote on Election Day at the student union “scared off” by what he said were how election workers introduce provisional ballots to them if they were at the wrong precinct.

Hodges told the crowd the transfer site, which previously has been at the Watauga County Courthouse, will be decided at a future meeting.