BOONE — Boone Police have arrested a man from Lenoir for alleged arson of the Boone ABC Store, the department announced on Monday, Nov. 8.

On Oct. 25, Boone Police officers and Boone Fire personnel responded to the Boone ABC Store at 2067 Blowing Rock Road for a report of smoke on the side of the building.

Upon their arrival, it was discovered that several empty cardboard boxes stacked in a loading area had been ignited and the fire had caused damage to vinyl siding on the store, Boone Police said in a statement.

Bare was taken before a Watauga County Magistrate where he was given a $35,000 secured bond and a court date of Dec. 17, according to the Boone Police Department.

Results were finalized after a county canvass on Nov. 9 and provisional and absentee ballots were counted on Nov. 5.

Tim Futrelle was elected as Boone mayor with 1,338 votes. He was the only candidate running for mayor. Futrelle said he was humbled and honored for the opportunity to serve as mayor of Boone.

“I am grateful for the trust and support that I received throughout my campaign, especially the amazing volunteers for their time and energy that made this possible,” Futrelle said. “I would like to thank my wife, Jeanie, for her patience, love and counsel. All the candidates ran a community focused and positive campaign, which is a great representation of Boone’s character.”

He said he believed voters sent a clear message that voters agreed with the platform his campaign put out and that “now the work of the people’s business begins.”

For the four-year terms on the Boone Town Council, Todd Carter was elected with 1,099 votes along with Virginia Roseman, who earned 1,090 votes. Jon Dalton George was elected to the two-year term with 1,043 votes.

Both George and Roseman were the only two candidates running to keep their seats on the current town council. Each were appointed to fill a seat earlier this year.

Tugman, who received the most votes of any Boone Town Council candidate, said she was inspired by the support she received from the community.

“I am so proud to be one of the elected candidates to help the town of Boone move forward to address the community’s primary concerns,” Tugman said in a statement. “I believe voters expressed defined choices in electing candidates who won by a clear majority. I will work hard to reflect every voice with each task I undertake.”

Tugman said she intends to make neighborhood preservation, affordable housing, support for the Town of Boone’s professional staff and a productive relationship with Watauga County realities. She also said she supported growth that reflects the history and preservation of what makes Boone a “special community.”

“I respect the candidates who did not win and their efforts during the campaign. They care about Boone, too,” Tugman said. “They have ideas that need to be heard, and I believe they helped bring many concerns to the forefront for the voters to choose the direction of the town for the future. Everyone’s perspective matters in the choices we make.”

Carter, who received the second-most votes on election night, said in a statement he was humbled by the outpouring of support at being elected to town council. He said he would be transparent, accountable and available to the citizens of Boone.

“Civic engagement has been a cornerstone of my family for generations and I am honored to continue that legacy,” Carter said. “I applaud each candidate who put their name on the ballot to serve our community. Public service is the bedrock of our democracy and should always be recognized and encouraged. I am truly appreciative of the confidence placed in me by Town of Boone voters. I am excited to continue working, in this new role, to make Boone a more equitable, inclusive, affordable and welcoming place for all of its residents.”

Roseman, one of two candidates who was appointed to the current town council, said she was honored.

“I don’t know how to thank the people enough for believing in me,” Roseman said. “I love Boone. I hope I’m gonna make everyone proud.”

She said she hopes to give Boone the love that everybody has entrusted her with, and hopes she will make them proud.

George, the other candidate appointed to the current town council, said in a statement he could not promise that he would be perfect, but that he would work hard to make Boone a better place.

“For anyone reading this, friend or foe, you have someone in town hall who will listen,” George said. “Reach out at any point and we can have a conversation about what Boone can do to be a better place for you. Congratulations to the other candidates. Thank you to everyone for the support. To those who came up short, reach out to me. Your perspective matters too! For now, time to celebrate a little.”

Nenow said she is excited to work with the council on affordable housing and sustainability initiatives.

“I am humbled and honored to be elected and I am incredibly proud of Boone for electing this strong team,” Nenow said.

“I am exceedingly grateful to the voters of Blowing Rock for their strong support. These are critical times in Blowing Rock, even transitional,” Sellers said. “When all is said and done this election is not about seasonal residents vs. full-time residents. Certainly it is not about being a Republican or a Democrat. It is simply about Blowing Rock.”

“First, I have to credit my campaign team. They worked very hard for me and they were very effective on my behalf and in helping coordinate our efforts. Since we worked toward this for the better part of a year, of course we are tired. But I am also energized by the strong support I received,” Gherini said. “I learned a lot during my tenure as chairman of the Blowing Rock planning board. It is a volunteer advisory role, but it is rich with experience and for understanding the forces that are at work here.”

The board met at 11 a.m. on Nov. 9 for the county canvass to finalize and make the election results official.

“It’s a pretty awesome thing across America today, or at least North Carolina,” Snyder said on Nov. 2. “People came together in all the towns and cities for the most part and worked together to elect representatives to help shape them through a really big, changing time in North Carolina.”

More information on the 2021 municipal elections can be found at www.wataugacounty.org/App_Pages/Dept/BOE/notices.aspx.

PARKWAY — Investigators with the National Park Service are asking for the public’s help to provide photos or videos in support of an ongoing homicide investigation on the Blue Ridge Parkway.

On Oct. 9, Parkway personnel received a report from a park visitor of a body near a parkway overlook. Law enforcement rangers responded to the scene and located a deceased male below Yadkin Valley Overlook at Milepost 289.8. Investigators identified the victim as Josue Calderon, 33, of Rhode Island. An autopsy conducted by the North Carolina State Medical Examiner’s Office determined cause of death to be homicide.

Though no further details are available at this time, information from other travelers and visitors is often very helpful to investigators. If anyone took photographs or videos (cell phone, GoPro, etc.) on the Blue Ridge Parkway anywhere in North Carolina on Oct. 9, or if they have any other information that could help, they are asked to submit a tip.

VALLE CRUCIS — Planning for the new Valle Crucis school passed a significant step on Nov. 2 when it went before the Valle Crucis Historic Preservation Commission.

The commission granted Watauga County Schools a Certificate of Appropriateness. According to the National Park Service, a CoA states that the proposed work is appropriate for the historic district and meets criteria in the local code.

“Valle Crucis’ historic district has building standards similar to zoning standards that must be adhered to,” WCS Superintendent Scott Elliott said. “School and governmental agencies have to comply with some but not all of the standards. The CoA is intended to ensure that the exterior design, including the types and colors of the materials, are consistent with the historical nature of the community.”

Elliott said the proposal calls for exterior finishes such as a distressed metal roof, vertical wood siding and rock work reminiscent of the historical stonework on the old school built during the Works Progress Administration. The site will also include natural landscaping with boulders, wood fences and natural screening between the school and neighbors. 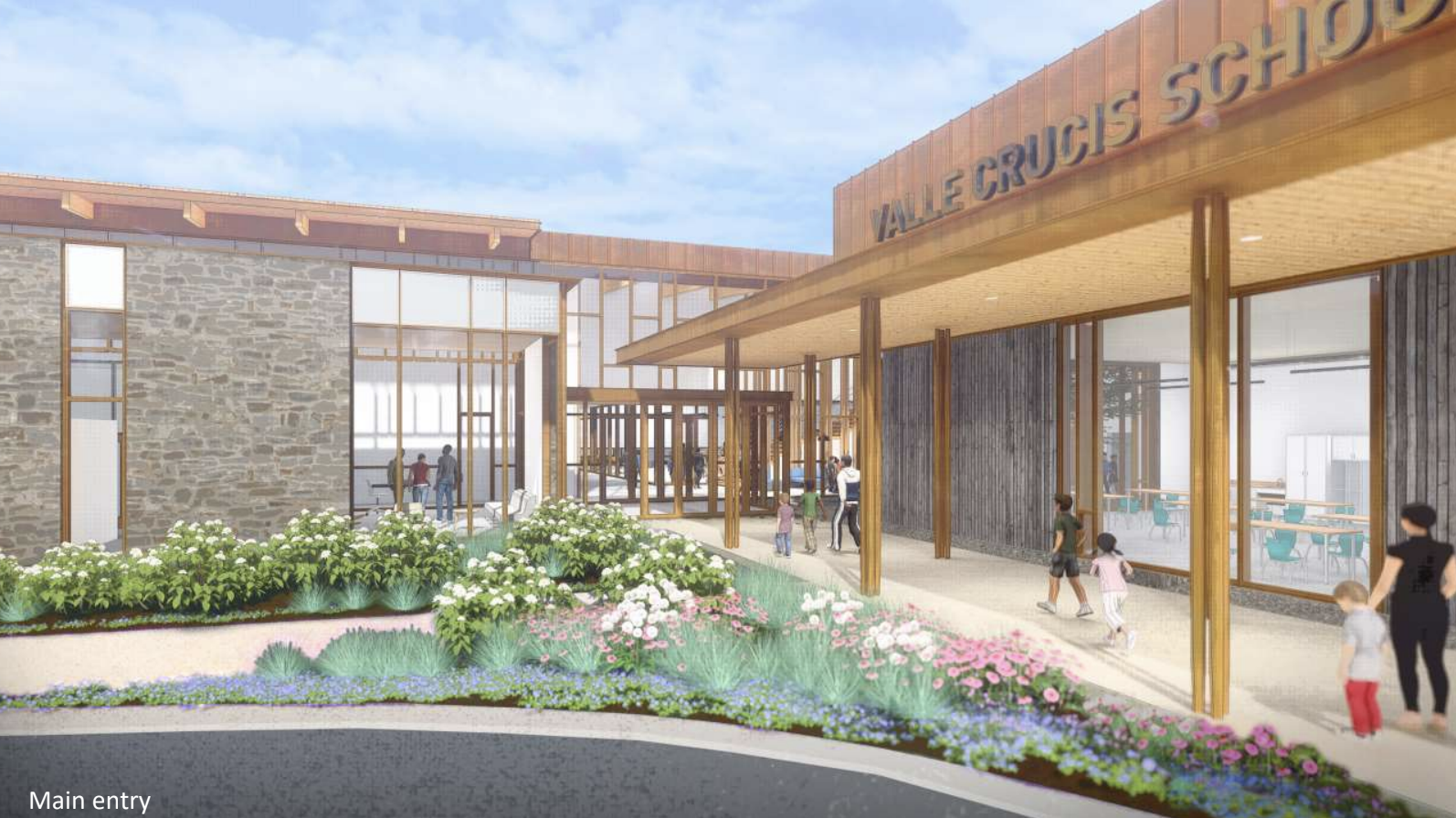 The proposed look of the main entry at the new Valle Crucis School.

“The new building will be a modern, state of the art learning environment,” Elliott said. “The old building has been modified and stabilized over the years in order to make it usable, but the new building will have a purposeful design. It will include lots of natural light, open spaces, and modern heating and cooling systems. The layout of the property will also ensure that we get excess school traffic off of Broadstone Road.”

The proposal also has approximately double the amount of space for car pick up and drop-off lines. The new school will have modern storm water retention and management systems to ensure that surface water settles before being discharged.

With the CoA granted, Elliott said the design process can now move forward to the development of construction documents that can be sent out to bid with general contractors who would like to work on the project. He said the North Carolina Department of Insurance will review and the budget and funding will be reviewed by the local government commission.

“From there we will review bids, finalize the budget, issue contracts and begin construction,” Elliott said. “Our hope is to have the new building completed and ready to move in during the summer of 2024.”

For the design process, two public hearings were held regarding the purchase of the land, but the design work was conducted by the architects using feedback from county commissioners, board of education members, school system staff and the input of staff from Valle Crucis School.

“The overall layout and design of the school is largely dictated by the site itself, but the teachers and school staff gave a lot of input into what needed to be inside the school,” Elliott said. “The Valle Crucis School principal, Bonnie Smith, was especially involved in ensuring that all the school’s programmatic and instructional needs were considered in the process.” 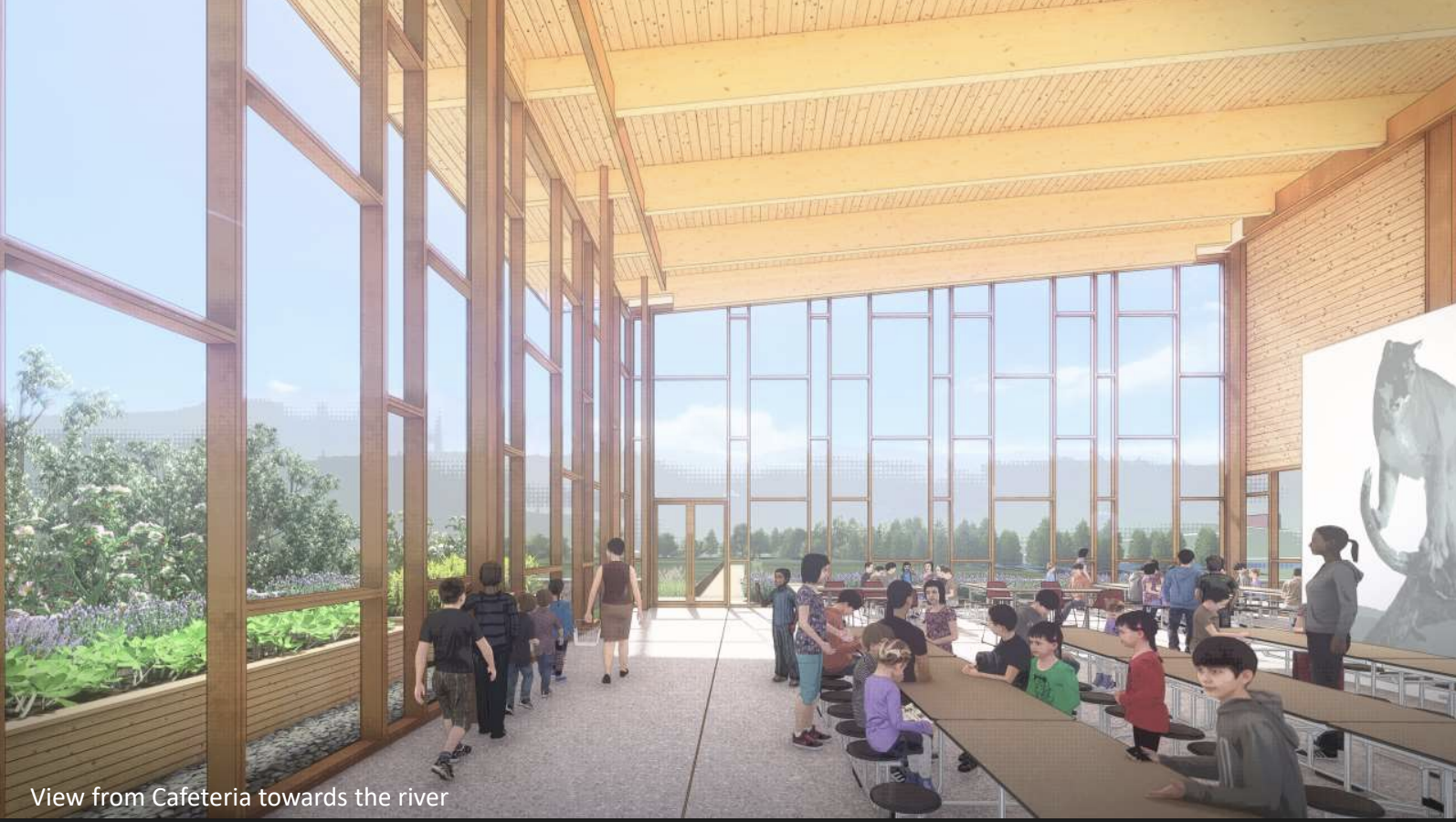 The proposed view from the cafeteria of the new Valle Crucis School.

The final design decisions were made by a small committee consisting of the county manager Deron Geoue, Principal Smith, WCS director of facilities Jeff Trexler and Elliott.

The design is still not final and will likely go through a number of changes as the school system moves through the budding and construction process.

Elliott said there are not current plans for the current Valle Crucis school project and that the property will revert back to ownership by the county and its future will be determined by the county commissioners after the new school is built.

“I am very excited about our progress so far,” Elliott said. “Our students, teachers and community have deserved this for a very long time.”

Bidding for the project is set to go out from July to August 2022 with groundbreaking is tentatively scheduled for September 2022. The school is set to open on June 1, 2024. 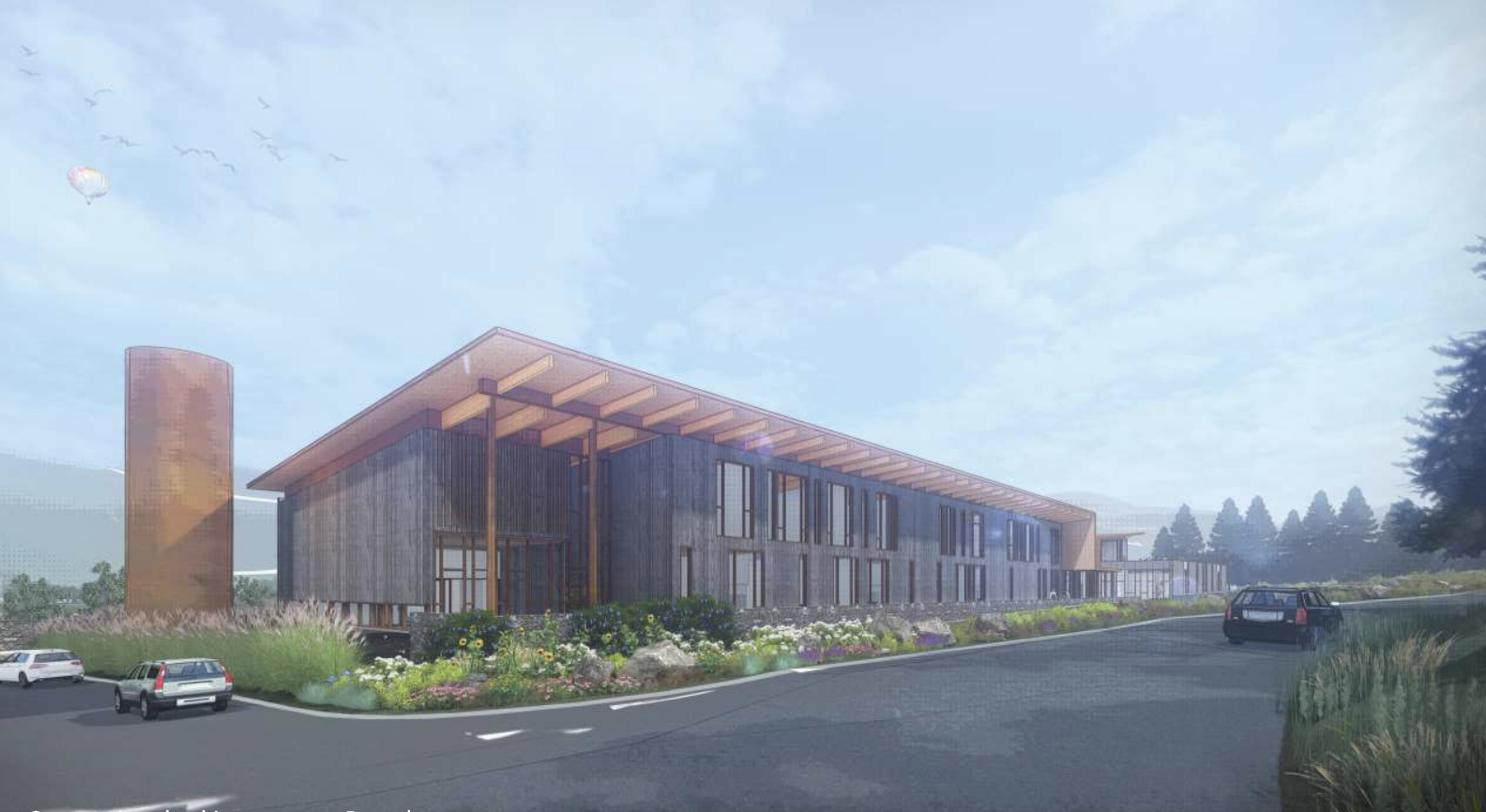