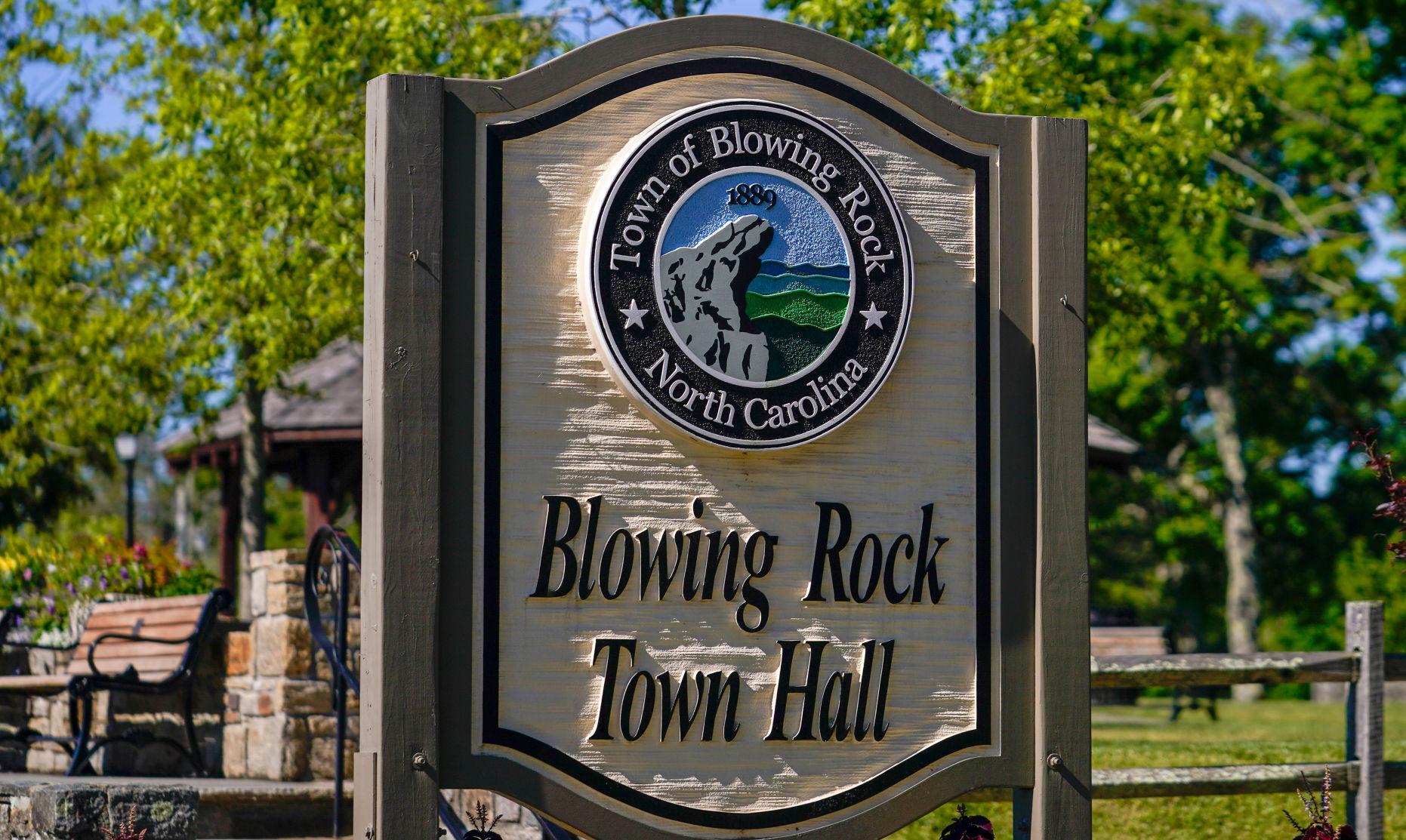 BLOWING ROCK — In a special called meeting on Nov. 17, Blowing Rock’s town council voted 3-2 to end the state of emergency due to COVID-19 and lifted the mask mandate within the town limits.

The commissioners were split 2-2 on the measure and mayor Charlie Sellers cast the deciding vote. In articulating the reason for his tie-breaking vote, Sellers said at this point it should be a matter of choice whether or not to wear a mask; that the mandate was not being enforced and was challenging to enforce to begin with; the state and county do not have such a mandate; and that only four towns or counties in North Carolina currently have a mask mandate.

The motion by Albert Yount (seconded by Doug Matheson) to lift the state of emergency and mandate included the condition that if the 7-day moving average of the percent of positive tests is over 5 percent for seven consecutive days, then the town council will reconvene and consider reinstating the COVID-19 restrictions. David Harwood and Sue Sweeting voted to keep the state of emergency and mask mandate in place.

According to Centers for Disease Control website, the 7-day moving average of total cases in Watauga County is 70, producing a statistical “case rate” of 124.61 cases per 100,000 people. The percentage change in the 7-day moving average of total cases is -20.45 percent. One death due to COVID-19 was reported in a Watauga County resident on Nov. 15 to bring the total number of deaths among residents to 40 since the start of the pandemic.

The percent of positive test results in Watauga County, according to the CDC is 3.99 percent.

According to AppHealthCare, there were 59 active cases in Watauga County as of Nov. 17.

It should be noted that a newly comprised town council will take office at the regular meeting on Dec. 14. Holdover commissioners include Yount, Matheson and Harwood and will be joined by newly elected Pete Gherini and Melissa Pickett. Commissioners serve 4-year terms. Sellers won re-election as mayor for another 2-year term.

BOONE — Nearly 30 volunteers came together on Nov. 20 to plant 174 trees throughout the floodplain of the former Bolick Farm, which is now owned by the town of Boone.

Boone partnered with the New River Conservancy to plant the trees as part of a larger restoration and reforestation of the floodplain along the South Fork of the New River.

“Boone has partnered with New River Conservancy on multiple stream and river restoration projects,” Santucci said. “The recent phase of this project restored nearly 3,000 linear feet of the South Fork on both sides of the river, Bolick and Brookshire. Watauga County supported the project financially and welcomed restoration activities to the Brookshire Park side of the river.”

Tree species included sycamore (14), tulip poplar (14), black cherry (58), basswood (22), hazelnut (16), red osier dogwood (10), yellow buckeye (20) and river birch (20), which Santucci said were paid for by a grant from Audubon NC that was secured by the High Country Chapter of the Audubon Society.

“(The trees) are native and well suited for frequently wet areas,” said NRC Restoration Direction Chelsea Blount. “In other words, they like to keep their feet wet. Together, they will create a diverse forested area for native and migratory birds.”

Blount said the trees were supplied by Mellow Marsh Farm, Piedmont Carolina Nursery and Weaver’s Nursery. Blount also said the tree planting effort was an expansion of the recently completed river restoration funded in part by the NC Land & Water Fund along with financial support from both Watauga County and town of Boone.

Blount said several other organizations helped support the volunteer day including the town of Boone for protecting 30 acres, allowing us to restore it, and for continued support of efforts like this; High Country Audubon Society for initiating the partnership, writing the grant for trees, and providing volunteers; Watauga County Cooperative Extension for providing the shuttle van to safely get everyone to the site; New River State Park for lending tools and volunteers; and Blue Ridge Energy for allowing the volunteers to gather in their parking lot while we welcomed volunteers.

The Bolick farm was purchased by Boone at the end of 2016. In addition to the restoration of the bottomland forest, Boone plans to build a municipal complex on the upland portion of the property and add to Boone’s greenway system along the river, according to Santucci.

BEECH MOUNTAIN — Beech Mountain Police have filed charges in connection to the death of Betsy Dellinger reported on Nov. 12, according to the police department who investigated the death with the North Carolina State Bureau of Investigation.

BMPD stated that Hicks is currently being held by the Carter County Sheriff’s Office Detention Center in Elizabethton, Tennessee on unrelated charges and is awaiting extradition back to North Carolina.

This story was updated to reflect that charges have been filed.

CHARLOTTE — U.S. District Judge Kenneth Bell handed down sentences of up to 15 years in prison to five defendants for their involvement in a methamphetamine trafficking ring, Acting U.S. Attorney for the Western District of North Carolina William Stetzer announced on Thursday, Nov. 18.

Bell sentenced the defendants as follows:

• Jeffrey David Miller, of Sugar Grove, was sentenced to 36 months in prison and three years of supervised release. Miller pleaded guilty to conspiracy to distribute methamphetamine and distribution of methamphetamine.

A sixth co-defendant, Timothy Wilson Critcher, 47, of Boone, is scheduled to be sentenced on Dec. 7.

According to court documents and the sentencing hearing, from 2018 to 2020, Allen and his co-conspirators trafficked more than 12 kilograms of crystal methamphetamine in Ashe and Watauga counties, and elsewhere. Court documents show that Allen was the source of supply for the methamphetamine, and his co-defendants operated as couriers and sellers in the conspiracy.

This case is supported by the Organized Crime and Drug Enforcement Task Force as part of an ongoing investigation focusing on drug organizations trafficking large quantities of methamphetamine in Western North Carolina. To date, more than 200 individuals have been prosecuted, and law enforcement have seized more than 20 kilograms of crystal methamphetamine, $500,000 in U.S. currency and other assets, and dozens of firearms, according to the U.S. Department of Justice.

OCDETF identifies, disrupts, and dismantles the highest-level criminal organizations using a prosecutor-led, intelligence-driven, multi-agency approach. Additional information about the OCDETF Program can be found at www.justice.gov/OCDETF.

In making the announcement, Acting U.S. Attorney Stetzer recognized the following federal, state and local agencies which partnered in this investigation, and thanked them for their continued cooperation and support: the U.S. Immigration and Customs Enforcement’s, Homeland Security Investigations; the Bureau of Alcohol, Tobacco, Firearms, and Explosives; the North Carolina State Bureau of Investigation; the Ashe County Sheriff’s Office; the Watauga County Sheriff’s Office; the Boone Police Department; and the Johnson County Tennessee Sheriff’s Office in Tennessee.

The prosecutions are being handled by Assistant U.S. Attorney Steven R. Kaufman of the U.S. Attorney’s Office in Charlotte.

HIGH COUNTRY — The North Carolina state budget signed into law on Nov. 18 provides more than $75 million in funding for Ashe, Avery and Watauga counties, including money for a parking facility in Watauga, sidewalks in Lansing and county building renovations in Avery.

“This budget moves North Carolina forward in important ways,” Gov. Roy Cooper said when he signed the budget into law. “Funding for high speed internet, our universities and community colleges, clean air and drinking water and desperately needed pay increases for teachers and state employees are all critical for our state to emerge from this pandemic stronger than ever. I will continue to fight for progress where this budget falls short but believe that, on balance, it is an important step in the right direction.”

“After months of productive negotiations with the Governor, I’m proud to see this budget pass and be signed into law,” Ballard said in a press release. “As the chairwoman of the Senate Education Committee, it’s reassuring to see Democrats and Republicans come together to work on behalf of our students across North Carolina. I am also glad to know our High Country residents will keep more of their hard-earned money and see major infrastructure improvements funded in their community because of this budget.”

“This is a historic budget that includes critical funding for our community and the people of North Carolina,” Pickett said in a press release. “I am proud to have helped make sure the needs and concerns of our region are met.”

“For the past decade, North Carolina Republicans have enacted smart, fiscally responsible budgets,” Daniel said in a press release. “Because of that, we’ve seen healthy budget surpluses year after year. This year’s budget builds on that by providing major tax relief to families and major infrastructure improvements, including $128 million for projects in our community.”

For Ashe and Watauga counties, the following funds are included in the budget:

For Avery County, the following funds are included in the budget:

The budget also provides money for education across the state.

“Even though we are over four months into the fiscal year, I am very grateful that we have a budget in place and we can plan for the remainder of the school year,” Watauga County Schools Superintendent Scott Elliott said. “There are many positive aspects to the budget, including the bonuses for our hard working school staff members and the increased investments in school facilities and community infrastructure. I am especially encouraged by the positive bipartisanship and leadership that our state so badly needs right now. Maybe this is a sign of more positive things to come.”

Watauga County Association of Educators representative Adrienne Stumb agrees that there are good items in the budget for educators, as she said it appears that legislators are moving more North Carolina Education Lottery money into public schools in the form of construction and repair of schools.

“These capital expenditures are long overdue, and we appreciate that our lawmakers saw this as a need,” Stumb said.

In addition, Stumb said the wage increase for classified staff — like custodians, cafeteria workers, bus drivers and teacher assistant — is a step in the right direction toward honoring the work these people do to keep “our kids safe, fed, in school and fully supported in their education.”

However, the wage language for teachers, Stumb said, is disappointing.

“While many of the press releases tout an ‘average five-percent pay hike for teachers,’ in reality, this is only a 1.3-percent pay increase this year with a similar 1.3-percent pay increase next year,” Stumb said. “The step increases are also there but this leaves our veteran teachers, many who are not eligible for step increases due to outdated salary charts, without a wage that matches inflation. We would appreciate our lawmakers being more upfront to taxpayers and educators if they feel they cannot provide fairer salaries.”