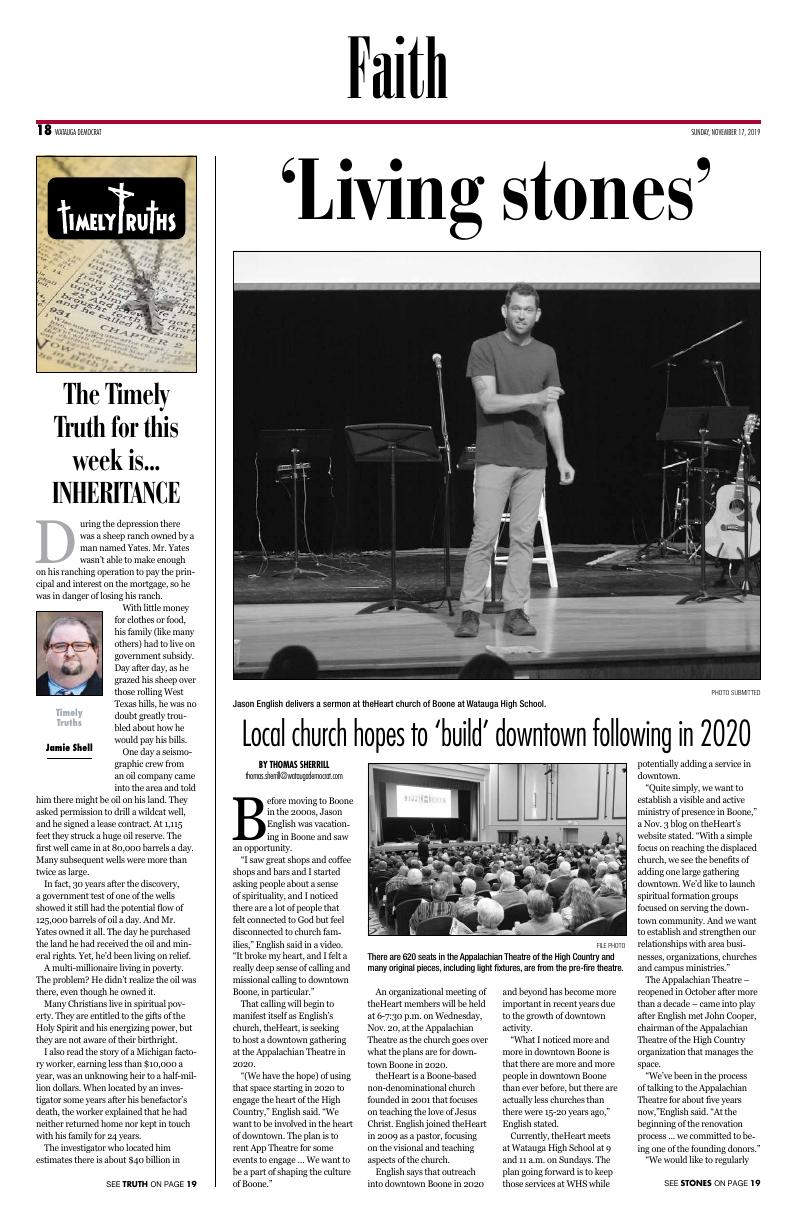 theHeart church, shown here during a 2019 service, meets at 9 and 11 a.m. every Sunday at Watauga High School.

There are 620 renovated seats in the Appalachian Theatre of the High Country and many original pieces, including light fixtures, are from the original theatre.

Before moving to Boone in the 2000s, Jason English was vacationing in Boone and saw an opportunity.

“I saw great shops and coffee shops and bars and I started asking people about a sense of spirituality, and I noticed there are a lot of people that felt connected to God but feel disconnected to church families,” English said in a video. “It broke my heart, and I felt a really deep sense of calling and missional calling to downtown Boone, in particular.”

That calling will begin to manifest itself as English’s church, theHeart, is seeking to host a downtown gathering at the Appalachian Theatre in 2020.

“(We have the hope) of using that space starting in 2020 to engage the heart of the High Country,” English said. “We want to be involved in the heart of downtown. The plan is to rent App Theatre for some events to engage … We want to be a part of shaping the culture of Boone.”

An organizational meeting of theHeart members will be held at 6-7:30 p.m. on Wednesday, Nov. 20, at the Appalachian Theatre as the church goes over what the plans are for downtown Boone in 2020.

theHeart is a Boone-based non-denominational church founded in 2001 that focuses on teaching the love of Jesus Christ. English joined theHeart in 2009 as a pastor, focusing on the visional and teaching aspects of the church.

English says that outreach into downtown Boone in 2020 and beyond has become more important in recent years due to the growth of downtown activity.

Currently, theHeart meets at Watauga High School at 9 and 11 a.m. on Sundays. The plan going forward is to keep those services at WHS while potentially adding a service in downtown.

“Quite simply, we want to establish a visible and active ministry of presence in Boone,” a Nov. 3 blog on theHeart’s website stated. “With a simple focus on reaching the displaced church, we see the benefits of adding one large gathering downtown. We’d like to launch spiritual formation groups focused on serving the downtown community. And we want to establish and strengthen our relationships with area businesses, organizations, churches and campus ministries.”

“We’ve been in the process of talking to the Appalachian Theatre for about five years now,”English said. “At the beginning of the renovation process ... we committed to being one of the founding donors.”

“We would like to regularly host special events at App Theatre as often as possible,” the Nov. 3 blog stated. “We envision this new cultural jewel becoming a beacon for theHeart as we invite people into a loving relationship with God, Christ and ourselves.”

Meeting at Watauga High School and potentially the Appalachian Theatre is part of a calling theHeart feels is a part of their mission, comparing it to an Old Testament story of God telling the Israelite they would harvest fields they didn’t plant and live in houses they didn’t build in the promised land.

English calls the downtown project a building renovation, but not in a traditional sense.

“Instead of bricks and mortar, we are putting living stones — people who love God but feel disconnected to any church family — back in place,” the Nov. 3 blog stated.

During the depression there was a sheep ranch owned by a man named Yates. Mr. Yates wasn’t able to make enough on his ranching operation to pay the principal and interest on the mortgage, so he was in danger of losing his ranch.

With little money for clothes or food, his family (like many others) had to live on government subsidy. Day after day, as he grazed his sheep over those rolling West Texas hills, he was no doubt greatly troubled about how he would pay his bills.

One day a seismographic crew from an oil company came into the area and told him there might be oil on his land. They asked permission to drill a wildcat well, and he signed a lease contract. At 1,115 feet they struck a huge oil reserve. The first well came in at 80,000 barrels a day. Many subsequent wells were more than twice as large.

In fact, 30 years after the discovery, a government test of one of the wells showed it still had the potential flow of 125,000 barrels of oil a day. And Mr. Yates owned it all. The day he purchased the land he had received the oil and mineral rights. Yet, he’d been living on relief.

A multi-millionaire living in poverty. The problem? He didn’t realize the oil was there, even though he owned it.

Many Christians live in spiritual poverty. They are entitled to the gifts of the Holy Spirit and his energizing power, but they are not aware of their birthright.

I also read the story of a Michigan factory worker, earning less than $10,000 a year, was an unknowing heir to a half-million dollars. When located by an investigator some years after his benefactor’s death, the worker explained that he had neither returned home nor kept in touch with his family for 24 years.

The investigator who located him estimates there is about $40 billion in inheritances lying unclaimed in the US alone.

Are you as a Christian unaware of your status as “an heir of God through Christ?” Do you fail to receive the gifts our Father offers, such as the release from the stranglehold of sin and suffocation of guilt, power in the Holy Spirit to experience the abundant life, and the joy of fellowship with the Father and His other children? Like the prodigal factory worker and unknowing oil tycoon, do you live in ignorance of your inheritance and at a spiritual poverty level because you have moved away and failed to keep in touch with our Father or His family?

This week, remember the vast inheritance that we experience both during and after this life as explained through the words of the apostle Paul, who wrote to the church in Rome and also reminds us, ”For those who are led by the Spirit of God are the children of God. The Spirit you received does not make you slaves, so that you live in fear again; rather, the Spirit you received brought about your adoption to sonship. And by him we cry, “Abba, Father.” The Spirit himself testifies with our spirit that we are God’s children. Now if we are children, then we are heirs — heirs of God and co-heirs with Christ, if indeed we share in his sufferings in order that we may also share in his glory,” (Romans 8:14-17 NIV). 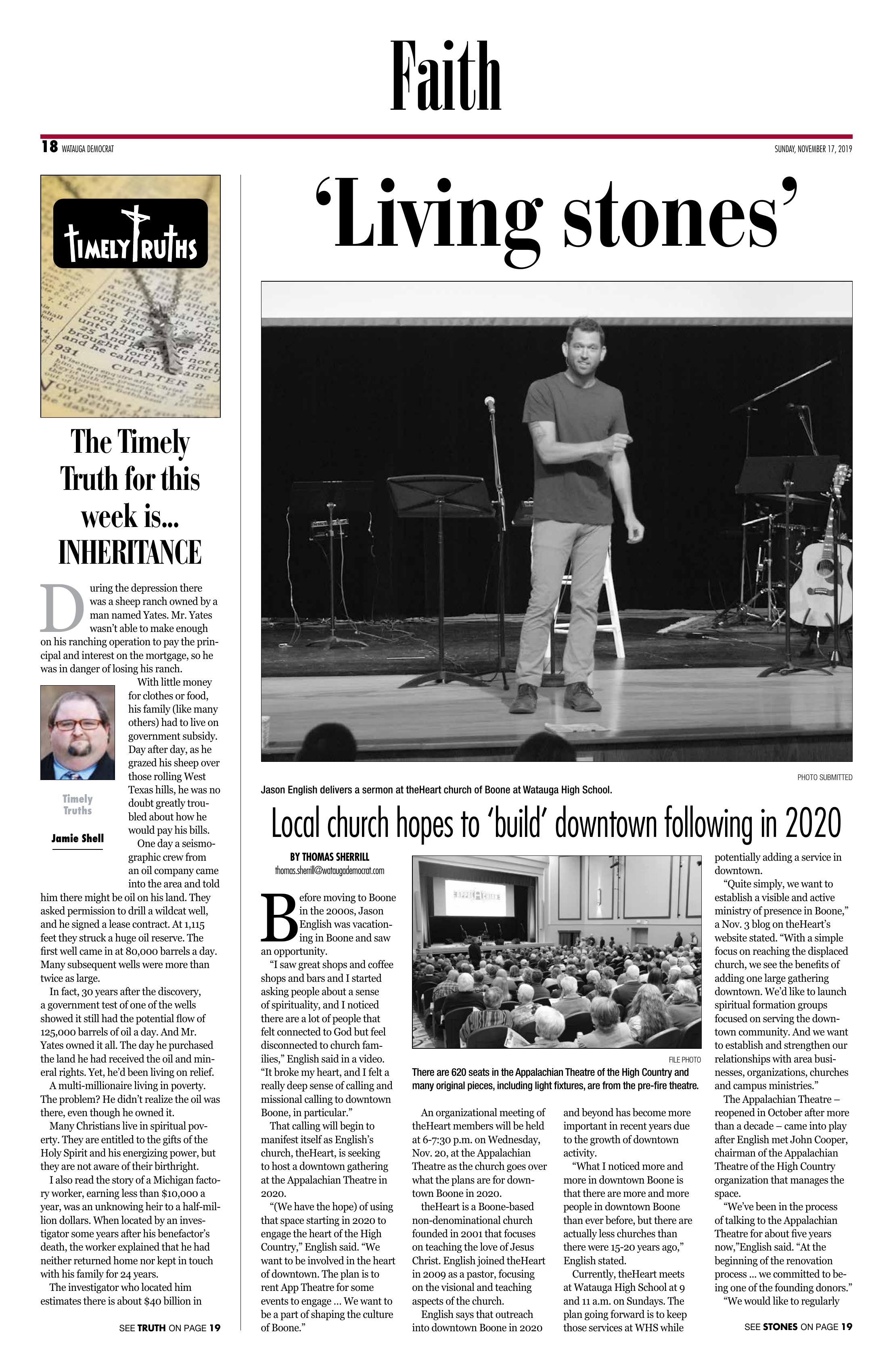