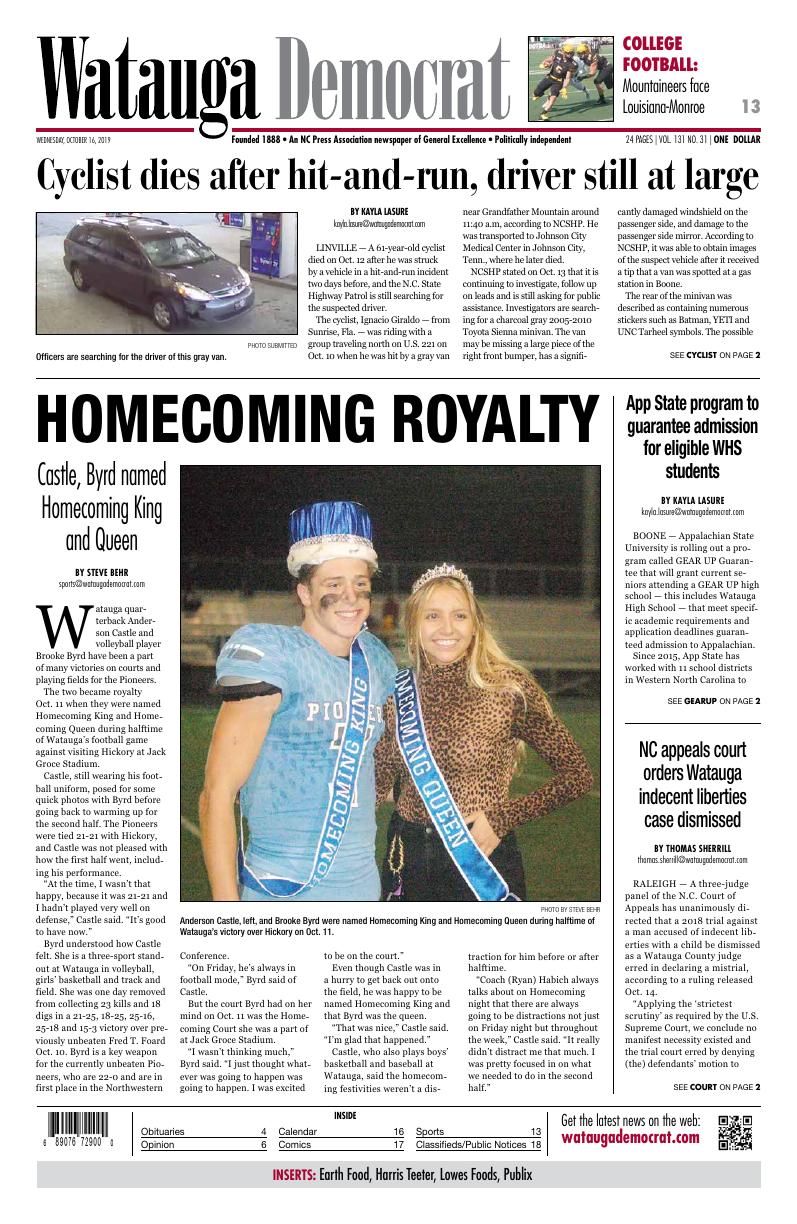 The N.C. State Highway Patrol is searching for an unidentified man.

Stickers are identified on the back windshield of a van that is being searched for by the N.C. State Highway Patrol.

An example of the vehicle in Thursday’s hit-and-run in Caldwell County.

LINVILLE — A 61-year-old cyclist died on Oct. 12 after he was struck by a vehicle in a hit-and-run incident two days before, and the N.C. State Highway Patrol is still searching for the suspected driver.

The cyclist, Ignacio Giraldo — from Sunrise, Fla. — was riding with a group traveling north on U.S. 221 on Oct. 10 when he was hit by a gray van near Grandfather Mountain around 11:40 a.m, according to NCSHP. He was transported to Johnson City Medical Center in Johnson City, Tenn., where he later died.

NCSHP stated on Oct. 13 that it is continuing to investigate, follow up on leads and is still asking for public assistance. Investigators are searching for a charcoal gray 2005-2010 Toyota Sienna minivan. The van may be missing a large piece of the right front bumper, has a significantly damaged windshield on the passenger side, and damage to the passenger side mirror. According to NCSHP, it was able to obtain images of the suspect vehicle after it received a tip that a van was spotted at a gas station in Boone.

The rear of the minivan was described as containing numerous stickers such as Batman, YETI and UNC Tarheel symbols. The possible driver is a white man, approximately 50-60 years of age, with a white or gray beard and may be wearing glasses. Anyone with information is encouraged to contact the SHP Troop F Communications Center at (828) 466-5500.

Anderson Castle, left, and Brooke Byrd are named Homecoming King and Homecoming Queen during halftime of Watauga’s victory over Hickory on Oct. 11.

Watauga quarterback Anderson Castle and volleyball player Brooke Byrd have been a part of many victories on courts and playing fields for the Pioneers.

The two became royalty Oct. 11 when they were named Homecoming King and Homecoming Queen during halftime of Watauga’s football game against visiting Hickory at Jack Groce Stadium.

Castle, still wearing his football uniform, posed for some quick photos with Byrd before going back to warming up for the second half. The Pioneers were tied 21-21 with Hickory, and Castle was not pleased with how the first half went, including his performance.

Byrd understood how Castle felt. She is a three-sport standout at Watauga in volleyball, girls’ basketball and track and field. She was one day removed from collecting 23 kills and 18 digs in a 21-25, 18-25, 25-16, 25-18 and 15-3 victory over previously unbeaten Fred T. Foard Oct. 10. Byrd is a key weapon for the currently unbeaten Pioneers, who are 22-0 and are in first place in the Northwestern Conference.

But the court Byrd had on her mind on Oct. 11 was the Homecoming Court she was a part of at Jack Groce Stadium.

Even though Castle was in a hurry to get back out onto the field, he was happy to be named Homecoming King and that Byrd was the queen.

“That was nice,” Castle said. “I’m glad that happened.”

Castle, who also plays boys’ basketball and baseball at Watauga, said the homecoming festivities weren’t a distraction for him before or after halftime.

“Coach (Ryan) Habich always talks about on Homecoming night that there are always going to be distractions not just on Friday night but throughout the week,” Castle said. “It really didn’t distract me that much. I was pretty focused in on what we needed to do in the second half.”

Since 2015, App State has worked with 11 school districts in Western North Carolina to serve more than 15,000 middle and high school students through Gaining Early Awareness and Readiness for Undergraduate Programs — otherwise known as GEAR UP. The current senior class is the first to have gone through all four years with the GEAR UP partnership.

The university stated that the collaboration between the partnering school districts and App State will “provide a seamless pathway for high school students to enroll.”

WHS students must meet the following qualifications to be guaranteed admission: a minimum weighted GPA of a 3.50, achievement of the minimum admission requirements and minimum course requirements for admission to the University of North Carolina system and successful completion of a criminal background check and conduct review as required by the UNC system.

“We often have students who have great potential to be successful in college but for whatever reason or another choose not to or financially cannot relocate to pursue post-secondary studies outside of Boone,” Elliott said. “This opens a whole world of other opportunities for our students.”

Cindy Barr, App State’s associate vice chancellor for enrollment management, said during the meeting that the university recognizes the high quality of students coming from WHS.

“We hope that this gives students confidence to apply to Appalachian,” Barr said. “We would love to have them and we hope they feel wanted and recruited.”

GEAR UP Guarantee will provide support to students in completing the admissions process and competing for App State’s most selective signature scholarships and selective academic programs, according to the university. App State spokesperson Megan Hayes said the program covers all GEAR UP high school students through 2023.

“While this program is intended to offer a more flexible and seamless pathway for first-year admission to Appalachian State University, it is important students consider all of their options to best meet their college and career goals,” the university stated. “Students are encouraged to discuss their individual college goals and pathways with a school counselor or college adviser.”

The “early action” application submission deadline for the 2020-21 school year at App State to be considered for scholarships is Nov. 1. All supporting materials are due by Nov. 15. Students who meet the GEAR UP Guarantee requirements can anticipate an admission decision within two to six weeks after completing the admission application, according to the university.

The regular admission deadline is Feb. 1. However, Hayes said the university encourages applications be submitted by the Nov. 1 deadline to allow students the opportunity to be considered for scholarships.

RALEIGH — A three-judge panel of the N.C. Court of Appeals has unanimously directed that a 2018 trial against a man accused of indecent liberties with a child be dismissed as a Watauga County judge erred in declaring a mistrial, according to a ruling released Oct. 14.

“Applying the ‘strictest scrutiny’ as required by the U.S. Supreme Court, we conclude no manifest necessity existed and the trial court erred by denying (the) defendants’ motion to dismiss,” the opinion of the court stated.

The case involved Luis Alberto Resendiz-Merlos, who, according to the ruling, in November 2017 was indicted on one court of indecent liberties with a female child. The child, the child’s sister – who reportedly witnessed the alleged crime – and the child’s mother were called in as witnesses for the trial, which started on May 22, 2018. The three females are not named in the court documents.

“The protection against double jeopardy provided to citizens by our federal and state constitutions is a fundamental right,” said Jak Reeves, attorney with the Reeves DiVenere Wright law firm of West Jefferson, who represented Resendiz-Merlos in the case. “We appreciate the (N.C.) Court of Appeals recognizing these rights as they apply to Mr. Resendiz in this case.”

Resendiz-Merlos pleaded not guilty and opening remarks were held, but later in the day, the prosecutor requested a show-cause order for the mother as she was not there.

“The trial started Monday (May 21) … the mother and two daughters were in our office,” said District Attorney Seth Banks. “We had full expectation they would be there on Tuesday, we would pick our jury, then proceed further. The mother had responsibility and legal obligation to transport her daughters to court and and did not do that. She actually made herself unavailable to be found by law enforcement as she did not show up to work, did not send her children to school and was completely unavailable after Monday and beyond.”

On Wednesday, May 23, 2018, the case says that the mother and two daughters did not show up again, with Judge Alan Thornburg informed that an officer visited her residence the night before but could not locate her. The defense counsel asked the court to dismiss the case, saying it wouldn’t be appropriate to declare it a mistrial.

Banks said he believes a mistrial should have been declared because the material witnesses did not show up due to no fault of their own.

“In my mind, there’s different circumstances for an adult that doesn’t show up (to court),” Banks stated.

“Given the circumstance, we are arguing for the mistrial because we couldn’t locate the material witnesses,” Banks said. “At the time, the victim and her sister had remained consistent with what happened in the case. We were content on putting them in front of a jury so they could make a determination on whether defendant had broken the law in abusing the child.”

Afterward, Resendiz-Merlos filed a motion to dismiss the case, saying a new trial would violate his constitutional protections against double jeopardy. On Aug. 21, 2018, Watauga County Judge Gary Gavenus denied the defendant’s motion to dismiss in a ruling, stating his court was not an appellate one and cannot overrule another Superior Court judge’s order. The ruling would have led to a second trial.

“The record here contains innuendo and suspicion only,” the N.C. Court of Appeals’ ruling states. “Although the court followed the mandate to make findings, there is no evidence on which those findings could be based.”

Banks said that since the original mistrial, they’ve located the mother and found out that she and the defendant had “extensive communication” before the trial, but said it’s not clear there’s any evidence of tampering, partially due to the conversations being in Spanish.

Banks said he’s reached out to the state attorney general’s office to discuss their options on appealing to the N.C. Supreme Court. On a unanimous N.C. Court of Appeals’ decision, the right to appeal isn’t automatic. 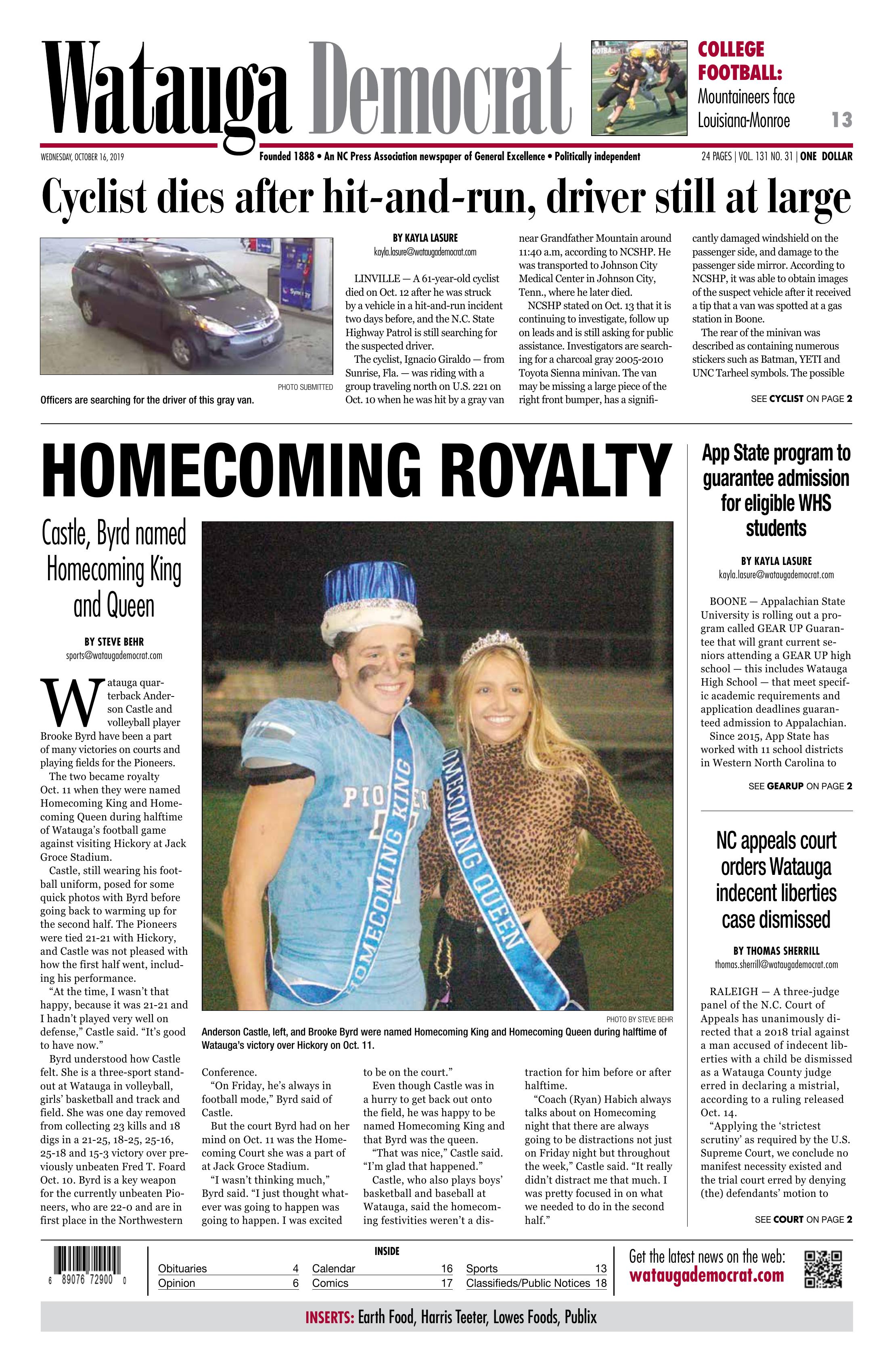