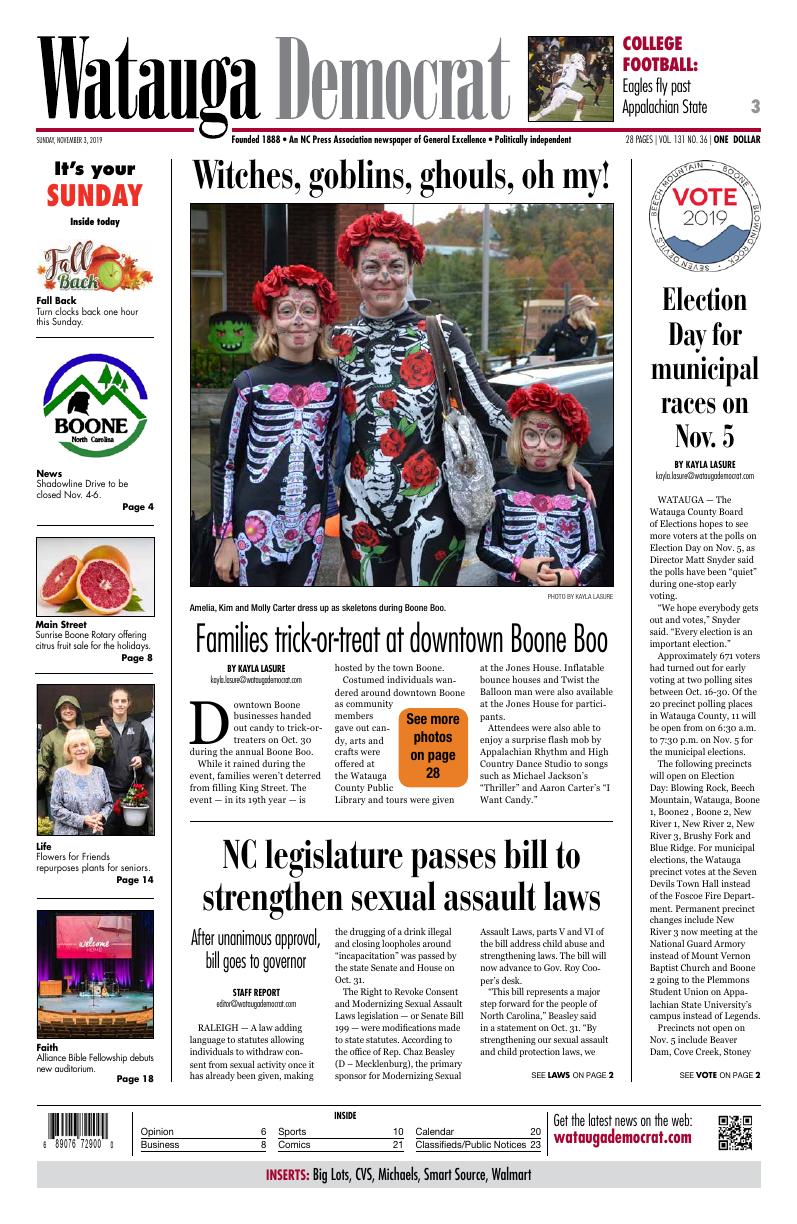 Amelia, Kim and Molly Carter dress up as skeletons during Boone Boo.

Tess Causby and Savannah Brittain hand out candy outside of Boone Belles on King Street dressed as Phil and Lil from the Rugrats.

Mckinley Burkett, 4, trick-or-treats as a vampire at Boone Boo.

Adam, Beverly, Enoch and Beatrice Yarborough are a family of pineapples during the Oct. 30 Boone Boo event.

Downtown Boone businesses handed out candy to trick-or-treaters on Oct. 30 during the annual Boone Boo.

While it rained during the event, families weren’t deterred from filling King Street. The event — in its 19th year — is hosted by the town Boone.

Costumed individuals wandered around downtown Boone as community members gave out candy, arts and crafts were offered at the Watauga County Public Library and tours were given at the Jones House. Inflatable bounce houses and Twist the Balloon man were also available at the Jones House for participants.

Attendees were also able to enjoy a surprise flash mob by Appalachian Rhythm and High Country Dance Studio to songs such as Michael Jackson’s “Thriller” and Aaron Carter’s “I Want Candy.” The flash mob even featured Tom Henry repelling down the side of Mast General Store as Frankenstein.

Lane Moody, Boone's downtown development coordinator, said Boone Boo is a fun event because it's a time to come together as a community and celebrate.

"We have such a unique downtown and our character is what sets us apart," Moody said. "It was great to see all the creative costumes, friends enjoying each other and family time in our downtown."

Moody wanted to thank the staff at the Jones House, Ashley Payne-Cook with Appalachian Rhythm, Amber Hendley with High Country Dance, Kendra Sink with Mast General Store, participating downtown business and the town of Boone's Public Works Department for help with the event.

RALEIGH — A bill adding language to statutes allowing individuals to withdraw consent from sexual activity once it has already been given, making the drugging of a drink illegal and closing loopholes around “incapacitation” was passed by the state Senate and House on Oct. 31.

The Right to Revoke Consent and Modernizing Sexual Assault Laws legislation — or Senate Bill 199 — were modifications made to state statutes. According to the office of Rep. Chaz Beasley (D – Mecklenburg), the primary sponsor for Modernizing Sexual Assault Laws, parts V and VI of the bill address child abuse and strengthening laws. The bill will now advance to Gov. Roy Cooper’s desk.

“This bill represents a major step forward for the people of North Carolina,” Beasley said in a statement on Oct. 31. “By strengthening our sexual assault and child protection laws, we will ensure that survivors get the access to justice they deserve and our kids are kept safer than ever before.”

Part V of SB199 addresses the right to revoke consent. According to Beasley’s office, the added language modifies the law by allowing individuals to withdraw consent to sex after it is initially given. The office states that this allowance would require a person to stop or be charged with rape if a person clearly articulates “no.”

According to the Carolina Public Press, North Carolina was the only state in the U.S. where continuing sex with a person after they revoked consent was not considered a crime until this bill.

“This part will allow prosecution of those who get consent and then choose to hurt someone who has changed their mind or when an act becomes violent,” Beasley’s office stated. “This provision stems from a nearly 40-year-old court precedent of State vs. Way.”

Part VI of SB199 addresses “modernizing sexual assault laws.” This part contains a provision clarifying the definition of a caretaker. The previous definition already included biological parents, stepparents, foster parents and adult members of the child’s household. It then addressed adults entrusted with the care of the child who were relatives, but not those who were unrelated.

The definition now will hold adults who are dating a child’s parent responsible if that adult abuses their significant other’s child, according to Beasley’s office.

“This ensures that abusive adults cannot use the fact that they are not legally or biologically related to a child to stall abuse investigations,” the office stated.

This part also includes provisions that expand statutes on drugging or adulterating food to also include beverages. This makes it illegal to put dangerous drugs or substances into someone’s drink — such as to “roofie” a drink, a common colloquial reference to this activity.

The law already stated that it was unlawful for any person to “knowingly distribute, sell, give away or otherwise cause to be placed in a position of human accessibility or ingestion,” but this language referred to food and not beverages.

Additionally, part VI prevents sexual assailants from taking advantage of people who are already in vulnerable mental states. In some cases in the past, assailants could use the fact that they did not cause a victim’s incapacitation as a defense against sexually assaulting a victim thereafter, according to Beasley’s office.

Language was also added to Part VII addressing sexual offender victim rights. The bill would allow victims to appear and be heard by the court in a proceeding regarding a request for termination of the sex offender registration requirement. If the victim has elected to receive notices of such proceedings, the district attorney’s office would be required to notify the victim of the date, time and place of the hearing. The victim would have the right to be heard by oral statement, submission of a written statement or submission of an audio or video statement.

WATAUGA — The Watauga County Board of Elections hopes to see more voters at the polls on Election Day on Nov. 5, as Director Matt Snyder said the polls have been “quiet” during one-stop early voting.

“We hope everybody gets out and votes,” Snyder said. “Every election is an important election.”

Snyder reiterated that only those voters who are registered and live within municipal town limits are able to vote in this election. To find out if a voter lives within town limits, visit the State Board of Elections website at ncsbe.gov and search a voter name. Snyder said the website will state if there is an available ballot. Voters can also call the Watauga Board of Elections office at (828) 265-8061 for more information.

Same-day registration is not available on Election Day as it is during one-stop voting. The exceptions to this includes those who’ve become a nationalized citizen since the cut-off date for registration on Oct. 11, felons who have had full rights restored after that date, or are active duty military who are home, according to Snyder.

Boone, Beech Mountain and Seven Devils all have three seats available on their town councils. Blowing Rock has two open seats and the position of mayor. 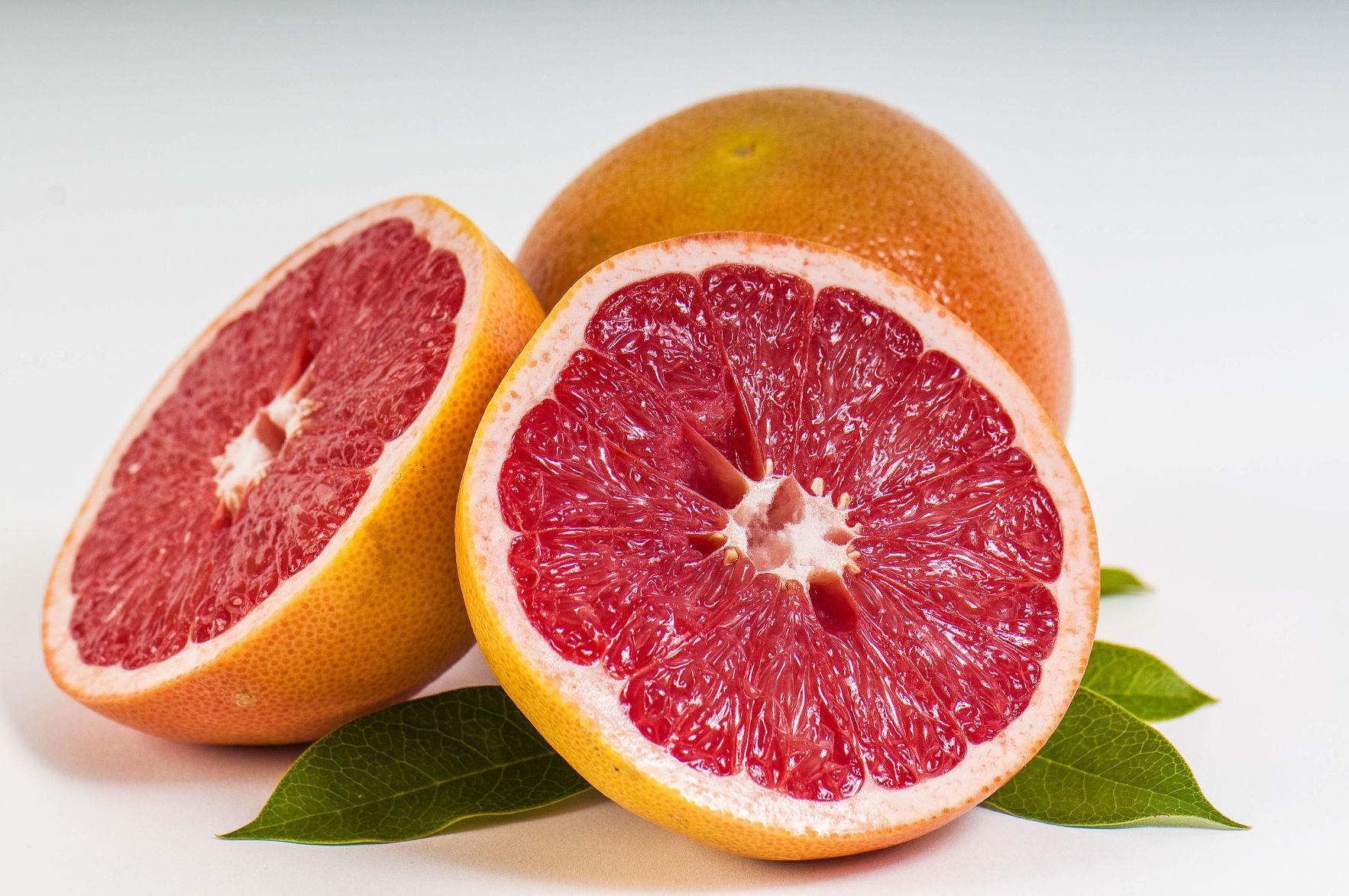 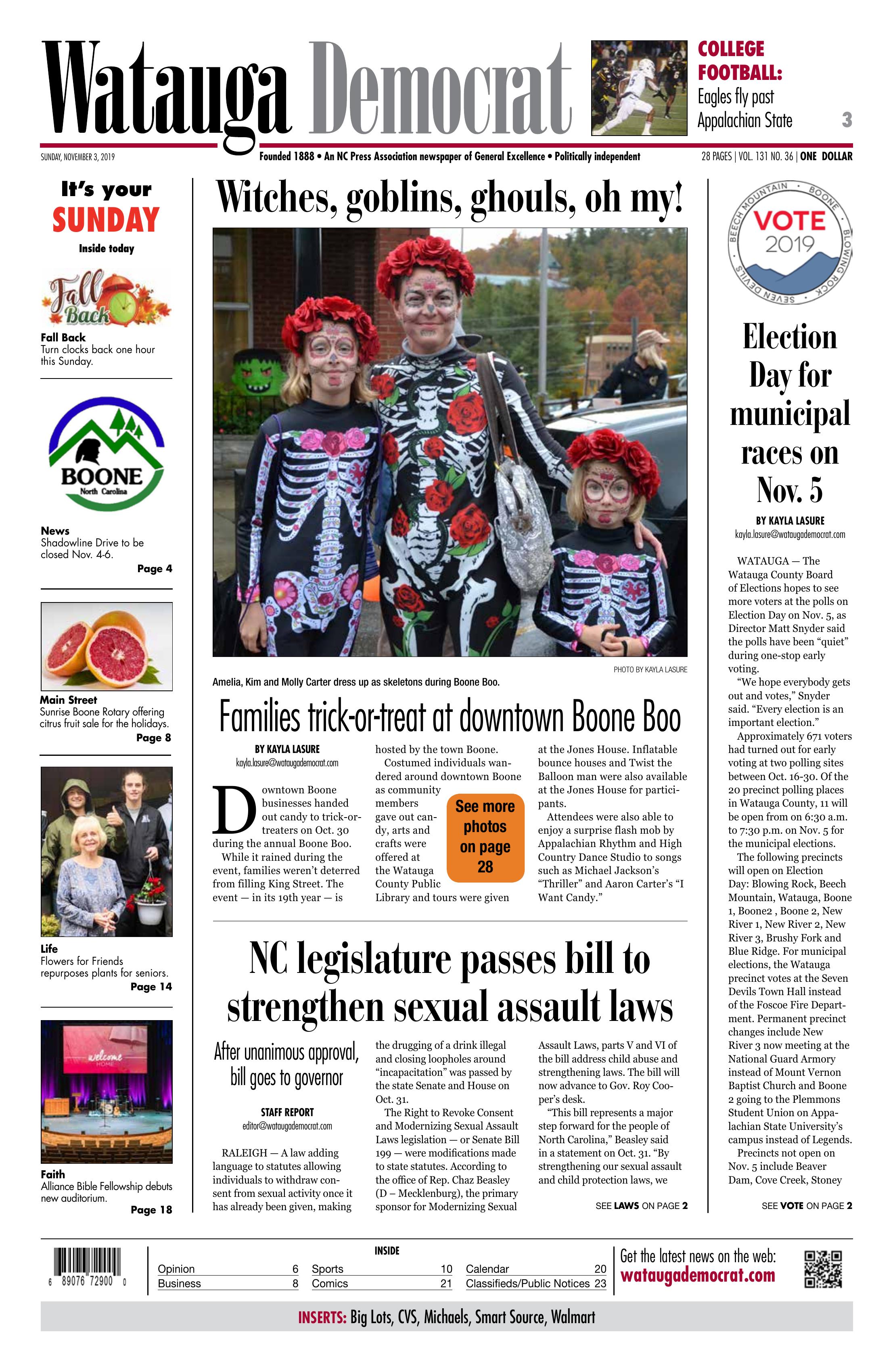