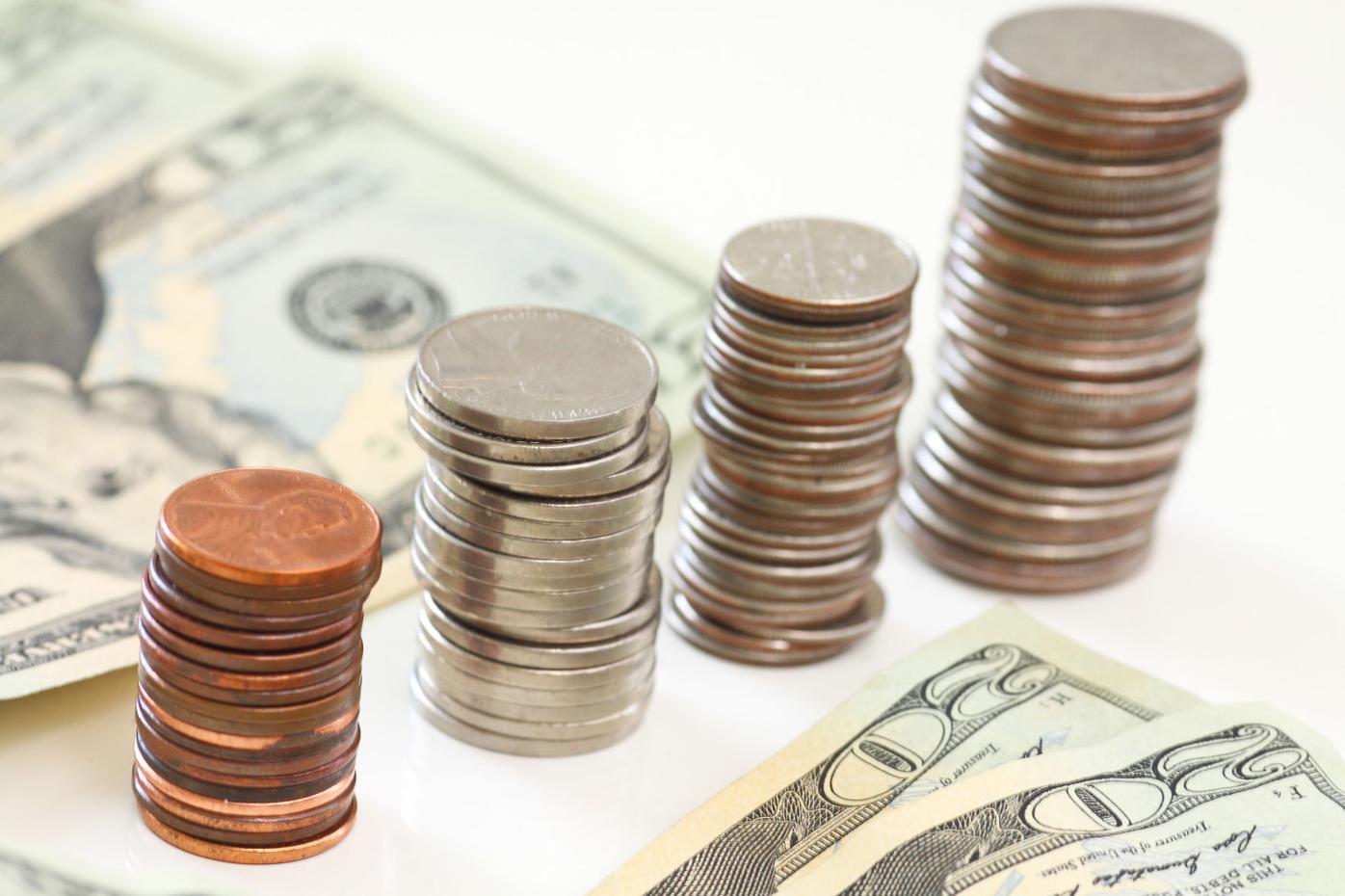 Businesses and banks have noted a decrease in the number of coins available for circulation at their locations. The decrease is due in part to the COVID-19 pandemic, and the reduction of workforce at the US Mint to protect from spreading the virus. 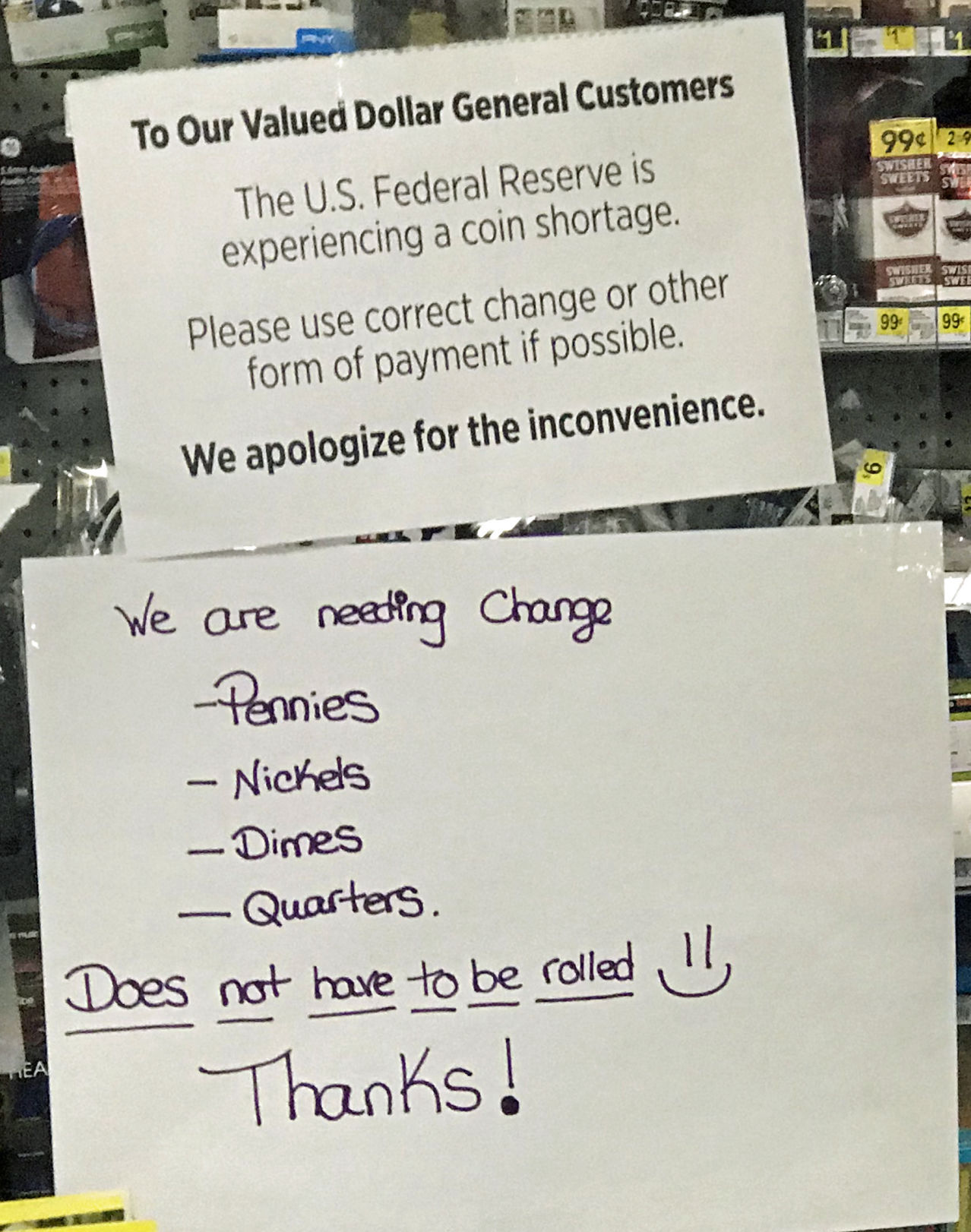 Numerous businesses have felt multiple effects of the COVID-19 pandemic, including a shortage of coins as a result of less distribution of coinage from the Federal Reserve used by banks and businesses. These signs posted at an area Dollar General location communicates the request for coins and asks for correct change to help alleviate the issue until circulation increases.

Businesses and banks have noted a decrease in the number of coins available for circulation at their locations. The decrease is due in part to the COVID-19 pandemic, and the reduction of workforce at the US Mint to protect from spreading the virus.

Numerous businesses have felt multiple effects of the COVID-19 pandemic, including a shortage of coins as a result of less distribution of coinage from the Federal Reserve used by banks and businesses. These signs posted at an area Dollar General location communicates the request for coins and asks for correct change to help alleviate the issue until circulation increases.

In multiple businesses around the county that operate via cash and coin exchange, signs have been placed informing customers of a shortage of coins and requesting the usage of correct change or credit/debit cards. The same is occurring in large cities across the United States, in places that include coin kiosks, vending machines, local convenience stores and area banks.

As the COVID-19 pandemic ramped up in the spring, the distribution of coins dropped with the surge of online shopping and stay-at-home orders across the nation. In response to the pandemic, the U.S. Mint produced less coins than usual to attempt to protect its employees from contracting coronavirus. As well, with numerous banks closing to the public or drastically limiting access to its branches and retail stores seeing less visitors through most of the spring, the reduced total of in-person customers translated into less frequency of coins being recirculated, as change instead remained in people’s pockets, in cash drawers and home piggy banks.

“With the partial closure of the economy, the flow of coins through the economy has gotten all — it’s kind of stopped,” Federal Reserve Chairman Jerome Powell said during a recent virtual hearing with the House Financial Services Committee.

More than a month ago, in a June 11 news release, the Federal Reserve announced a coin shortage nationwide, attributing the shortage to the Coronavirus pandemic.

“The COVID-19 pandemic has significantly disrupted the supply chain and normal circulation patterns for U.S. coin,” the government said in a statement at the time. “In the past few months, coin deposits from depository institutions to the Federal Reserve have declined significantly and the U.S. Mint’s production of coin also decreased due to measures put in place to protect its employees. Federal Reserve coin orders from depository institutions have begun to increase as regions reopen, resulting in the Federal Reserve’s coin inventory being reduced to below normal levels.”

During the first three months of 2020, slightly more than 3.2 billion coins were produced, the lowest level since 2013, according to CoinNews.net.

Also contributing to the shortage has been a decreasing trend in the production of circulating coins over the past five years. For more than a decade, the cost of producing pennies and nickels actually exceeded their face value: 1.99 cents for pennies and 7.62 cents for nickels, according to 2019 figures.

Federal Reserve banks and their coin distribution locations began allocating available supplies of pennies, nickels, dimes and quarters to depository institutions on June 15 as a temporary measure. The temporary coin allocation is based on historical order volume by coin denomination and depository institution endpoint, in addition to current U.S. Mint production levels.

Order limits are unique by coin denomination and are the same across all Federal Reserve coin distribution locations. Limits are reviewed and potentially revised based on national receipt levels, inventories and Mint production.

On June 30, the Federal Reserve provided an update on its efforts with the U.S. Mint to deal with the shortage of coins in circulation throughout the United States, announcing it had established a U.S. Coin Task Force to help coordinate those efforts:

“The primary issue with coin is a dramatic deceleration of coin circulation through the supply chain,” according to the Federal Reserve. “As of April 2020, the U.S. Treasury estimates that the total value of coin in circulation is $47.8 billion, up from $47.4 billion as of April 2019. While there is adequate coin in the economy, the slowed pace of circulation has meant that sufficient quantities of coin are not readily available where needed. With establishments like retail shops, bank branches, transit authorities and laundromats closed, the typical places where coin enters our society have slowed or even stopped the normal circulation of coin.

“In early July, the Federal Reserve will convene a group of industry leaders for a limited-scope, limited duration task force, the U.S. Coin Task Force, to work together to identify, implement and promote actions to reduce the consequence and duration of COVID-19 related disruptions to normal coin circulation.”

The North Carolina Bankers Association also has shared information regarding the shortage through a July 14 news release.

“The pandemic and the changes many Americans have made in the way we work and live have resulted in a significant decline in the circulation of coins. It’s not that we have a shortage of coins, it’s just sitting in our piggy banks or coin jars in our homes,” NCBA President and CEO Peter Gwaltney said. “In an effort to protect our health and safety, Americans are making many more contactless purchases with debt and credit cards and are circulating cash and coins much less. This shift in consumer behavior has resulted in a shortfall of coins in circulation and is presenting challenges to businesses across the country. The banking industry is working closely with the Federal Reserve to manage the allocation of coins in the financial system.”

The coin distribution issue from the Federal Reserve has affected local banking institutions who feel the pinch of potentially being unable to provide local business customers with the usual amount of coins they typically regularly request.

“Wells Fargo is in close contact with the Federal Reserve Bank, U.S. Mint, Financial Institution’s and Armored Carriers to coordinate efforts,” Josh Dunn, corporate communications representative with Wells Fargo & Company shared about the issue in an email. “Additionally, we have temporarily changed our item cashing and cash exchange procedures in response to this national issue.”

In ongoing efforts to try to help rectify the matter, the Federal Reserve recommends shoppers try their best to pay in exact change or use a card while the shortage persists, a message that has been echoed in several local establishments who at times have been short on coinage to provide customers with exact change as easily as before the pandemic.

Bank customers with large accumulations of coins can help by cashing out those stashes in exchange for paper money. In turn, this can help those coins circulate back into the local economy.

“Depository institutions also can help replenish inventories by removing barriers to consumer deposits of loose and rolled coins,” the Federal Reserve states. “Although the Federal Reserve is confident that the coin inventory issues will resolve once the economy opens more broadly and the coin supply chain returns to normal circulation patterns, we recognize that these measures alone will not be enough to resolve near-term issues.”

So I have a very large tin full of coins. Where can I cash them in for paper money without paying a fee?