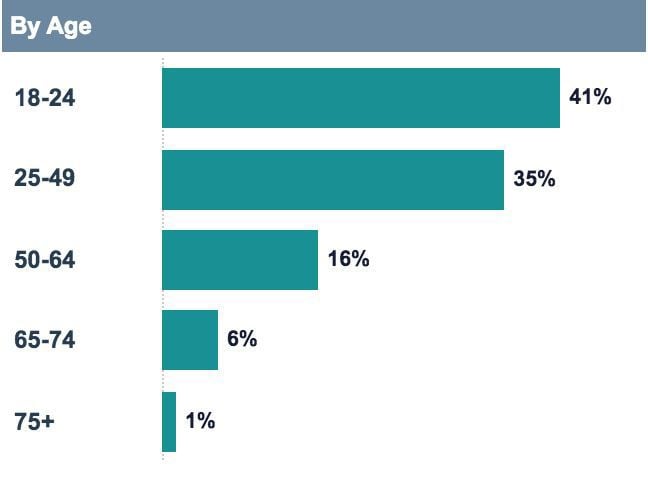 A bar graph generated by an NCDHHS dashboard depicts the breakdown of Watauga County COVID-19 cases by age group. 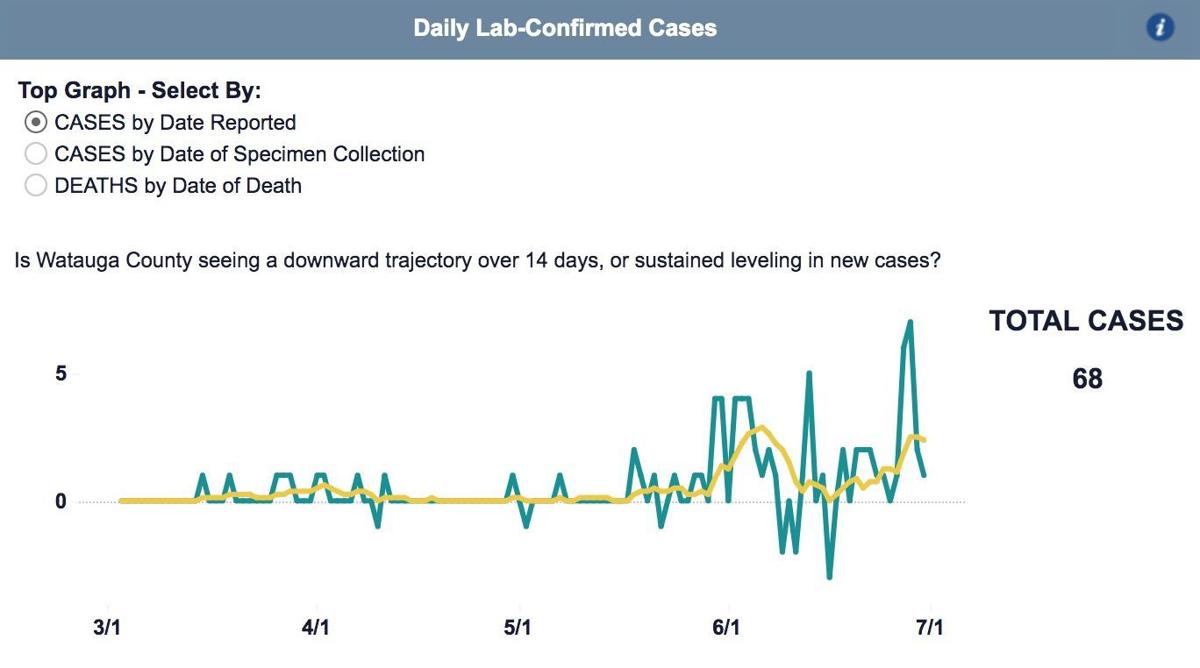 A bar graph generated by an NCDHHS dashboard depicts the breakdown of Watauga County COVID-19 cases by age group.

BOONE — Watauga County’s COVID-19 case numbers have more than doubled in the past month — from 24 cases on June 1 to 65 cases as of June 30, according to AppHealthCare. And according to the N.C. Department of Health and Human Services, three-quarters of Watauga’s cases have been in individuals younger than 50, with 40 percent coming from the 18-24 age bracket.

Statewide, cases were up to 64,670 as of June 30, according to NCDHHS, while U.S. cases had risen to 2.6 million, according to Johns Hopkins.

Twenty-seven of the 65 cases in Watauga were still active as of June 30, according to AppHealthCare’s COVID-19 data dashboard. The count only includes those who are permanent residents of Watauga County, and not those who have tested positive while working or visiting here but reside elsewhere. According to AppHealthCare (the regional public health department), 39 people who are not residents of Watauga, Ashe or Alleghany counties have also tested positive.

“We have seen an increase in confirmed cases for Watauga County in recent weeks,” said Melissa Bracey, spokesperson for AppHealthCare. “We believe this increase is happening for multiple reasons. People are moving around more now that restrictions have been eased, so that is giving the virus more opportunity to spread.”

Bracey said that anyone who is a close contact to a known positive case is strongly encouraged to be tested during their quarantine period to better identify cases that may be asymptomatic.

“Testing close contacts is an important public health strategy so we can identify where the virus is and hopefully break the chain of transmission,” she said. “The testing of close contacts (15 minutes or more within six feet or less to a known positive case, per CDC definition) has led to more confirmed positives, including identifying individuals who have been asymptomatic.”

Asked if groups of cases can be linked to any specific events or locations, Bracey said, “There is not one particular event or location we have determined to be a cause of the increase in cases for Watauga County, but rather, multiple incidences of people who have had travel history or have been exposed through social gatherings. We know there is community transmission occurring here, in North Carolina, and in other states.”

According to demographic data on Watauga County’s cases from the N.C. Department of Health and Human Services (which at times posts a different count than AppHealthCare and on June 30 had Watauga at 68 cases), 41 percent of the county’s cases (28 cases) have been in individuals between 18 and 24 years old, with another 35 percent (24 cases) between ages 25 and 49. Sixteen percent, or 11 cases, were in patients between 50 and 64, 6 percent (four cases) were ages 65-74 and 1 percent, or 1 case, has been in an individual 75 or older.

By gender, 64 percent of cases have been in males compared with 36 percent in females.

“We continue to encourage the community to show their love and follow the 3Ws consistently. If you leave your home, follow the 3Ws and wear a cloth face covering, wash your hands often or use hand sanitizer and wait 6 feet from others,” Bracey said. “These actions will help to slow the spread of COVID-19 and protect you, your loved ones and the community. If you or someone you love are at high risk, we encourage you to think about limiting your exposures in large gatherings or crowds where it can be difficult to socially distance, and if you have attended a gathering or event, you should consider being tested even if you do not have any symptoms.”