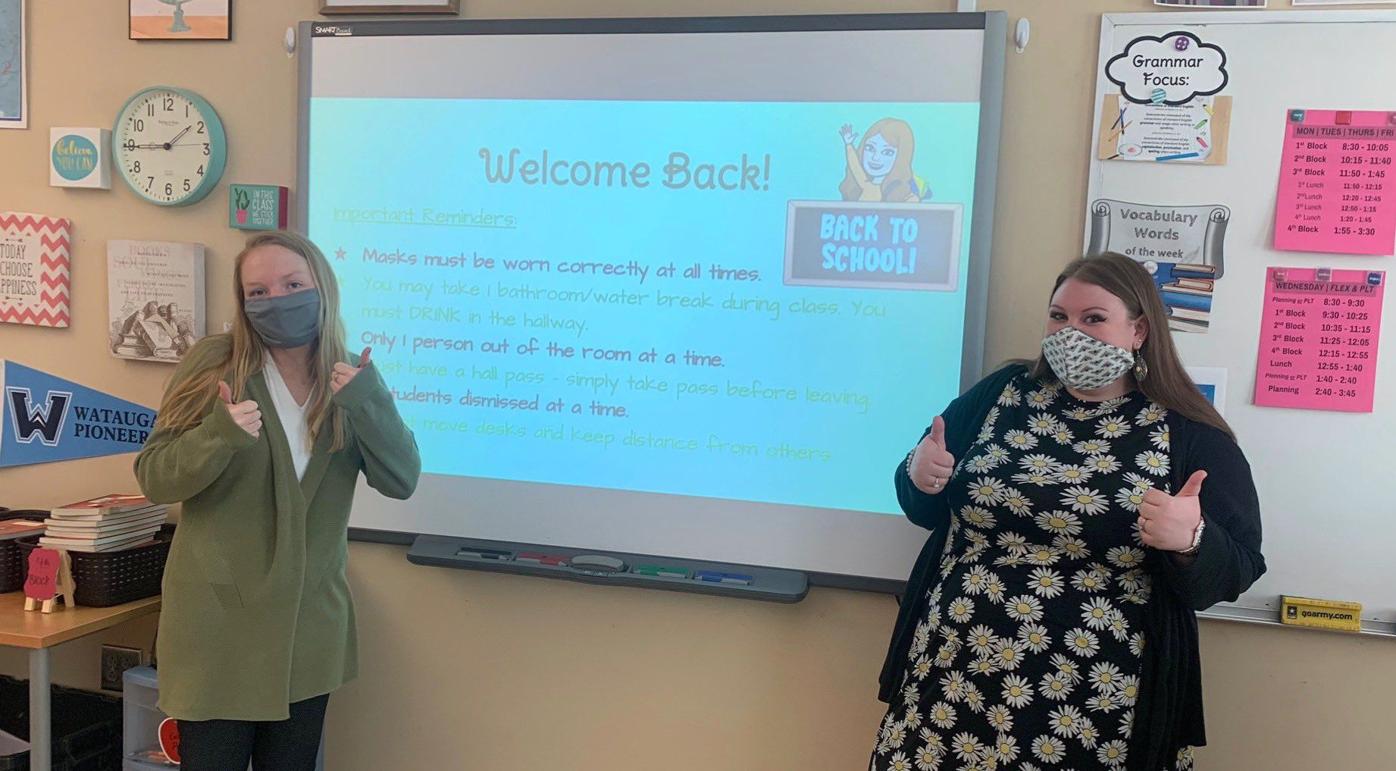 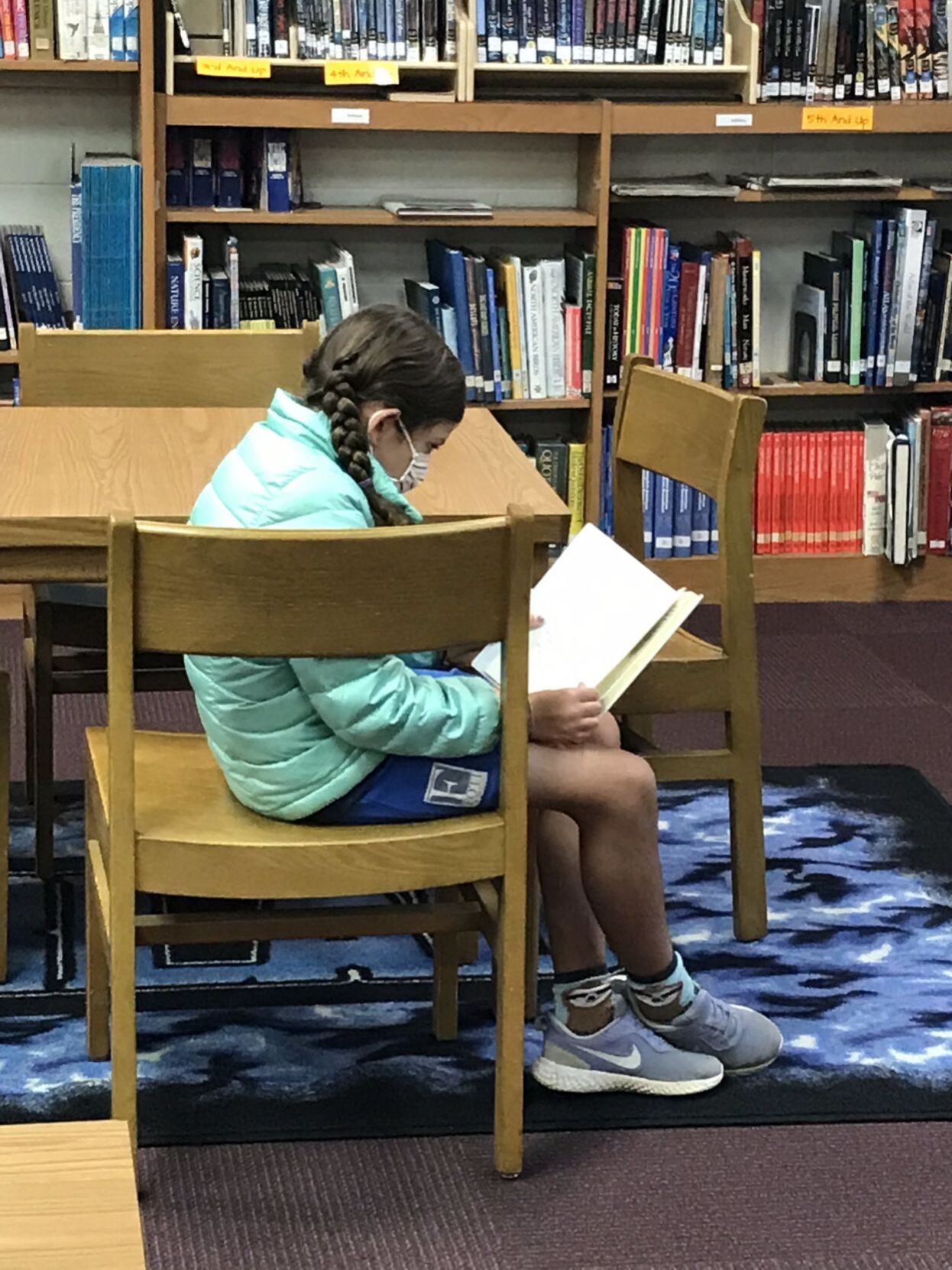 BOONE — Months of planning have led up to Watauga County Schools allowing students in all grade levels to return to in-person learning starting Oct. 19.

The school system welcomed K-3 students starting Oct. 5 to allow for a gradual approach of beginning screening procedures for those entering school buildings and reacclimating students and employees into school. All grade levels are operating under a 2x3 flex plan — a hybrid in-person and remote learning schedule.

While not all WCS students returned to school on Oct. 19, it was the first time that all grade levels were being served in person since March 13, when the beginning of the COVID-19 pandemic rendered schools unable to operate in buildings.

As students returned on Oct. 19, there was a sense of anxiety and concern about all the safety procedures and how well students would adapt to different circumstances, according to WCS Superintendent Scott Elliott. But he said so far students have been great and seem relieved to be back in school. Concerns— such as students wearing their masks and keeping distance from each other — so far had not been major issues, according to Elliott.

Elliott said Oct. 19 was one of the most positive days of school that he could recall.

“There was a positivity and energy in our schools unlike anything I can ever remember,” Elliott said. “Seeing so many students coming through the doors and getting back to in-person instruction with the teachers, at least two days a week, is a great accomplishment for all of our staff.”

Elliott said he received emails last week from several parents who were concerned about a recent increase in community case numbers. The school system reported three new positive cases among students and two among employees during its COVID-19 update on Oct. 16.

“Even though the numbers were starting to come back down last week, some still felt uncomfortable with their children coming back to school,” Elliott said. “Some of the parents just wanted an update on the safety precautions being put into place, and other parents expressed a desire for their students to not return in person.”

Elliott also heard from quite a few parents who encouraged school officials to continue moving forward with reopening plans. He said some parents expressed a desire for K-5 students learning in person five days a week. Additionally, several parents have voiced that they feel comfortable with the precautions being taken at school, but are concerned that other community members are not taking safety precautions outside of school. Elliott said he’s growing concerned about this as well as school leaders are seeing more instances of gatherings outside of school where precautions are not being taken.

“The students in one social event then go on to join multiple other social events or organized activities, and then it just becomes a large chain reaction of positive cases and close contacts,” Elliott said. “As a dad of two kids myself, I know our children want to get back to life as normal, but we cannot pretend that everything is normal. It’s not, and it’s not going to be for a long time. We all take risks in everything we do, but I simply ask that parents and leaders of youth organizations please take appropriate precautions to minimize large gatherings outside the home and to encourage our children to wear their masks.”

“There is quite a range of concerns and needs,” Elliott said. “This is not a popularity contest by any means, but we are focused on doing everything we can to support our students under these circumstances.”

On Oct. 12, Elliott mentioned that bringing back K-3 first allowed school officials to learn ways to streamline the logistics of the car rider lines, as students are asked a list of questions and have their temperature taken before entering schools. Staff also worked through some bus assignments in order to comply with the minimum distancing requirements.

The most prominent issue WCS employees faced on Monday was continuing to work through the screening procedures in the car rider lines, Elliott said. As it’s a new process for everyone involved, the operation went a little slowly at first. But by the following day the process ran more smoothly, he said.

Elliott conducted screenings and took temperatures of Watauga High School students in the car line on Oct. 19. With temperatures in the 30s that morning, he said school officials learned that the handheld thermometers have to be kept warm so it does not malfunction. At the same time, students who were riding in cars where the heat was on or where several students were together were showing temperatures much warmer than was accurate, he said. The following day, more cars had their heat turned off and the windows were rolled down to ensure that student temperatures were accurate, according to Elliott.

“I think parents and students will quickly become accustomed to the screening procedures and things will move more quickly,” Elliott said. “I encourage everyone to give themselves plenty of time to arrive at school. Parents should always screen their children at home prior to sending them to school so that no sick children are entering the school.”

The Watauga Board of Education has previously stated that the board and administrators will be evaluating school operations every two weeks. Elliott said school officials continue to monitor local health metrics, which seem to have improved over the last week. He added that while the largest number of cases in the area continues to be among the 18- to 24-year-old age group, officials continue to see cases of infections spreading among families and in small social gatherings.

Elliott said the biggest challenge facing WCS in its efforts to keep schools open is the ability to keep staff healthy and minimizing the number of employees who have to be out of work due to contact tracing. WCS has hired additional long-term substitutes in order to have staff on hand to fill in for teachers who are absent. Central office staff are also filling wherever needed.

“For example, this week I am helping prepare and serve food in one of our school cafeterias due to the absence of staff,” Elliott said. “Our director of child nutrition and her assistant are also in one of our kitchens every day for the next two weeks to cover for people who are absent. Keeping our staff and students healthy is our top priority, and we are doing everything we can to keep our schools open.”

Elliott said most K-8 students are eating their meals back in their classrooms, so only the students who are eating school meals walk to the cafeteria to pick up meals and then return back to the classroom to eat. At the high school, the large tables that did not allow for six feet of separation were replaced with smaller tables that allow students to spread out, according to Elliott.

He added that high school students have been issued bar coded lunch cards allowing them to scan their cards at the cash register without having to touch a keypad. Additionally, the school now has four lunch shifts to allow for smaller numbers in the cafeteria at one time while keeping students distanced.

School buses are running full routes at all the schools, Elliott said, but bus transportation for students is also operating a little differently. The most notable difference is that WCS is required to reduce the number of students on each bus so that there is only one student per seat except for allowing family members to sit together.

Elliott said the school system had one bus that was too small for the number of riders, so a larger bus was placed on that route. Students on the buses are required to wear their masks at all times; Elliott said so far that seems to be going well.

BOONE — As a portion of Watauga County Schools students were allowed to enter classrooms on Oct. 5, school officials continue to make continge…